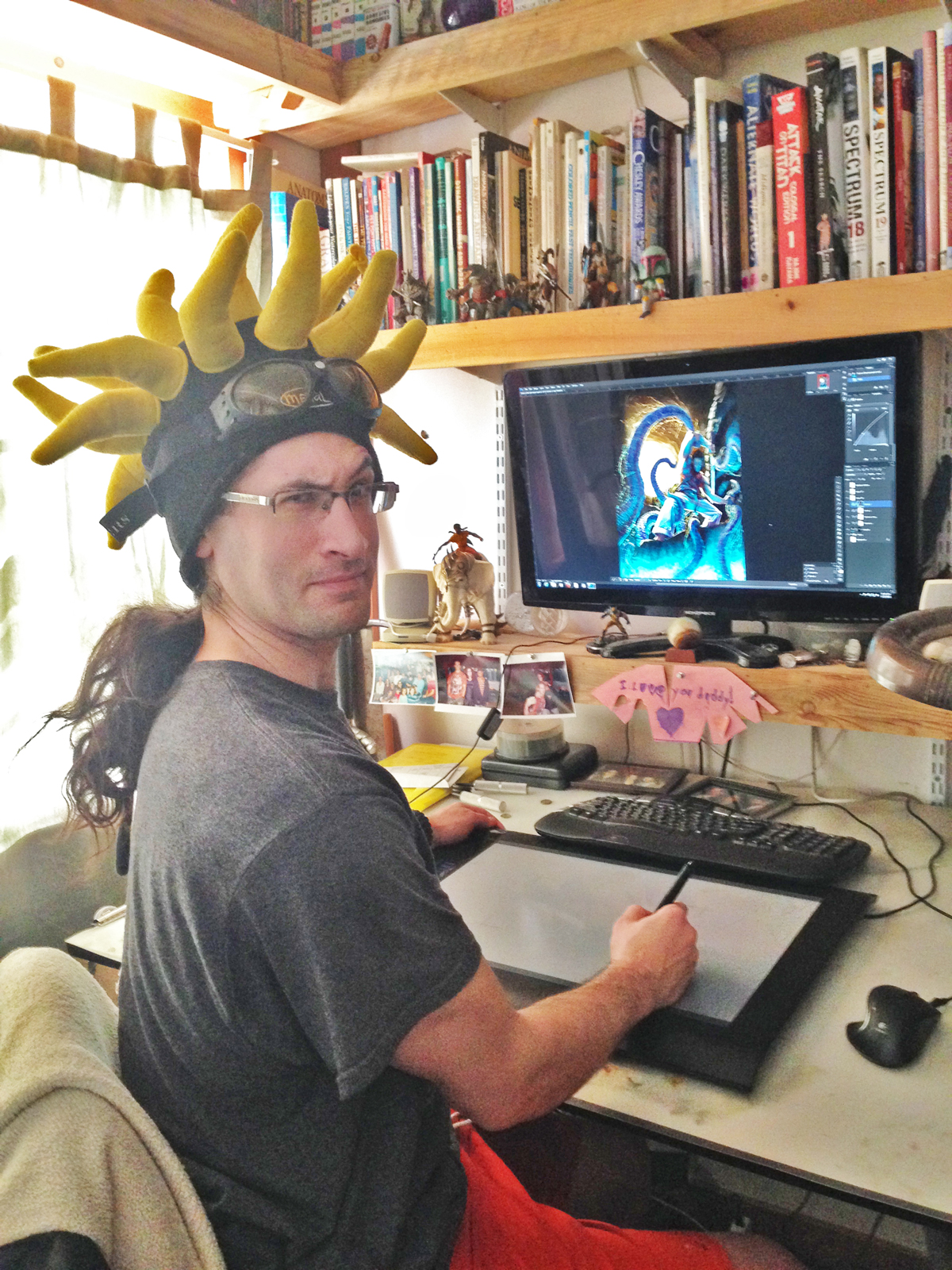 The artist hard at work.

The Short Version (for those short on time):

Born in 1977 (after his overdue mother went to see the circus) and raised in Raynham, MA, Toby Gray is a stay-at-home father of 3 boys, a husband, an artist, a practitioner of Shotokan Karate (since 1995), an exercise geek, a Ninja Warrior, an Eagle Scout, a lover of hiking, camping and kayaking, a snowboarder, a wood-working enthusiast, a comic book fan, an introvert, at one time a pure-bred cat breeder, and above all else, a dreamer.  He has been wearing shorts year-round (in MA and NH, not some Nancy warm locale) since 1991 (with a handful of exceptions, like brief job requirements and snowboarding) all because of a bet gone awry. He also really likes cephalopods and frequently hangs out with a monkey with a plunger on his head.

The Long Version (for the bored with nothing better to do):

Toby has been doing “detailed” drawings since the age of 2, according to his parents (whom he has no reason to distrust). He is a man with many interests, but art and the creative process have been defining characteristics throughout his life. His wonderful parents nurtured and encouraged his art making and weirdness, helping him grow into whatever it is he is now. The journey has been anything but direct.

Toby spent much of his youth being teased and bullied by his peers for his nerdish tendencies and geeky pursuits.  This lead him to spend even more time hiding away in imaginary worlds in his head, where he could be whoever or whatever he wanted and travel to places that did not exist.  (He spent so much time there, and felt so ostracized by his classmates, that by fifth grade he briefly convinced himself he was actually an extraterrestrial…true story). Throughout it all, Toby continued to try to make the imaginary worlds and characters in his head tangible through art, and also stumbled into a side passion of exercise and fitness, hoping to transform his scrawny frame into that of a living comic book super hero so that his tormentors would leave him alone.

Bridgewater-Raynham Regional High School brought some relief from the bullying and a realization that being weird was okay, in large part thanks to his beloved art teacher, Mr. Phaneuf and the endless love and support from his family. He found friends and peers that understood him, which, along with his new obsession with working out, bolstered his self-esteem.  Aside from deciding he was invulnerable for a few years, he believed that if he could dream it, he could achieve it.

Studying painting and illustration at UMass Dartmouth seemed like a dream, at first. Spending his days honing his skills because he actually was required to and not just for fun was wonderful. However, as the months and years progressed, he began feeling more and more lost.  He was no longer “the artist” in the class, he was one of many. Something that had made him unique and was a defining characteristic and a source of pride was now nothing special in a sea of talented young artists. Self-doubt reared it’s ugly head, and with graduation drawing nearer every month, he struggled to nail down just what it was he wanted to do with his art.  Depression set in again, but with the ever-present love and support of family, some amazing friends, and the mental discipline achieved through practicing a martial art, Toby managed to graduate in 1999.

The next 2 years were basically limbo.  To make some money and start paying back loans, Toby, the introvert, made the brilliant decision to take a job in retail at a high end fashion boutique in Boston (and barely picked up a pencil during that time). His co-workers were great, but dealing with the public, especially the rich and famous, was not (he still has the occasional nightmare about working in retail to this day). Never wanting to let people down, Toby struggled to work up the nerve to quit, but he finally did in early 2001. He had teamed up with his best friend from college and a new best friend, who happened to be a writer, to start working on a comic book.  They finished one issue and submitted it once, but it was rejected and the project fizzled.  The trio then took the next logical step and decided to make a short movie, which still isn’t quite finished, but was a blast to film way back then.

Also in early 2001, Toby met his future wife at the dojo they both trained at (and he only kicked her in the head once).  After moving in together, Toby attempted to start making some of his art dreams a reality. In 2003, as some of his goals and ideas were starting to become clearer to him, he had his first son. Being that he was an unpaid artist working part time at UPS unloading trucks, and his wife had an actual, stable, real job, Toby undertook the roll of stay-at-home dad, placing his dreams on hold for the next several years.

Two more boys followed the first, and by 2012 they finally were all in school at least part time, allowing Toby to jump back in to his cob web encrusted art dreams. Not much art happened in those intervening years due to the constraints of a stay-at-home dad (who, for some crazy reason, also decided to build an addition to their home to accommodate the kidlets…he’ll finish it one of these years). There were a lot of frustrations and self-doubts, but Toby continued to dream.

As he was getting his studio reorganized and was beginning to plot out some of the stories living in his head in late 2011, Toby’s loving wife handed him a Wacom tablet and said “here, learn to use this” and his switch from traditional media to digital began.

While working on an original graphic novel, a paid illustration opportunity fell into his lap near the end of 2013. By the end of 2014, in between husband, father, and Cub Scout Den Leader duties, he had illustrated 4 book covers for author L.S. Gagnon’s Witch Series, and in the process got a lot more comfortable with the digital art process. And hey, it was pretty nice to get paid to make art.

Quite a lot of other “stuff” has happened since 1977, (like the years spent on the path to Eagle Scout, running the hurdles in high school, growing up at a beach in RI with his family during the summers, earning 2 black belts from 2 different senseis in Shotokan, getting married, raising kids, building an addition, and competing in the American Ninja Warrior Northeast Regional Tryouts in 2012, to name a few) all of which, big and small, have shaped who and what Toby is today. He doesn’t know what the future holds, but his dreams are big, and with his wife and family at his side he’s more certain than ever that he can make them reality.