I was thinking about doing that PMD retrospectivey thingy post, but as I was combing through old sketchbooks and accumulating a ton of photos that I need to edit before posting, I realized I don’t have copies of some of the cards (and possibly envelopes) I’ve made over the years. I know I don’t have an image of the card I made for my best friend Jorj when he got married several years ago. I have a sketch of a birthday card but no idea who it was for and I have no copy of the finished card. So, if you’re out there and you’ve received some custom PMD art of some kind from me, and you happen to still have it (and why would you not have it? It’s Plunger Monkey!), would you please send me your best possible photo of it (or better yet a scan if you have that capability)? I’d appreciate it, and if you want I’ll give you credit for your efforts when I finally put the post together.

Anyway, while I was digging up PMD sketches, I stumbled on some sketches for some other “old” art, so I decided today’s post would be about those. The featured image is a piece of concept art, done in pen and ink on a Blue Line Pro 11×17 comic page (this is the scanned and cleaned up version), for good ol’ Wilhelm. Yes, the post-apocalyptic tale of the struggle between technology and nature that I’ve been kicking around my brain for almost 2 decades now. I will eventually sit down and do something with it other than notes and sketches and the odd bit of concept art. Because if I don’t…my head will explode and I’ll probably never sleep right.

Some other notes on this page reference some other concept pieces I’ve recently posted, like the flying whales and the character Ostogri.

This particular character was to be the last of his people, a people who had a near symbiotic relationship with their “pet” dragon-like creatures. His culture was wiped out by the surviving segment of humanity that turned to technology to deal with the world wide disaster. 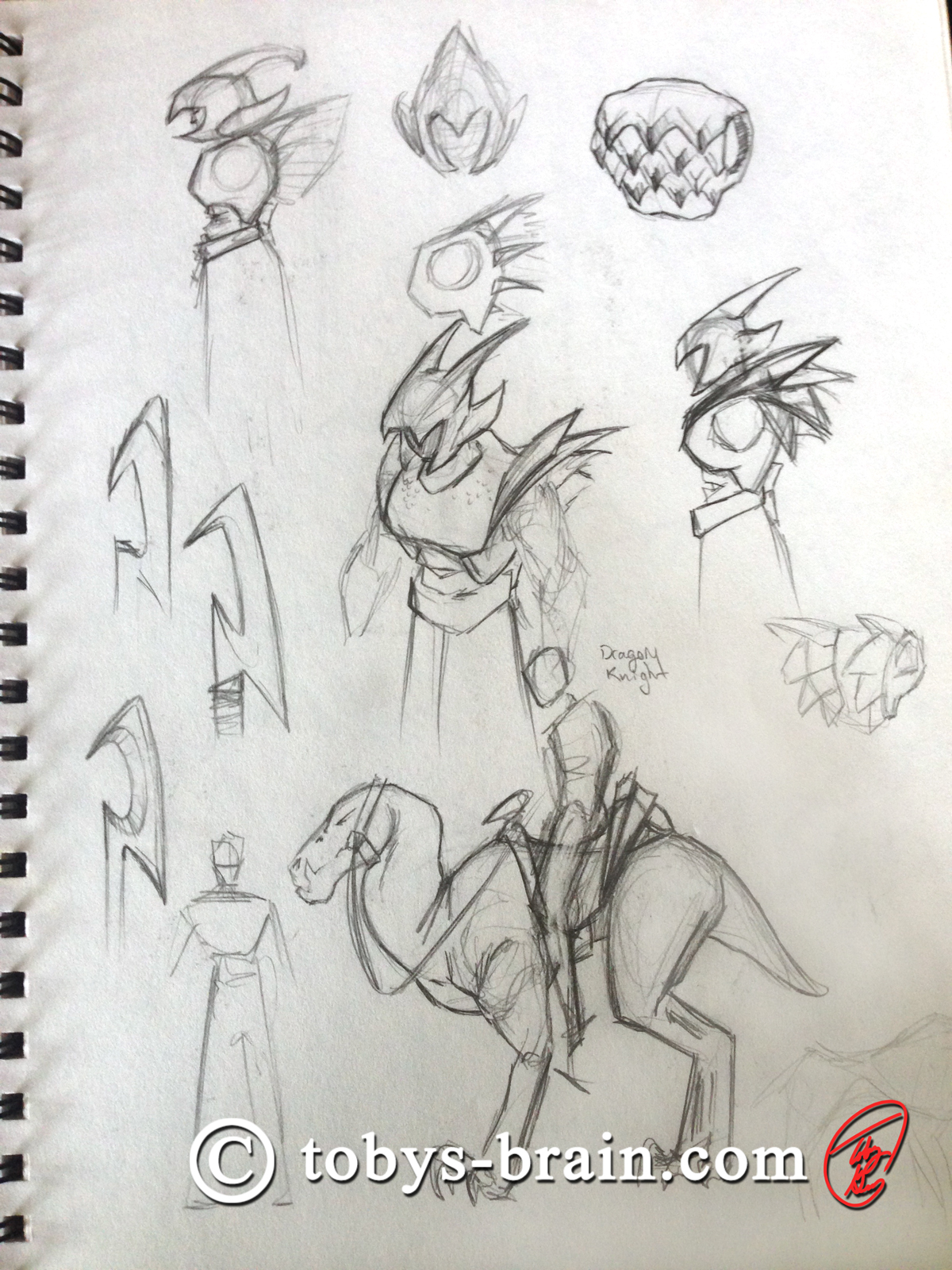 I’m not sure how practical this armor would be, but I like the look of it. I need to develop it some more.

As with most Wilhelm related things I’ve posted, this character has gone through some changes. Namely, it’s a woman (I’ll have to redraw this image to reflect that, I suppose).

I also unearthed some thumbnails and sketches for my first crack at Ohrim vs. The Cave Squid. 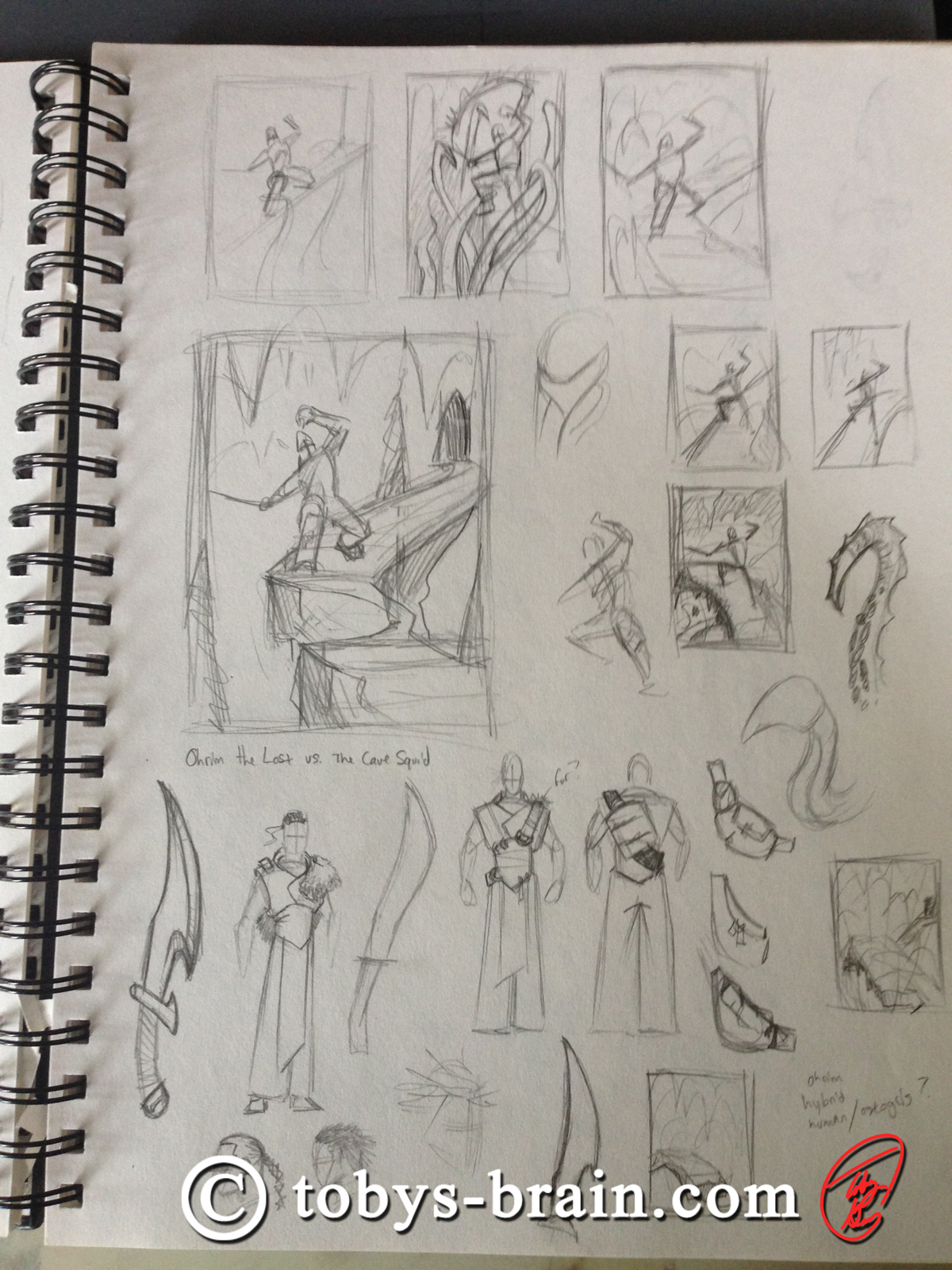 These sketches were done at least 10 years before the current finished version.

I was planning a slightly different costume than the simpler, more practical outfit I wound up with. I also remembered that this was originally titled Ohrim The Lost vs The Cave Squid, Ohrim has amnesia. 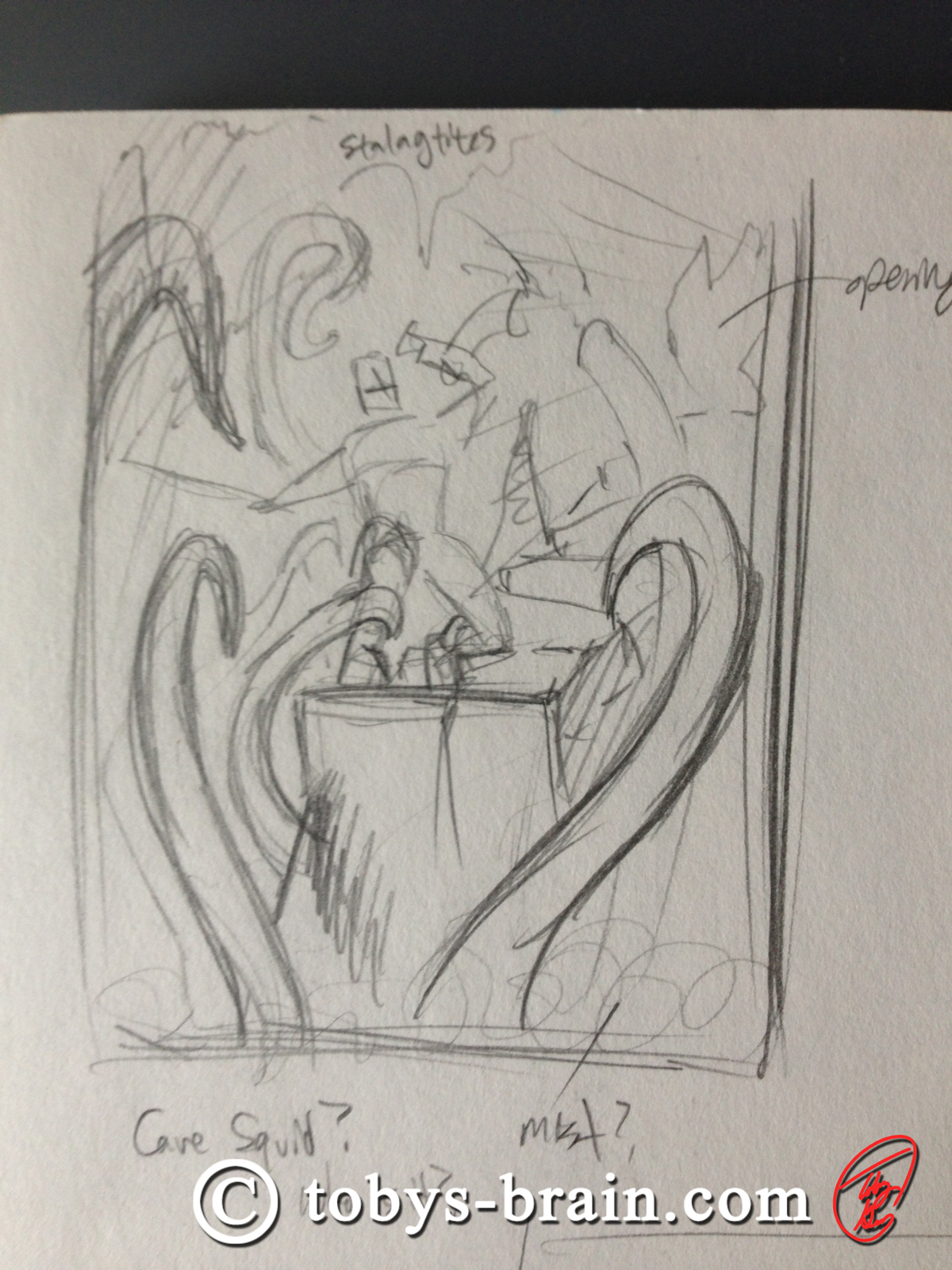 Some differences from the finished product, but the overall feel was there from the beginning.

I do have the original, unfinished attempt I made at the same time I did these sketches, but it’s not worth looking at, honestly. Maybe if I become uber famous and someone wants to publish a retrospective (I seem to have taken a liking to that word…I think I’m now sick of it) of my life and work someday, that original version might see the light of day in all it’s unfinished “meh” glory.

Anywhat, remember, if you have some of my PMD art, would you be so kind as to send me the nicest digital copy you can? Much appreciated.