We’re just over a week into November, so I guess I should finally get around to this here wrap up post about Inktober 2018. I believe (according to the art in my files) that my first foray into Inktobering was in 2015. It was a fun little challenge put out by comic artist and illustrator Jake Parker years prior. The idea was to improve one’s inking skills by doing one ink drawing a day (presumably on top of whatever other projects one might have). I don’t know if it was from the beginning or not, but at some point he started posting official prompt lists to give everyone a starting point each day. My first year doing it I had my own agenda: in addition to wanting to get better at inking (since I’ve always wanted to draw my own comics), I wanted to get better at drawing faces. The easiest solution to that was to do self portraits. I wasn’t sure how I would keep up, as I always have lots of distractions going on being the stay at home dad, but I ended up doing 31 ink self portraits that year. I did miss a day here and there, but I made sure to go back and make up for it.

That snowballed into a much bigger project, one in which I was trying to cartoonify myself. My long standing project, Revery, is a comic that stars myself adventuring through a dream world, so I wanted to get better at drawing myself without always having to rely on a mirror or setting up pictures of myself. After about 100 drawings, I started getting bored (there’s only so many different faces I can make at myself), and in the process of trying to interject something fun, I wound up dovetailing into It’s Plunger Monkey Dynamo Time.

I don’t remember Inktober 2016, but a quick search of my site gives me the impression I drew IPMDT panels as well as a few random moleskin sketches. I could probably jog my memory by digging through my sketchbook from that time frame (I always date my sketches, and when I’ve drawn panels during Inktober I make note of that under the date), but I don’t feel like it. So there.

I completely missed Inktober 2017, as that was when my son wound up in the hospital and diagnosed with Type I diabetes. I don’t think I drew anything for a month or more as we all adjusted to the new normal and tried to wrap our heads around this new, manageable but constant stress in our lives.

This year I was in a better place to have a go at Inktober 2018. I wasn’t sure if I’d get all 31 days, in fact, I was sure I wouldn’t. My goal was to draw as many days as I could, knowing how uninterruptible my life generally is and the fact that I don’t usually have time to draw on weekends. My wife thought differently and practically forced me to draw on the weekends. I drew IPMDT panels on weekdays, and then “quick” drawings using the prompt list on the weekends. I missed a few actual days of drawing, but I went back and made up for it. The 31st was a weekday, so it was a panel day. However, I really felt the need to finish up the prompt list, so I did one more drawing, bringing my Inktober total to 32 drawings. I’m pretty happy about that. I’m hoping to maintain a bit of that steam, now that I don’t have a “reason” to be that consistent. I liked churning out panels and strips, but I wasn’t able to spend much time on some of the other projects waiting in the wings (more shirt designs, Revery, Inside Toby’s Brain, 10 Things…). In the week since Inktober closed, I’ve mostly managed to keep the pace.  I have had to trade off working on a panel a day to work on some other things (like the current book cover commission), and I’ve missed a few days completely because of “life”, but I have plenty to keep me busy in the studio. As is often the case, the hard part is choosing which project to focus on on any given day, which isn’t a bad problem to have. I’m certainly familiar with the alternative, and I don’t want to be back there ever again.

Anyway, enough with the words. Here’s all the non-IPDMT Inktober offerings for 2018. 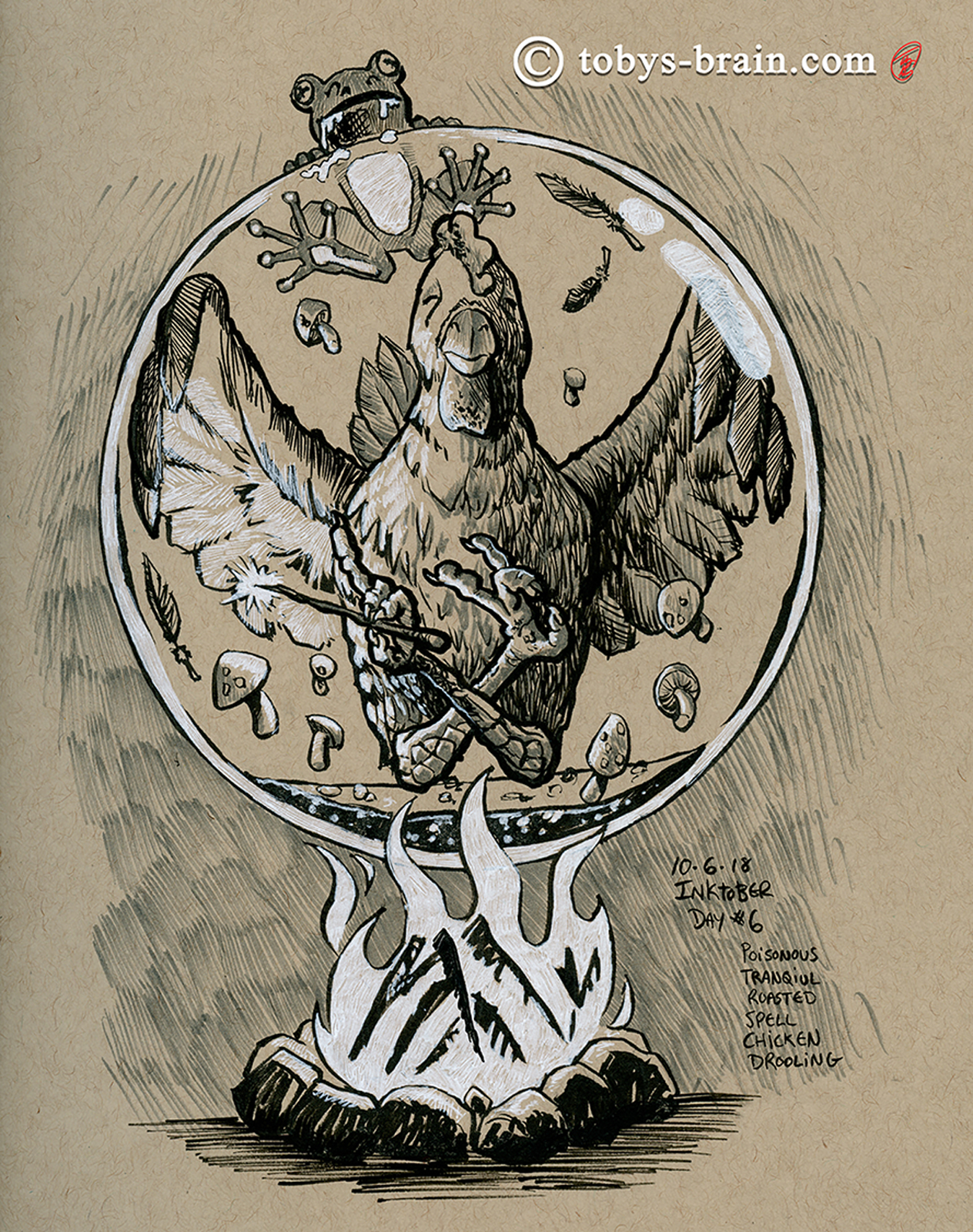 Prompt-based Inktober drawing: Poisonous, Tranquil, Roasted, Spell, Chicken, Drooling. This was my first crack at the official prompts, after spending the week drawing IPMDT panels. I decided to mash them all together into a single illustration, which was challenging but fun. 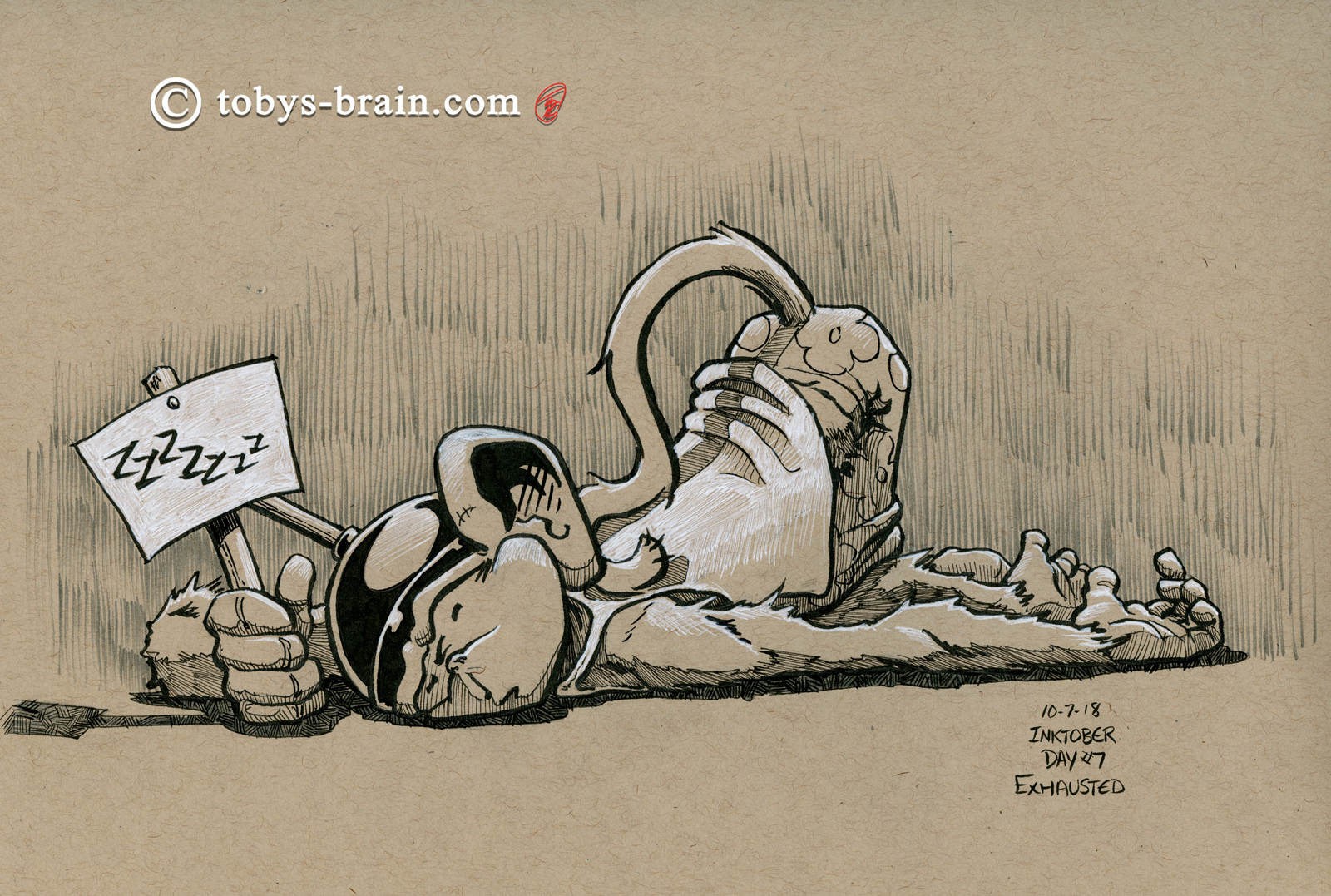 Prompt-based Inktober drawing: Exhausted. I was originally going to draw myself in a similar pose, but thought it would look just plain weird. It works much better with my alter ego. 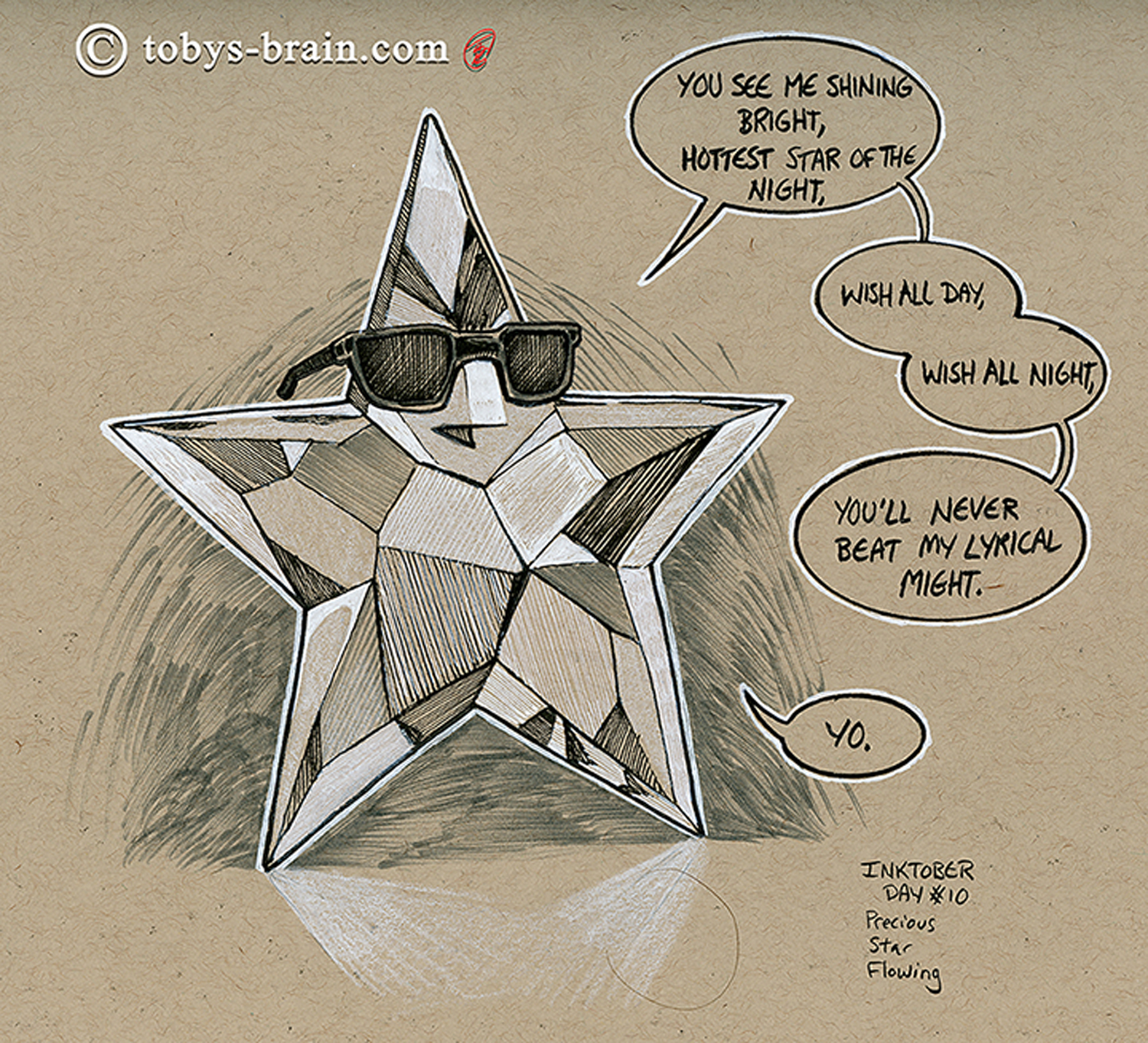 Prompt-based Inktober drawing: Precious, Star, Flowing. I’ve been told this would make a good shirt. It might be fun. I have mixed feelings about the way this turned out, diamond is a tough (for me) material to replicate in ink. I know I’ve seen others do it beautifully, but I had a hard time wrapping my head around it. No fear of my abandoning drawing to become a song writer, though. 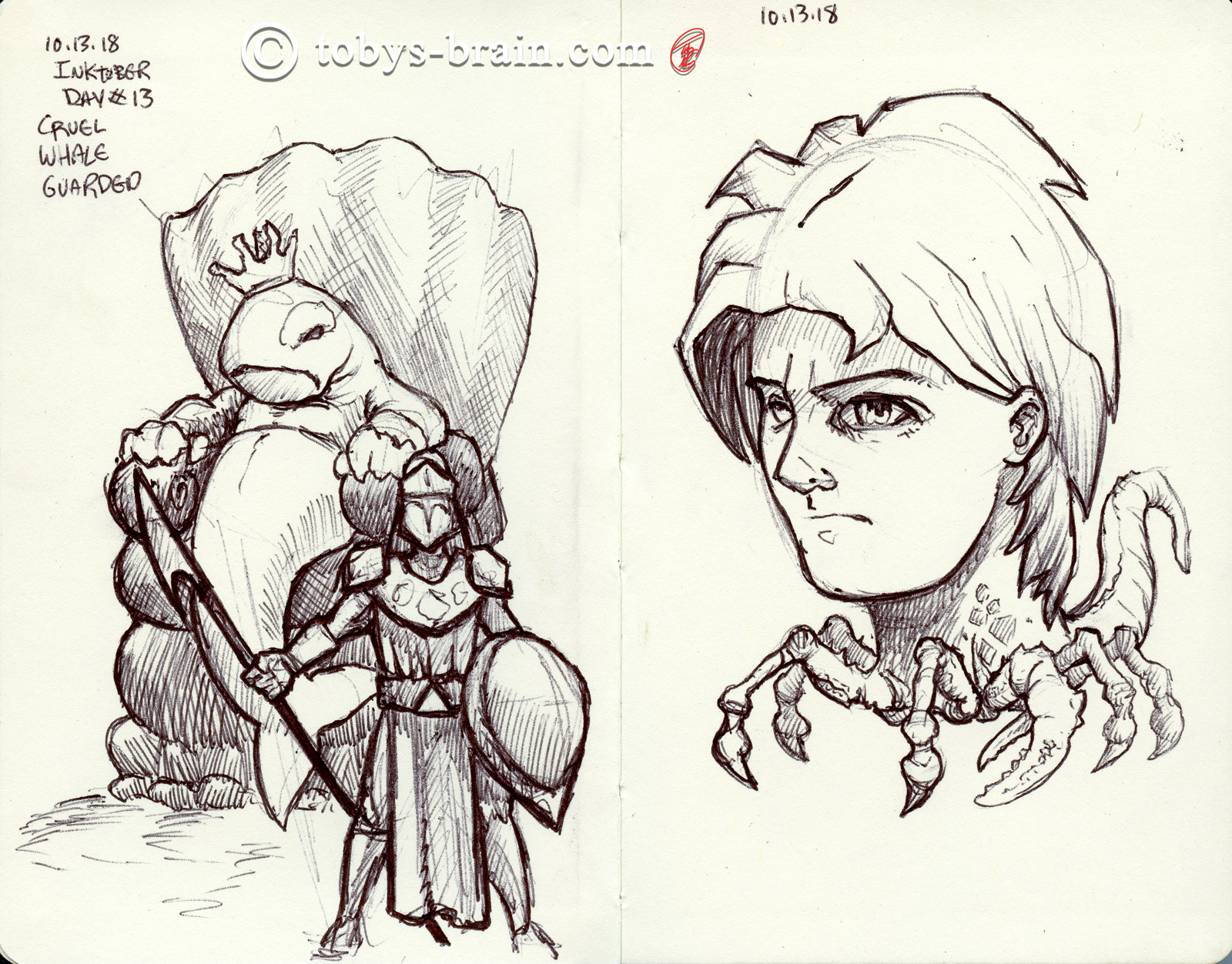 Prompt-based Inktober drawing: Cruel, Whale, Guarded. Also…head crab…guy. Thing. These were drawn in 30 degree temps while camping. It took a while for the ink to start flowing. I wasn’t sure I was going to get a drawing in that day, since not only were my pens not cooperating at first, but it was a scout campout, so I usually have other things vying for my attention. 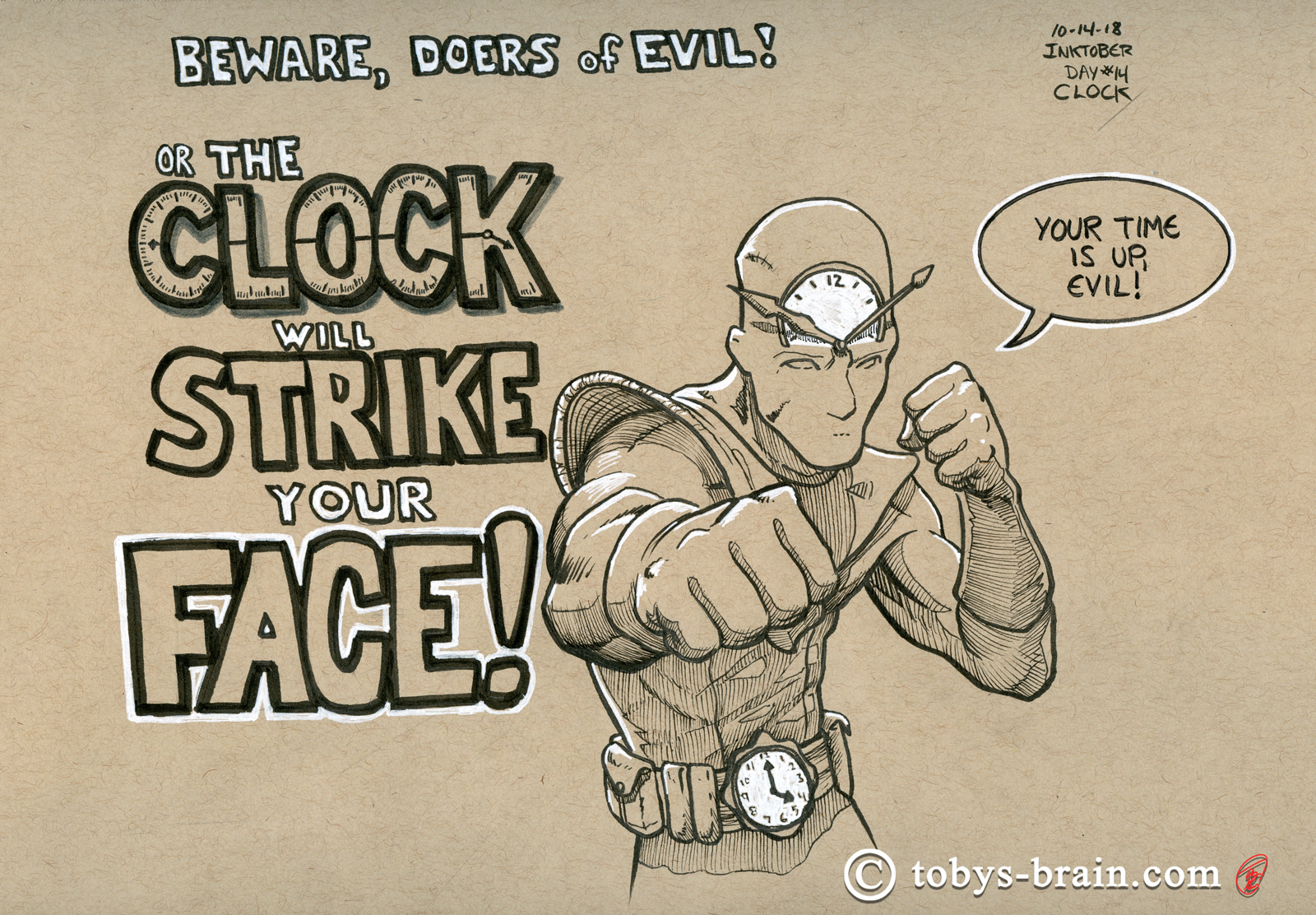 Prompt-based Inktober drawing: Clock. This super hero has a future…There was no way I was going to stick with “normal” for any of these prompts if I could help it. This character came out of no where, which is a really fun experience. My first reaction to “clock” was some guy getting punched in the face. When I started trying to figure out what one of the guys was wearing, a new super hero emerged. I already have some ideas for his powers and gadgets, not entirely sure where he’s going to show up yet. 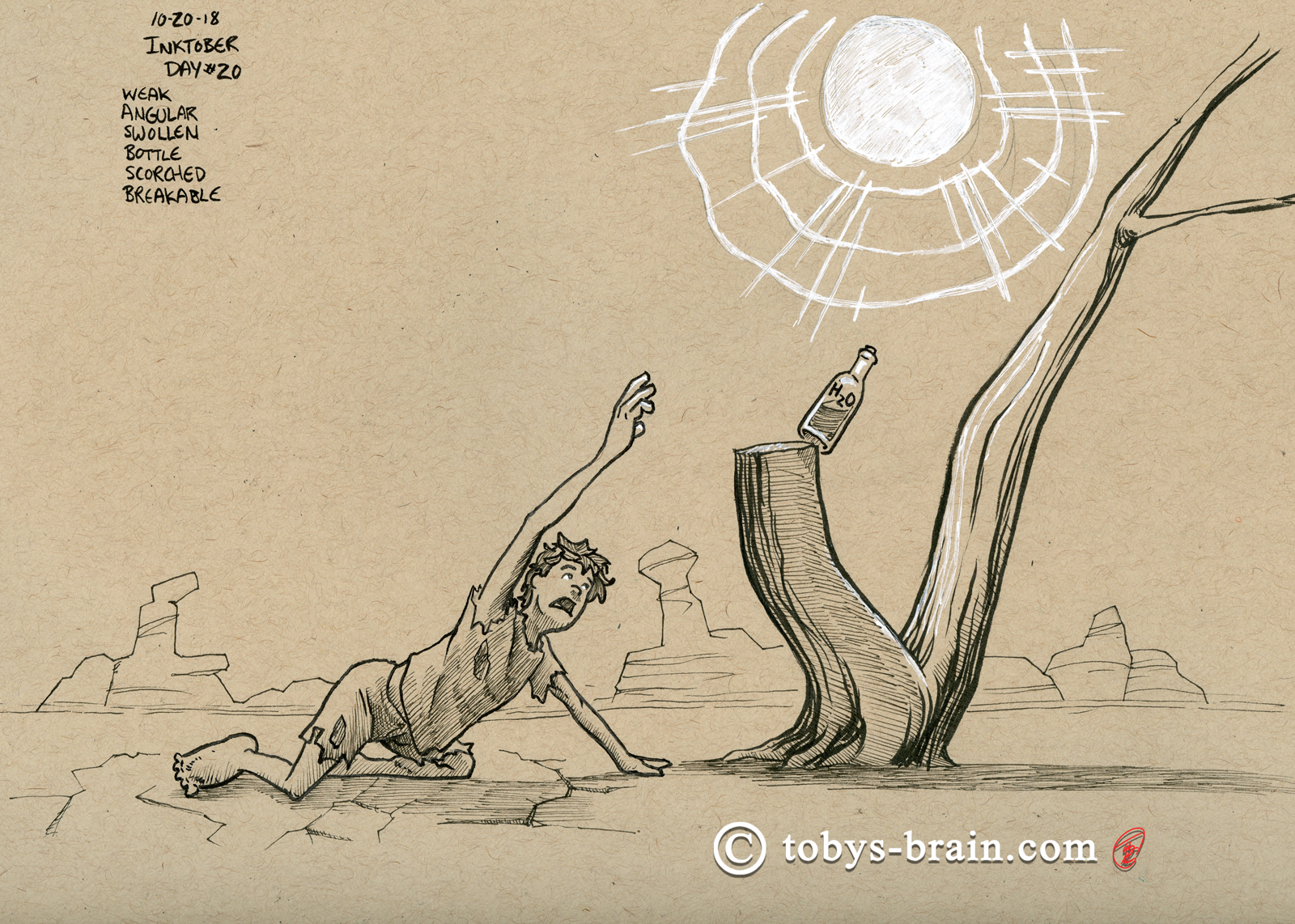 Prompt-based Inktober drawing: Weak, Angular, Swollen, Bottle, Scorched, Breakable. I wasn’t too happy with this one, I wasn’t in the mood when I drew it, but I got it done. That counts for something. 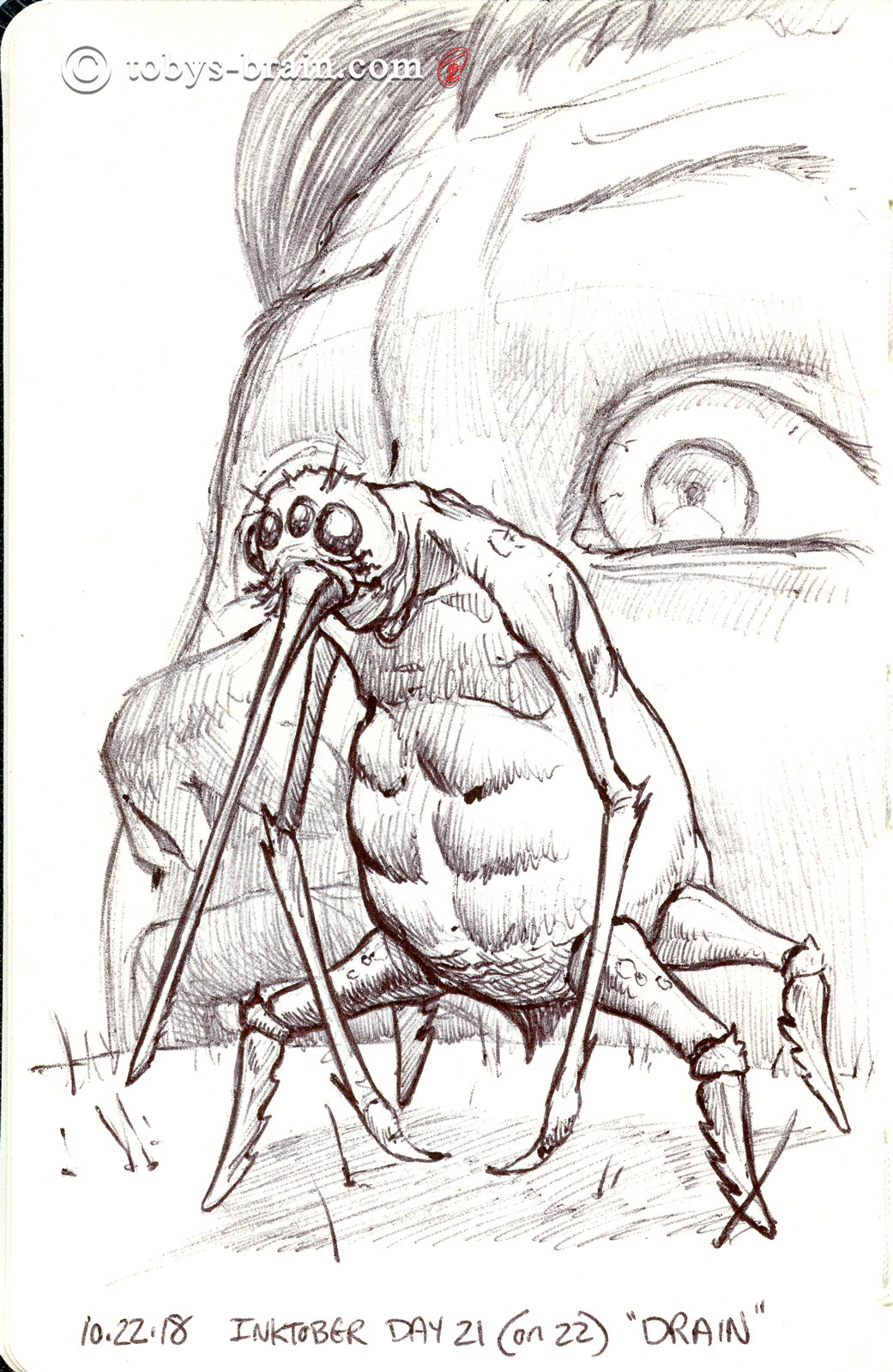 Prompt-based Inktober drawing: Drain. I did this one sitting in the dentist’s office, waiting for my kids. 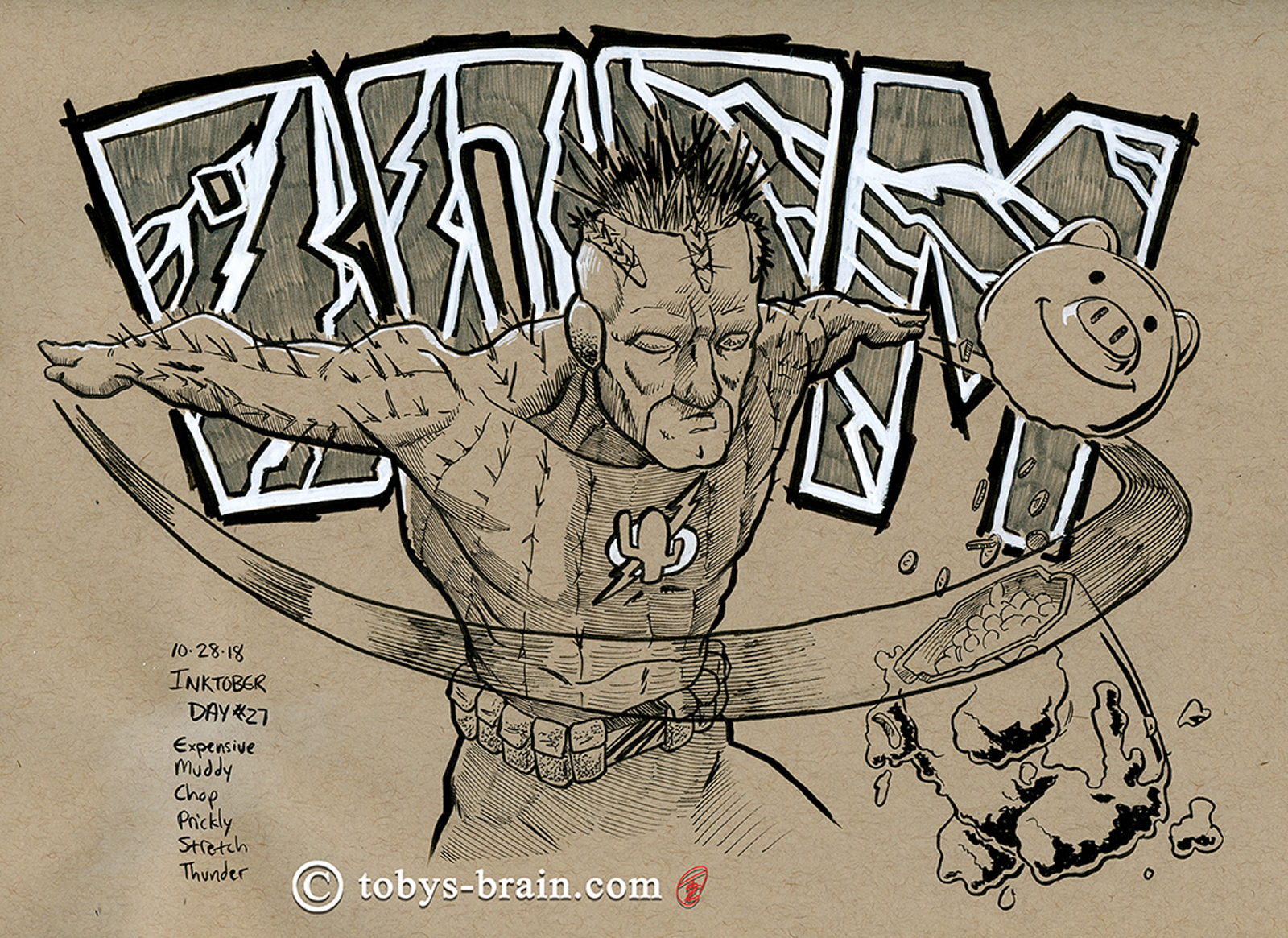 Prompt-based Inktober drawing: Expensive, Muddy, Chop, Prickly, Stretch, Thunder. Yet another super hero to emerge from my Inktobering: Thunder Cactus. I see him and The Clock both playing a role in something down the line… 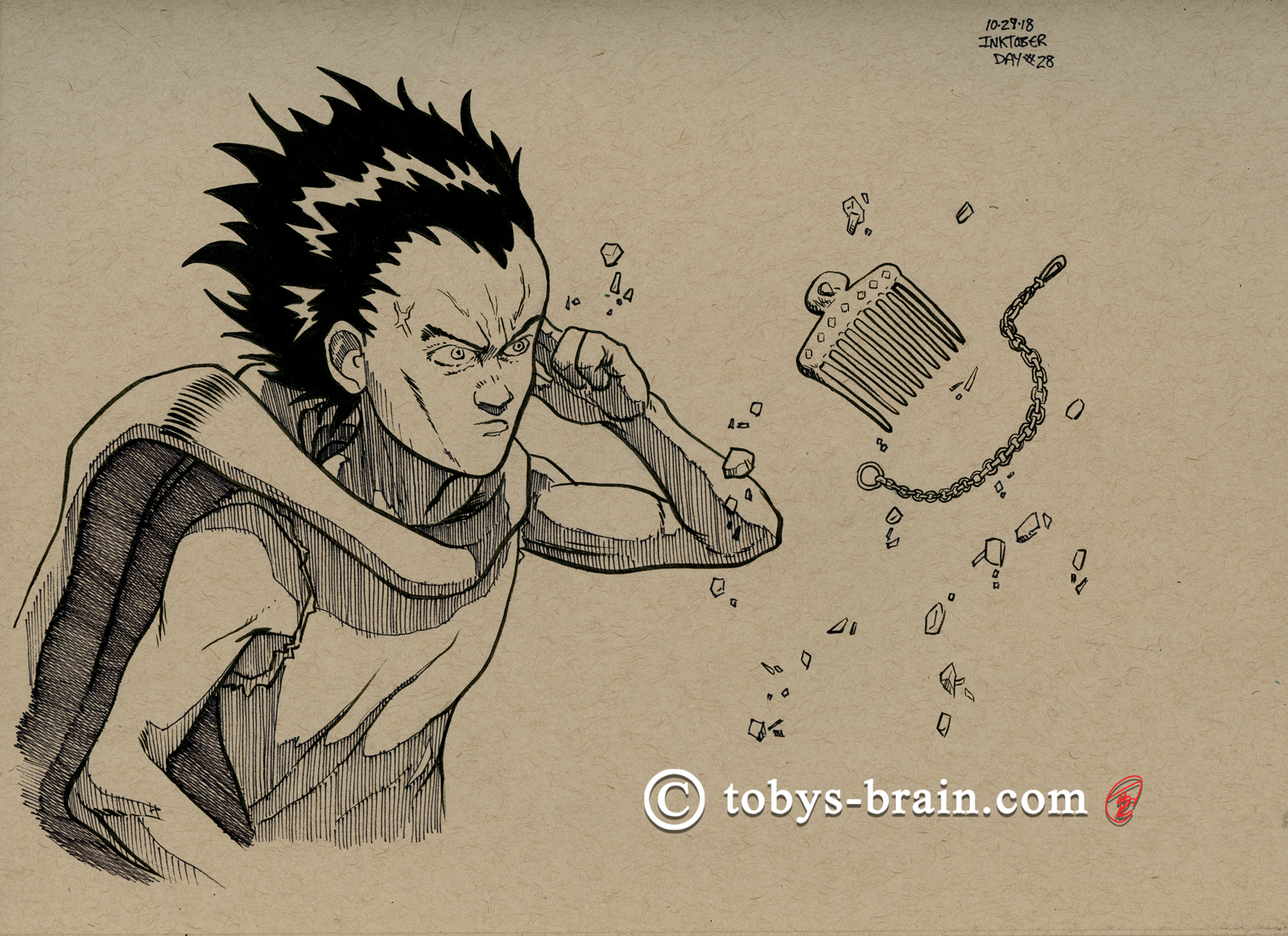 Prompt-based Inktober drawing: Gift. I really enjoyed this one, mashing together Tetsuo from Akira and the comb and watch chain from The Gift of the Magi for a “layered” approach to this prompt. It’s so deep, man. 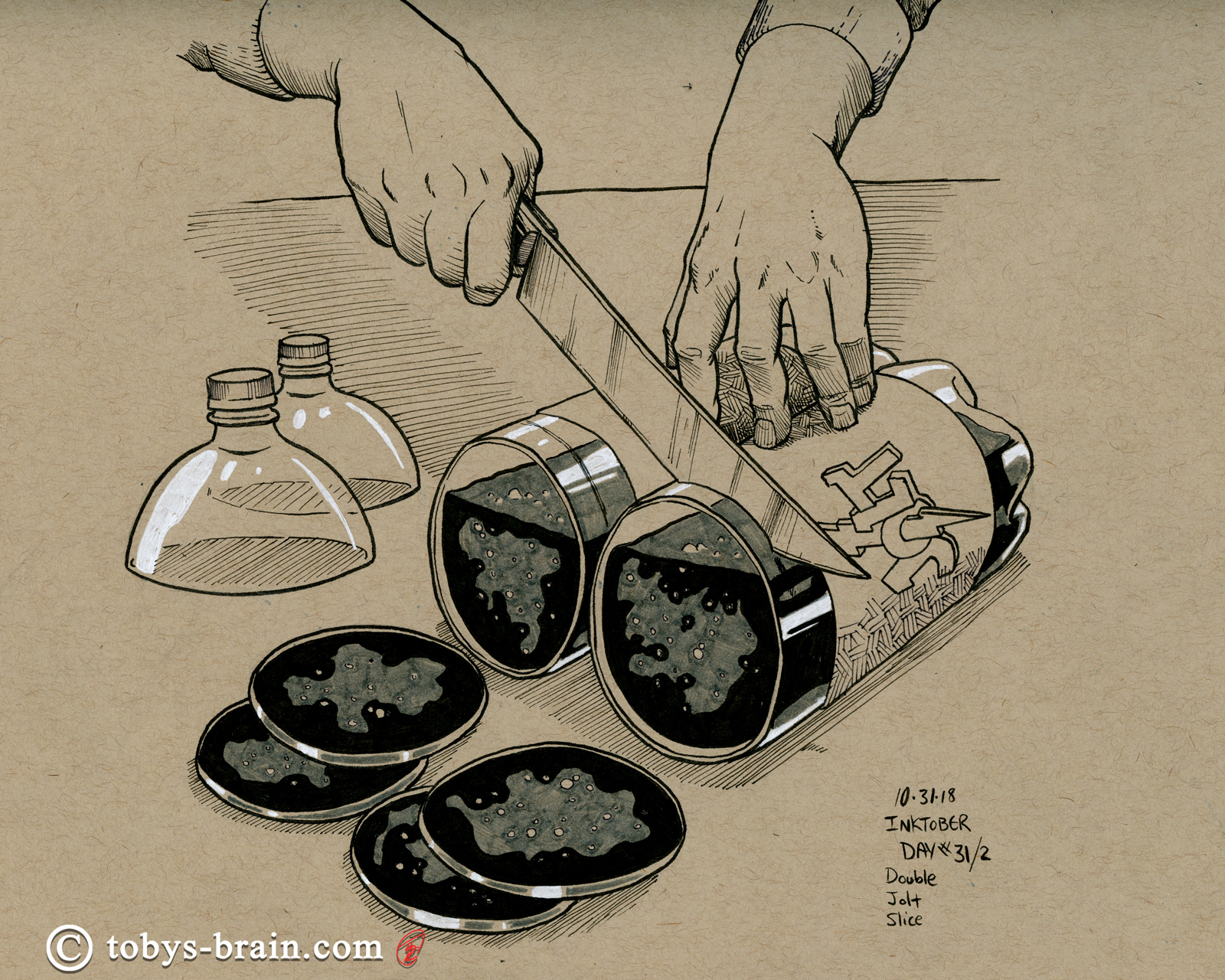 Prompt-based Inktober drawing: Double, Jolt, Slice. This was an extra drawing for the month, technically #32, but I wanted to hit all the official prompts. I haven’t had a Jolt Cola since college, when I over consumed to pull and all-nighter before a big critique and had serious chest pains and palpitations during said crit. I think I downed two 2 liter bottles, as well as almost a gallon of some caffeinated water product called Krank 2.0.

There you have it folks, Inktober 2018 is in the books. Time to tackle the next challenge.