Somehow, here we are in 2022. I intend to do a year in review style post about 2021, which should be…interesting. I didn’t post here as much as I intended, and I dropped the ball on a lot of goals I had set at the start of the year. But, I think I did accomplish a lot, some of which wasn’t on that goal list (at least initially).

Before that post, though, I have to do the annual sharing of the xmas card envelopes. For anyone new here (which, given my stats and how little time I have to spend trying to promote myself is likely zero), several years ago I picked up the habit of drawing on a handful of the xmas card envelopes we send out each year. The lucky recipients are close family and some very close friends. I always feel badly about those I don’t do custom illustrations for, but there’s just not enough time (or ideas). I’ve noticed I tend to get somewhat stressed and anxious as that time of year roles around. I feel like I have expectations to live up to, both in terms of people expecting art and me wanting to draw something that will entertain and look good. I worry I won’t have any ideas, even when I’ve been giving myself the helpful theme for the last 3 years of Totally Reasonable Uses for a Plunger. Once I get going, it becomes a ton of fun (though time consuming), and that aforementioned theme is leading up to an illustrated book in the future, which I’m excited to start working on. 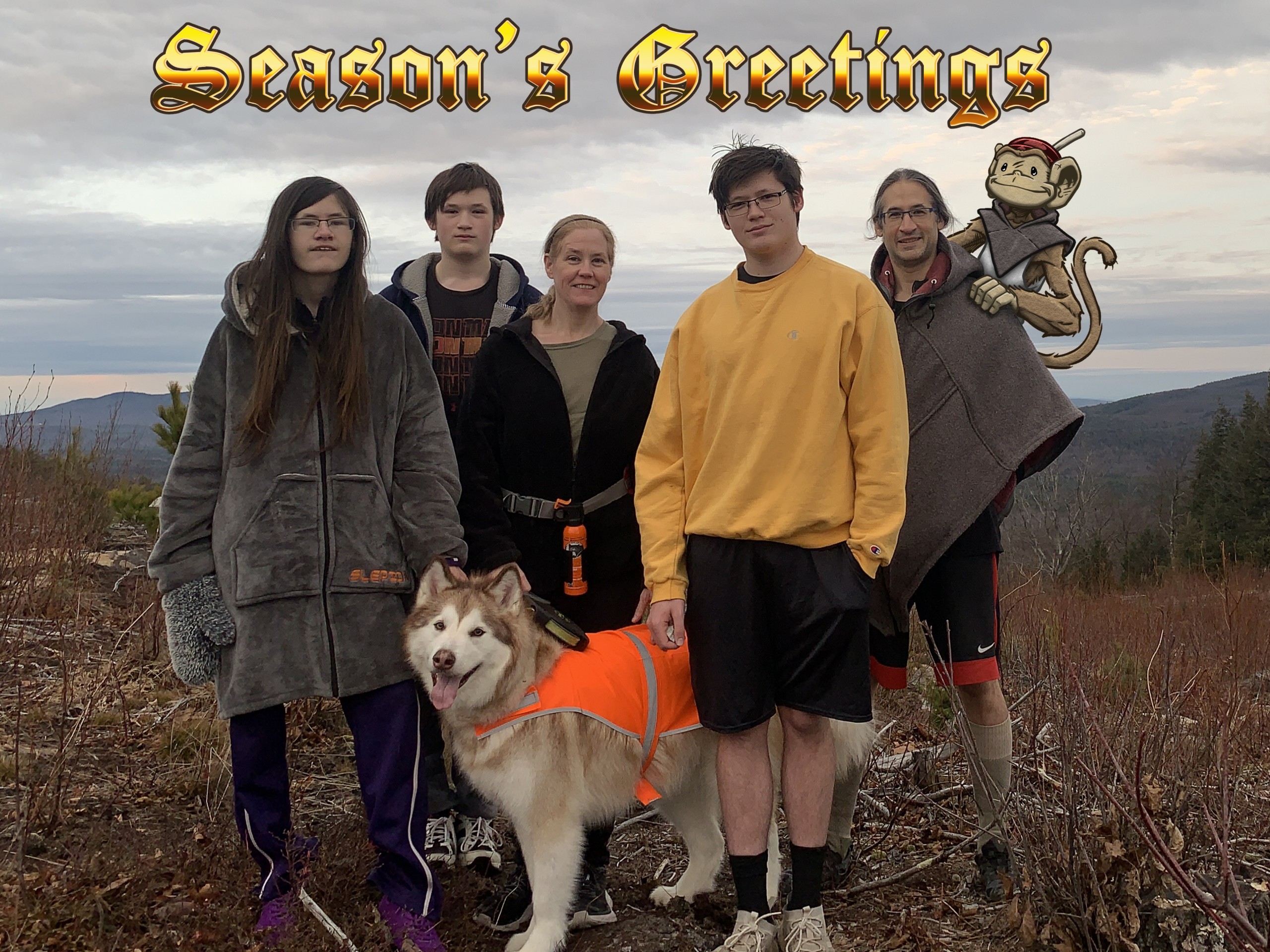 The 2021 family xmas card taken on a cold, overcast day in November atop “blueberry hill”, a spot we like hiking too near our home.

For the last several years, I’ve also been incorporating PMD into our family cards. He has become an increasingly bigger part of my life, so I guess it’s appropriate (and the family hasn’t complained…yet). It started out as a fun border element, but in 2019 I decided to try to draw him in to an actual family portrait. It’s more challenging than one might think, trying to get his colors to match the real world vibrancy (or lack thereof) and trying to get the texture and “grain” right so he looks like he was part of the photo. I planned a little ahead this year, and got the card done early. We ordered the prints, and waited. And waited. And waited. Finally we found out the order had been lost or delayed, and the earliest we could get them was less than a week before xmas. I managed to get all 40 some odd envelopes addressed, and all 11 illustrations done in two days. As of this post, 2 weeks after mailing them, I’ve only received confirmation of about 2 of them making it to their intended destinations. I’m assuming they arrived and I just haven’t caught up with everyone yet.

Anywho, on to the envelopes!

This envelope went to my best friend Jorj. He and I met in college and bonded over a shared sense of humor and love of cartoons and comics. We used to quote cartoons at each other (and still do, but in meme form now) or otherwise just make references to the animated awesomeness we grew up on. This here is a reference to Beavis and Butthead. I can’t count how many times we imitated and quoted them back and forth at each other.

Last year, I sent my great friend (from all the way back in high school!) the “shovel” Totally Reasonable Use for a Plunger, so I thought it was only appropriate to also point out that a plunger makes for a decent snow shovel, too. I draw a lot of influence from the great Bill Watterson in general, but especially when I draw snow and snowmen. I love how he was able to convey cold and texture with some very basic and somewhat limited linework, letting the empty spaces convey as much or more information than his actual lines.

This envelope went to my cousin Cheryl, who I spent a lot of time growing up with (and her sisters, too). We were all around the same age and lived just two streets away. We all went to school together (including several of us going tot he same college) and spent one day a week every summer at our grandparents house together. Wonderful and magical times. Anyway, at some point, I remember Cheryl having a pogo stick and us all mucking around with it at her house.

I drew this envelope for my parents. My dad was an avid golfer for a number of years, and still watches tournaments pretty religiously. This one was pretty fun to draw. With golf as popular as it is, there were plenty of reference images I found. I’m a bit of a workout/exercise geek, I spend a decent amount of time working out, being active, or pursuing physical skills. One thing I never took up, though, was golf. I don’t really know why, but regardless, I didn’t have a great sense of the proper way a golf swing should look, and I wanted to get it right.

The fly swatter envelope went to another old high school friend, Tracey. I have to remember she has a young son, so I should be careful about the ideas I might plant in his head…Last year I sent her the “cookie cutter” Totally Reasonable Use for a Plunger since she was posting a lot about baking and cooking, especially with her son. Hopefully that didn’t lead to any issues…

I sent “flashlight” to my dear friend Cat and her wife Kim. I’ve known Cat since college, and she’s an amazing artist herself. Cat and Kim have been huge fans and supporters of PMD since the beginning, and that means a lot to me, as does their friendship. There’s probably some symbolism that could be derived from the whole flashlight thing, but there wasn’t any when I drew it, I just thought it was funny.

As I’ve mentioned in previous years, my best friend (and super talented writer) Bill and I share a deep love of all things Star Wars. I usually try to use that as a jumping off point for his annual envelope (there has been a plunger saber and a Grogu sporting a plunger hat in recent years, as well as some other Star Wars themed PMD art prior to the Totally Reasonable Uses for a Plunger theme I’ve been sticking to). I wasn’t thinking Star Wars when I wrote down “ear muffs” on my growing list of plunger uses, but when I decided to use it this year, I thought of two things: people holding things to their ears mimicking Princess Leia’s hair style from A New Hope and Lobot (Lando’s administrative aide on Cloud City in Empire Strikes Back). I wasn’t sure I could reference Lobot, though, since he doesn’t speak, so I went the “hair buns” route. I suppose I probably could have given PMD a Cloud City background and Bill would have gotten it and been able to explain it to his wife and young daughter (also a burgeoning Star Wars fan), but I thought this was funny.

Hannah is the niece of my friends Cat and Kim and has also become a PMD fan. She recently finished art school herself and I’m sure will be doing great things in her future. Hopefully PMD will continue to amuse.

So, my family has a history of being known for “toilet humor”. I know my sister in particular gets a big kick out of Plunger Monkey because, well, plungers. When I shared last year that I was thinking of doing an illustrated book of Totally Reasonable Uses for a Plunger, she (along with my nephews) came up with a bunch of suggestions that she would randomly text me. Back scratcher was one of them, I’m not sure if it was hers or one of the boys, though. Hopefully it caused a chuckle.

I sent “arrow” to my college/art school friend Rebecca. She has become quite the athlete in the intervening years, getting heavily involved in Crossfit. I know archery isn’t really in the Crossfit repertoire, but, it IS a sport, so I thought it was a match. Rebecca and I both went through the illustration and painting programs (I believe she double majored, too, like I did) and were both in the honors program (though I dropped out of it my senior year. I was depressed and didn’t see the point of the extra work), so we were around each other a LOT. I’m sure we could tell lots of interesting stories about certain projects and professors over the years.

Like my sister, my brother also appreciates the family toilet humor. He also has two young (and very energetic) boys…who sometimes like to sword fight…I’m sorry James (but if this happens, I want to see video). I still laugh thinking back to a time when I was old enough to be left “in charge” when it was just he and I at home. I wanted to scare him in a silly way, so, while he was in the living room, I walked down the hall to the bathroom. When I got in there, I quietly removed the plunger from the closet, and then yelled “HEY! WHAT ARE YOU DOING IN HERE! OW! HELP!” and otherwise banged around, trying to convince him there was an intruder. I then flung the plunger into the hallway. It’s amazing I didn’t damage the wall. He obviously didn’t fall for it, I’m not even sure he turned to see what was going on, missing out on my amazing humor.

Another year and another series of PMD xmas card envelopes in the books. Like I said, these last few years worth are leading up to a book project. All the envelope art is basically serving as the rough drafts. I have to determine the book format and a few other things before I can really get working on it, though. I kind of like the “landscape” format, but that might be challenging from a print-on-demand approach. Maybe by the time I’m actually ready it will be an offered option…I do tend to take a while to get around to some of the bajillion projects I have in mind.

I’ll save other updates and whatnot for that promised 2021 year in review post (which I’ll aim to put out sometime next week), but I’ll at least mention I finished the year doing a lot of sewing (you can check out my new Everyday Utility Belt project over on my facebook page). I’m planning to spend a little more time on another sewing project to kick off the year, but I’ll be switching back to drawing at night again (plugging away at Inside Toby’s Brain), and then tackling some other drawing projects when the sewing is done. I just have to decide which project…