Another year, another…something? As cliched as it is to say, I’m baffled that another year has slipped by. On the one hand, it’s great we all made it through to be reading (or writing in my case) this here blog post. On the other hand…where did the time go? I don’t often think about how old I am, and the fact that I keep getting older (though I do think about other people getting older, strangely), but more and more these days I am aware of my age and just how many things I still haven’t managed to accomplish. It’s very easy to go down a dark path, dwelling on such things, so I do my best just to focus on making progress on the dreams.

And since we’re being all introspective and self-reflective and whatnot, let’s do a little “year in review” post again (which I apparently never did to kick off 2022, despite intending to). Let’s start at the end and then jump to the beginning, because I said so. I finished off 2022 the same way I do every year of late: a custom xmas card and some custom xmas card envelope art. 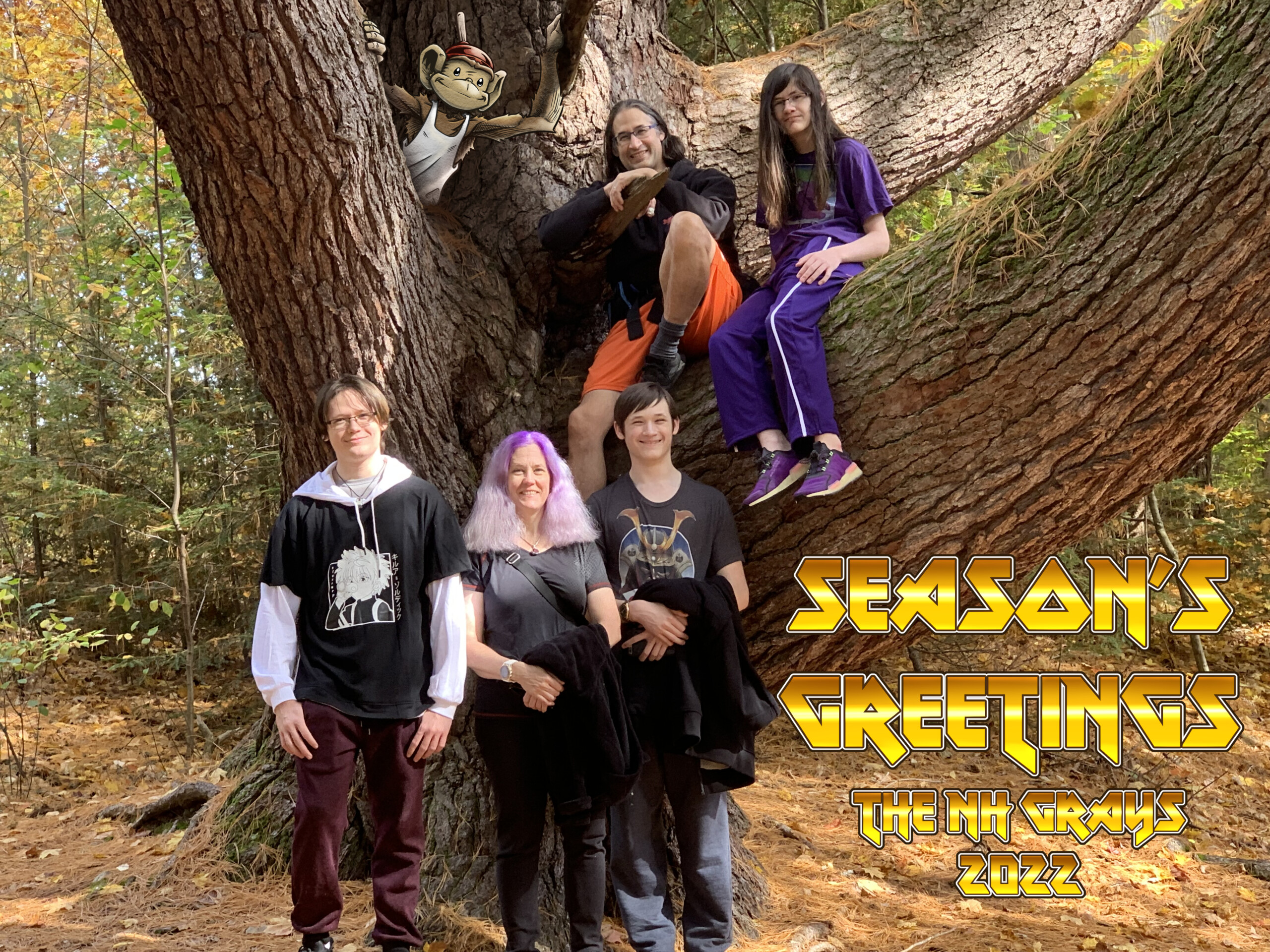 It seems like this was one of the few times we all got outdoors at the same time to do a little adventuring. This tree was absolutely massive and very climbable (and maybe even livable…). 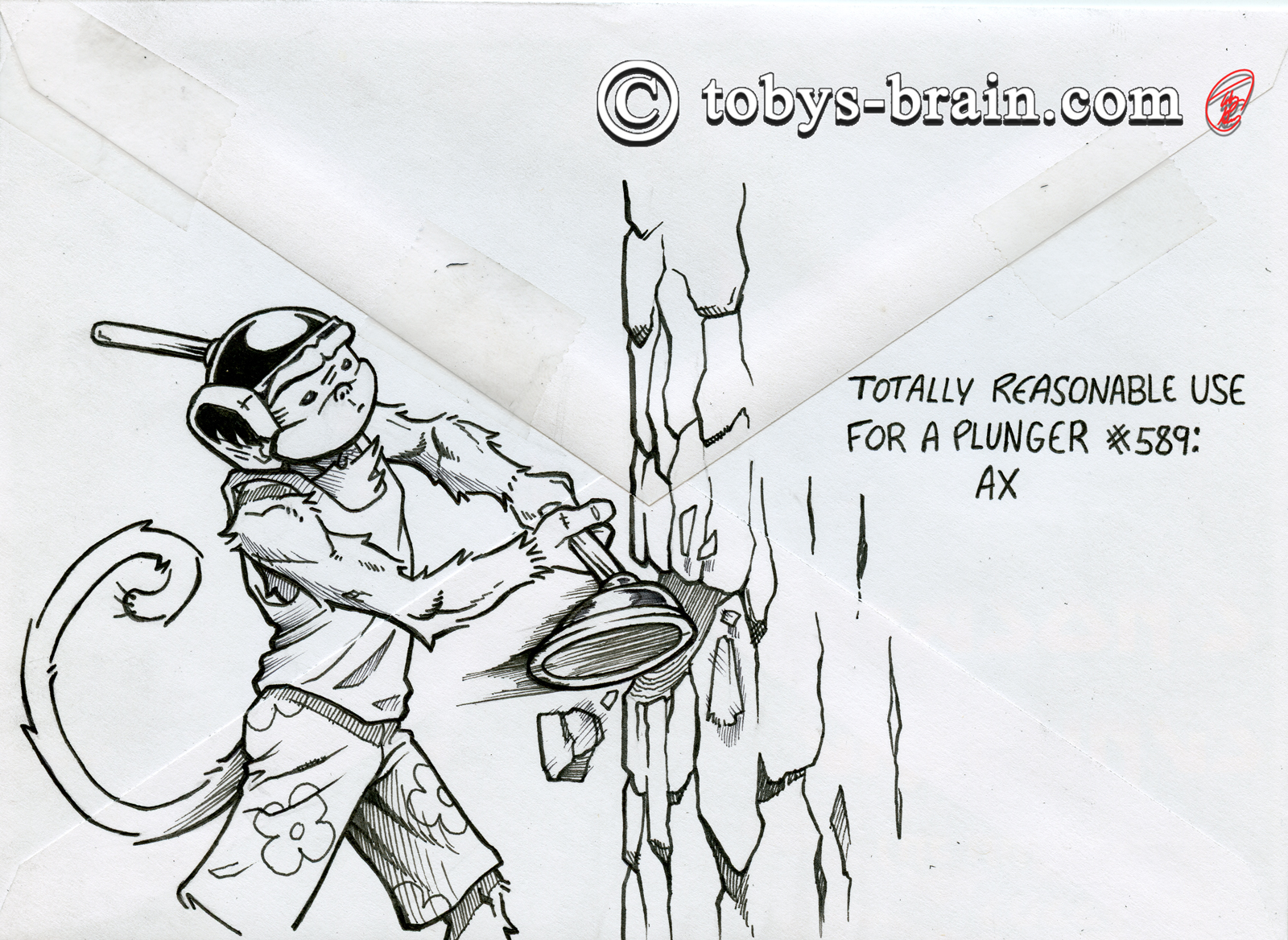 This would totally work…if you remembered to sharpen your plunger. 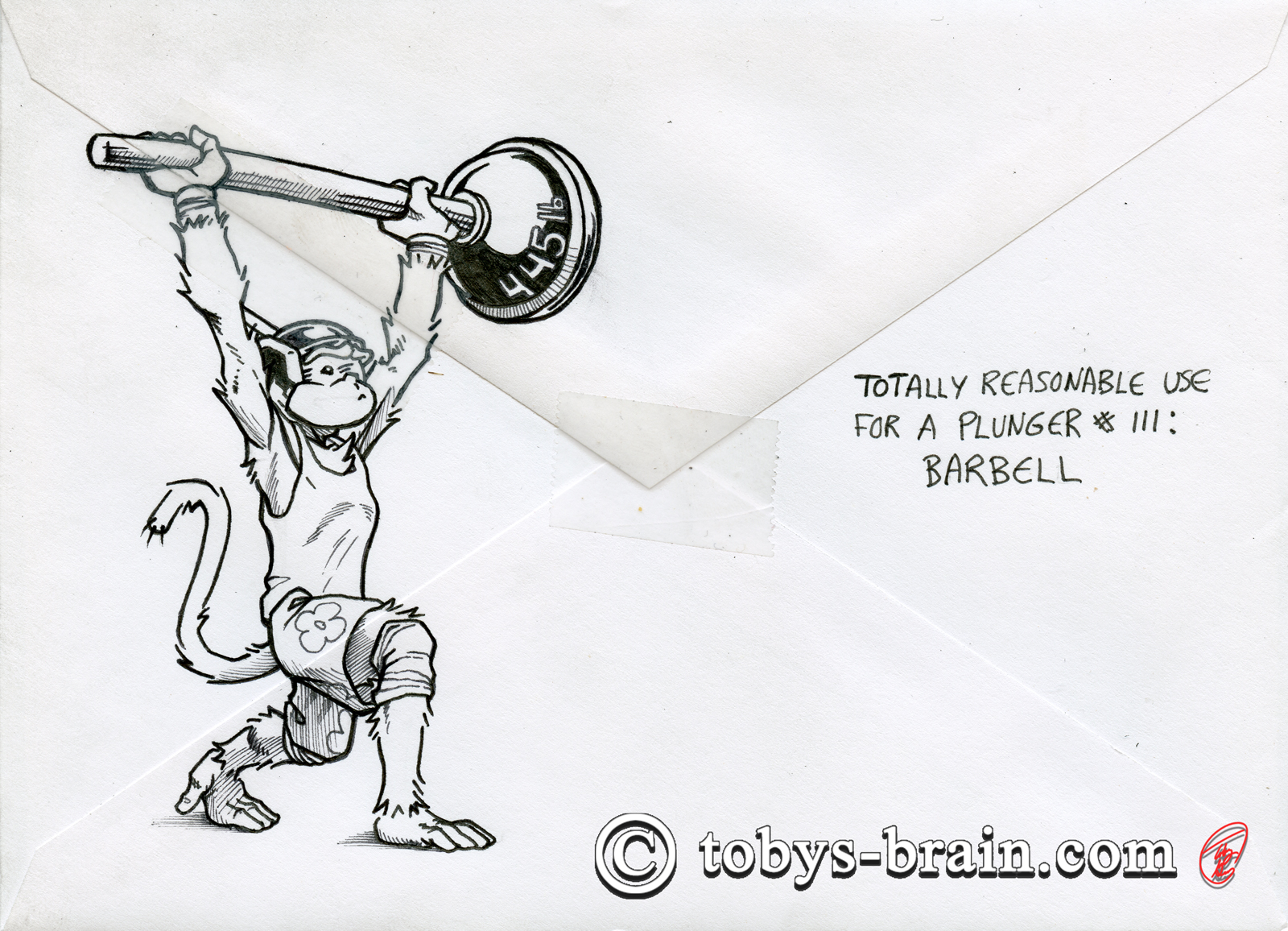 A plunger that size is bound to be and the heavy side. Plus, training with unbalanced loads is a great way to introduce a new challenge! 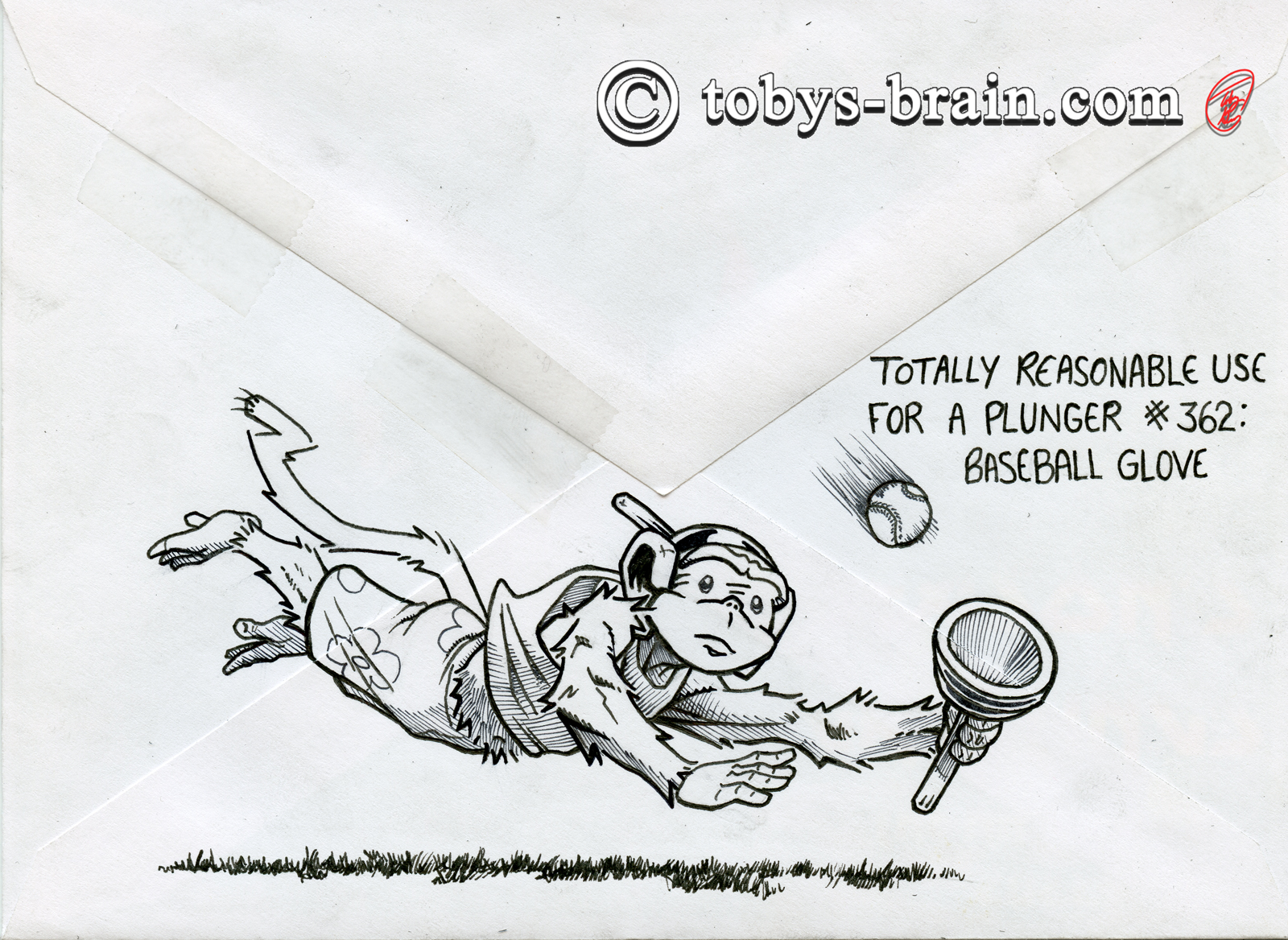 The handle creates a reach advantage, and just think of the suction! 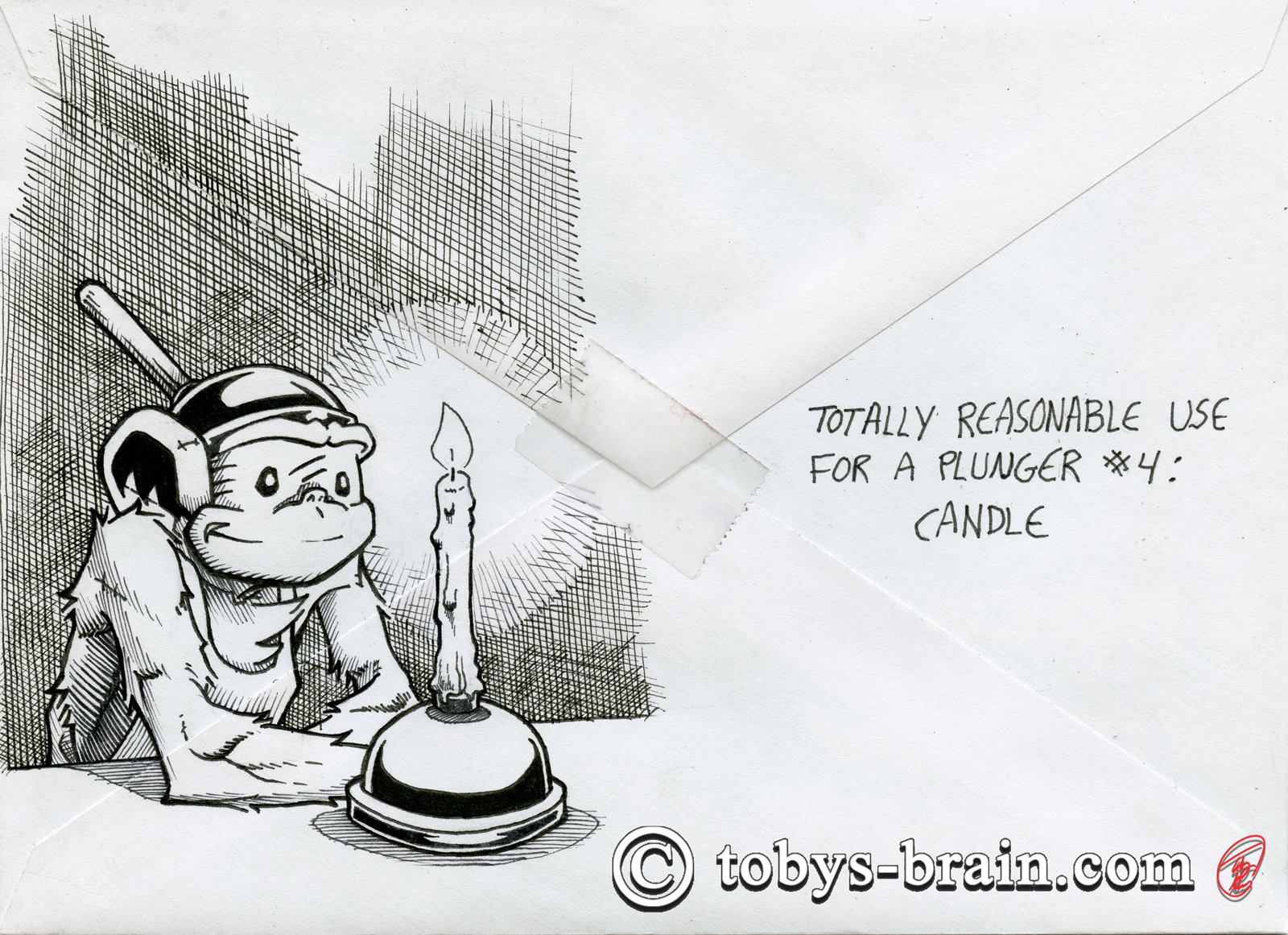 One of the safest candles around. Once you slam it down on a surface, it won’t tip over! 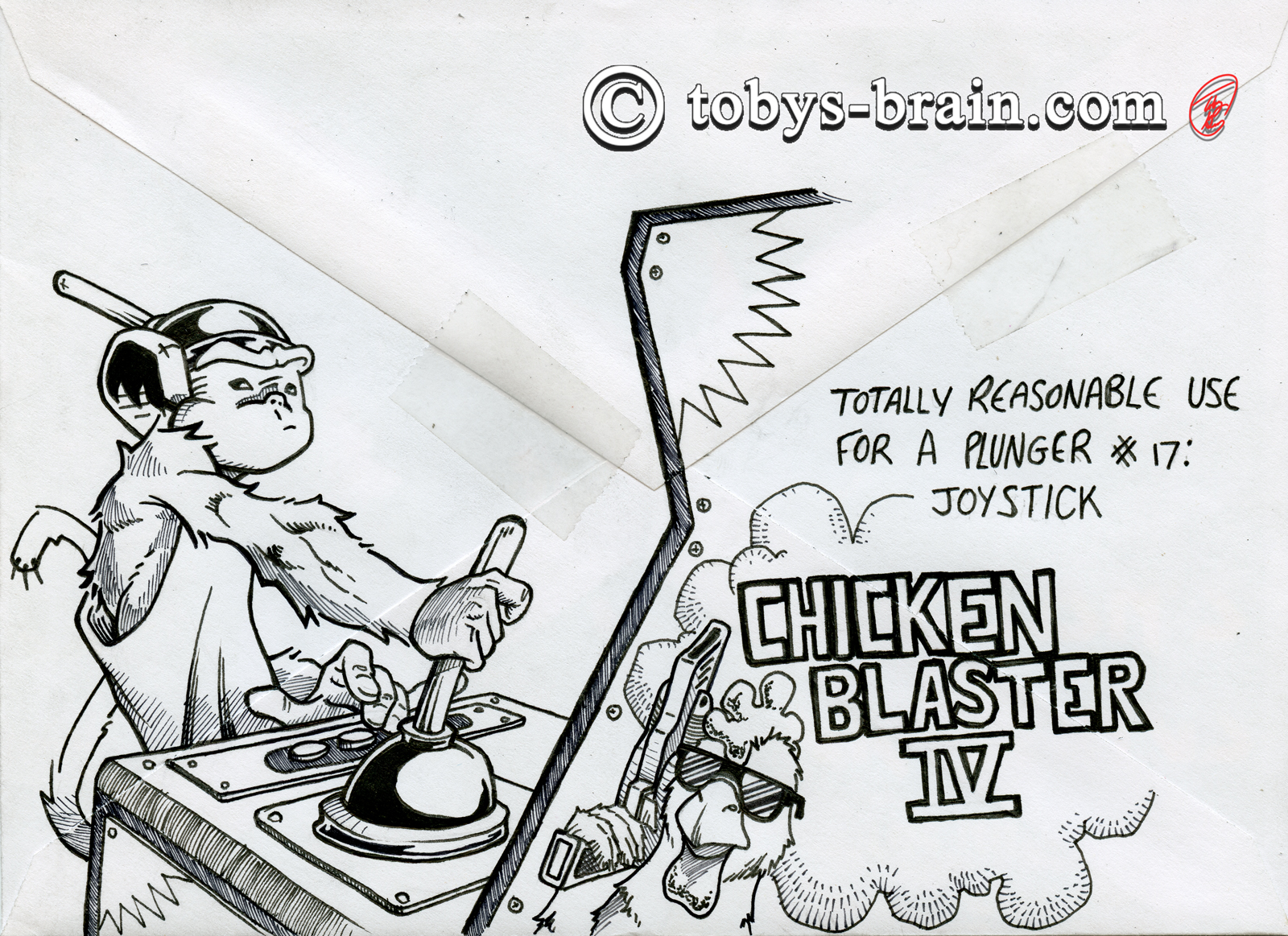 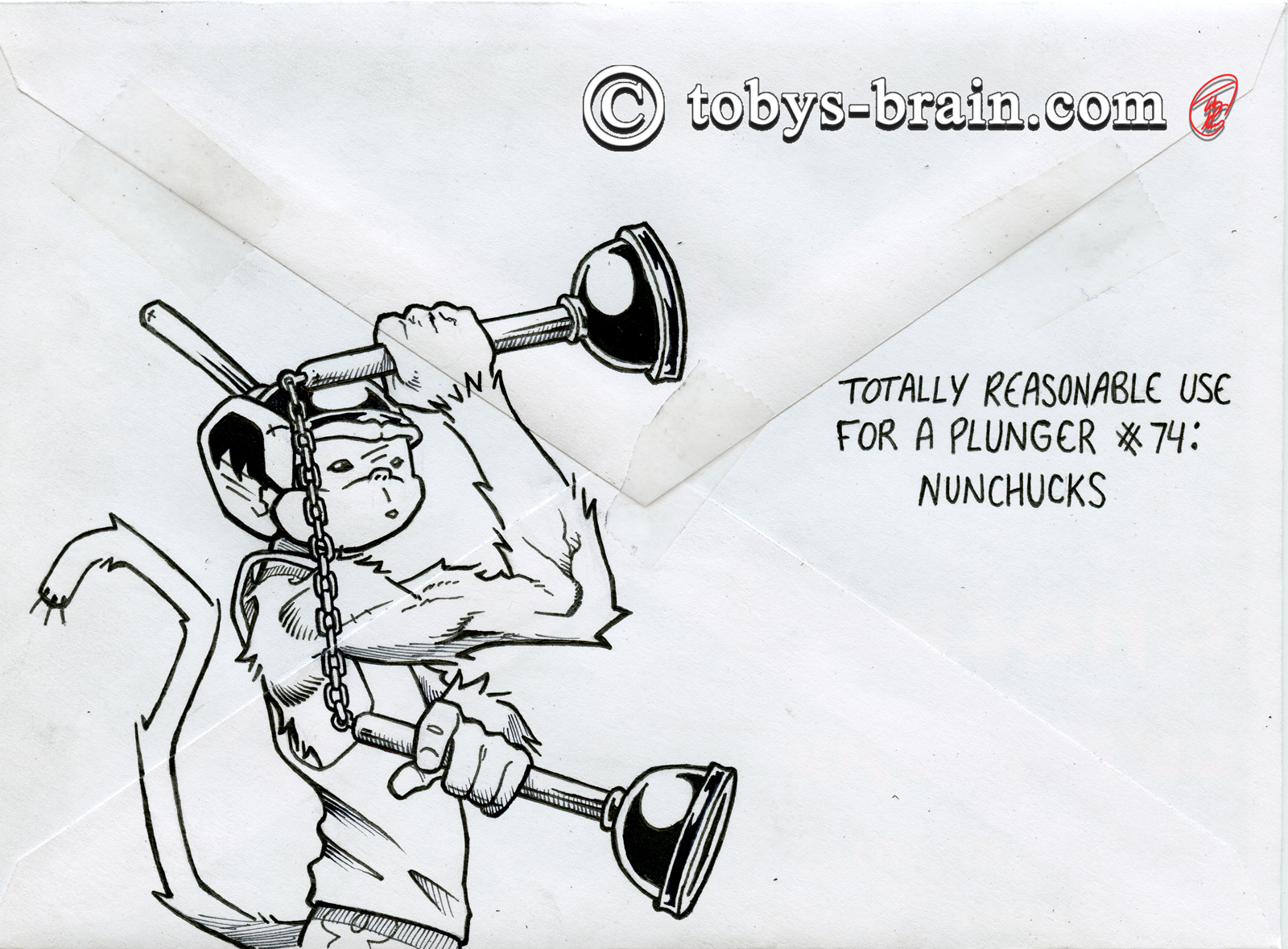 Strike fear into the hearts of your enemies: are those plungers new…or used? 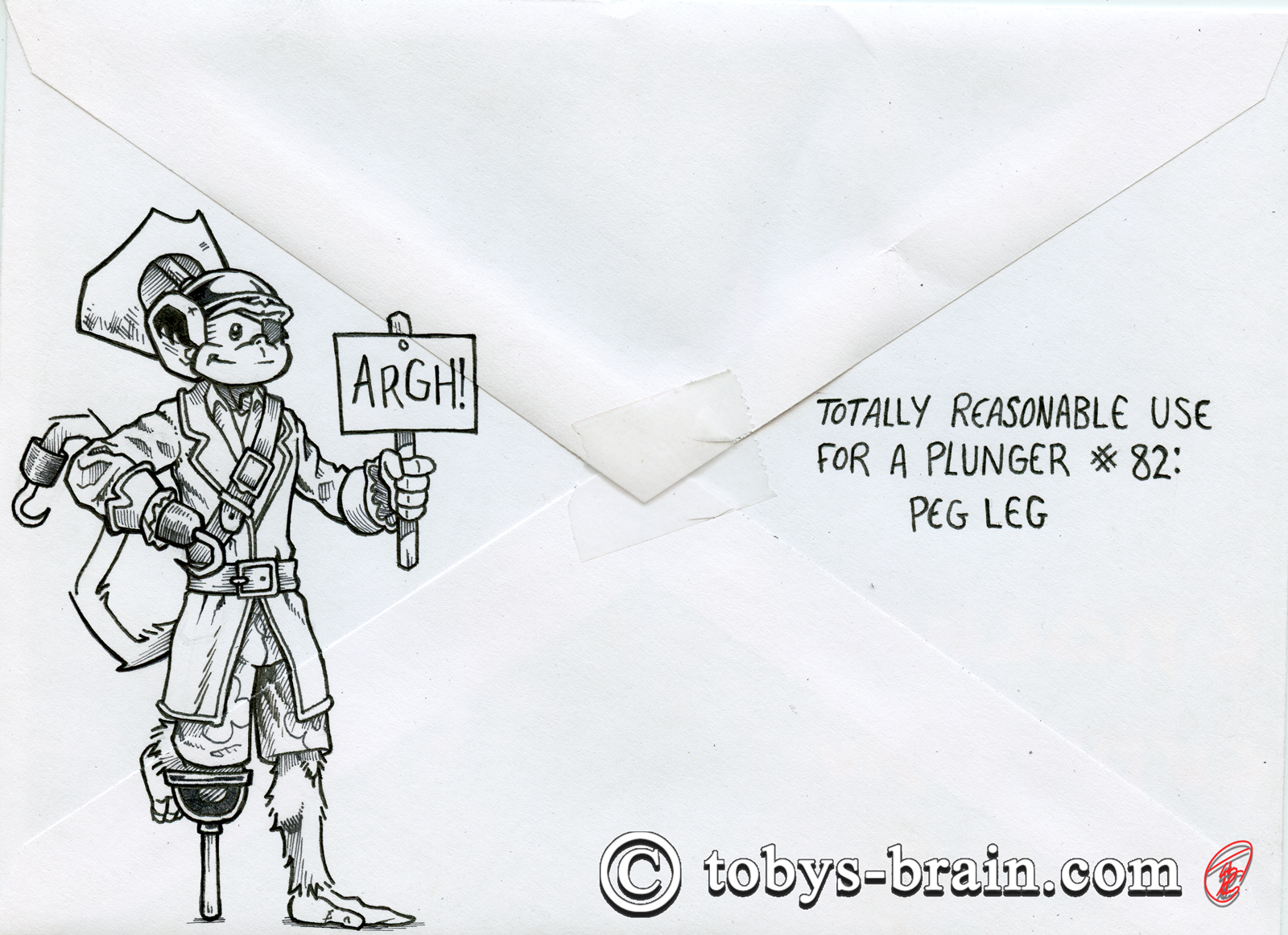 Comfortable to wear and won’t fall off, whether used as a necessary prosthetic or as the perfect accessory for your costume! 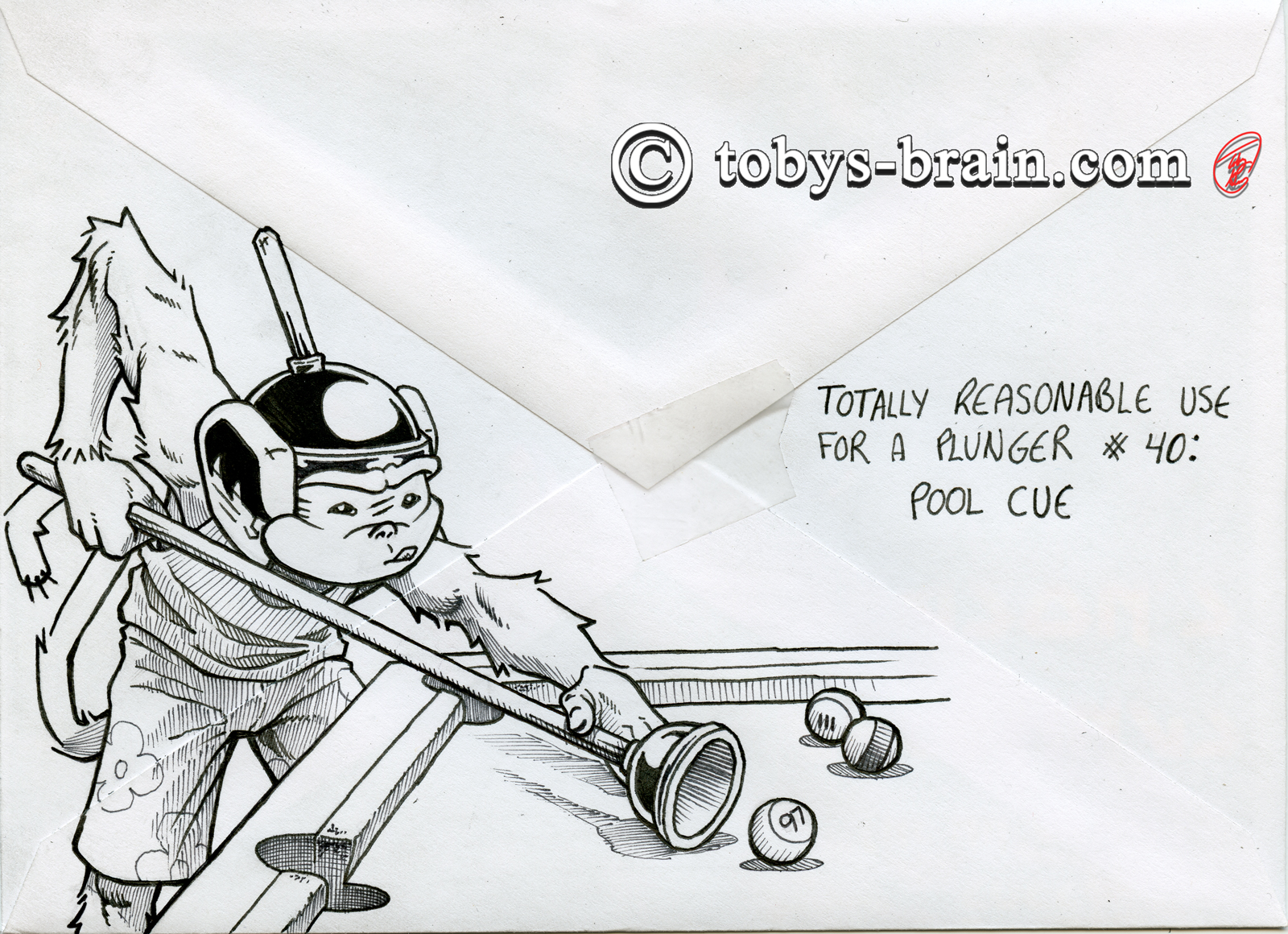 With a much bigger striking surface compared to a “normal” pool cue, this long handled plunger guarantees you’ll hit your target! 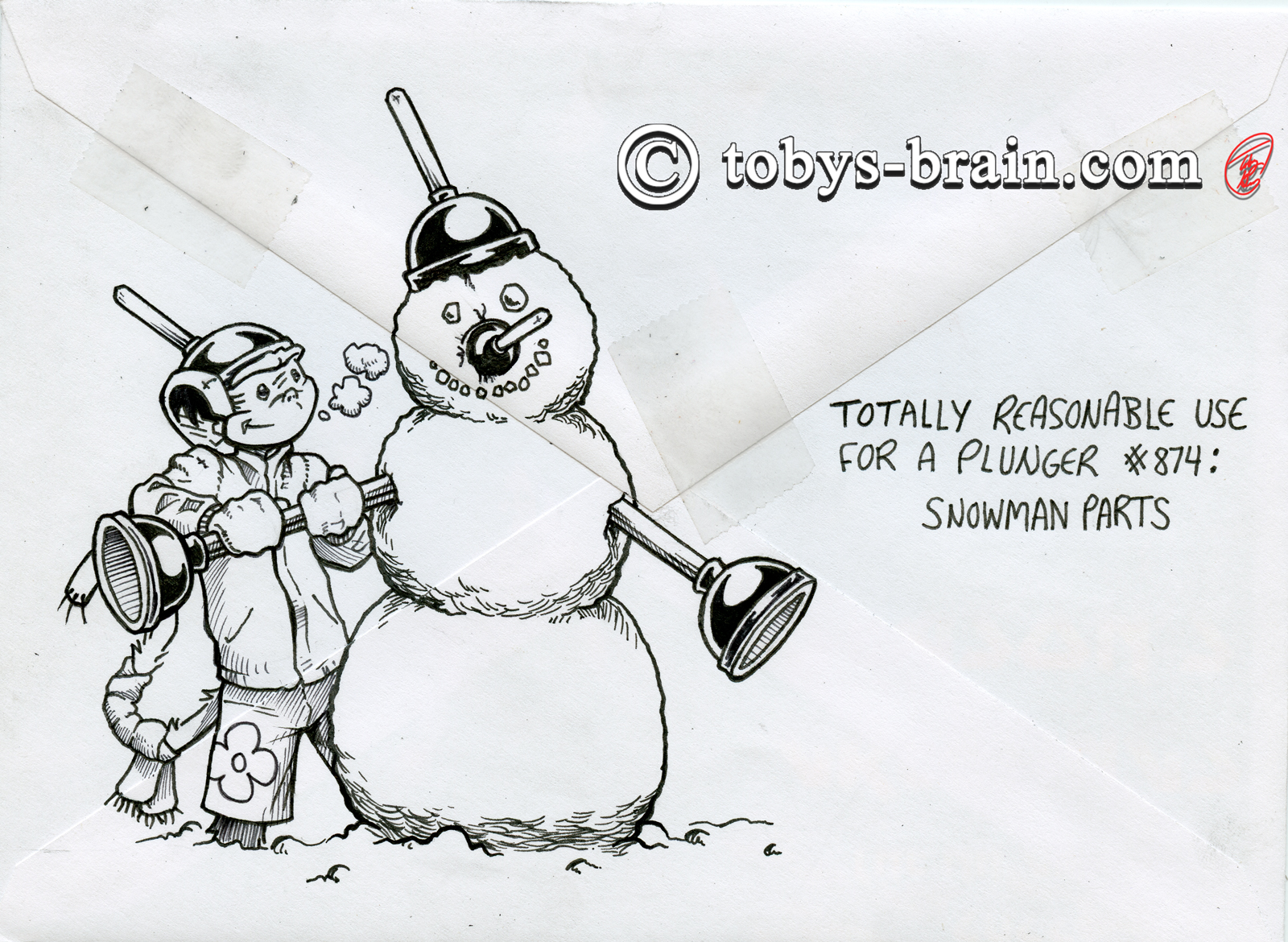 Just because he’s made of snow doesn’t mean he can’t help out around the house occasionally! 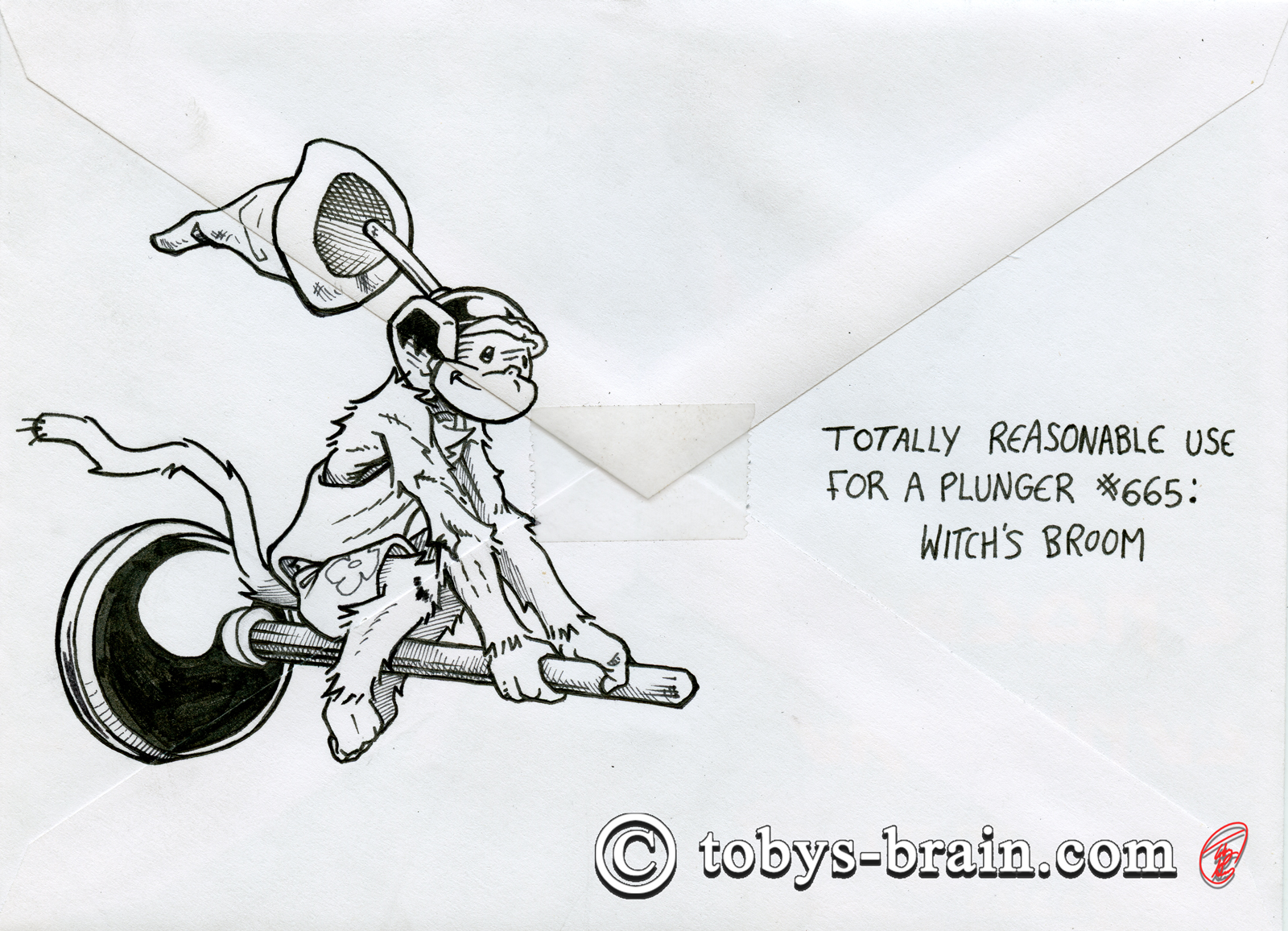 Unparalleled mid-air stability, all while being practical, comfortable, and stylish!

When I look back over the years of envelope art, I’ve noticed a trend: I’m putting more and more thought and care into them. I have no idea what condition they even arrive in, if anyone hangs onto them once they’re opened, or if they are destroyed by that point. However, I enjoy doing it, and it has inspired what I think will be a really fun book: Totally Reasonable Uses for a Plunger. I started a list of ideas a few years ago and I’m keeping track of all the random numbers I assign them. This year I thought of some other elements that will go into the eventual book, so I began a bit of a time saving workflow for when I eventually put the book together. All of these illustrations will serve essentially as rough drafts for the final images. It’s funny, I get a little stressed each year about coming up with clever ideas and how best to illustrate them, but it always seems to work out and I have a lot of fun. One of these days I’ll learn to trust my Brain.

Okay, now that we’ve started with the end, let’s move on to the beginning of 2022. I can’t even remember how the year started, so I’m going to have to go look through my files…

Wow. Okay. Not one single panel of It’s Plunger Monkey Dynamo Time! since July-ish of 2021. That’s not good. No new shirt designs (though that was kind of intentional, since they aren’t selling and I haven’t been able to market/advertise/promote them). Looking back at my 2022 goals list, there’s quite a few targets I completely missed. My annual ambitions tend to be lofty, with missed goals from previous years spilling over and mixing with all the new ideas that keep popping up. That doesn’t mean the year was a bust, though. Depending on how I choose to look at it, it was actually fairly productive (the end results just didn’t lead to marketable products yet).

I finally buckled down and finished Inside Toby’s Brain, my short comic that gives readers a window into how my Brain and Plunger Monkey get along. I can’t remember when exactly the idea came to me and I first started working on it, but it’s probably at least before 2017. I think I drew the first 3 pages in the app MediBang on my old Samsung tablet (I still have those original files, because I keep everything, and man has my art improved over the years. I’m still not happy with my skills, but a little perspective every now and then is good for the mental health), which I think I got in 2016 (?) and I didn’t get an iPad until 2017. It was always meant to be a fun side project that I could work on when I wasn’t sure what else to focus on while I developed my skills, figured out a comic book workflow, and tried to define my “style”. It evolved into something a little bit more, and I do have a plan for it to see print…but it’s tied to another project that I’m still a ways away from tackling. Here’s a few of the “finished” (pending a final edit at a later date) pages, not necessarily sequentially: 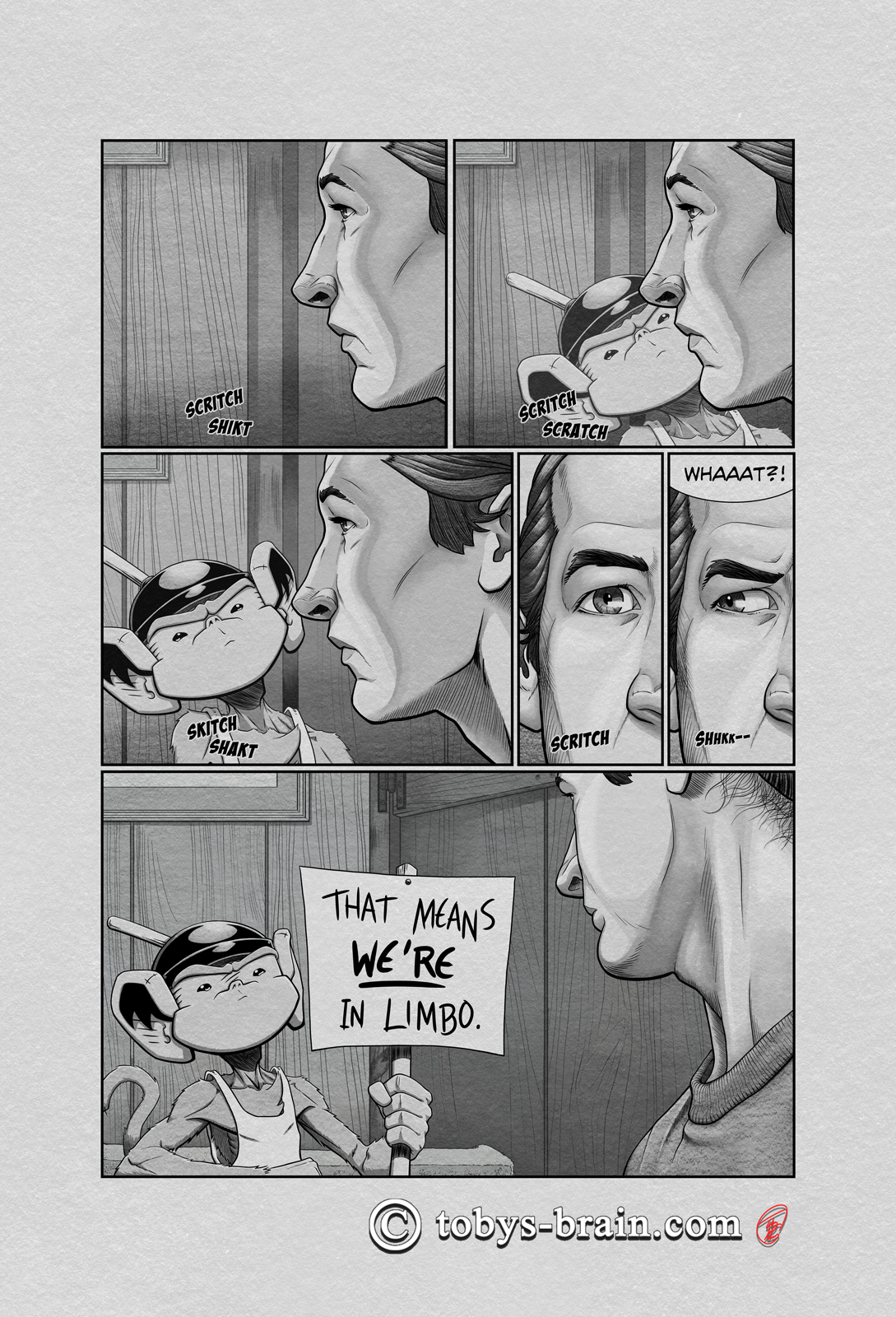 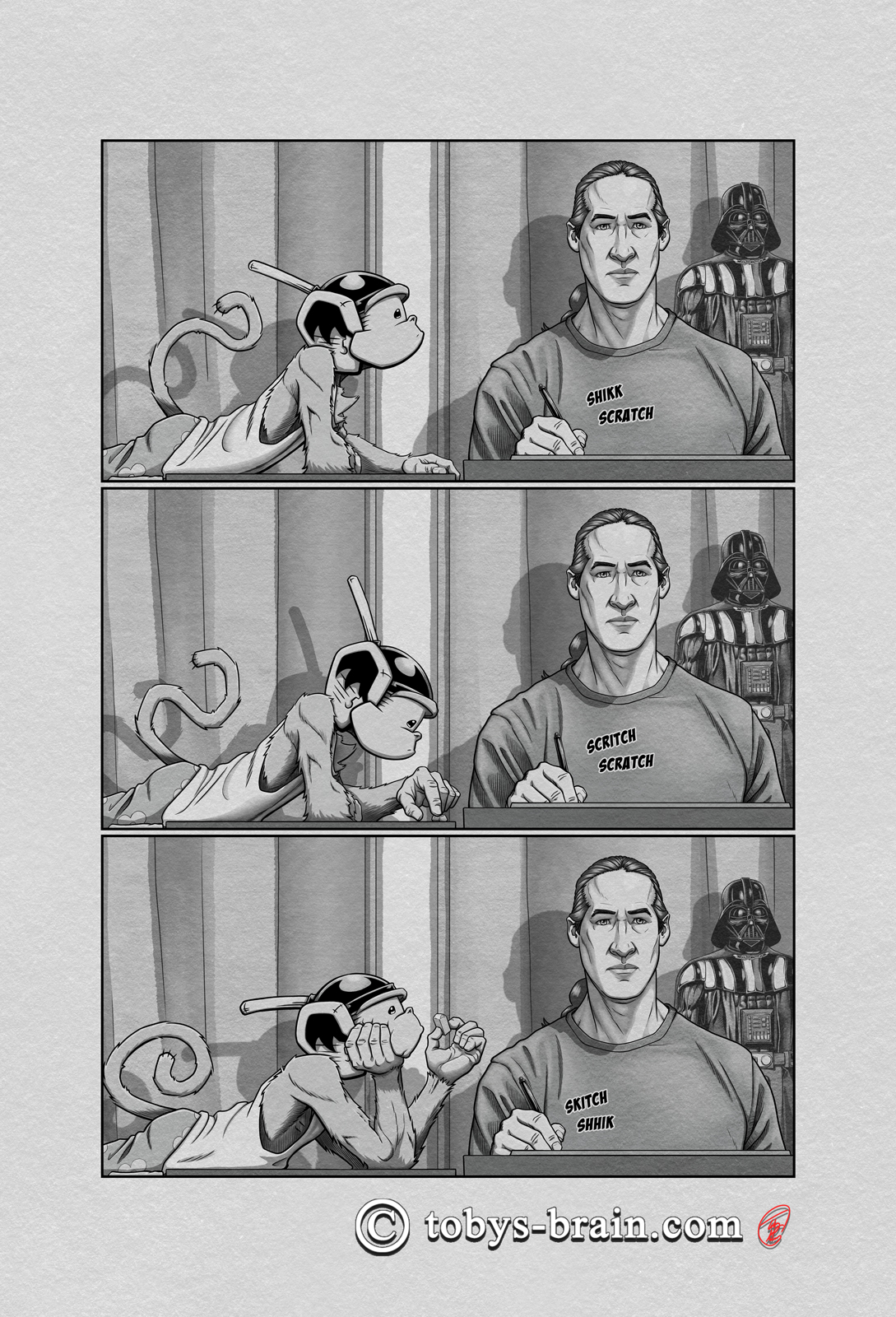 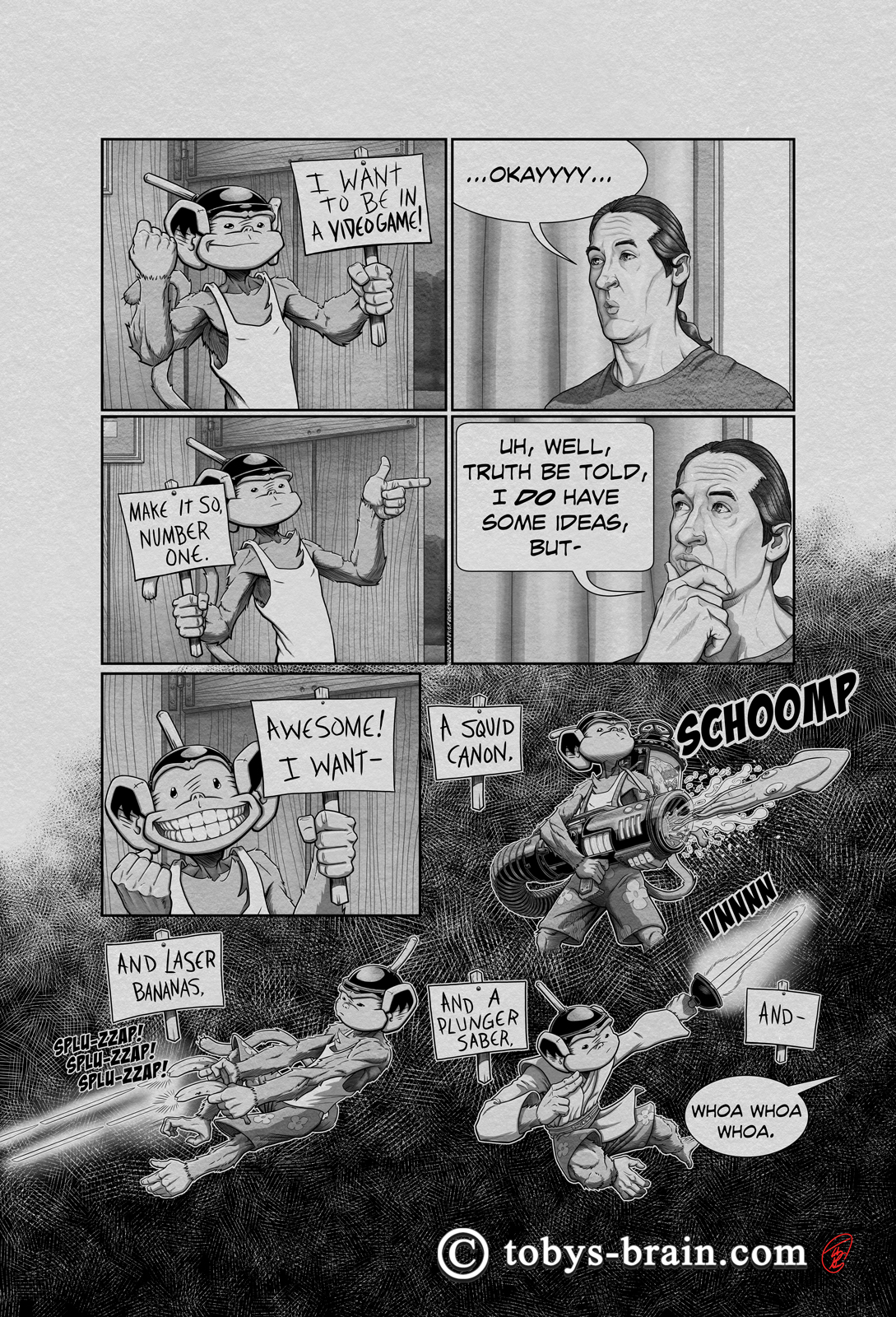 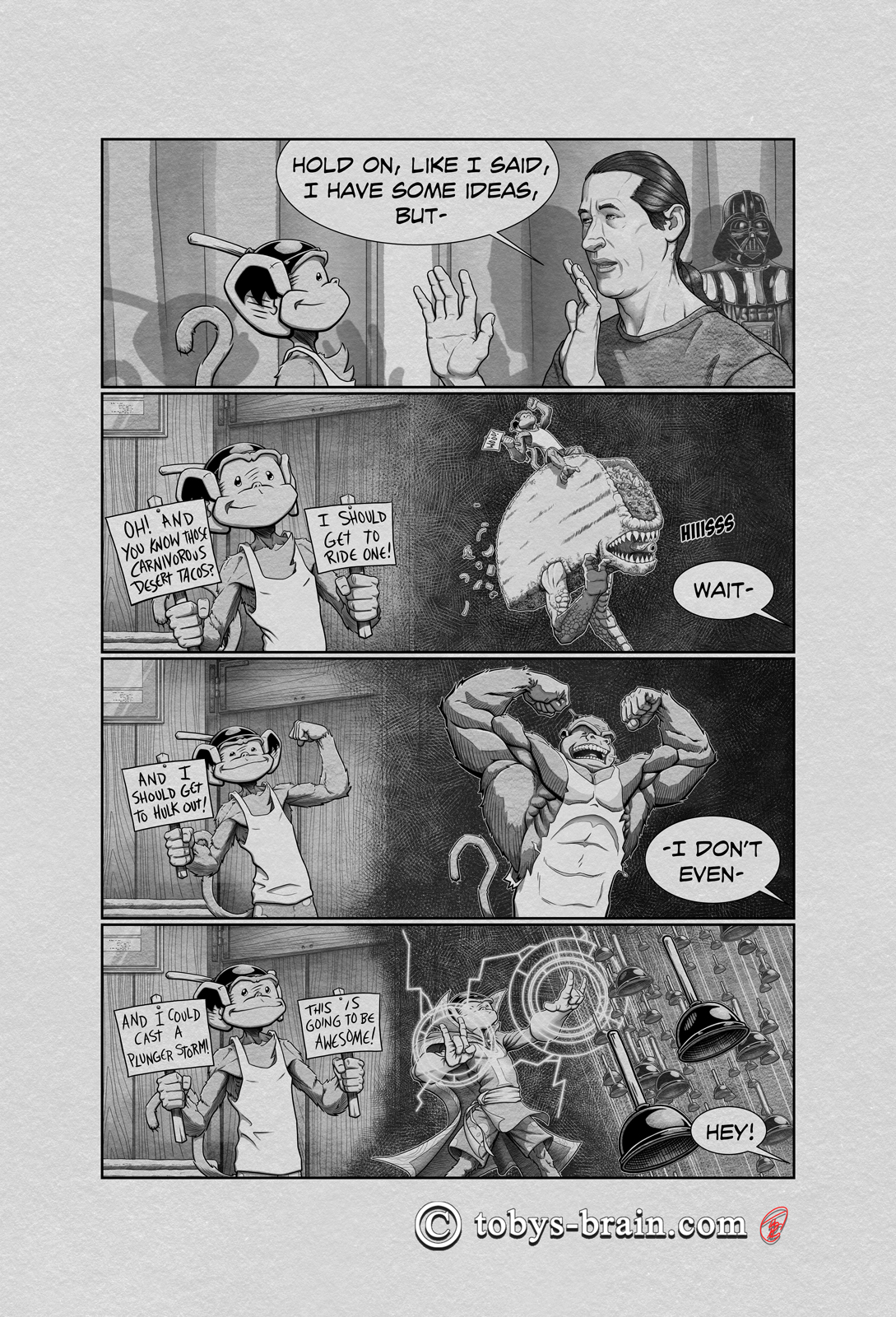 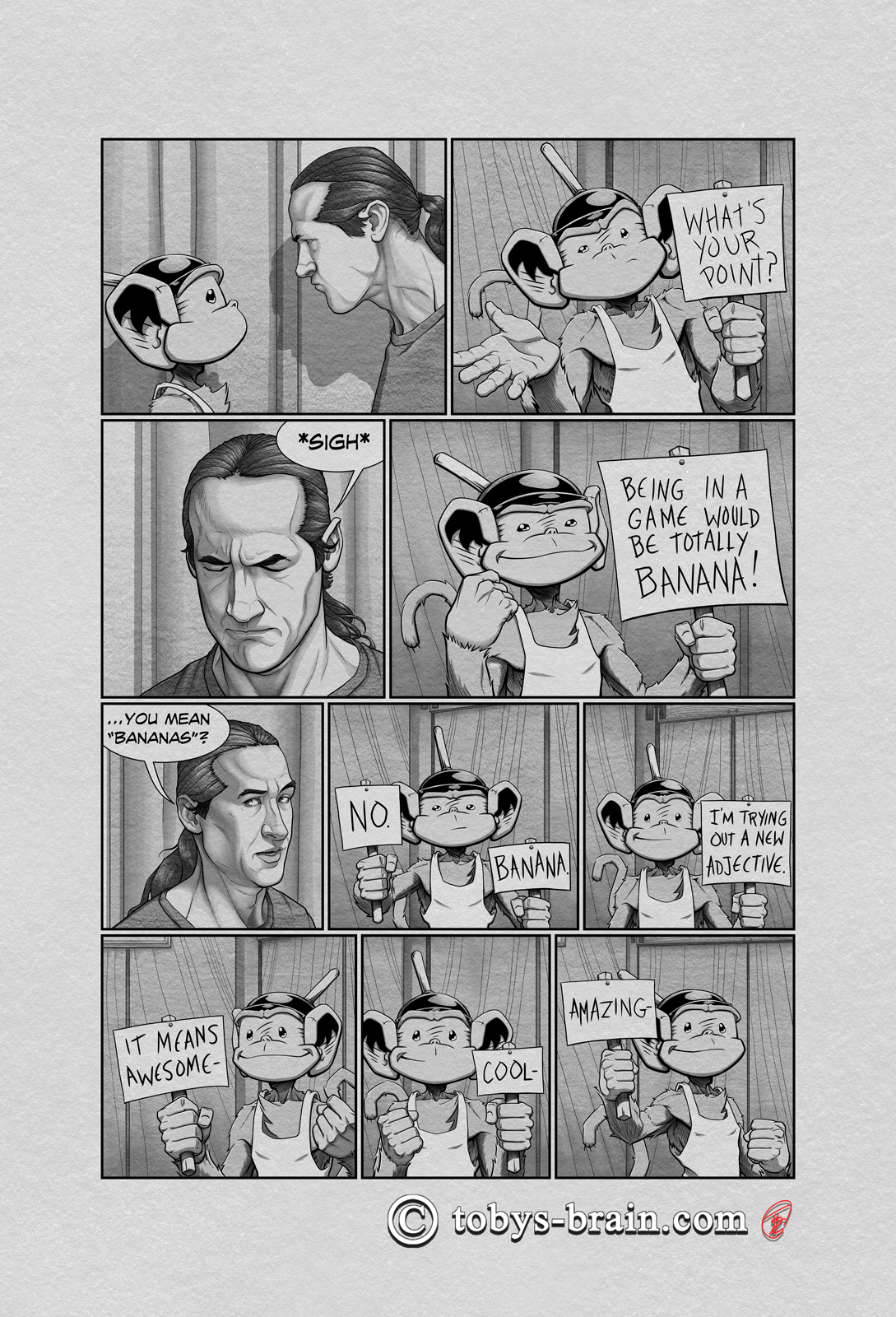 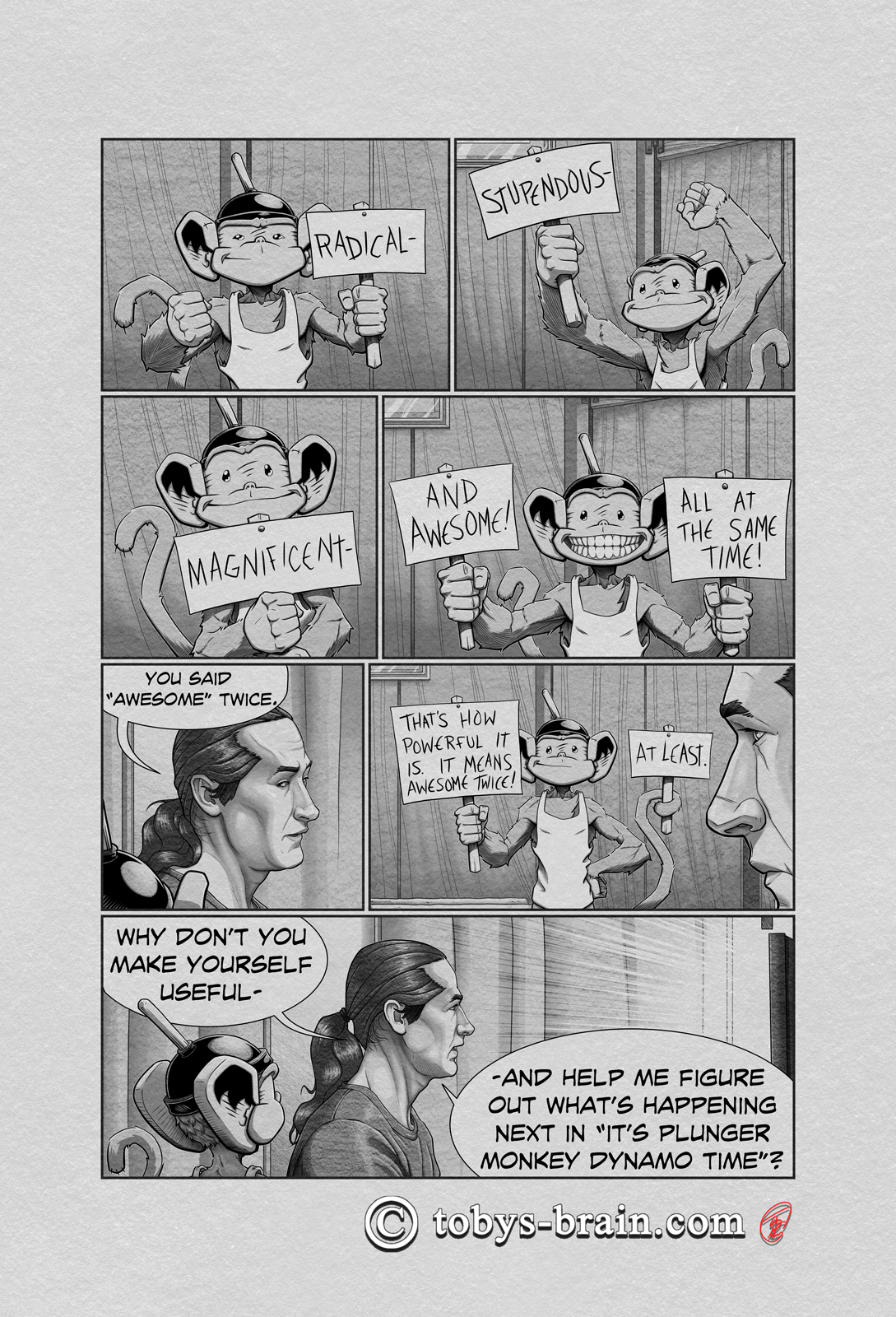 I started a digital sketchbook in Clip Studio that I’ve done a decent job keeping up with, much better than I’ve ever been with a traditional one. I like that I can’t run out of pages in this one. I’ve mostly focused on trying to get better at drawing myself (a perpetual goal) for some comic projects down the line, as well as drawing PMD mimicking me so I can get better at his expressions. I also worked on some anatomy studies and trying to understand the more standard western superhero comic style of rendering. As 2023 is just getting underway, I’m still doing those things, as well as trying to nail down a particular “look” that I can vaguely see that pleases my Brain and incorporates all of the art media that I love: pencil, ink, paint, watercolor, strong paper textures…it might be an impossible task, but I’m going to keep searching.

There was my annual Mother’s Day card in May and birthday dragon illustrations in September for my awesome wife: 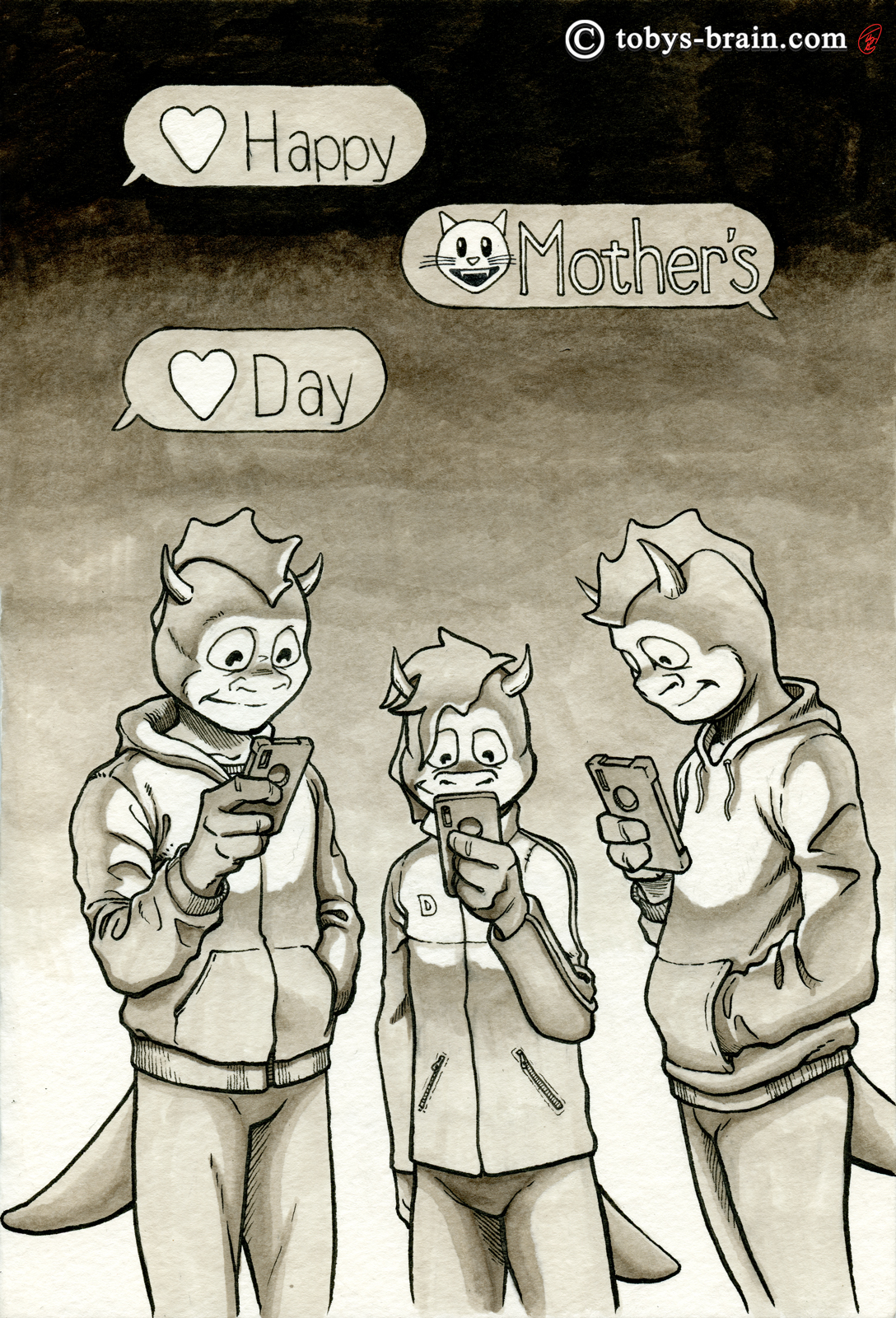 Of course, I did Inktober again, which is always a lot of fun. You can check out all the Inktoberings in the gallery or read the Inktober wrap up blog post just before this one. I won’t repost all the images, because no, but here’s one of my favorites: 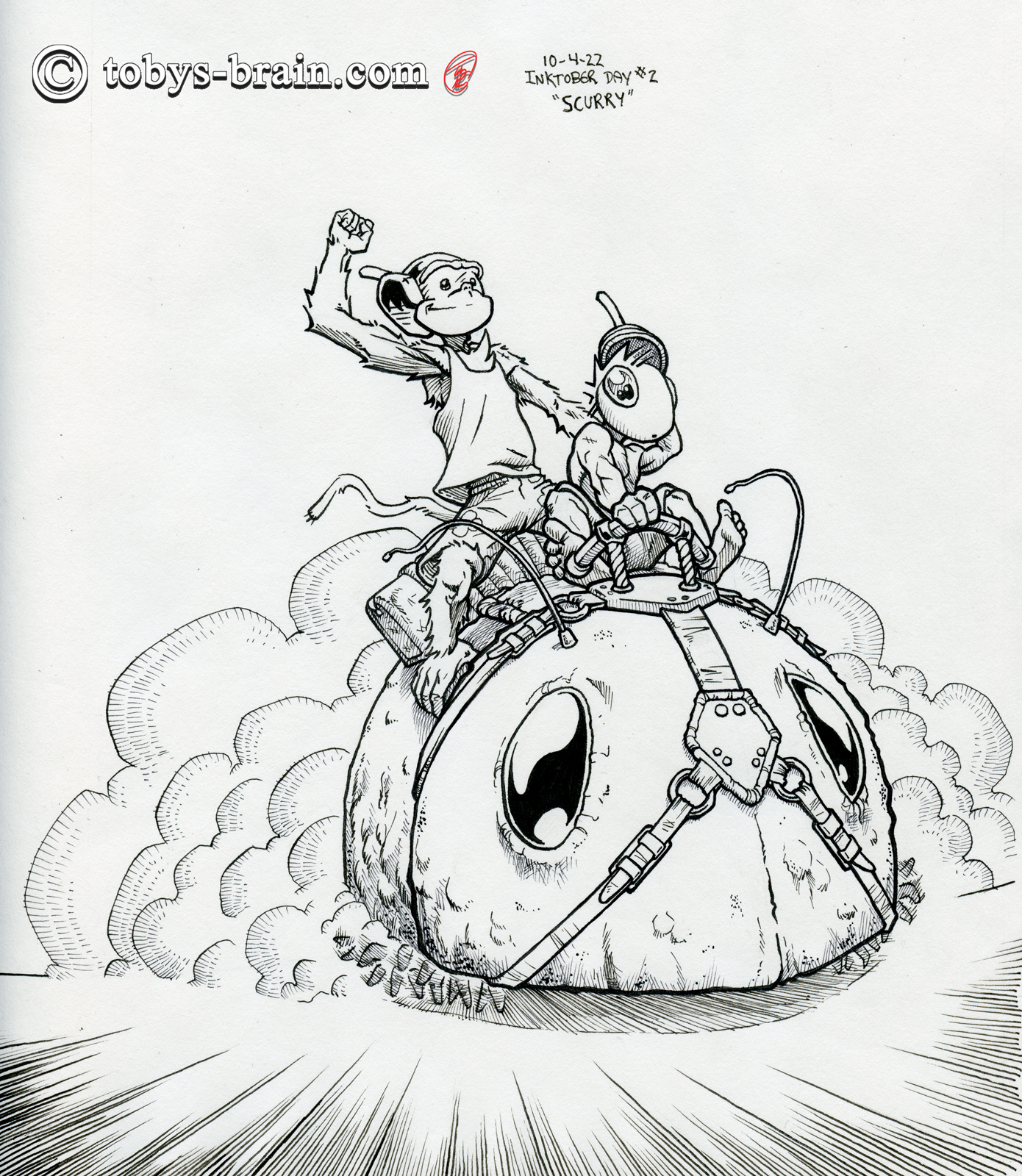 Actually, I was really happy with most of my Inktoberings this year. I just have a special fondness for this one because it was the first time in about a decade I drew something related to my perpetually “I’m going to get to that” project Revery. I was also just happy with the way it turned out, too. I really need to start working on this project.

Towards the end of the year, I was contacted by the “patron saint of my art” author L.S. Gagnon about illustrating a series of covers for her latest book series. I can’t post the images yet, but I stumbled into a style and work flow that I’m pretty happy with. I explored some new techniques and even made more use of Clip Studio’s 3D capabilities.

The bulk of 2022, though, I spent working on Inklings, an artbook collecting 3 years’ worth of my Inktober illustrations, plus some extra bells and whistles. I created custom paper textures, learned how to use Affinity Publisher to assemble a book, and designed 3 themed, pretty complicated and intricate fonts, along with some related header images. It was a ton of work, but very fun. I came very close to completing the whole project in one year, but got sidetracked by other things. It’s been close to two months since I’ve worked on it, I think (if not a little longer), so I can hardly remember where I left off. I know I didn’t have much left, maybe one “goodbye” illustration for the last page, and then distributing some other smaller doodles on all the pages. Once I put the finishing touches on everything, then I have to do the stuff I dislike: actually getting it published and printed. I have my own publishing imprint, and purchase my own ISBNs (which is another process I have to remember how to do), but the big hurdle will be the actual printing. It’s a 300-ish page book of full color images, so it’s going to get expensive. I don’t know if I can do it print-on-demand. I’ve contemplated going the Kickstarter route, and even have some ideas for the special extras for the different tiers of investment…but that’s going to be a lot of work, and will require that I learn how to do something completely foreign and new. Ugh. In the meantime, here’s a preview of some of the pages and the custom fonts, along with the themed headers and the cover. 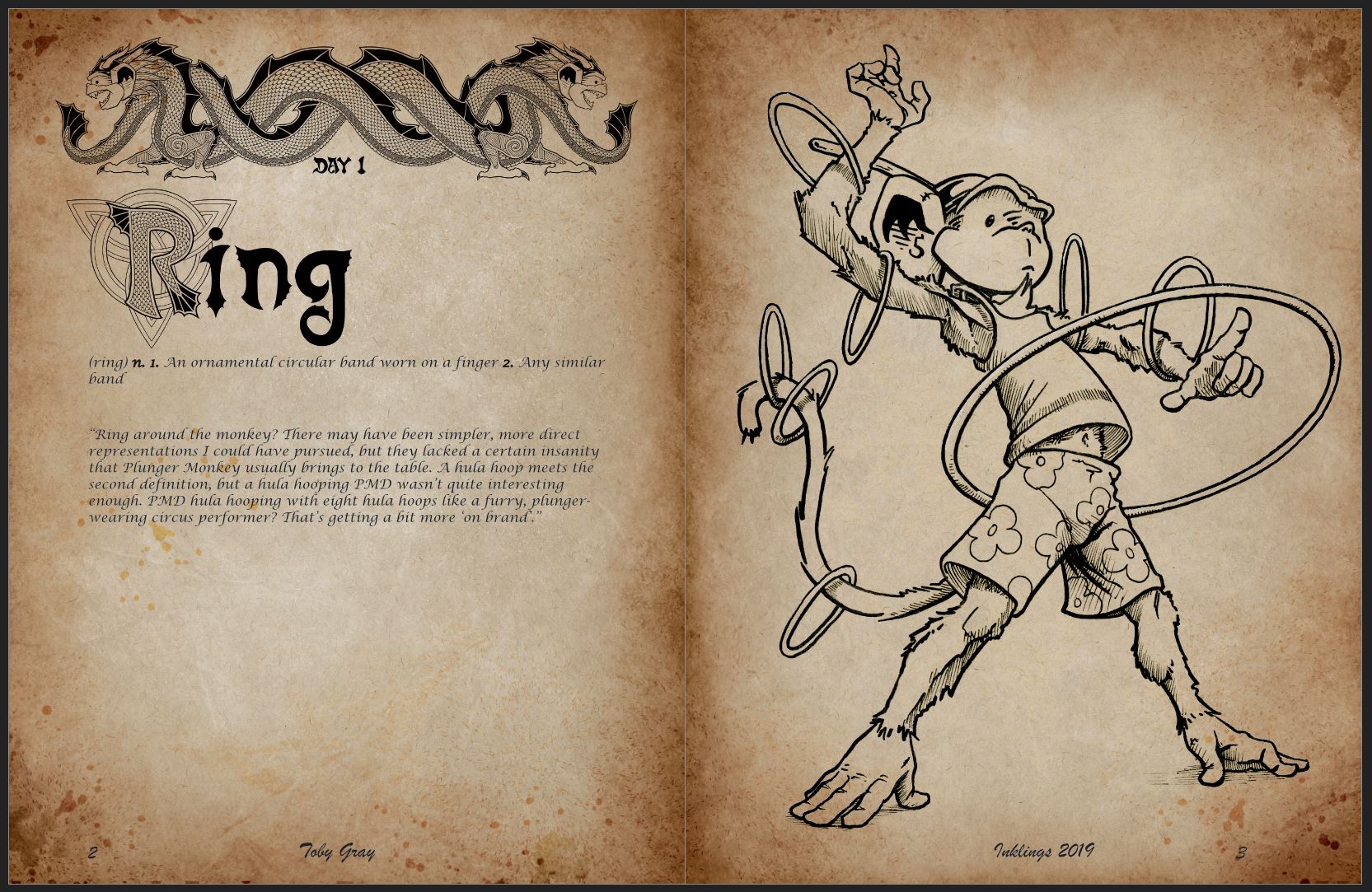 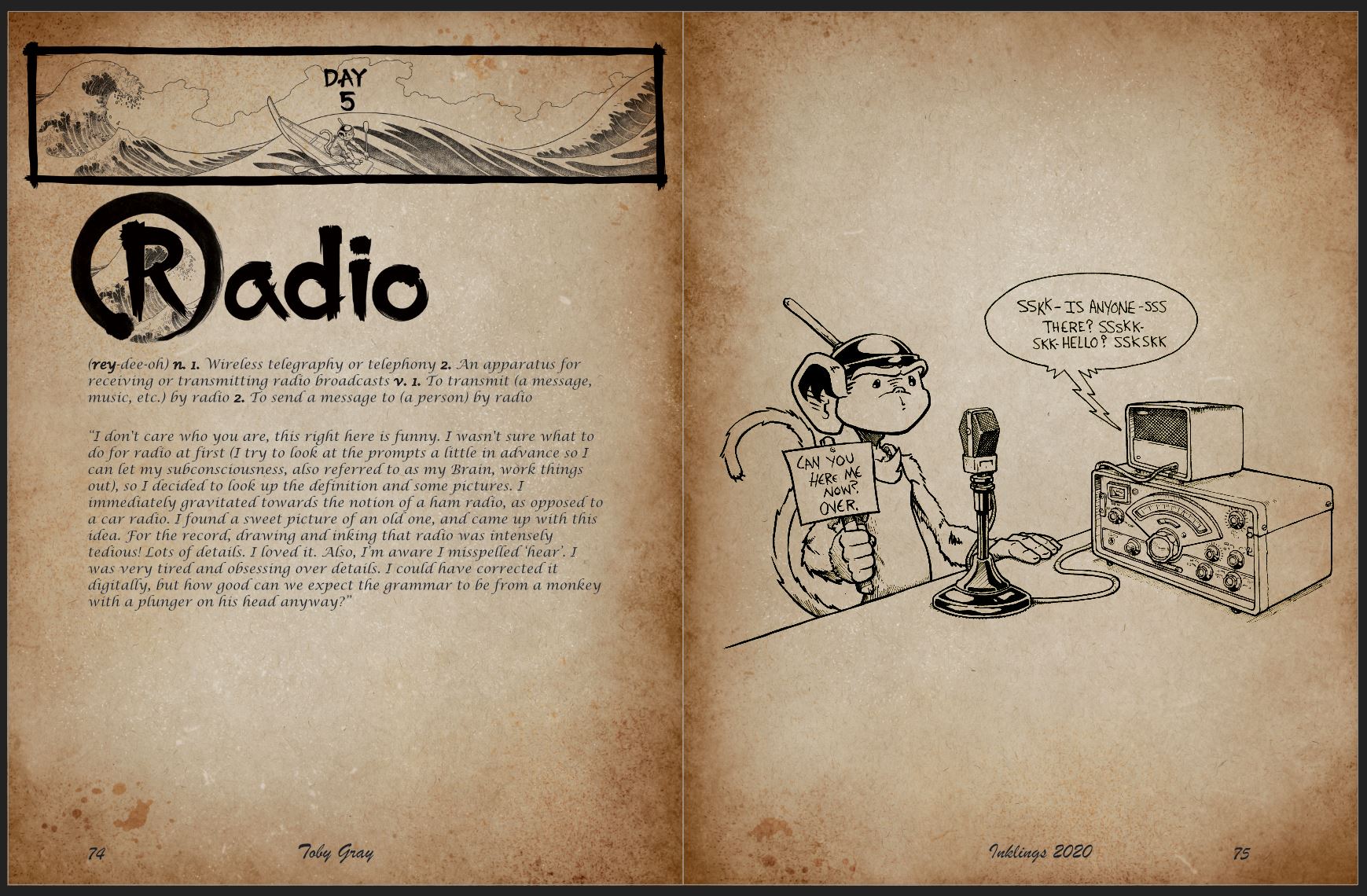 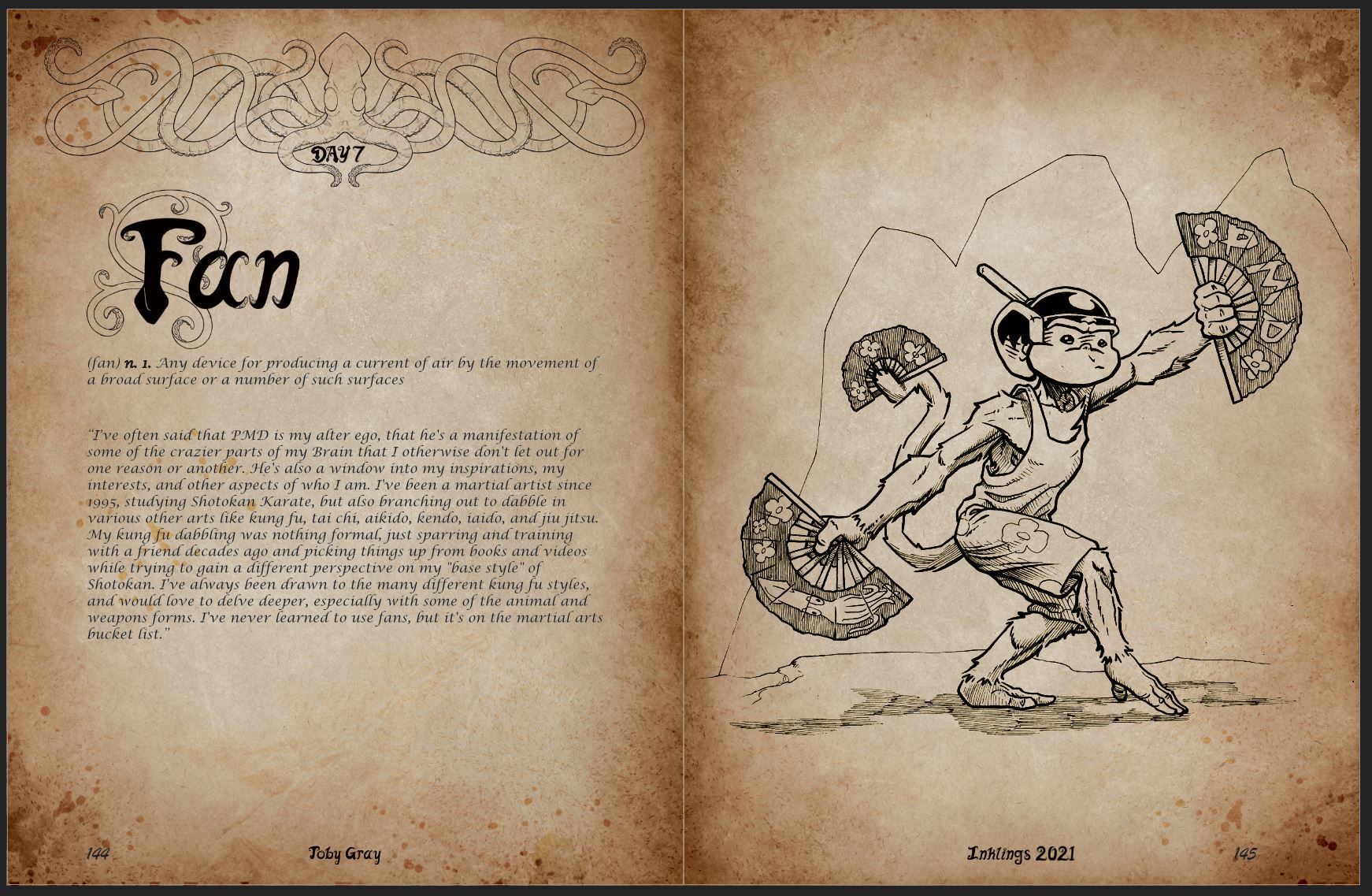 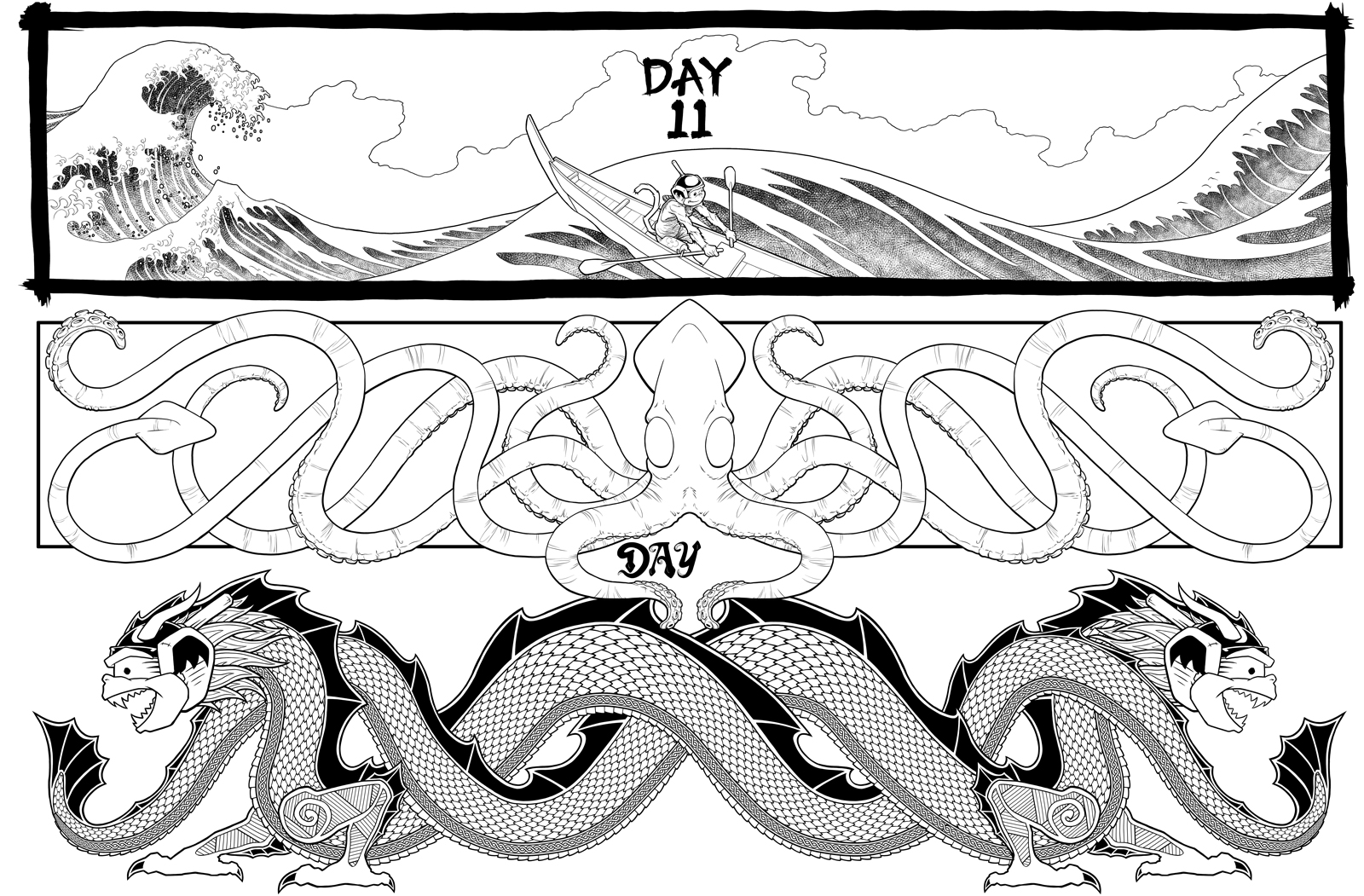 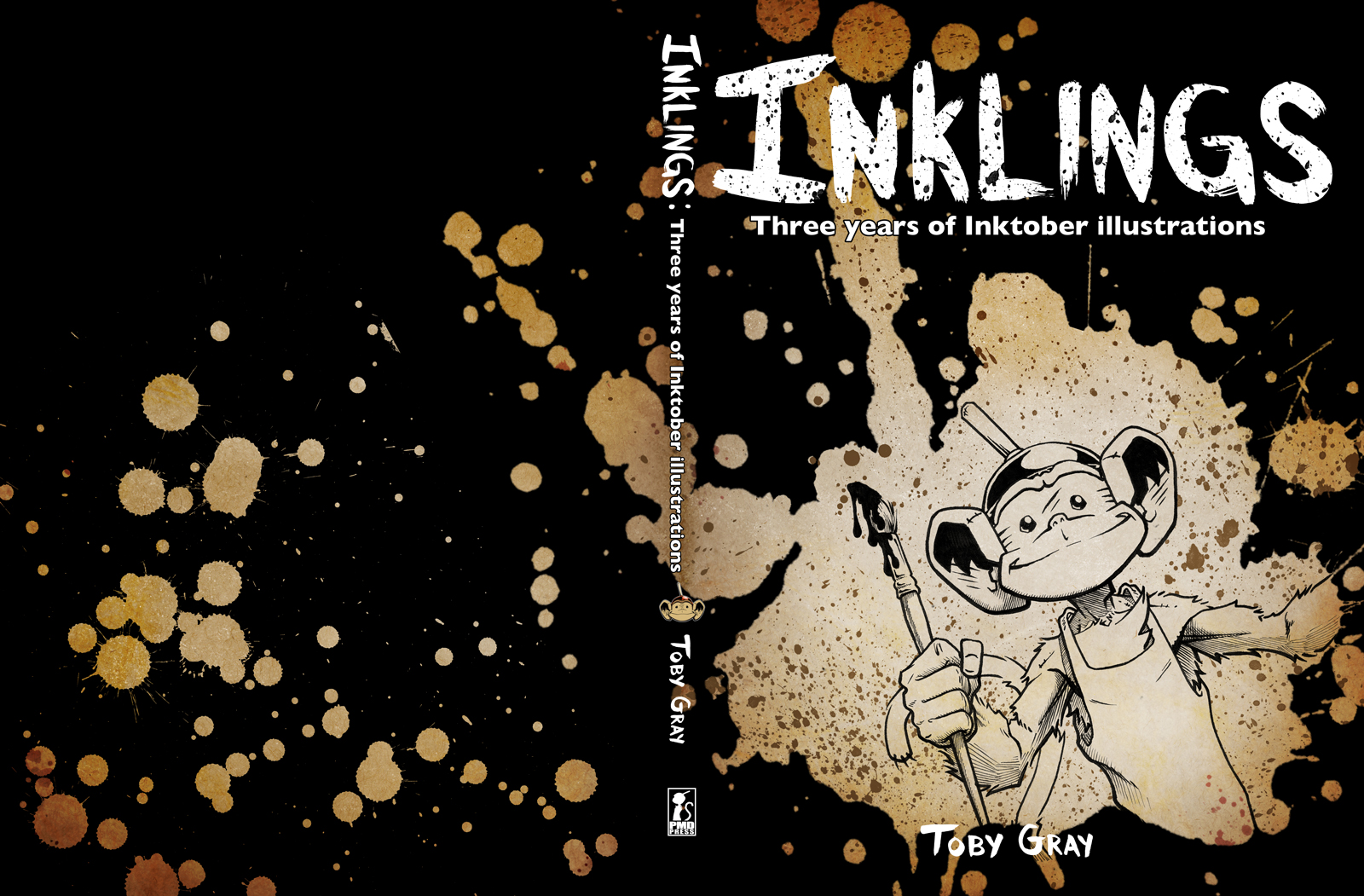 There you have it, Brain-fans. That’s what happened in my studio in 2022. Speaking of my studio…I moved it. Maybe I’ll post about that at some point. In the meantime, here’s to a productive 2023. As always, I’m overflowing with ideas and potential projects, which is a good problem to have after having dealt with the opposite many times in my younger years. Now, it’s time to get drawing!