I’m adding a sub-category to this Studio Stuff installment called Influences. No matter who you are or what you do, someone or something has influenced you along the way. As an artist, I have many influences, but one of the biggest has to be Bill Watterson and his brilliant Calvin and Hobbes newspaper strip. 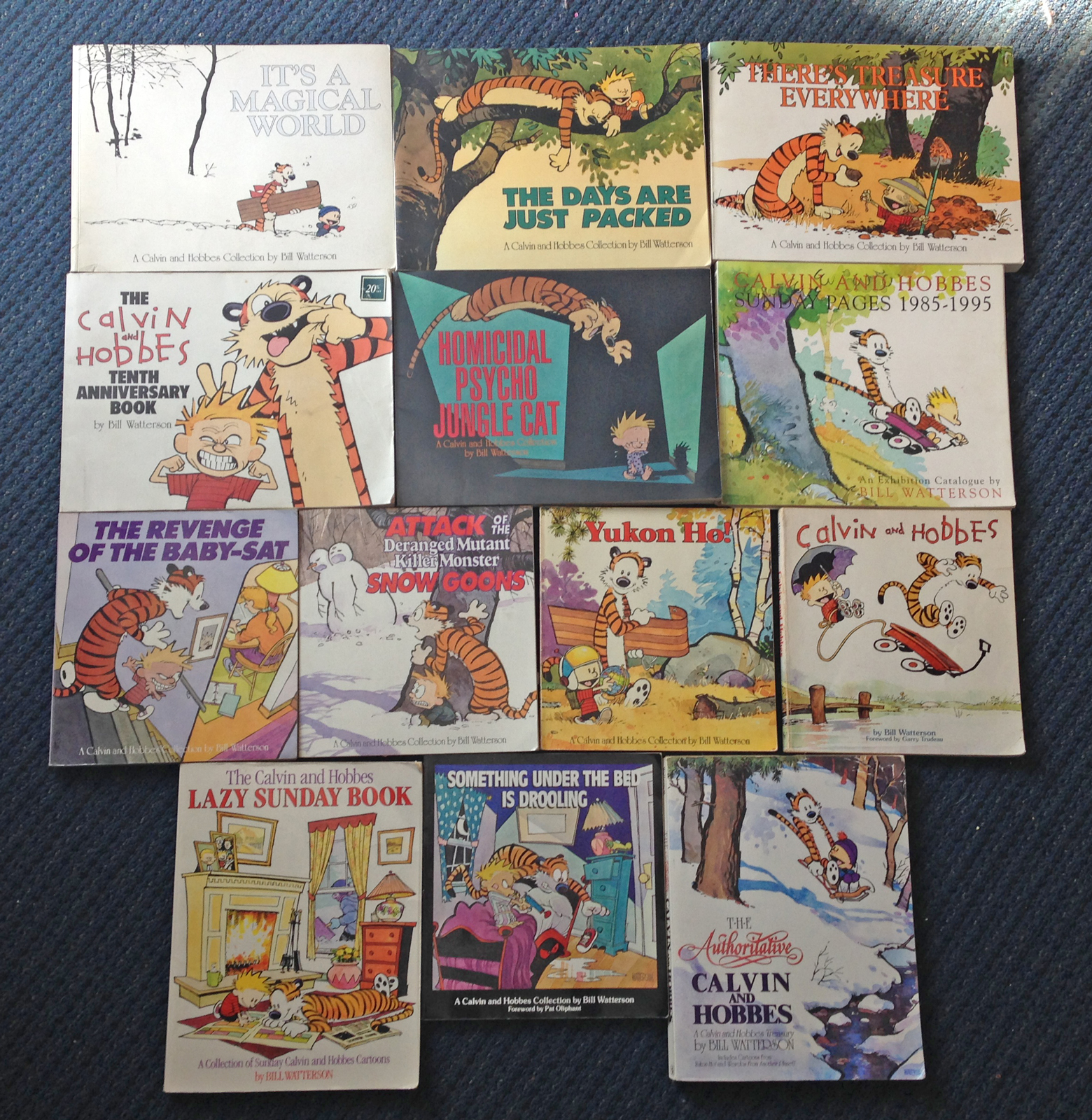 My original Calvin and Hobbes collection…I think this is all of them. I let the kids have access to them, so they frequently disappear and get left in odd places…which has a certain Calvin spirit to it.

If you don’t love Calvin and Hobbes, you’re wrong. There is so much to be enamored with: it’s witty, it’s personal, it’s relate-able, it’s beautiful and it’s hilarious.

I could NOT stop laughing the first time I read this many moons ago. It still makes me chuckle.

I won’t bother giving a synopsis of what the strip was all about, because, really, you should just go find it and read it, you won’t regret it. However, what I personally loved about it (aside from the visual elements) was that it was very similar to the things going on in my head. It was a kid with a vivid imagination going on amazing adventures, lightly sprinkled with some deep thoughts here and there. Granted, Calvin got into a lot of mischief that I never did (perhaps that’s another reason I enjoyed it-he would do things I never dared), but that always seemed secondary to his vivid imagination for me. I mean, central to the whole strip is whether or not Hobbes is real but adults can’t see him, or are Calvin’s interactions with Hobbes purely in his mind. Watterson has remained intentionally vague about that issue.

Plus, you have to respect a creator who turned down potential gazillions of dollars in merchandizing in order to keep his creation pure and to maintain control over it. People thought he was crazy, especially his syndicate and the others who stood to profit immensely off his hard work, but he stuck to his guns. As he so eloquently puts it in his introduction to The Complete Calvin and Hobbes: “I didn’t think greeting cards, T-shirts, or plush dolls fit with the spirit or message of my comic strip, and I didn’t like the idea of using this hard-won, precious job to peddle a bunch of trinkets. I wanted to draw cartoons, not run an empire,…” and “All I can say is, I worked too long to get this job, and worked too hard once I got it, to let other people run away with my creation once it became successful. If I could not control what my own work was about and stood for, then cartooning meant very little to me.” He took a principled stand, stuck to his guns in the face of extreme financial temptation and outside pressure, and reaped the creative benefits. He also kept his integrity and walked away from the strip when he felt it was done, when he had said all he had to say, rather than wait until it grew stale or stagnant. 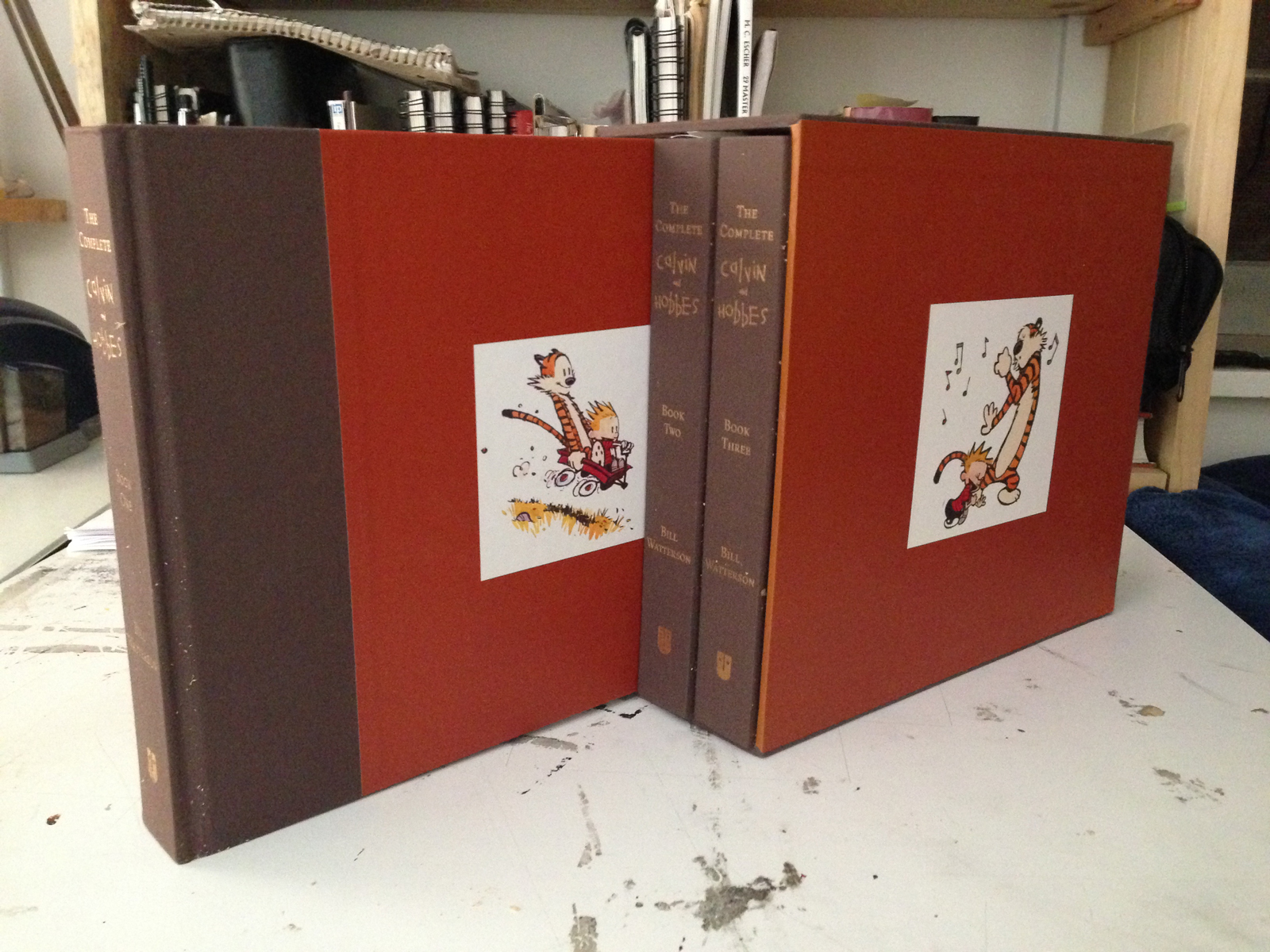 These books and their contents are beautiful and precious to me. And they smell wonderful…yeah, I said it.

Because of his rise in popularity and the stance he took, he was able to push the boundaries of the normal Sunday comic strip format, harkening back to the days when an individual strip could take up half a page or more in a current time when newspapers crammed as many 3 panel talking head drawings on a page as they could. 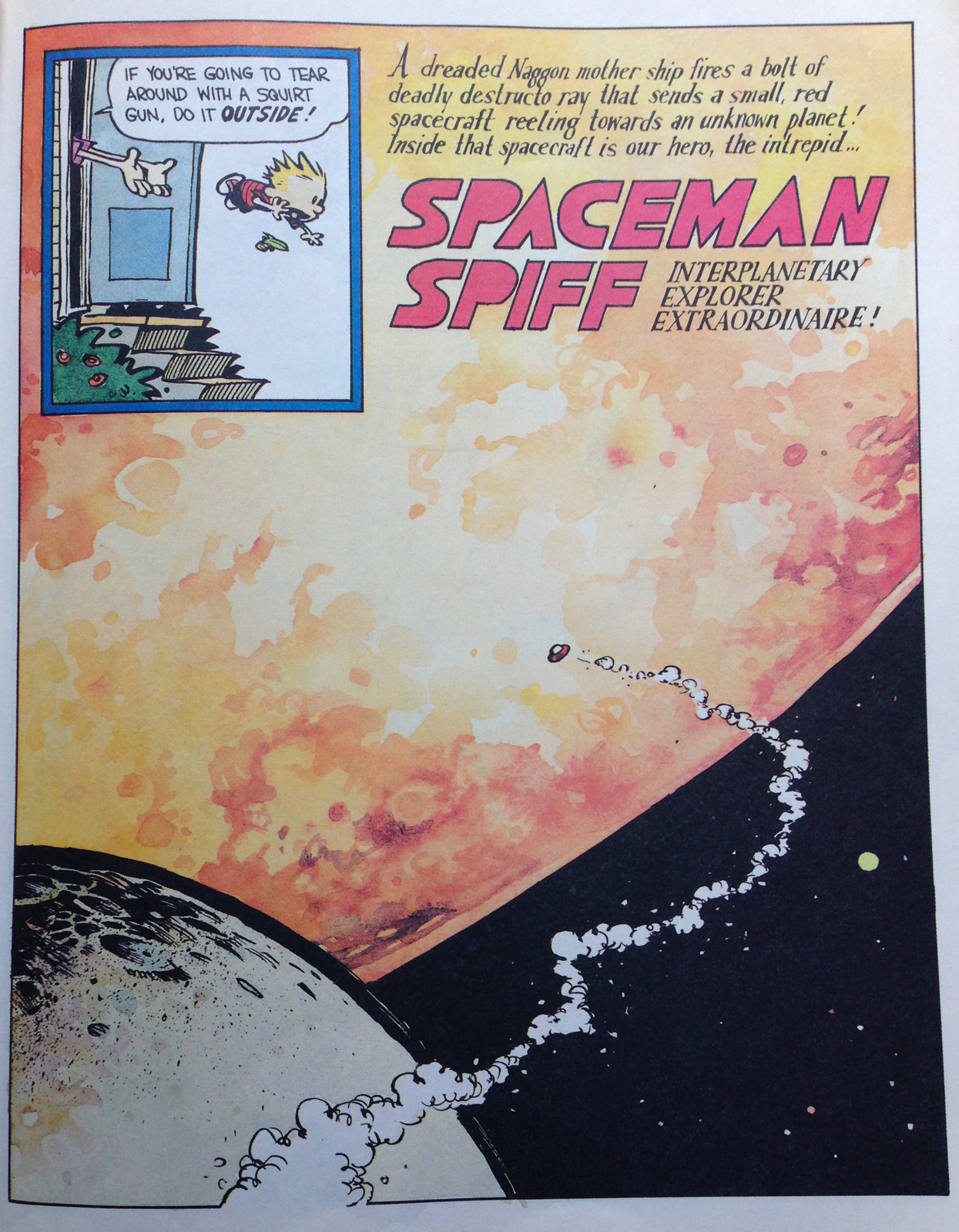 Absolutely stunning to look at.

Watterson’s “style” has had a huge impact on the way I draw, especially as I’m getting older. You couldn’t look at any one of his panels and call them photo-realistic, but there is a very high level of simplified detail, the right gestures, the textures, all of which combine into a very highly stylized realism. He makes just the right marks and packs them with life and character, and no more. His water colors are gorgeous, they’re vibrant and alive, and he matches them up with that amazing line/brush work perfectly. In that Spaceman Spiff panel above, there’s just so much going on there to ogle. The texture of the moon, which really there isn’t much, just enough to give you the impression of it’s surface. The character of the smoke trail and the way it breaks the panel border on the bottom. And of course, the colors and textures of the water colors. If I could eat art, this would be yummy.

(Hey, remember where you are, you’re in Toby’s Brain, not polite society) 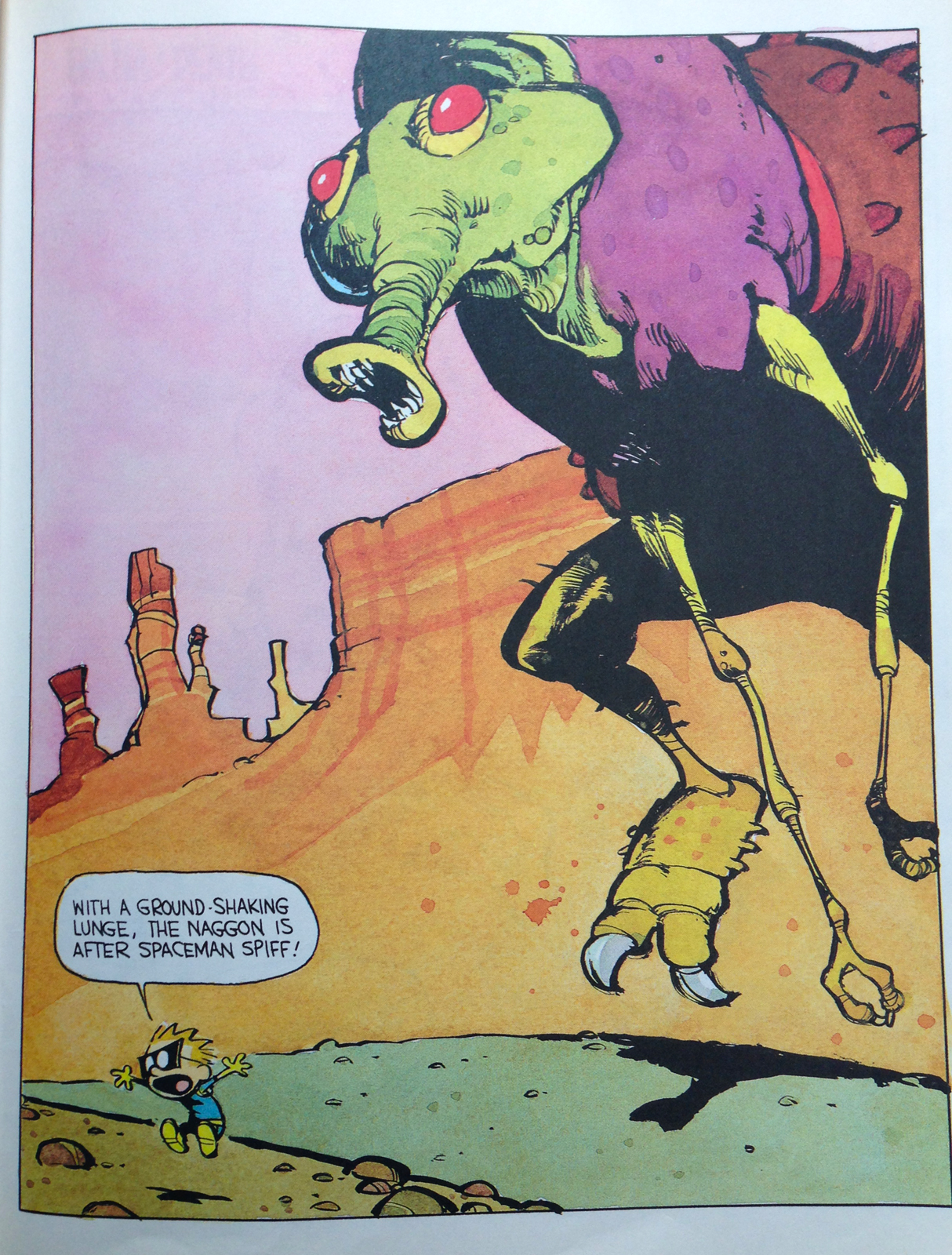 Again, the colors, the textures, the lines, the gestures, the energy, the scale, the back ground…I could stare for hours.

I’ve always been a details obsessed artist.  I get caught up drawing the little bits that no one will ever see (to my detriment, sometimes). Over the years, I have learned a lot by looking at Mr. Watterson’s art, and I can stand to learn a lot more. He throws simplicity, detail, impression and personality into a blender and produces awesomeness. His line work heavily influences the way I draw Plunger Monkey. Heck, my Cobbly character Adarax (you can find some images of him in my gallery) has Calvin’s hair as a blatant nod to Watterson’s influence on me (and the years of joy Calvin and Hobbes gave to me). I gave my oldest son a stuffed tiger and named it Hobbes before he was old enough to name it himself. In a box somewhere I still have a short children’s book I wrote and drew for a school project (junior high, I think) starring Calvin (my apologies to Mr. Watterson).  If I had a clue as to where it was right now I’d post it.

Anyway, Bill Waterson’s influence on my own “style” has been and continues to be huge. Calvin and Hobbes holds a very special place in my heart, I found it at just the right time of my artistic development. Flipping through 10 years of this strip brought back a flood of fun memories from my youth. I may have to make it a habit of reading the entire collection every year, I’m realizing it’s been too long since I have.

I know he’s a private guy, hardly anyone knows what he looks like despite his fame (which is kind of impressive), but I hope to one day meet him, shake his hand, and say thank you (and then probably turn around and walk away, because I believe we are both introverts). I know there must be thousands, perhaps tens of thousands (maybe even more?), of artists/fans who were motivated and influenced by his brush strokes. 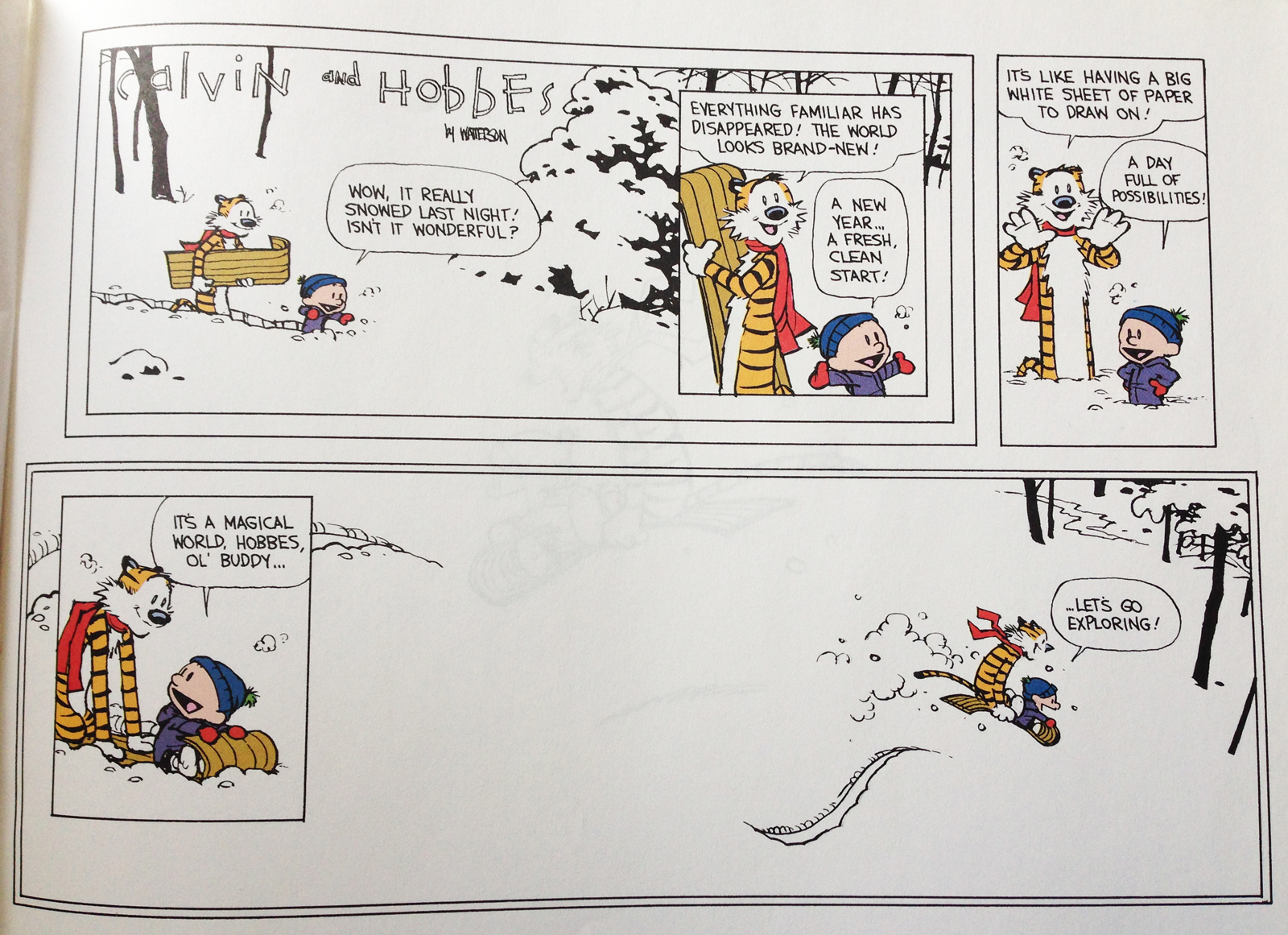 Though beautiful and brilliant, this will always be THE saddest and toughest to look at Calvin and Hobbes strip, as it was the last one.