So much for my unofficial resolution to update the site once a week, oops! I was otherwise swamped working on the latest commission, which I think is done and just awaiting final approval and payment, and for the first time it wasn’t for author L.S. Gagnon! I guess I’m branching out a little. I’ll get into the challenges I faced on that cover when I post about it, but basically I had to employ some new tricks, build a few more brushes, and in general push my skills. As usual, to my eye, the final product has some issues that I wasn’t able to fully resolve, but I think it represents progress.

Anywhat, I’m still trying to catch up on posting various projects I’ve finished up over the last several months, and today’s installment is one (of several) for L.S. Gagnon, namely the cover for the fourth installment in her Little Witch series. 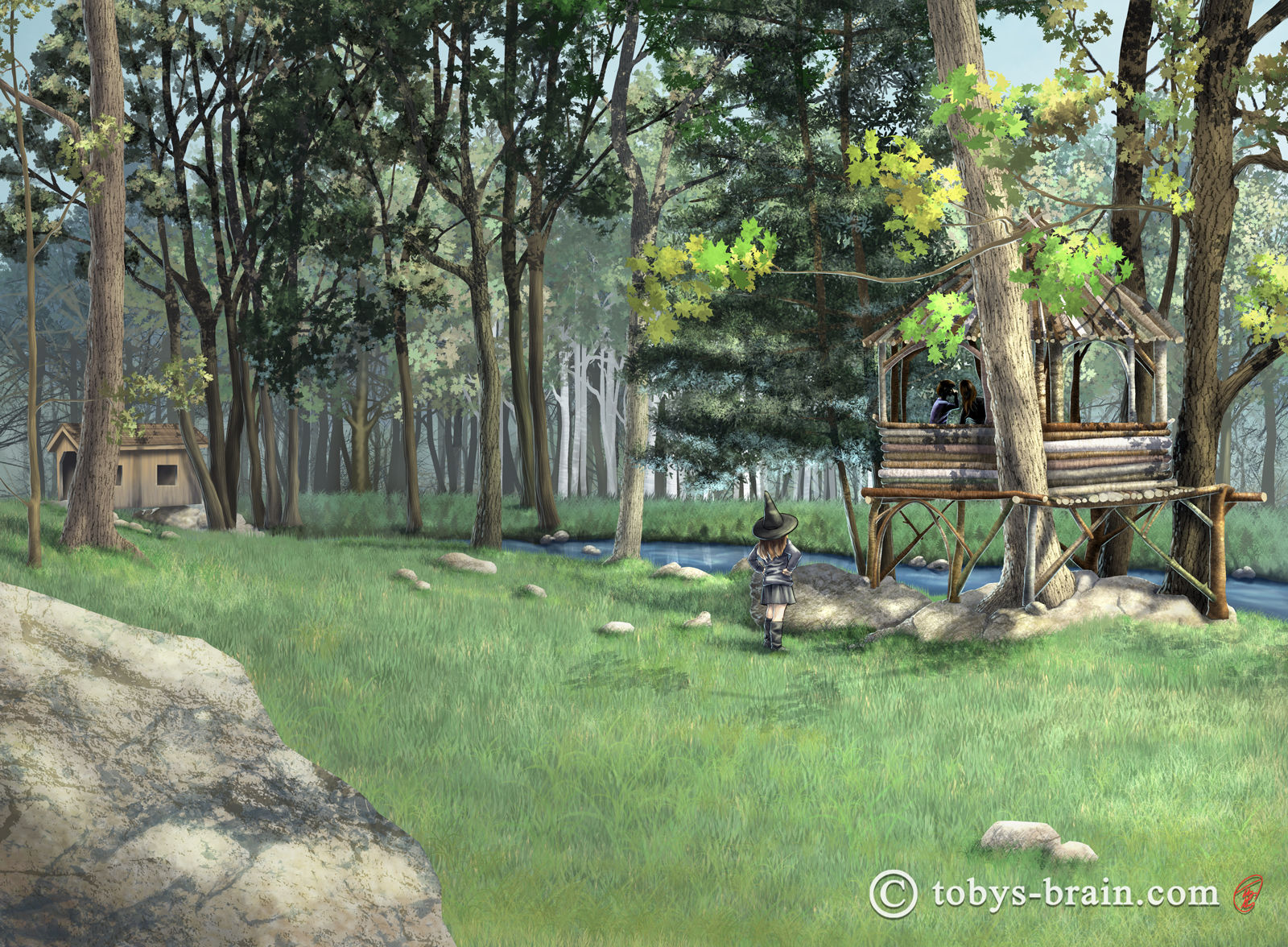 If you guessed I had to build a bunch of foliage brushes while working on this cover, you’d be right.

This scene is actually more or less part of my back yard. I’ve mentioned before that both myself and my kids have taken turns as characters in these books, and this particular story happens to involve my kids’ adventures with the main character, young Thea, set in and around a fantasy version of our yard. That tree fort doesn’t exist quite yet, but the platform in that location does.

I spent a considerable amount of time building various texture and foliage brushes to work on this cover. The brushes themselves still need some tweaking, and I need to learn how to use them better, but overall they worked well. I think I ran into an issue of adding too much detail (a life-long art problem for me), thus distracting from the focus of the cover. I should have blended some of those textures in better, and pulled back on some of the details in the background to help draw the attention to where I wanted it, but this cover in general was pretty daunting. It highlights for me that I need to spend more time working on landscape paintings and drawings to improve my visual knowledge base and skills, something I definitely plan on doing as my schedule allows more time.

Just for fun, and so you can understand the amount of work I often put into these pieces that never gets seen, here’s the background for this cover that is almost completely obscured in the final: 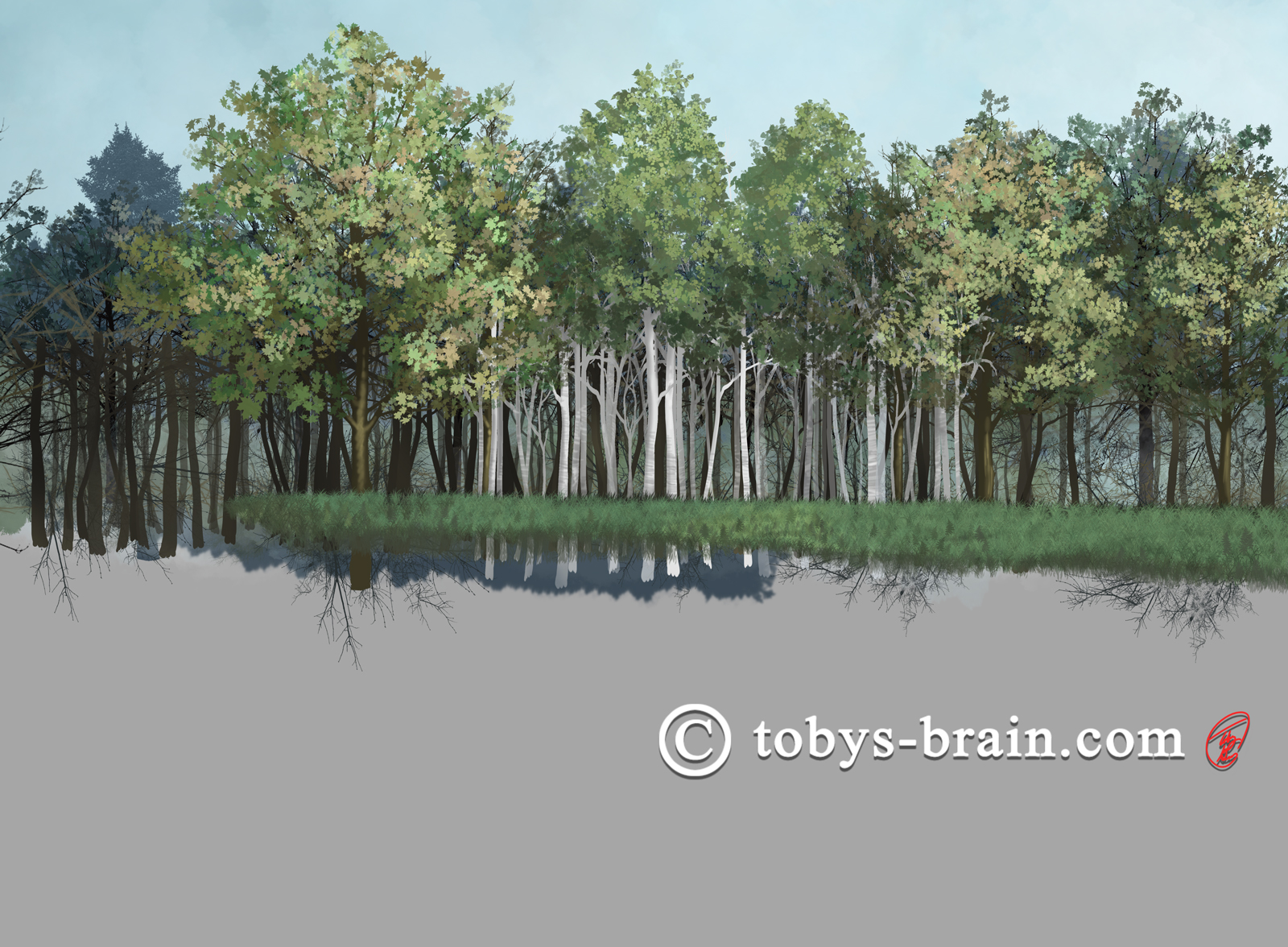 I think I’m happier with the background than the foreground, but that might be partially influenced by the fact that this is virtually invisible on the cover.

After working on this cover, I did a series of story illustrations (that I think I’ve mentioned in previous posts) to go along with the four books in the original series. They were a lot of fun to work on, and I’m pretty pleased with the way they turned out. Look for a post about them next. With those and the non-witch series cover done, I’m free to work on whatever I want right now. I’ll be putting some effort into IPMDT for sure, but I’m also intent on finally finishing 10 Things and getting it ready for…something. Perhaps self-publishing, we’ll see. I need to get the t-shirt thing squared away, because this is just getting ridiculous. I know at least a few PMD shirts would sell (especially after learning about my young fans down south of me). I need to spend some time on my wife’s xmas gift (I haven’t forgotten), and I’m kind of getting excited about working on the short comic book collaboration with her (stylistically it should be fun, and as I said, it should be relatively short. It’s always nice to have projects with a foreseeable end point/goal).

Speaking of 10 Things, I think I just blew most of the time I was going to spend working on that posting and updating. Hrm. Maybe I’ll spend a little time reacquainting myself with that project, it’s been a long time since I’ve worked on it. I think I need to shuffle my file structure around for it, since I’ve changed the way I organize things since I first started it.