Well, it’s a few weeks late, but I finally pulled off the next phase of my wife’s birthday giftage: custom shirts depicting the dragons I draw for her birthday. I attempted yet another new process, and I had to hide my work from her again, and life was getting in the way, but, I got it done. Right now, her shirts are the only ones. If there’s enough interest or encouragement, I may release them to the public at large as their own line of shirts: Lee’s Dragons.

Anyway, about that new process. I uploaded all the layered PSD files of the three dragons I’ve done so far to Creative Cloud, then opened them in Affinity Designer onto an artboard. There are a lot of cool features in AD, and one of my favorites right now is working on an artboard to generate different ideas and iterations of something. This allowed me to set up the three shirts side by side and make global changes to the extra elements I was adding. That brings up another pair of powerful features: symbols and assets. I can select anything on a layer, or a whole layer, and save it as an asset. I can then drag and drop that asset into another file whenever I want. So, when next year roles around and I draw another dragon, I can very easily set it up in the custom frame with the custom font to turn it into a shirt. The other part of that is I can turn elements into symbols. For example, in the images below, I saved each element of the frame as a symbol (the outer boarder, inner boarder around the image, the blue background, each letter of the font, etc). Every time I placed one of those symbols anywhere, either within the same image or one of the other images on the artboard, they were all linked. So, if I decided to change that background color from red to blue (which I did), I make the change to one and then ALL of them update. Should I decide that I want one shirt to have a blue background, but another one red, that’s no problem. I can go into the symbols studio and temporarily turn off the syncing, make my change, and then turn it back on so if I make further global changes (like transforming the size or shape) it will update across the board.

Anyway, here are the dragons with their nifty new borders and fonts. 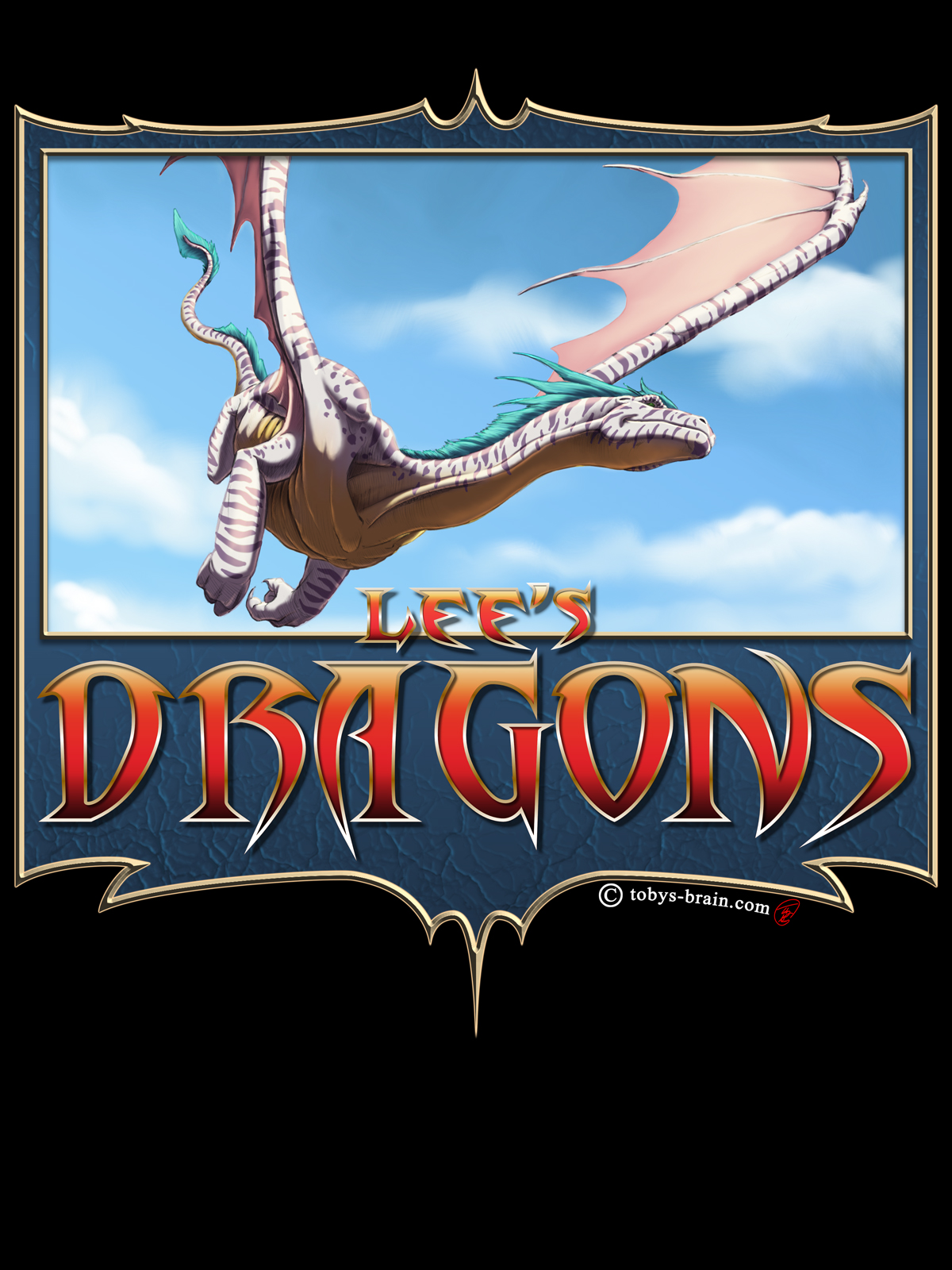 The Teal-Crested Leopard Dragon from 2016, created on my Samsung tablet in Sketchbook Pro. Frame and font in Affinity Designer. 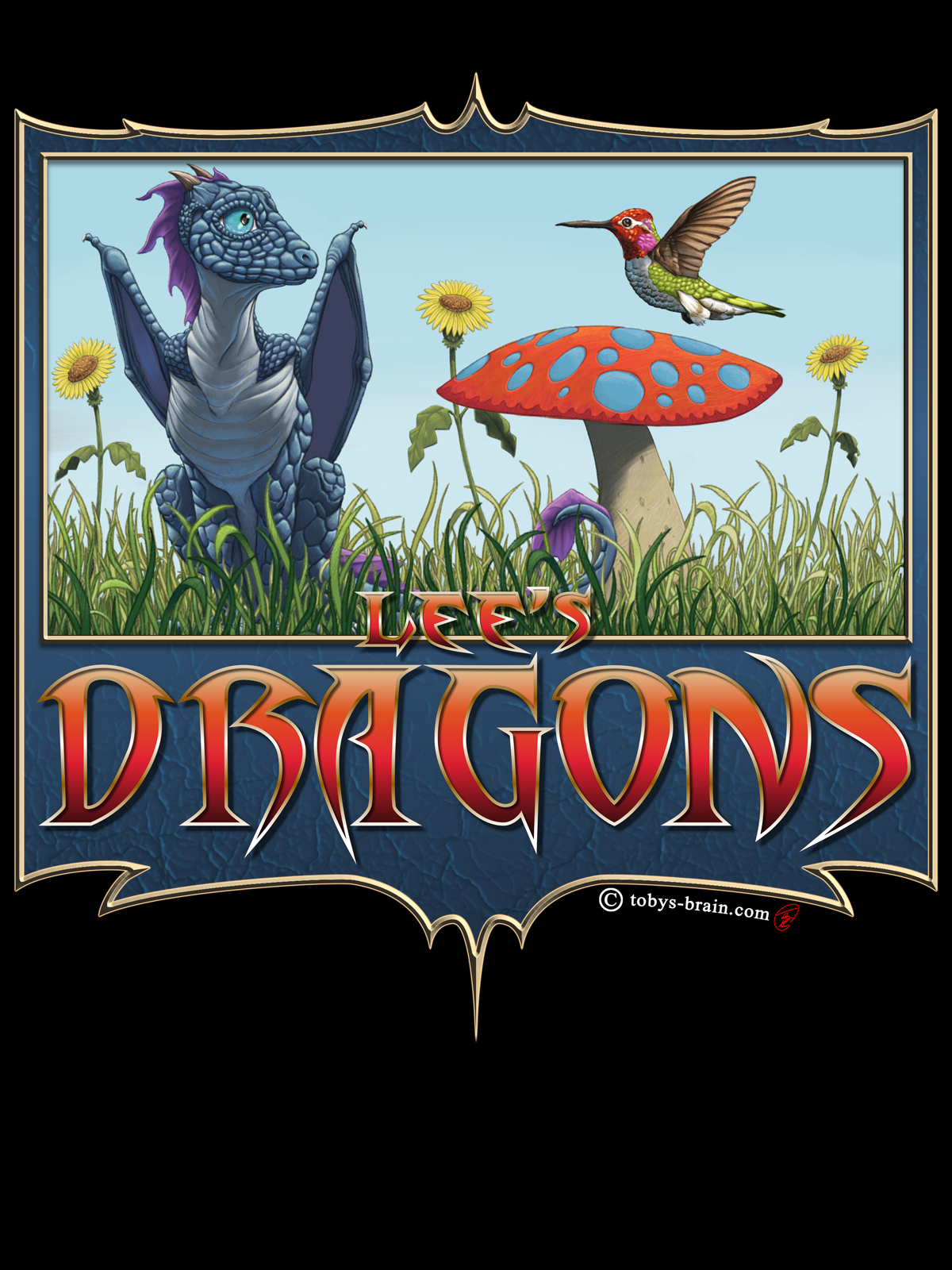 Dragon and Hummingbird from 2017, done in Sketchbook Pro on my old Samsung Tablet, with a little editing in Photoshop. Frame and font in Affinity Designer. 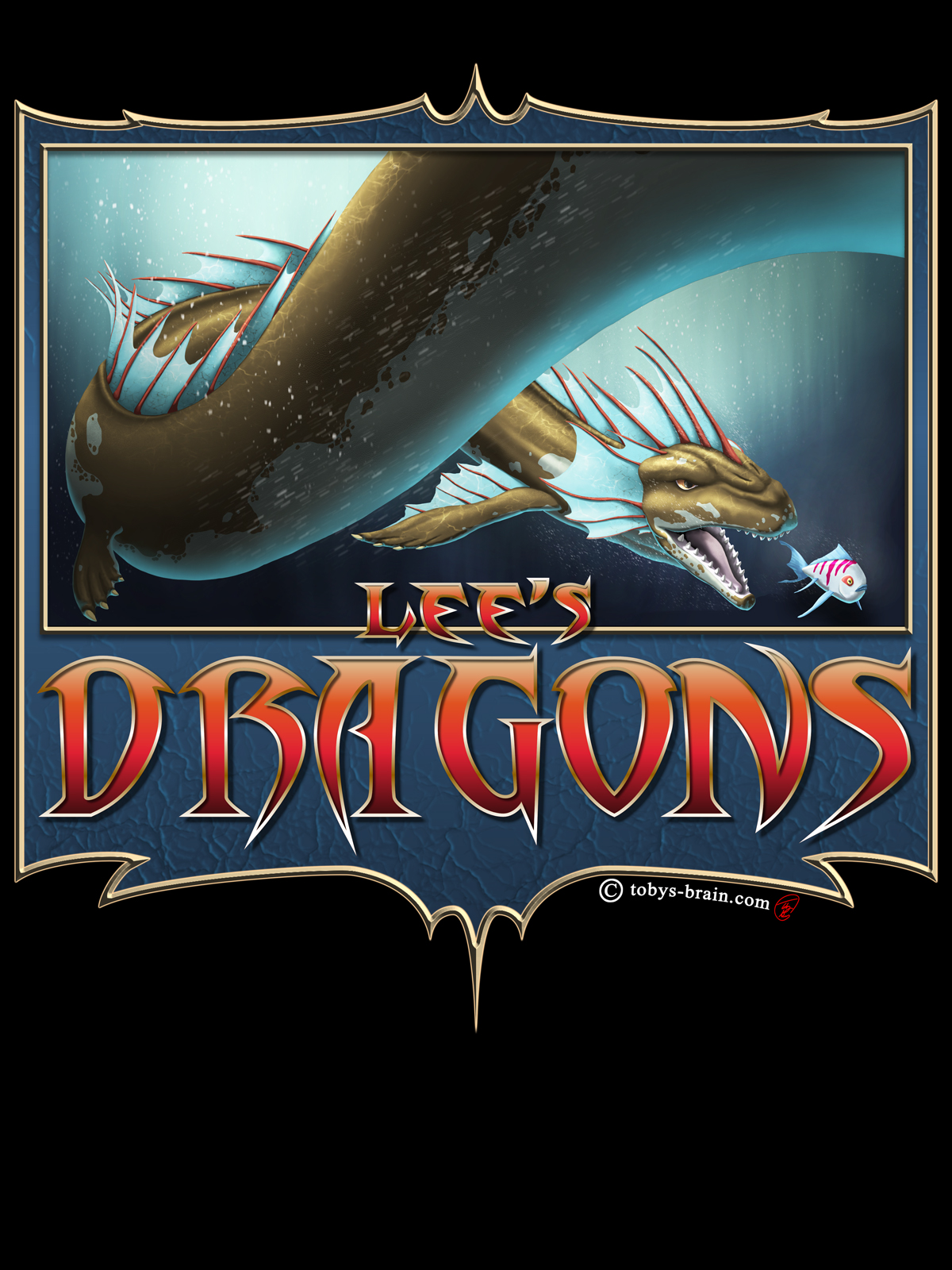 The Sea Dragon from 2018 done in Procreate on my iPad Pro. Frame and font in Affinity Designer.

Here’s how they turned out: 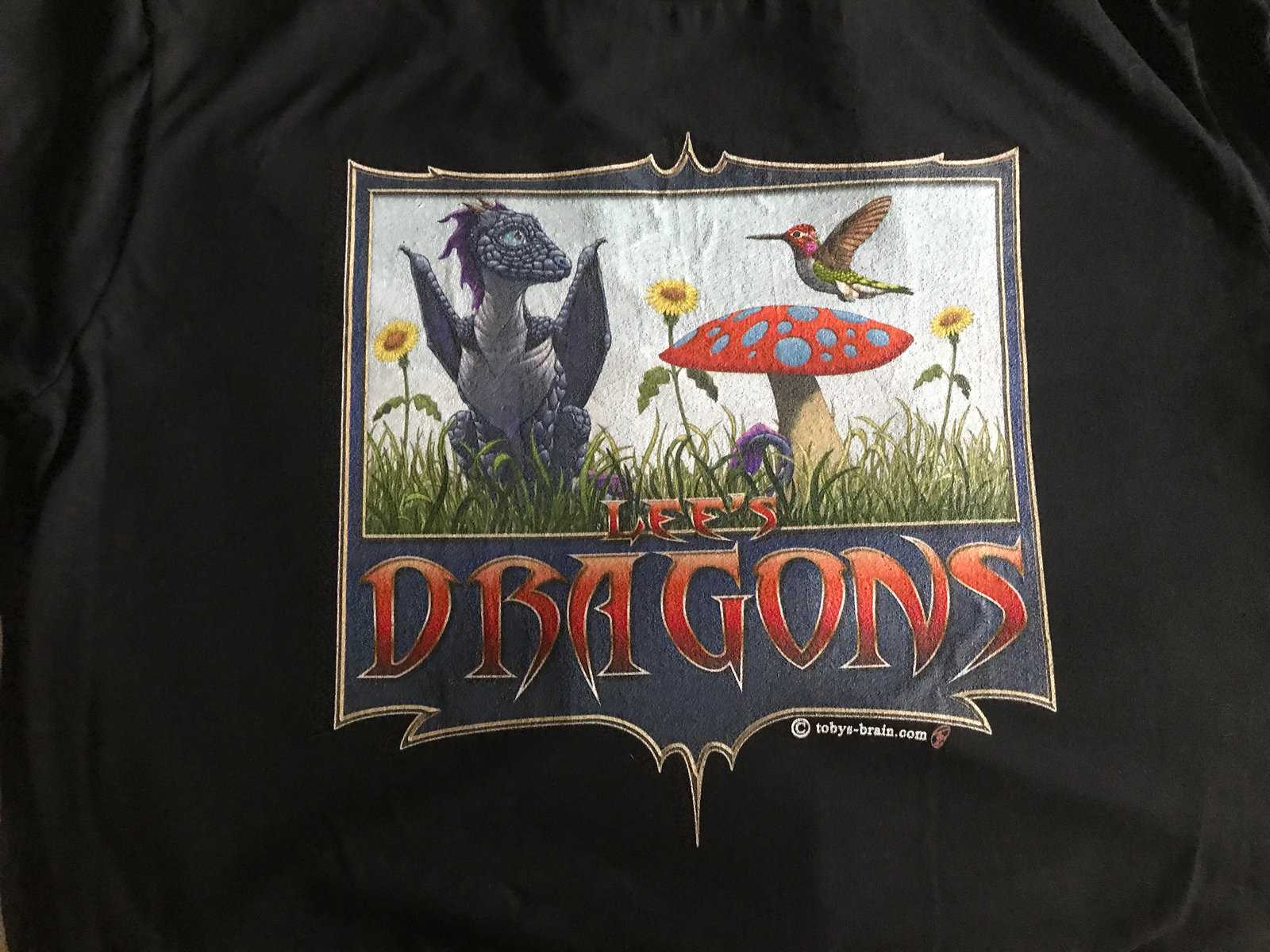 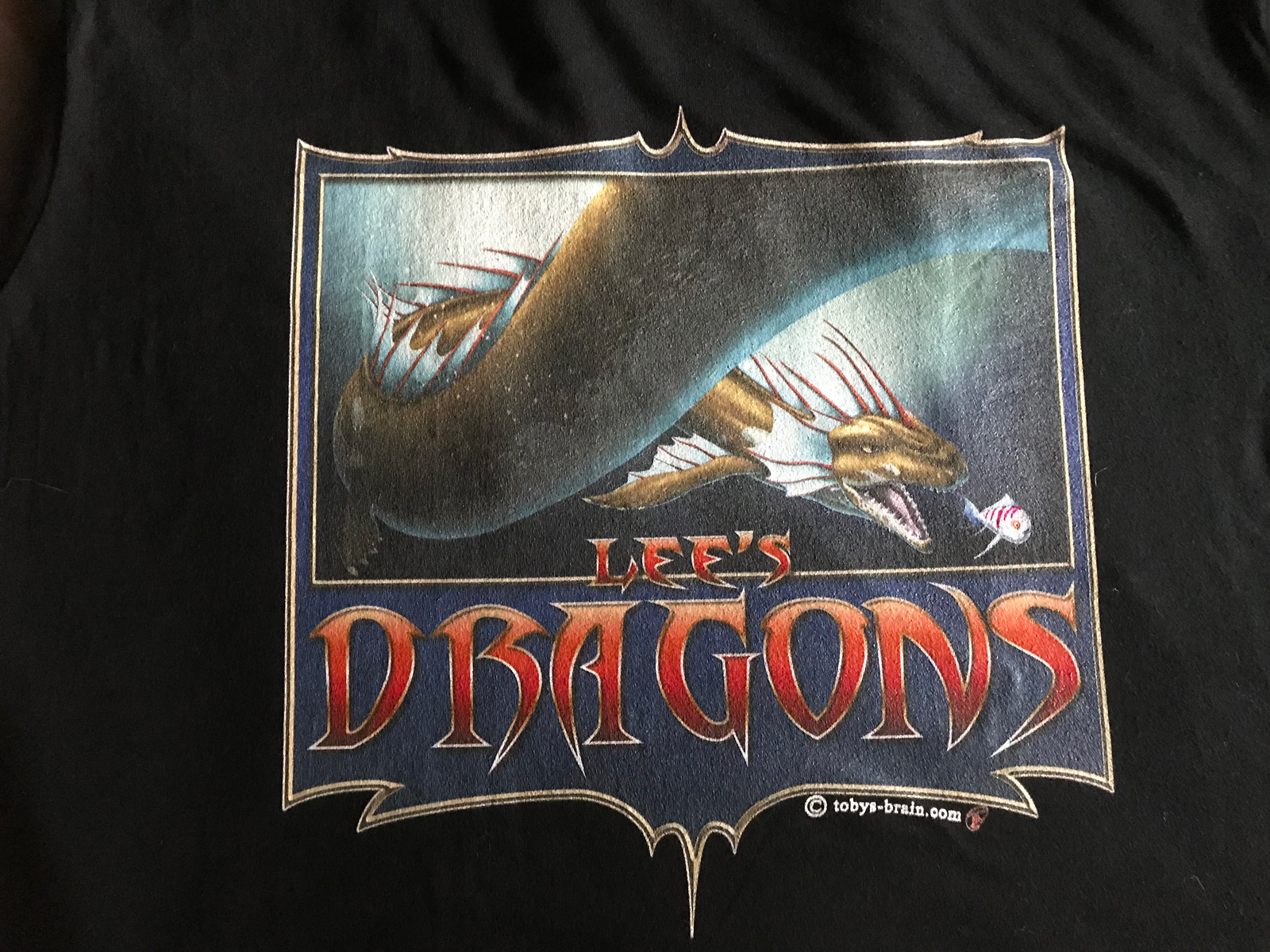 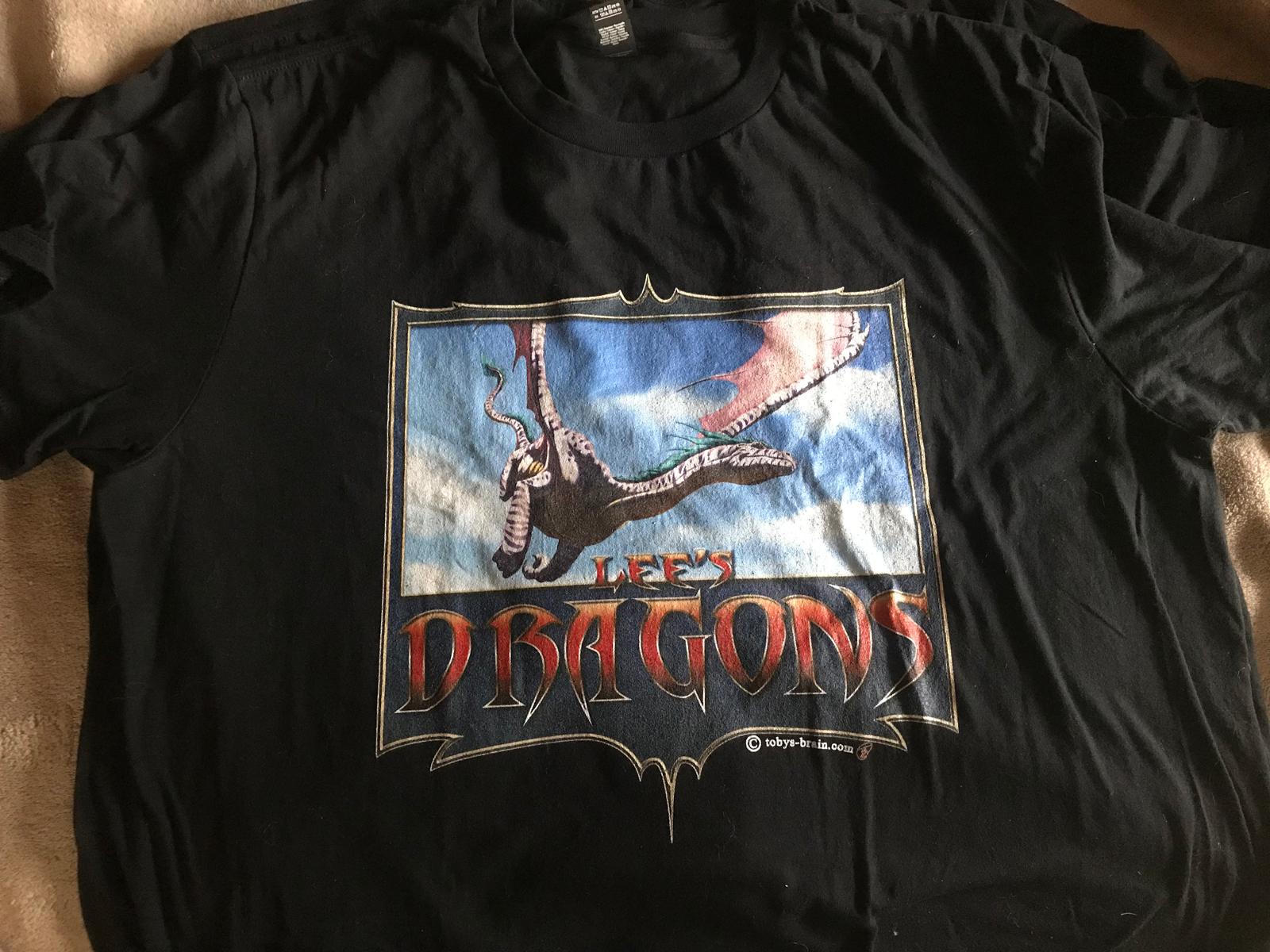 I’m excited to have made this happen, but I’m not happy with a few things. For one, for some reason, the texture that you can see in the digital image on the blue background didn’t come through on the file I uploaded to print. I’ve gone back into AD and I can see the texture layer in the layer stack, but it’s no longer visible. I’m not sure why that is. I’m probably going to correct that at some point, because it bugs me. The other problem I see is that the actual art printed dark and isn’t as sharp and crisp as I’d like it. There’s another print company I’ve been contemplating trying out, as they supposedly have better print quality (though I’ve been happy with Print Aura so far for the most part), so I may send these images there so I can make a comparison. If the other company, Printful, works out better, then I can start the process of shifting all my designs there, as they also work with Etsy. From the buyer’s perspective, nothing will change, but it will be a decent amount of work on my end. It’s one of the administrative functions of being an artist that I dislike, and it’s the kind of thing that gets in the way of actually producing work and I suspect those not living this life don’t realize it goes on. The more I think about it, the more I believe being an artist and trying to make a living at it is like being stuck in a state of perpetually trying to start a business. I don’t think there’s ever a period where you’re up and running smoothly, as there’s a constant need to generate new content, manage said content, promote said content, try to get people to pay attention and throw money at said content…

Anywhat, time to move on. Let me know if you’d decorate your torso with one of Lee’s Dragons, and maybe I’ll make them available in the near future. One reason I might is that dragons are an easier thing to market and get hits from searches on, as opposed to, say, Plunger Monkey…because if you aren’t aware of Plunger Monkey, what are the odds you’re typing those words into your search bar? But, lot’s of people search for dragons and dragon related art and merchandise…maybe a few of them are PMD fans in the making…