Hey, look at that. I posted last week and said I would post this week, and here I am doing what I said I was going to do. Time to post the annual summer camp moleskin sketches.

As I mentioned last week, summer camp this year was an emotionally challenging one for me. It is the first year since I became a leader and started attending summer camp that my middle son did not camp. My oldest son has always been more on the extroverted side with plenty of self-confidence when it’s needed. He was the one who wanted to join Cub Scouts, which, being an Eagle scout myself, I was happy about. I remained an unofficial volunteer for his Tiger and Wolf years, but I knew if I wanted my middle son to get involved that I was going to have to step up and be a leader myself. He is much more introverted, struggles with newness and change, and has a fair amount of anxiety about things.

So, I stepped up and became his den leader starting with Tigers. He spent his first week at camp with me the summer between Wolves and Bears (so he was technically a Bear then). His anxieties and resistance to new things were always a hurdle, but over the years I watched him grow and mature and have lots of little successes. It appeared he was coping with and overcoming the things that hindered him, and I know my forcing him to be in scouting helped that. Even after being diagnosed with Type I diabetes in 2017, and subsequently having a successful summer camp experience in 2018, I thought he was still making progress.

This year proved I was not paying attention. Or something. He always stresses out about the swim test, despite being part fish, despite having done the exact same test in all the different waterfronts in all the different camps for the last 7 years. He always gets beginner, because he doesn’t want to jump in over his head (even though that’s not required and I’ve told him that) and because he refuses to take lessons, even from me, about how to improve his technique so as not to gas out halfway through. Last year, his younger brother really wanted to pass the swim test (he has similar issues, though not as bad), so I had my middle son provide some positive reinforcement with the hope that they would both get motivated and pass together.

My youngest son passed. My middle son didn’t. He claimed that didn’t bother him, but I saw his devastation and embarrassment up close.

When it came time for the swim test this year, I could see my middle son’s stress level bump up significantly. His anxieties got the better of him, which lead to a challenging ordeal which was abnormal, even for him. When the situation was over and things were calm, I had a talk with him and asked if he wanted to be at camp, knowing what his answer was going to be. I explained my perspective, I explained the consequences and what it would mean for him to go home, but he chose to go home regardless.

I’m not ashamed to admit I shed many tears. His absence hit me hard the whole week. Even though it was clear he was not in a good frame of mind to be at camp this year, I couldn’t help but think about all the experiences and growth he was missing out on and that he wasn’t sharing with his peers, his brothers, and me. I think the burden of having diabetes and all the potential complications that can come with it, along with his normal anxieties, just became too much to handle. I’m hoping we can help him overcome this.

That was a lot more than I originally set out to write about all that, but clearly I needed to get it out. In the wake of that emotional experience, I wasn’t even in the mood to draw until Tuesday, and even then it was only because of some self-imposed sense of obligation to this tradition that I did. As I should have known, it was somewhat therapeutic. I didn’t draw as much as some previous years, but I’m glad that I was able to do what little I did. 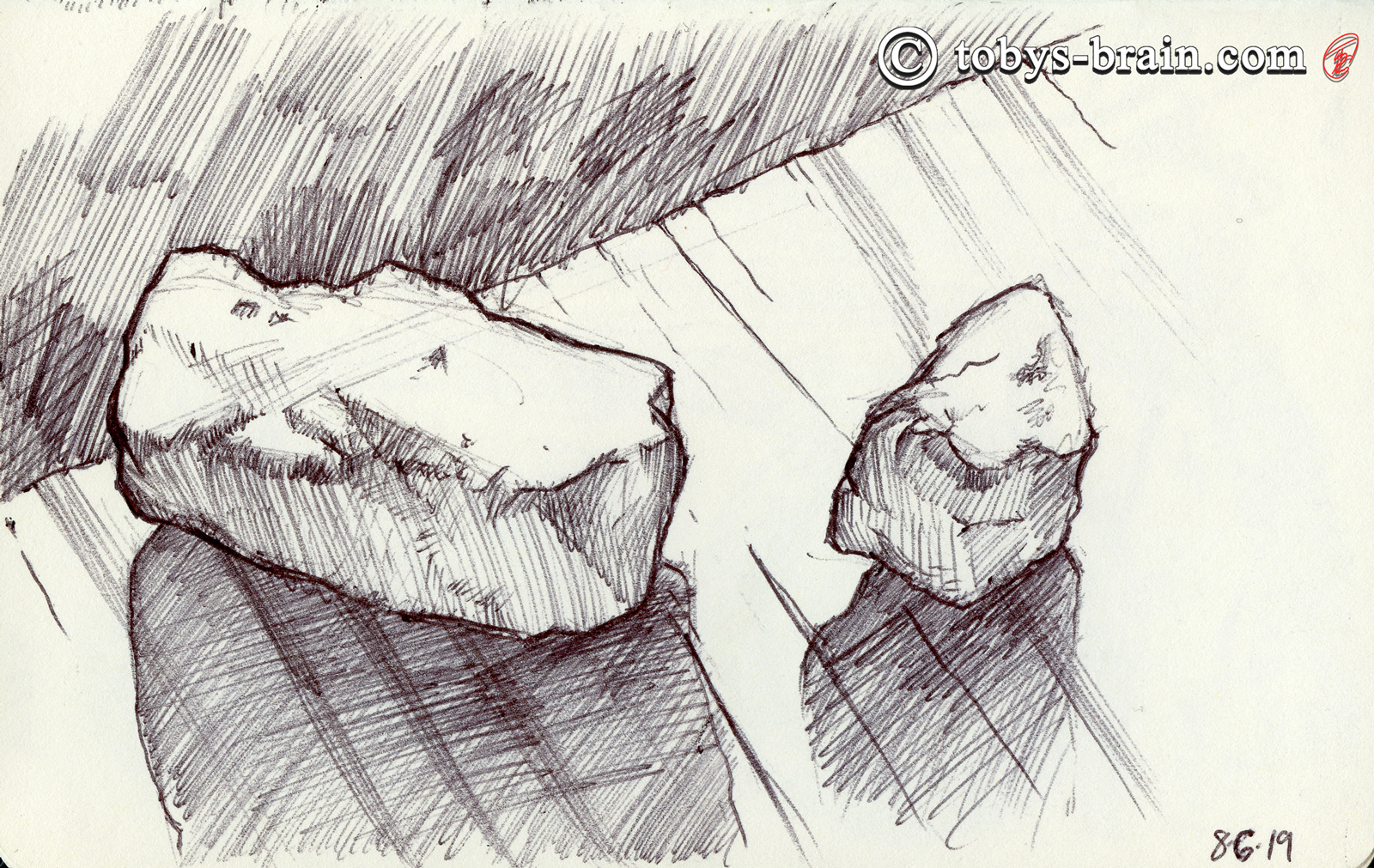 The inaugural moleskin sketch from summer camp, 2019. Just grabbed a few stones and set them on the picnic table just after breakfast on Tuesday. The shadows cast by morning light are fun to work with. 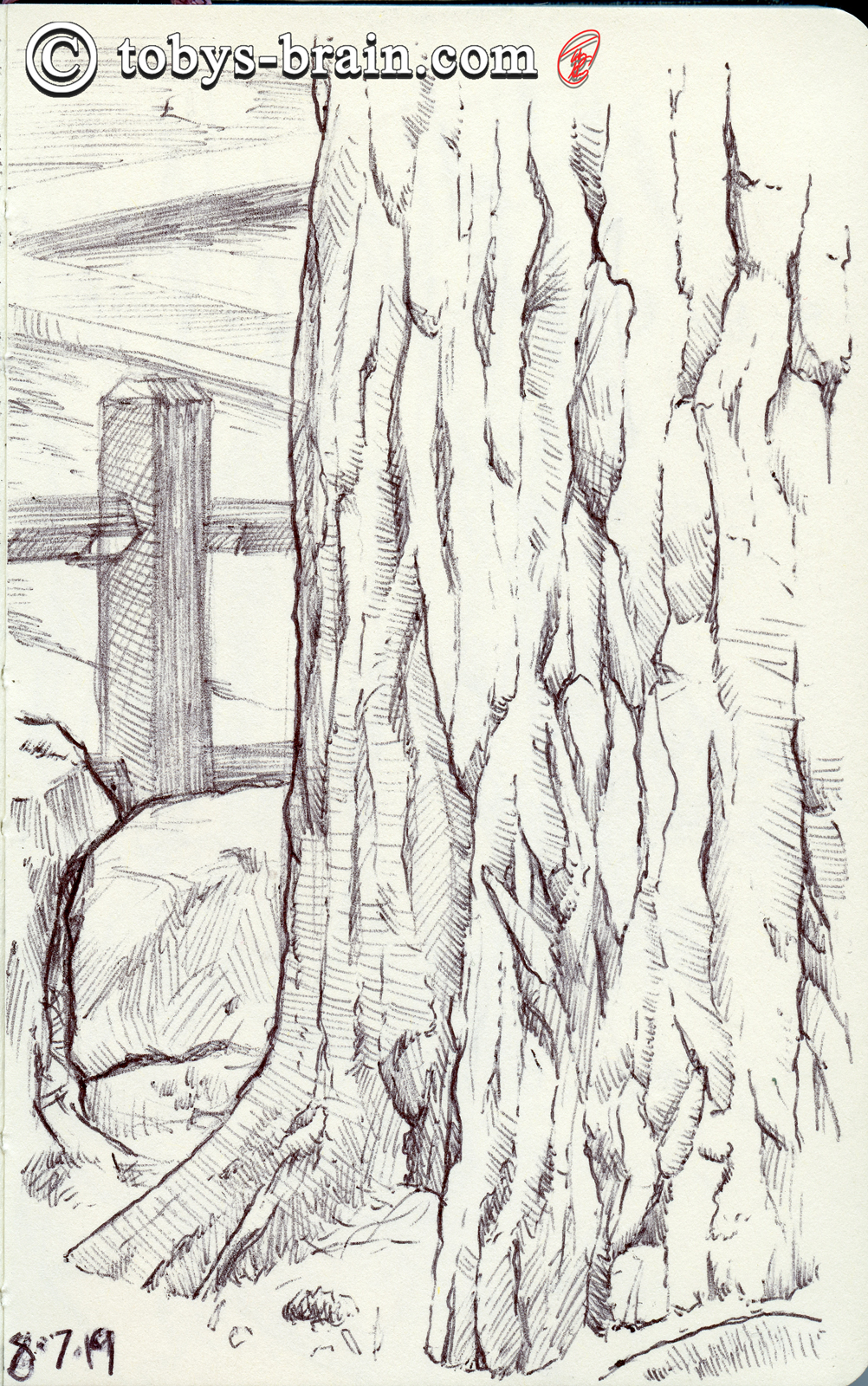 A little scene from the waterfront. That fence and railing show up in a later sketch. 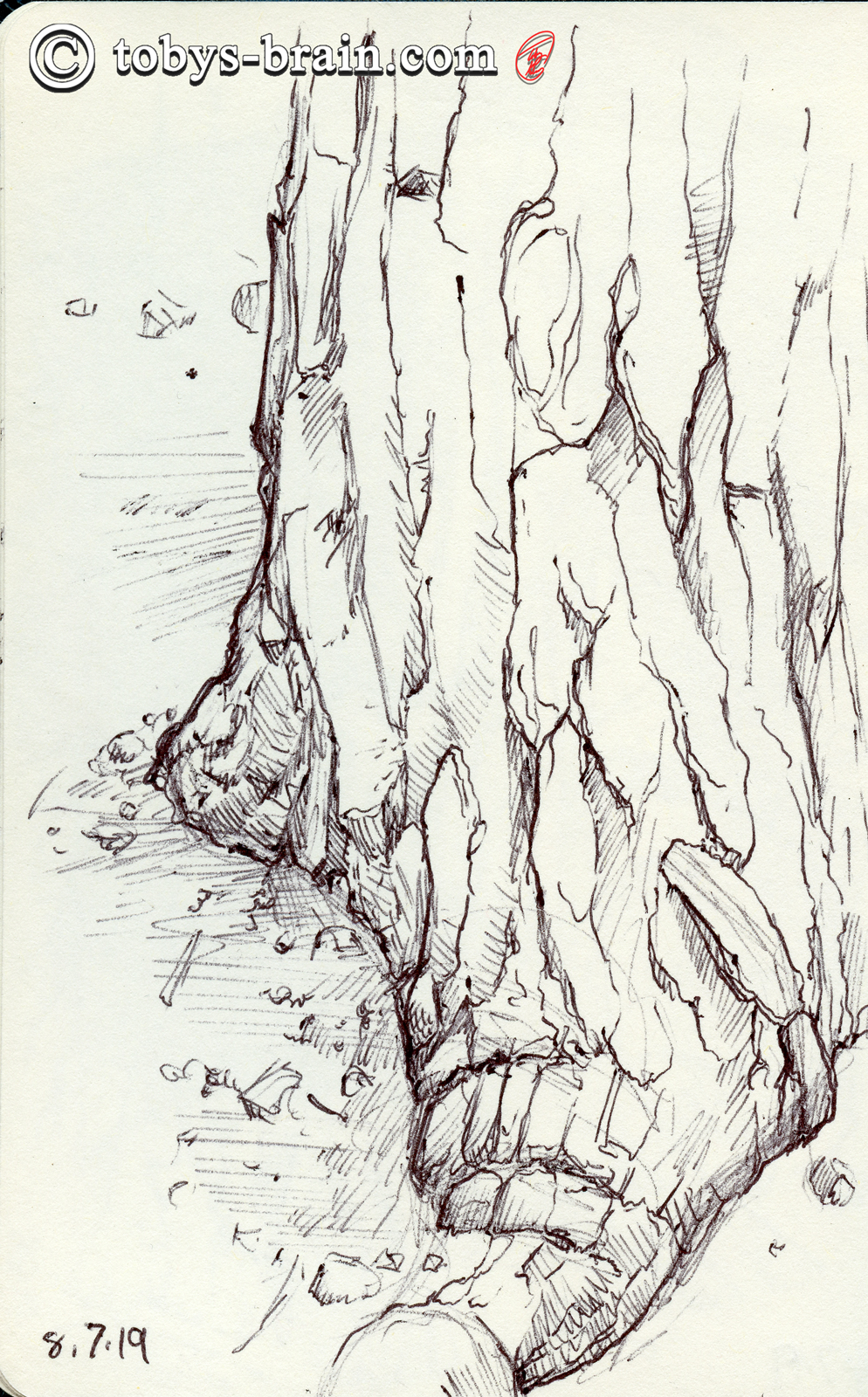 Another waterfront area tree. I love the chunky textures of the bark on these trees, but this one had that interesting root at the front that kind of melted into the ground.

This was a challenging sketch for a few reasons. One is the subject matter itself: a wound in the bark of this tree. There was just so much going on with that cool, plated texture that it was easy to lost my place. There was also a nice colony of mosses and lichens that I didn’t represent well. The big challenge, though, was that I opted to draw this one while standing (it faced a road/high foot traffic area, so it wouldn’t have been great to sit and get comfortable. Standing there was questionable enough). I think I was starting to get the general vibe, if not an accurate representation, but all my joints asked me to stop and move on to something else. 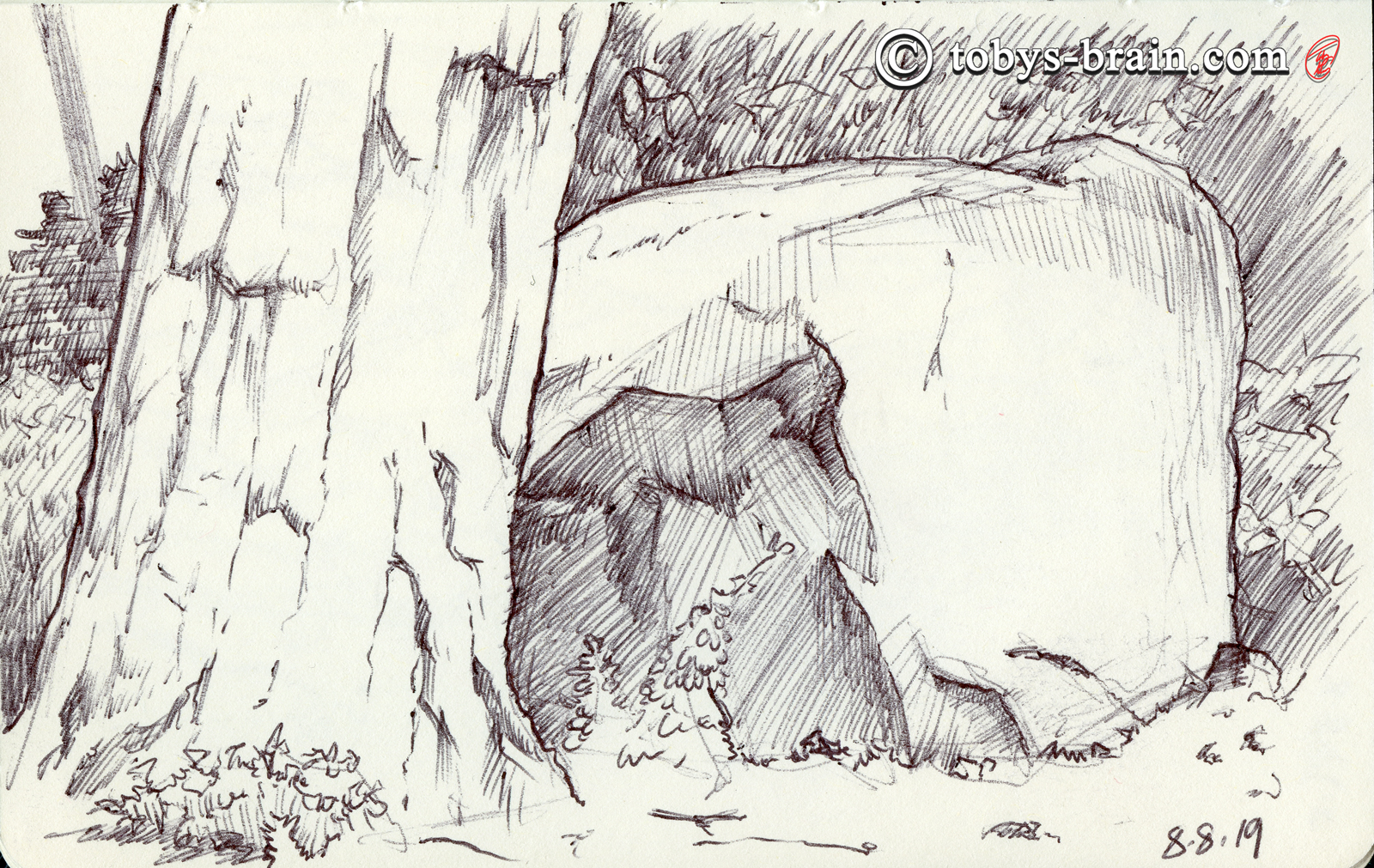 This boulder had some interesting facets that I didn’t do justice to, and there was an interesting juxtaposition of textures between it, the tree, and the greenery in the background. 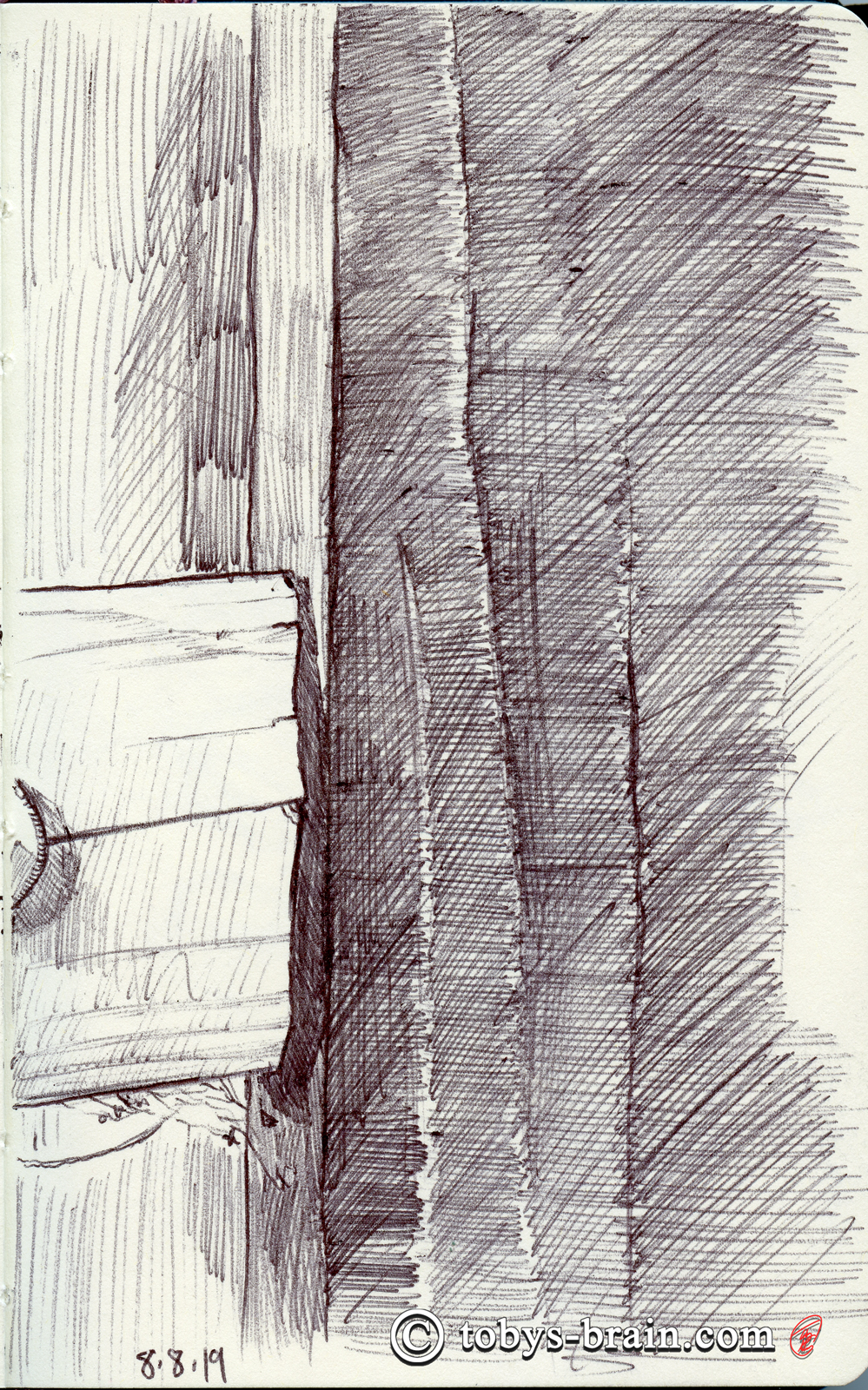 Close up of a fence post and railing at the waterfront. I was originally going to focus more around the washer and bolt protruding from the railing, but I planned my scale and page poorly. This was my first attempt trying to capture cobwebs, though, which are on the underside of the post and rail joint. 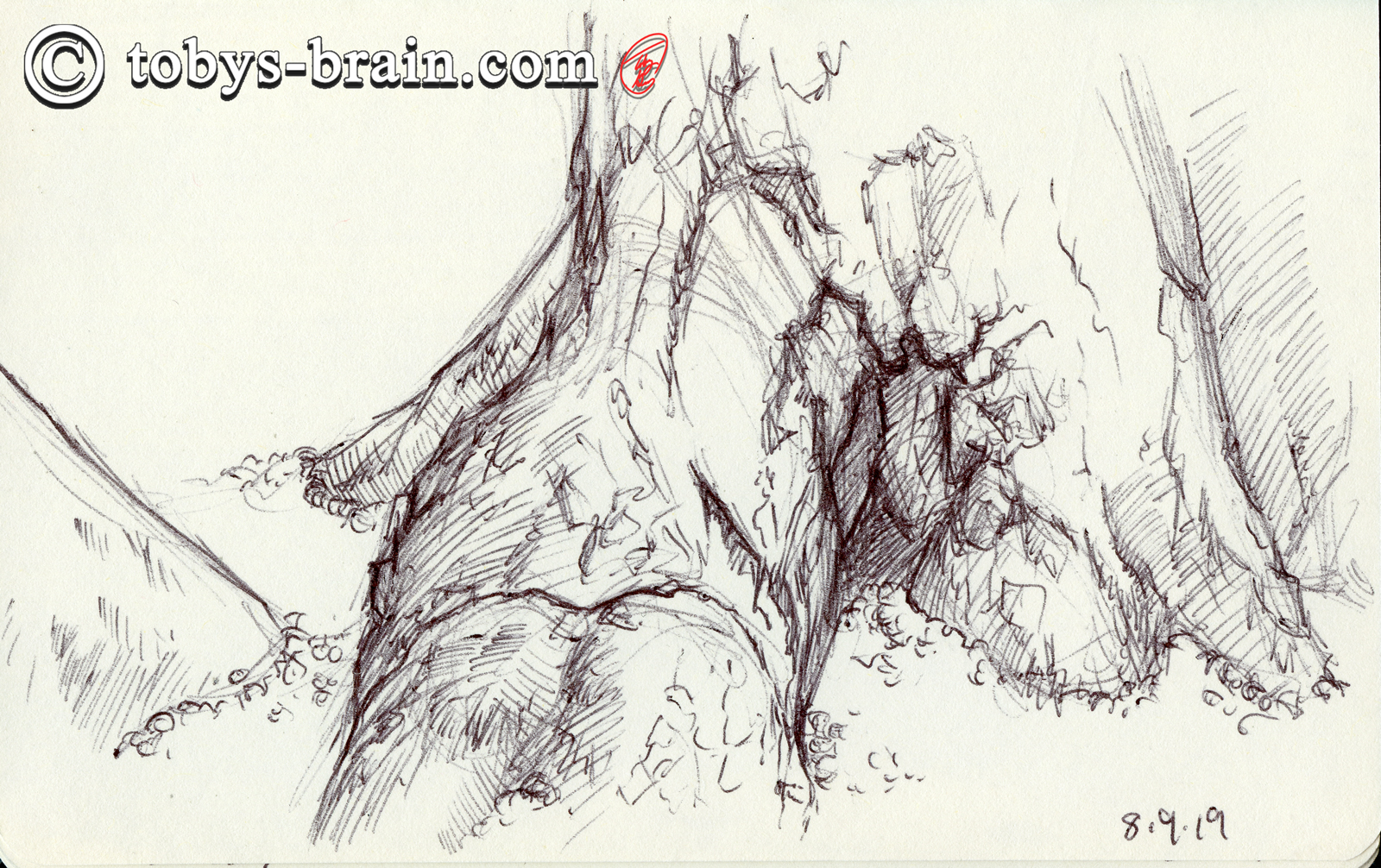 Final sketch of the week from Friday, once again at the waterfront (it was just a nice place to sit). This tree had a nice, chunky root system, surrounded by gravel.

There you have it. Another year of summer camp documented in my moleskin sketchbook. I will forever remember this year for my son that wasn’t there, and hope that next year will be better for him. But I will also remember the positive experiences I had with my two other sons. My oldest is far too quickly approaching 18, which means my years of scouting with him are winding down. My youngest son impressed me a lot this year, stepping out of his shell and showing me aspects of himself that I didn’t think I’d see (aside from actually participating in activities with others, he showed a distinct fearlessness in the water. He has no fear of swimming in water over his head, and even jumped off a 15 foot inflatable iceberg).

School starts up next week. The last few weeks have been, as I have complained in many places, immensely unproductive for me. I’m hoping that changes next week, I’ve almost given up on accomplishing anything between now and then at this point. I still want to make that fourth bag component, but I’m waiting for zippers to arrive. Otherwise, I have that PMD drawing I was messing around with to get used to the Orbweaver to finish, I need to get cranking on the IPMDT panels again, Inside Toby’s Brain is waiting, and hopefully before the end of the year I’ll make some big strides in Revery.

Those are the goals, anyway.