Did you happen to notice? I posted a new IPMDT strip for the first time in, like, a year. Literally. I had said a week or so ago that I was aiming to start working on the strip again this past Monday (which happened to be June 1. Now, I view dates as random in general, but sometimes certain things happen on certain dates and the coincidence makes my Brain happy. First IPMDT panel in a year on the first day of my birthday month. Okay, maybe it only makes sense in my head…). I actually stuck to my word! When I flipped back a page in my sketchbook to see what number panel I was going to be working on (I date and number every panel…cuz muh Brain), I saw that the last panel I drew was 12 days shy of a year ago. Now, those of you who know me in the real world know I have challenges with this thing called “time”. Namely, that it seems to pass and I have no idea that it’s happening. I knew it had been a while since the last panel, I really didn’t think it had been a full year. I’ve been busy, I’ve worked on other things, real life has crept in and side tracked me a number of times. The same old story (or excuses). I intend to be more consistent with the panels, but I’ve said that before.

Anywhat, I did two panels Monday, which wrapped up a new strip for me to post. It’s fraught with problems that I want to fix (what else is new?), but I’m happy that I got something done and I have a new strip to post. Some of the bigger problems I see are in the last panel, and it’s the one I filmed for a time lapse video. I put a little pressure on myself to work quickly, as I had already received a handful of phone calls that day (phone calls are evil), and I was concerned I’d get another one, which would cut out the video. I also wasn’t sure how much space I had on my phone and was worried it might fill up before I was done (I was no where close to maxing out the storage space). So, I didn’t take the time to use a little photo reference or look in the mirror to check my proportions and what not, so I drew myself with these horrible hands and t-rex arms and weird body. Either way, you can watch the video and hear my wonderful commentary (or just watch it on mute) by clicking on the little thumbnaily thingamabob I made: 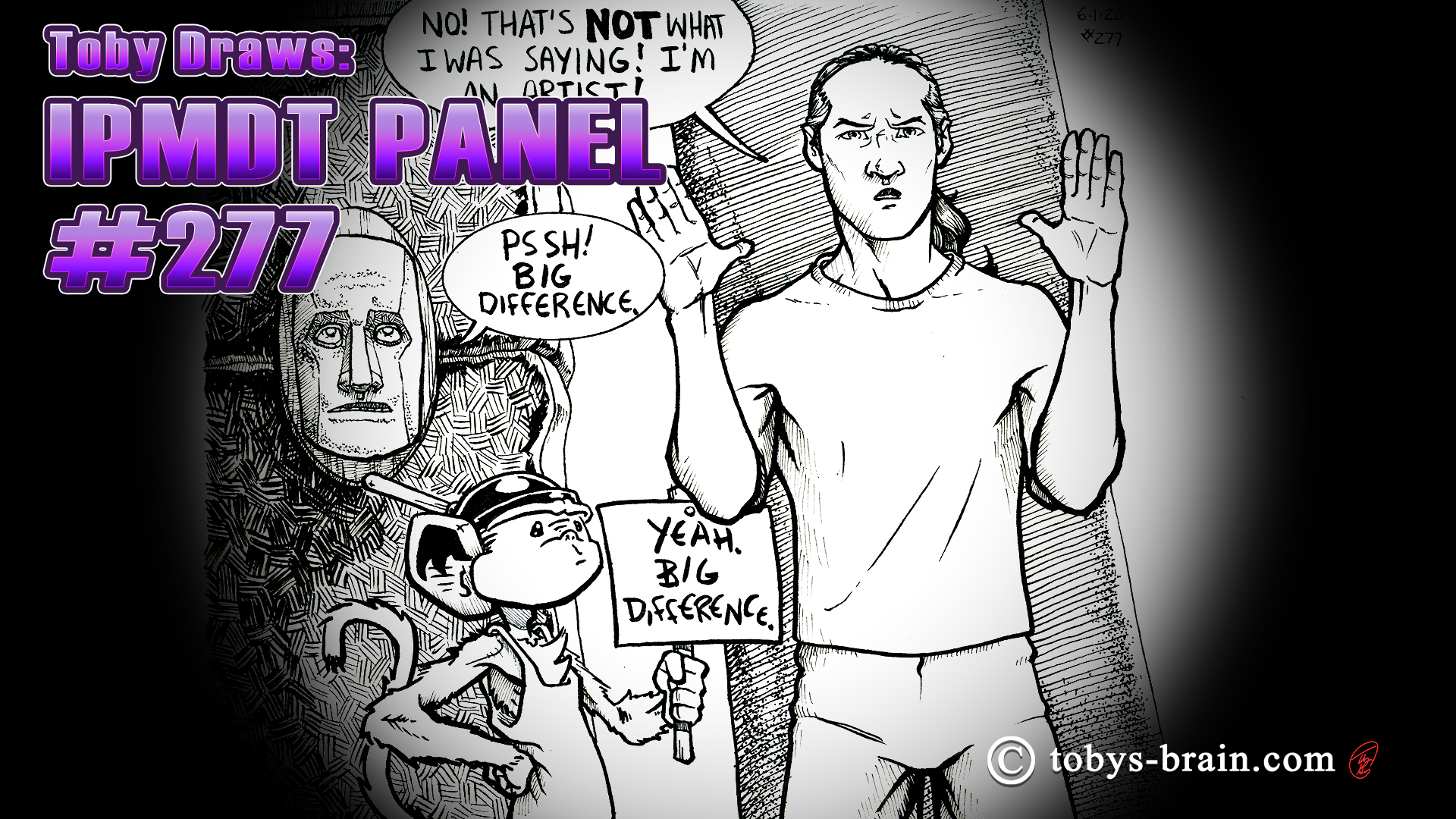 One of the things I am happy with in that particular panel is the way I drew PMD. Granted, he’s simpler to draw, but I spent a few weeks doing turnarounds of myself and PMD so I could get better at drawing us. The PMD ones were by far more fun and I was much happier with them then the ones of myself, but I could have guessed that would be the case before I started. I wanted to get a better understanding of the forms, features, and details of my own face through a range of expressions, and I did the same with PMD.

I’ve done some further facial feature studies of myself, but I’m not posting them yet (though if you want a look at some of them in screen shots, you can see them on the Toby’s Brain FB page or my Instagram account). I’ve been tinkering around with my “style” and trying to decide how I want to have the various comic projects I want to work on look. I love pencil and pencil shading. I love inking and hatching to create grey tones. I love the manga-style halftones and halftone gradients. I love painting in full color, either with acrylics or water color, and getting their respective textures in play. I also love the simpler, animation-style cell-shading. I might be able to combine everything…but I’m not sure. I’ve been messing around in Clip Studio (where I’m already working on Inside Toby’s Brain and am setting up to work on Revery) with making some of my own brushes, but I’m not sure where I’m headed with that yet.

So, what’s on my plate now? Well, I plan to keep working on IPMDT, I’m going to keep mucking around with making my own brushes in CSP, I may do a few more drawing exercises for muh face, I have some concept art plans for Revery (I really need to work out some visual details of some of the characters, creatures, and settings before I start anything else), I want to go through my thumbnails for Revery and tweak the story a bit, add a scene or two…As far as Etsy-related things, I think I may go ahead and make stickers available, despite the challenges I had with a few of them. If I have problems, I can always remove them from my shop. I have a shirt design I took a break from a month or so ago that I need to get back to and finish up, as well as get another design ready if I want to hit my goal of 6 new shirts this year. I know, during a pandemic and civil unrest isn’t the best time to be putting new merchandise out there…but it ain’t like it was selling well before all this. At least it will be dealt with and out there for whenever the world at large is ready for (and aware of) Plunger Monkey and Toby’s Brain.

I hope everyone is staying healthy and safe.