It’s that time of year again, when we collectively pause to appreciate the people that either brought us into this world, raised us, or brought our own children into this world. It’s been a challenging year-which is almost becoming a new cliched thing to say, unfortunately-but while I’m sad to have not been able to spend more time with my family, I am extremely grateful that I didn’t lose anyone close to me to the pandemic (though last year in general was a tough one for losing important people in my life: my grandmother, a close family friend, a young scout, and my first sensei). I think the hardships of 2020 and into 2021 can be an opportunity to shift one’s perspective. It’s almost hard not to stop and take stock of what is actually important, and how we might spend too much time focusing on what isn’t. I think I’ve always had a decent handle on that, I’ve never taken my family for granted. Family is the most important thing to me, and always has been. One thing I struggle with, though, is the passage of time. As far as I feel, I’m still 19. People I haven’t seen in years I feel like I saw just a few days ago. But the separation from my family over the last year, as well as some big changes on the horizon with my own kids in particular, have really served as one of those harsh reminders of the unstoppable march of time.

Anyway, for anyone who doesn’t already know, I kind of have this tradition for Mother’s Day where I draw a card for my wife. You can do a quick “Mother’s Day” search on my site to find all the previous cards and blog posts about them if you’re interested, but there’s a few too many of them at this point for me to take the time to add links here. The first one was 18 years ago, when our oldest was about 8 months old. My wife has a thing for dragons, so I drew a little dragon baby boy (in her arms, the only card I drew with a dragon representation of her). The following year, I decided to draw the dragon boy again, but a little older. The next year, we had another kid, so I added another dragon, and two years after that I had to add another dragon. At first, I would try to come up with interesting or cute things for them to do, holding up Happy Mother’s Day signs, or lying down in the shape of a heart, or wrapped up in the unique blankets she knitted for each of them. I kept aging them to keep pace with my kids, and slowly tried to morph them a bit to be recognizable as each individual kid. I began drawing them doing things that we liked to do as a family, like sitting around a campfire or dressed up in their ski gear. Then I started using specific things we had done over the previous year. I now cull through all the pictures I have from that year and try to find a good one with all three kids that would make a good composition for a card. I never set up such pictures with that thought in mind, I prefer to chose something more candid.

Looking back, it’s interesting to see the evolution not just of my kid dragons, but also my art. It’s always a good thing to be able to look back and see progress when one tends to be very self-critical and never satisfied with one’s current skill level. Being creative can be difficult mentally because it is a huge part of who you are. It’s sort of your identity. But if you aren’t happy with what you are creating, if you never feel like your skills are good enough or you aren’t productive or successful enough, it’s only a short step over into having those feelings about yourself and not just your work. So, going through old art can sometimes be cringe-inducing, but being able to see improvement and progress can help temper some of that mental battle.

Have I babbled long enough? Are you all ready for this year’s card? 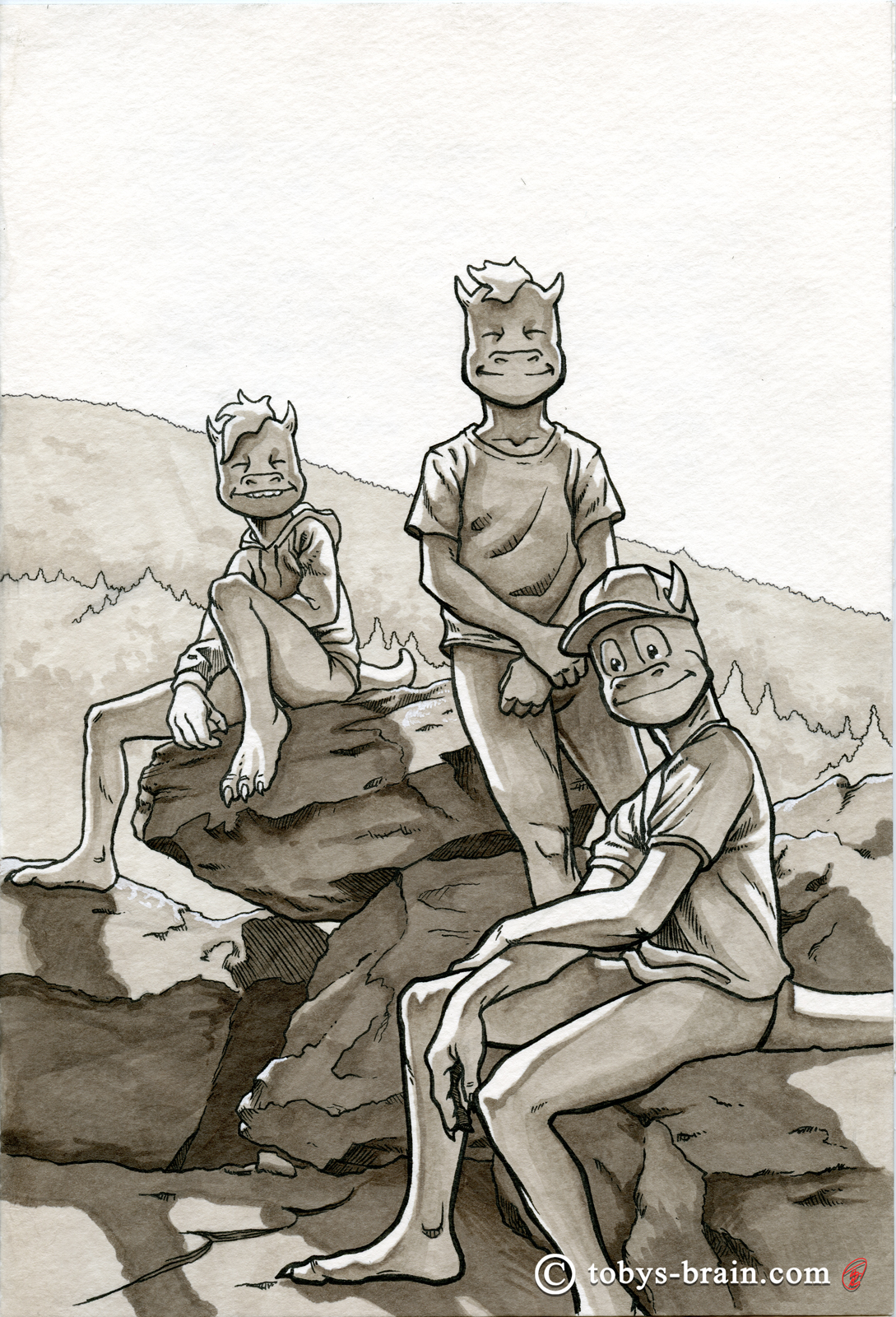 This year’s card was a bit of a challenge compared to previous years. Well, they all have had their challenges, but this one had the extra burden of what setting to use. In more recent years, I’ve been using photos from things we have done and places we’ve been to compose the cards, but we didn’t exactly do much over the previous year because of, you know, a global pandemic. We did take quite a few family walks and isolated local hikes, though. On one of our routes, there’s a giant pile of boulders (assembled by heavy equipment in a logging area) that my wife and youngest started referring to as “The Troll Cairn” (the youngest has loved cairns since he was significantly smaller than the tree he is sprouting into). We happened to go to that spot on one of our walks, and all the boys (and myself and the dog) climbed up on top to sit for a bit. My wife snapped a few pictures, and the lighting was really nice, so it’s what I ended up using for the 2021 card. I think this was the far better choice than the other idea I was mulling over: everyone in masks.
The dragon kids are getting older (as are their human dopplegangers) and a bit lankier/taller. This year in particular it was hard NOT to notice how much taller the younger two have become, which has put me in a nostalgic mood fairly often, wondering where the years have gone, and contemplating what the years ahead will bring. It also raised a question about these cards: do I keep doing them once they start moving out? What will I use for references then? If and when they start having kids, will I include them? Thoughts I never had when I drew the first one 18 years ago.

So there you have it, another year in the books. A very Happy Mother’s Day to all the moms out there, particularly the ones in my life, and especially my mom and my wife. For different reasons, I wouldn’t be who I am and able to do what I do without either one of them, and I have never not been aware of that.