Prior to my wife lovingly strong-arming me into the digital art world, I had been tentatively dipping my toes into those waters for several years. Like many, I had started out by doing traditional graphite or charcoal drawings and then scanning them and trying to color them digitally. This process was clunky for a lot of reasons, but a major road block for me had been trying to do all that Photoshop coloring and whatnot with a mouse rather than a stylus. At one point I tried to incorporate another traditional aspect one of my college professors, illustrator and teacher Bob Selby, had mentioned in order to smooth out that creative process, which was, in his case, to take his drawings and photo copy them several times. He’d then mount the paper to a heavy paper or board to paint on. Because he copied the image several times, he was free to experiment with different painting styles or color schemes. This was really the analogue, less efficient version of what Photoshop and other digital art software can do these days. Anywhat, being that one of my old hang ups (who am I kidding, it’s a current hang up, too) to adding color to drawings was always my fear of losing or screwing up the drawing. I have always been much more comfortable drawing than painting, working in black and white and greyscale than color. I gave this method a try, but with a few digital tweaks. I’d make the traditional drawing, scan and print it, mount the paper, paint it as far as my skills could get me, rescan it and add some special effects, finishing touches, tweaks, and bells and whistles in Photoshop. Quite an involved and burdensome process that took a lot of extra time, a process that with the right tools, I can now do completely digitally in less time and with better results. The only downside for me is that I don’t get as dirty (I like being covered in graphite and paint…don’t judge).

Anywho, back around 2004, after having our first son the prior year and still a year away from our second son, I was trying to spend some time in the studio (which was a challenge as a stay-at-home dad). I took a few older drawings as well as made some newer ones and gave this method a shot. 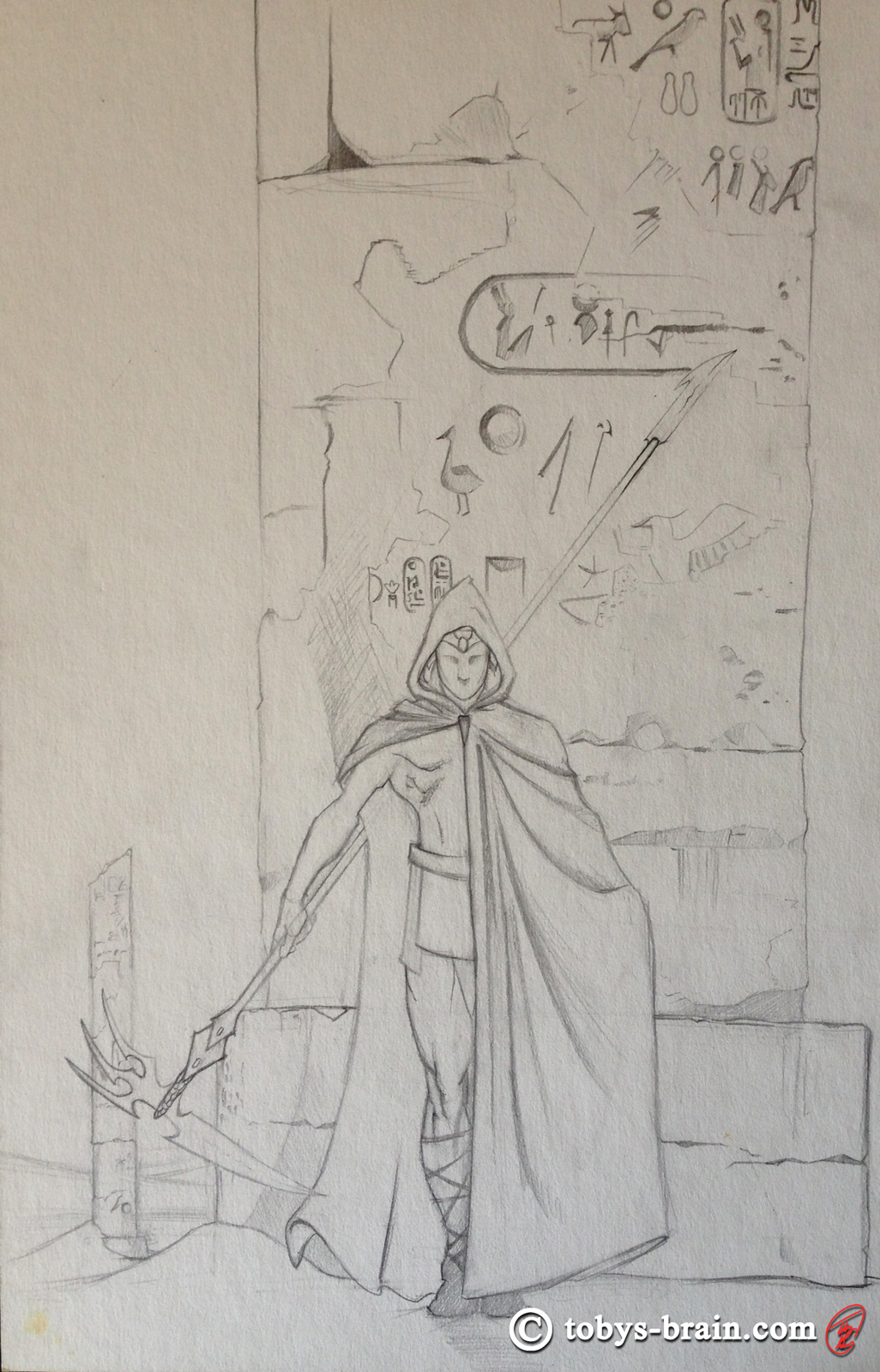 Amazingly, without too much digging, I unearthed the original 9x14ish sketch.

This figure is a potential character from an epic graphic novel idea that has been percolating in the depths of my brain since, I think, 1998. It’s a story that comes to me in dribs and drabs every so often, and it’s always exciting when it does. It’s a post-apocalyptic tale dealing with, among other topics and my world views, the dynamic between trying to solve problems caused by technology with more technology and the natural order of things/evolution. This is the story I have referred to, since it’s creation, as Wilhelm. Why? …well, I needed to call it something when I was talking about it to friends and family without having to give a lengthy synopsis each time. I had recently seen George Carlin’s “Give my love to Wilhelm” bit, thought the name sounded funny, so I used it. Many years later, Carlin made a comment similar to what I just stated about technology, so I feel I made an apt choice in naming the project Wilhelm while it develops.

I even found an unpainted printed scan mounted to some Bristol Board.

Anymonkeys, this character is sort of a manifestation of all the energy of the life that was simultaneously snuffed out in a great catastrophe. I’m not sure if this concept will remain in the final version, but I was trying to figure some things out about what I think life actually might be and what happens when something stops “being alive”. The basic idea was that life is a form of energy. Scientifically, we can sort of say that because we can measure things like the heat and electrical output of something that is living. What happens to that energy when a life ends? I was sort of thinking along the lines of reincarnation, in that the energy winds up in a pool that gets recycled into the next living thing. But, in the story, so much life is extinguished at once that it all comes together in the form of this being. Perhaps that is where the energy for life came from in the first place? This being finds a home, in this case earth, and then part of it’s life cycle is to break apart and feed some inert elements that become alive. Or something. Like I said, I’m still working on the story.

The hand painted image. That’s tape around the edges to keep them clean.

I liked working like this, though it was time consuming. I enjoy painting, even though it kind of stresses me out. Mistakes seem more permanent in paint, even though they aren’t, really. I like pushing the media around and leaving brush strokes, I like mixing colors right on the surface and the way bits of pure color sometimes get left behind, but it does have it’s draw backs for me. Aside from lack of confidence in my painting ability, I always struggled with fine details.  I love little details, but I could never get them “right” in paint. I could never find a brush small enough or get the paint both wet and opaque enough to give me the crisp lines and edges that I was going for. I know it’s possible, because I’ve seen others do it. Maybe I just didn’t have the patience or experience. 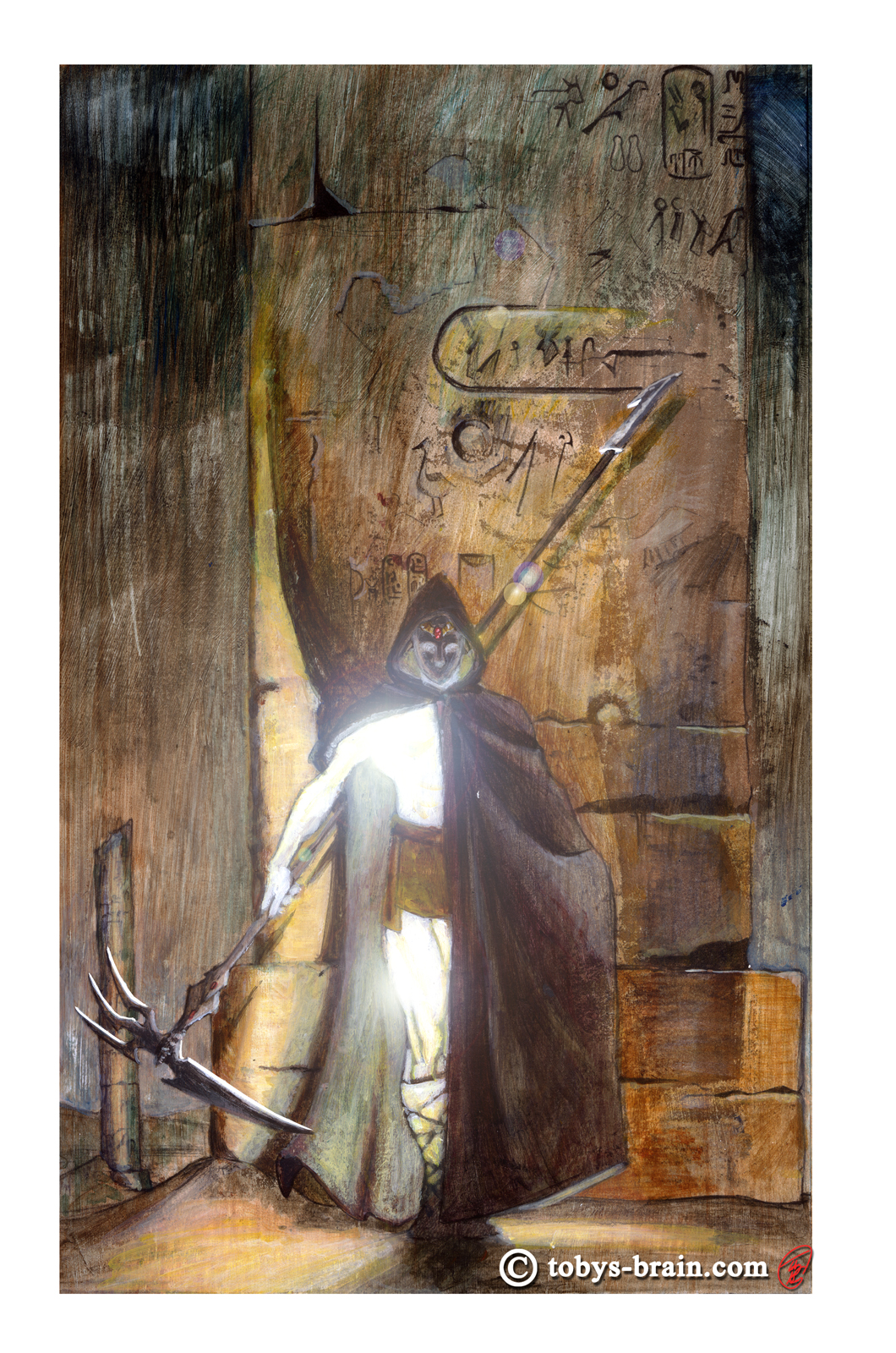 I’m still trying to figure out how to make digital art making work for me. The pros outweigh the cons, and it’s a lot of fun, but I still need to find a way to create some organic textures and brush strokes without doing a generic texture overlay or some kind of generated displacement map. And I have to be able to do it on the fly, without my computer having a stroke every time I try to make a mark, like some of the texture brushes built in to Photoshop. I’ll figure it out at some point.

If you stuck with me for the whole post, thanks for your time! Hopefully you’re not wishing to have it back…