It’s been far too long since I’ve updated, and almost as long since I’ve had consistent studio time. I spent almost all of June plowing through some house renovations (some of which have been on the “to do” list for 11 years, so it was about time anyway) that needed to be done before we hosted my wife’s family for a reunion the first week of July. Between that and scout responsibilities, the studio time sadly gave way first. However, the family have returned to their respective parts of the country, so I’ve been arting again as of this week! It feels good to make some progress again. I know there are some more interruptions heading my way (this will be the last year I have two weeks in a row of summer camp, Cub then Boy Scout, at least), but I plan to make good use of the time I have now. I have dozens of projects and/or ideas still in the works or in my brain, and I intend to start knocking some of them off.

Speaking of finishing up projects, the big news is that I wrapped up edits on 10 Things yesterday! Finally! I started that little project at least two years ago. I’d work on it, then set it aside or get distracted, then come back to it, and repeat. The only thing left to do is write up some kind of history of the One Hen, Two Ducks…thingy, as well as my personal connection to it. Then, I just need to figure out how I’m going to publish it. Prior to all the work I had to do on the house (which got out of control due to a surprise bathroom renovation when the ancient pipes in the shower wall failed), I wanted to have it available before now. Currently I’m going to shoot for before the kids go back to school at the end of August. Cross your fingers.

Anyway, time to continue trying to catch up on some art that has happened over the last few months. Sometime last year, maybe towards the end of last summer (or maybe it was fall, I really have no clue), I started a little concept drawing in the Sketchbook Pro mobile app on my Samsung tablet. It was just a doodle to work on to test out the app and to have something somewhat brainless and fun to work on at nights while I was chilling on the couch. I kept putting it aside for other things, and I frequently got frustrated with my skills, or lack thereof, but I finally decided I needed just to get it done earlier this year. I call him The Blue Eagle Knight. I know, super catchy. The whole idea stemmed from a desire to make cool leather armor costumes for myself and family to wear around at a local Renaissance fair. I’ve seen some pretty amazing pieces crafted by some really talented and skilled artisans, which further inspired some visual ideas. I came up with the concept of a group of warriors that each had a unique animal theme (and in a fantasy story, perhaps related powers or abilities), which was great fodder for armor designs. The Blue Eagle Knight was one of the first ideas, the feather-like armor inspired by some leatherwork I saw on Pinterest or something. The concept needs further refining, but it’s a start. 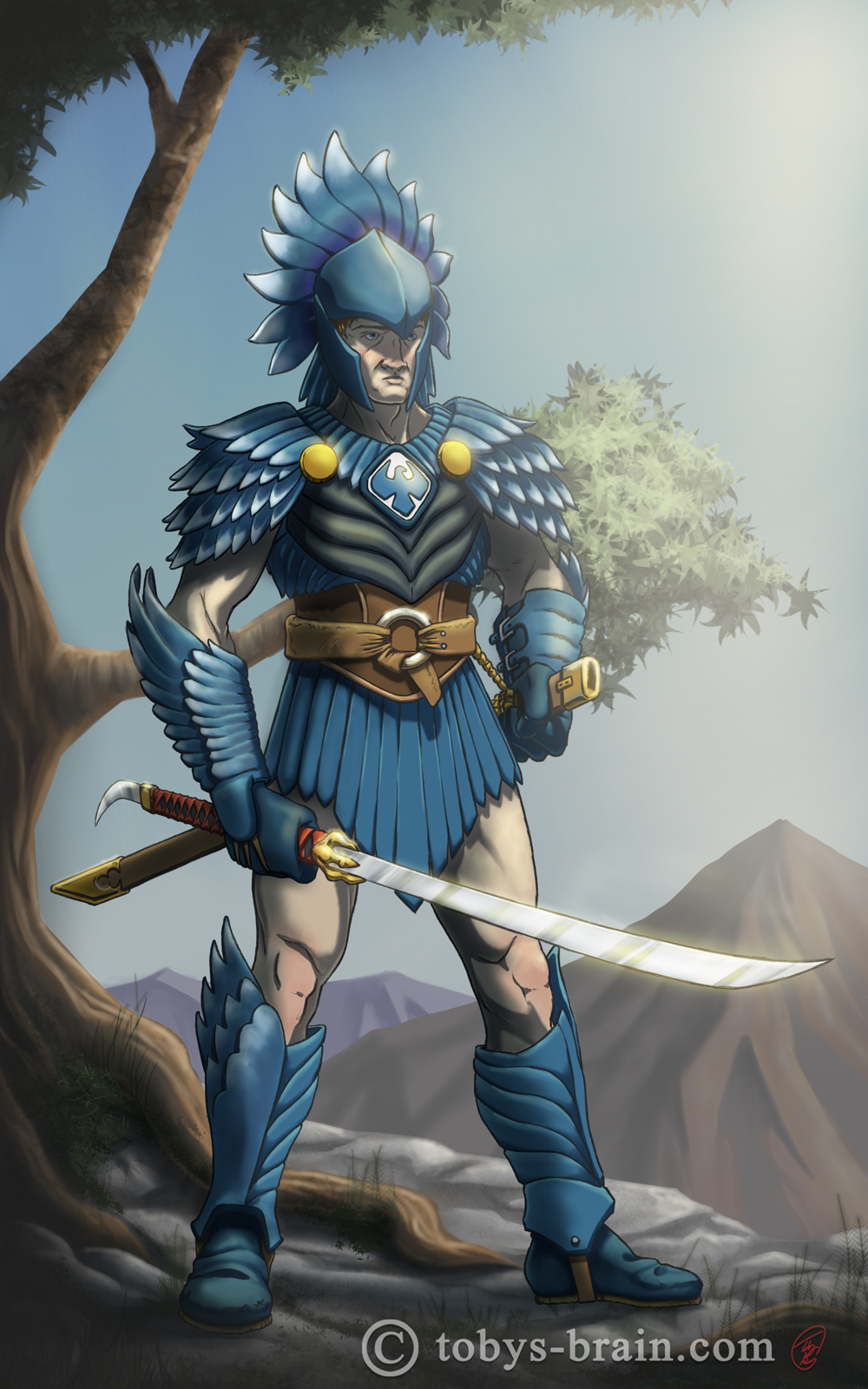 He looks like he’s pouting. Maybe he doesn’t like having his portrait painted? Or maybe he just wants pants.

The Sketchbook app is great for sketching and drawing, but I’m not thrilled with painting in it. It may just require more time (or maybe some future app updates). One of the challenges with the app is the limited number of layers based on canvas size and resolution. If I want to work at the largest size and highest dpi, I’m limited to 6 layers. I have a hard time deleting layers, I always want the option to step back. I’m afraid of screwing something up. So what I ended up having to do was duplicate the file when I wanted more layers, and merging layers that I felt were “done”. It worked okay, but was kind of clunky, it made certain steps more difficult, and it cluttered up my storage space. I know some digital artists work on a single layer. I don’t know if I’ll ever be able to do that, but it’s something I ought to practice.

Just for fun, here’s a breakdown of the layer process (each image more or less was it’s own layer), followed by a GIF. Because I can: 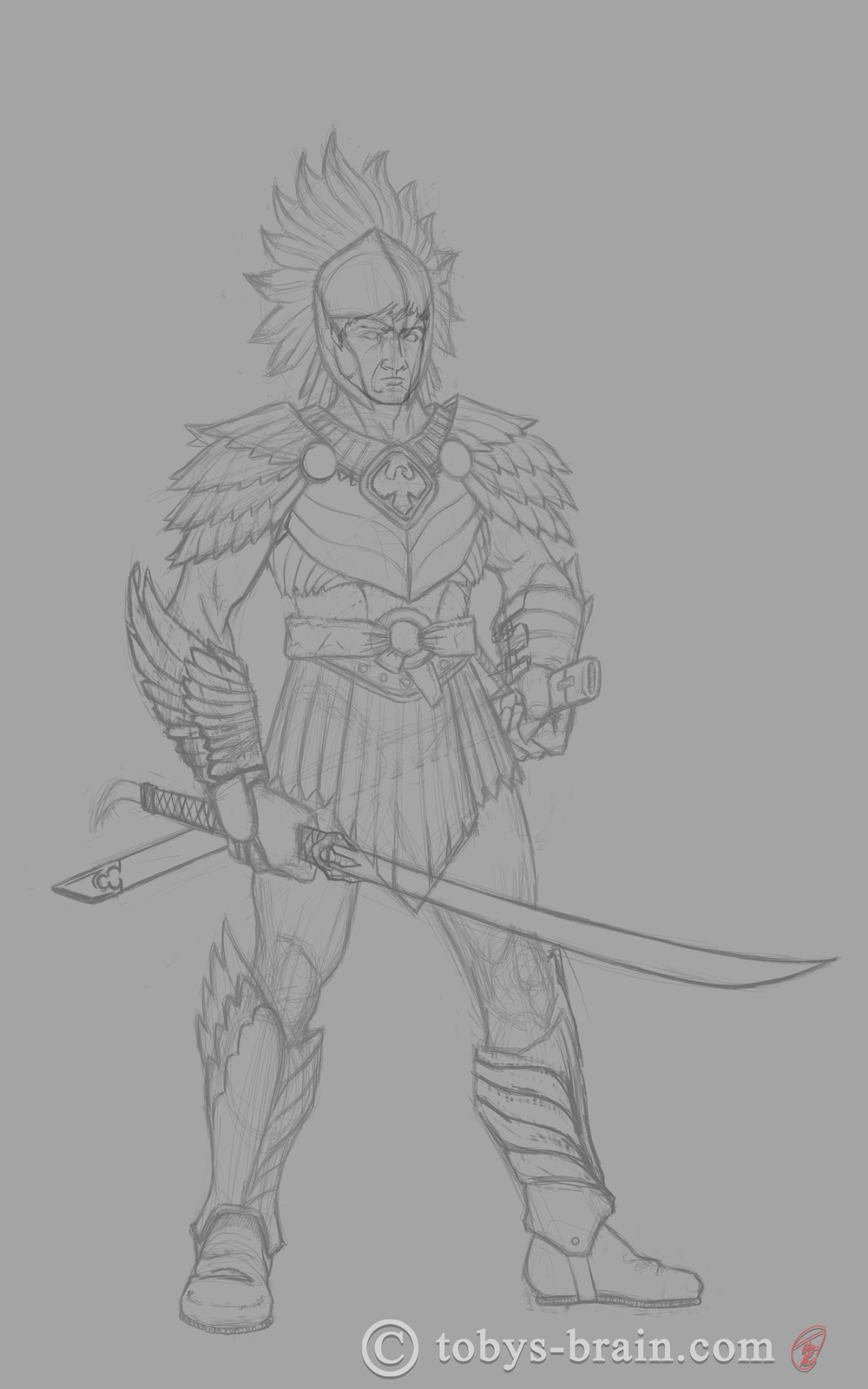 Step 1: the rough sketch on a grey background. 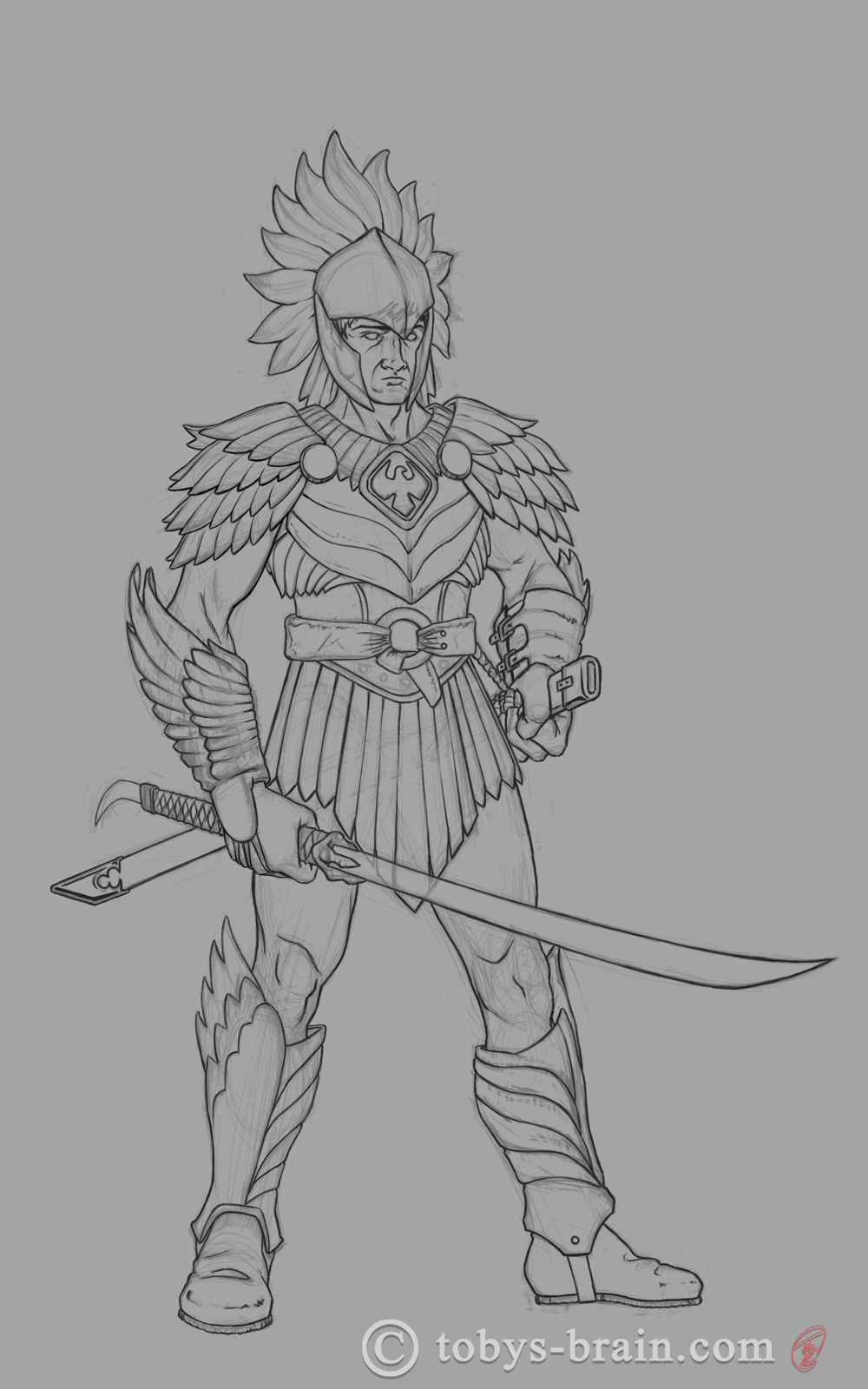 Step 2: tight pencils/inks. I like having a framework within which to paint. It gives me a chance to figure out anatomy and details better (though I didn’t pick up on his sourpuss look until later). 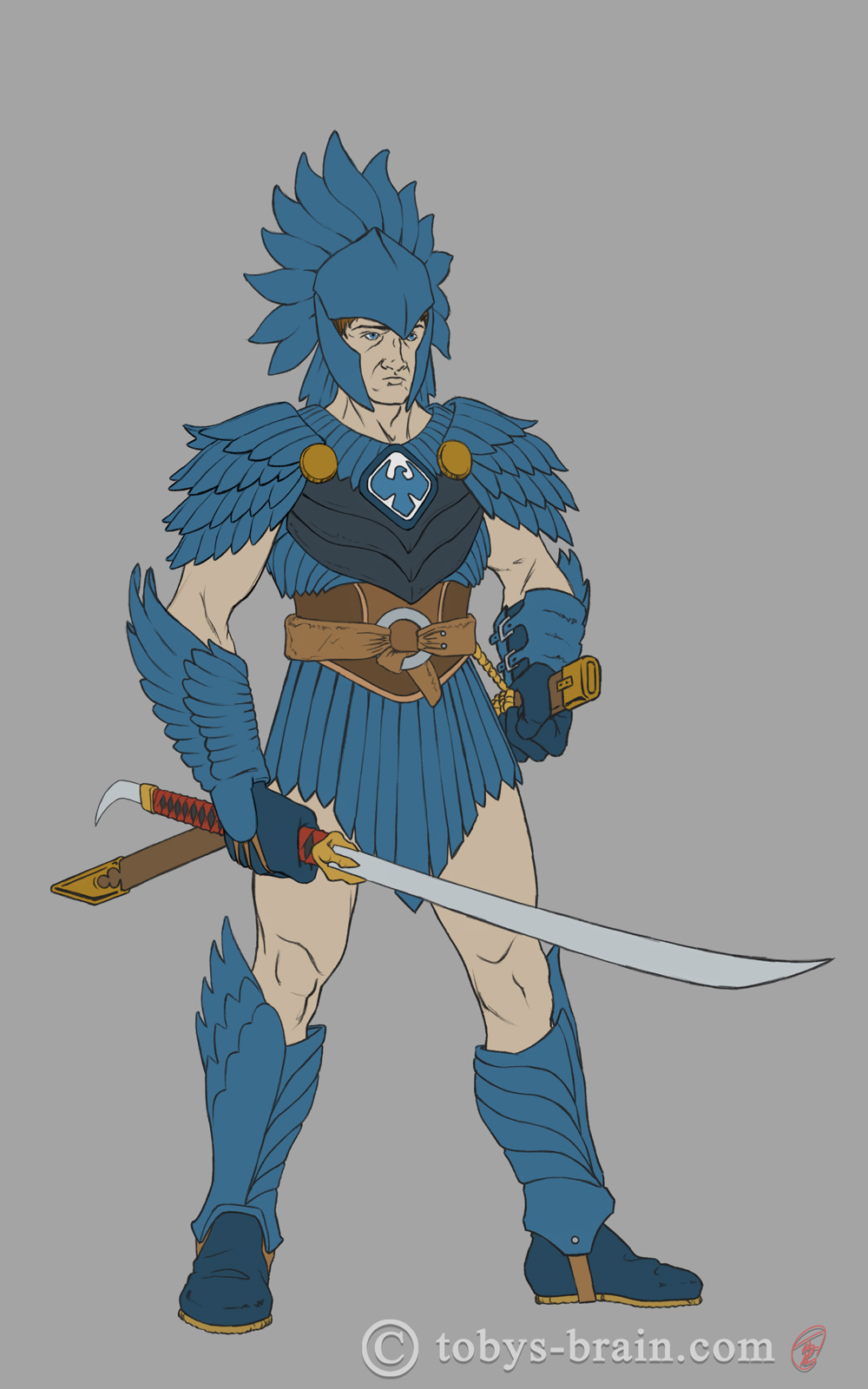 Step 3: flatting, the same process I have been using in Photoshop, though not as smooth to pull off. 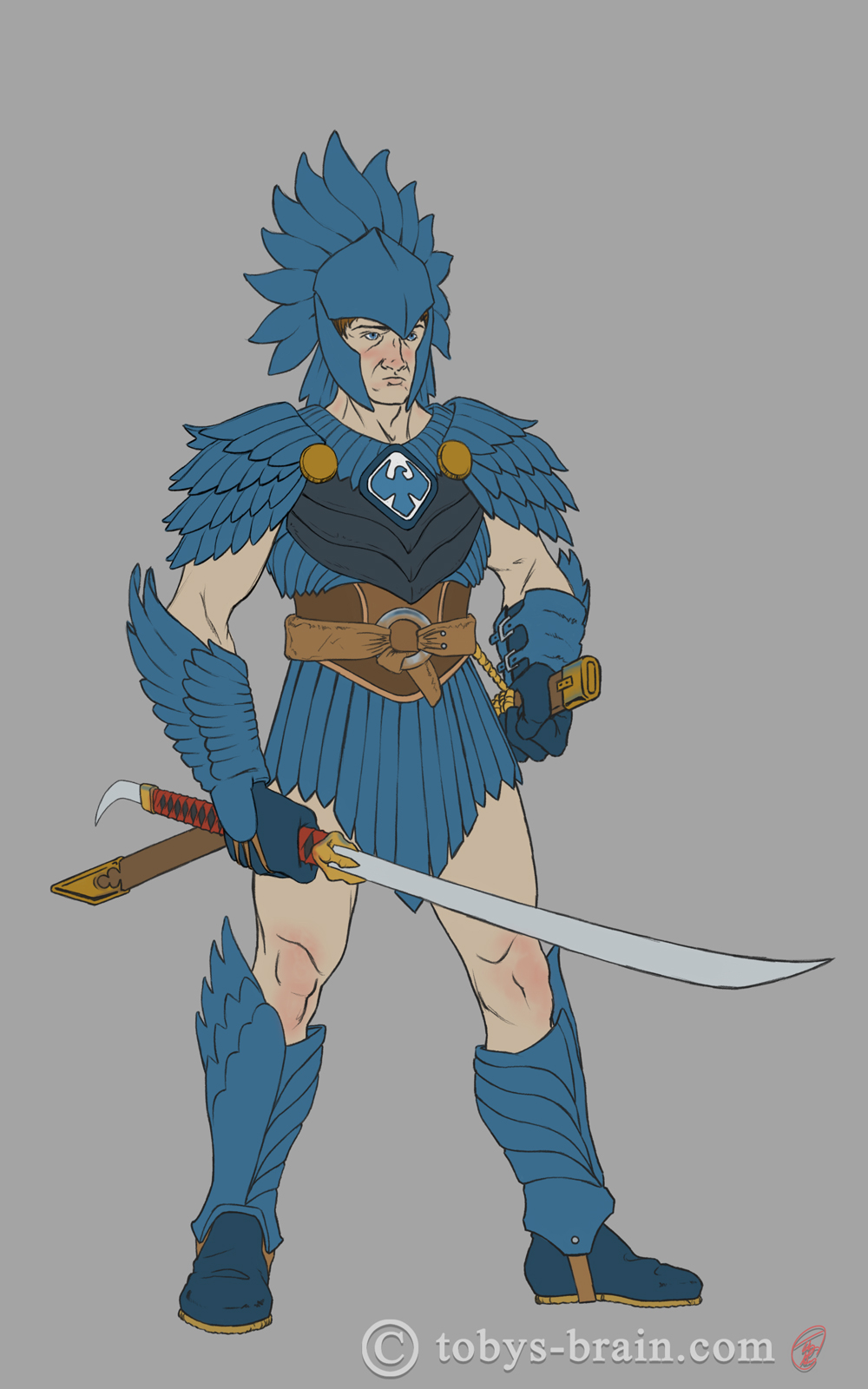 Step 4: just a subtle change on this stage, adding some slight color variations to the skin. 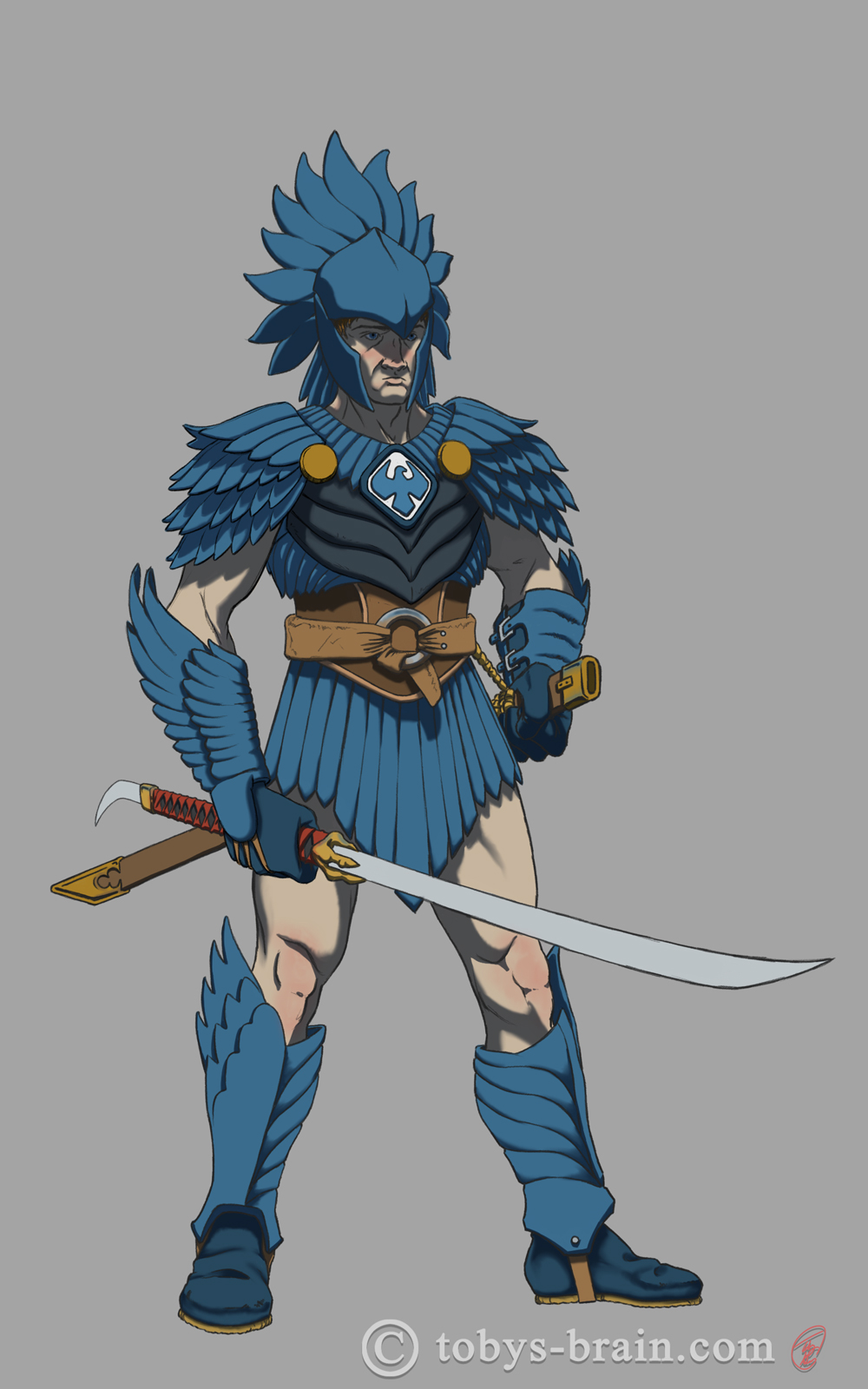 Step 6: new overlay layer for highlights. After this point, I had to start merging layers and creating a new document. 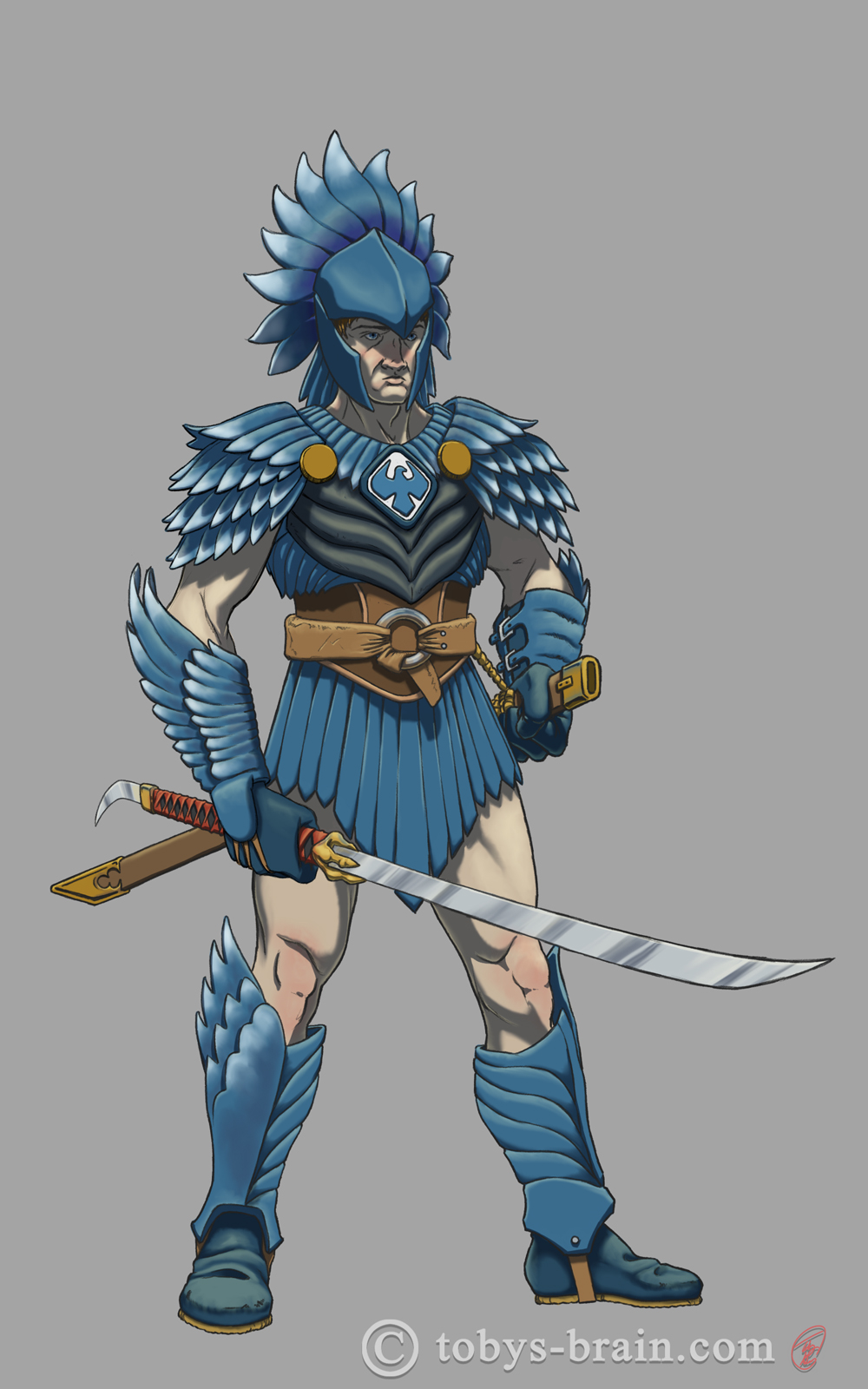 Step 7: added a few more color tweaks to the headdress, the sword, and the feather tips. 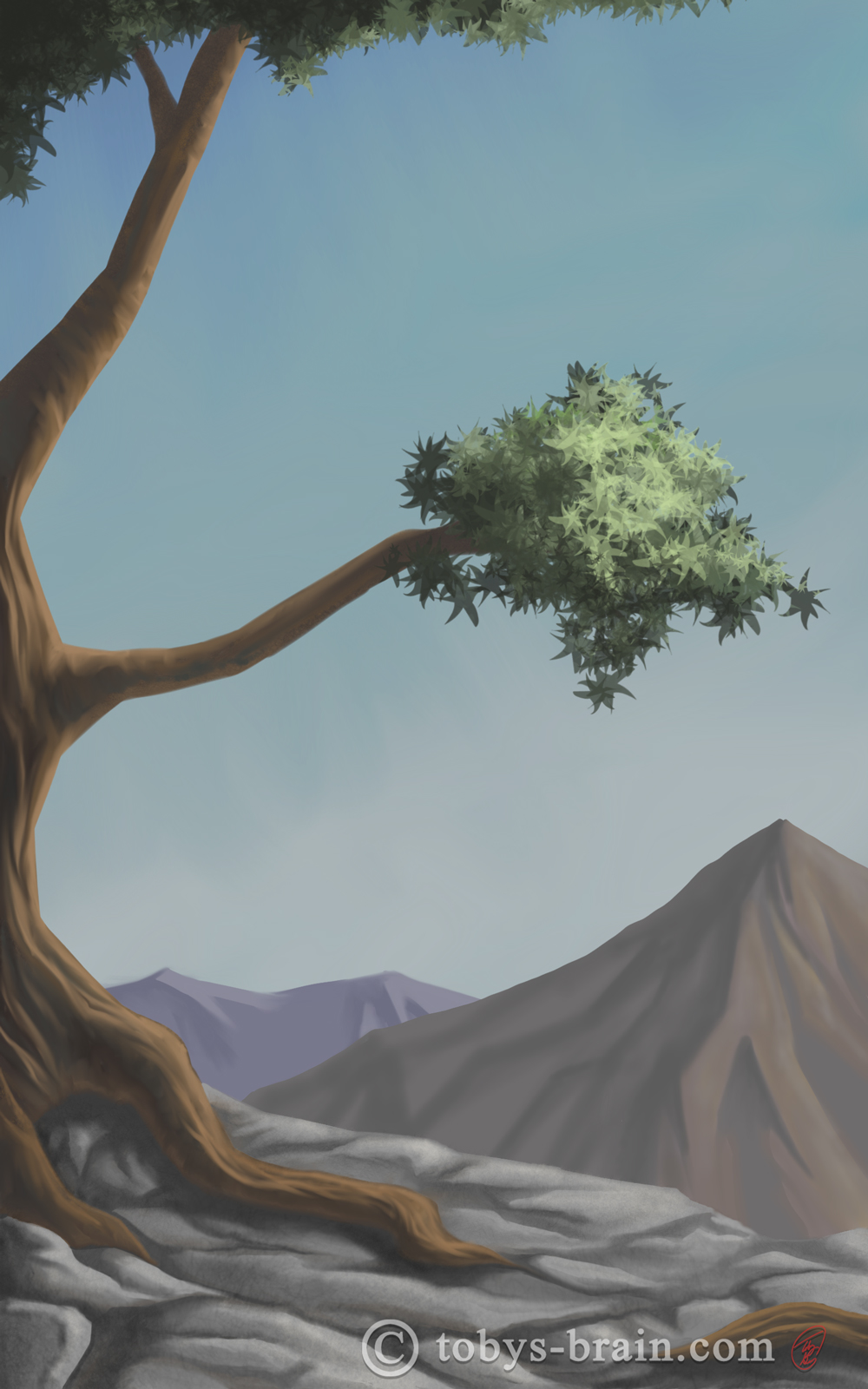 Step 8: turned off the merged figure layer to paint the background. There’s 4 or 5 layers going on here-the sky, the further mountain, the closer mountain, the foreground and the tree, and then the leaves. 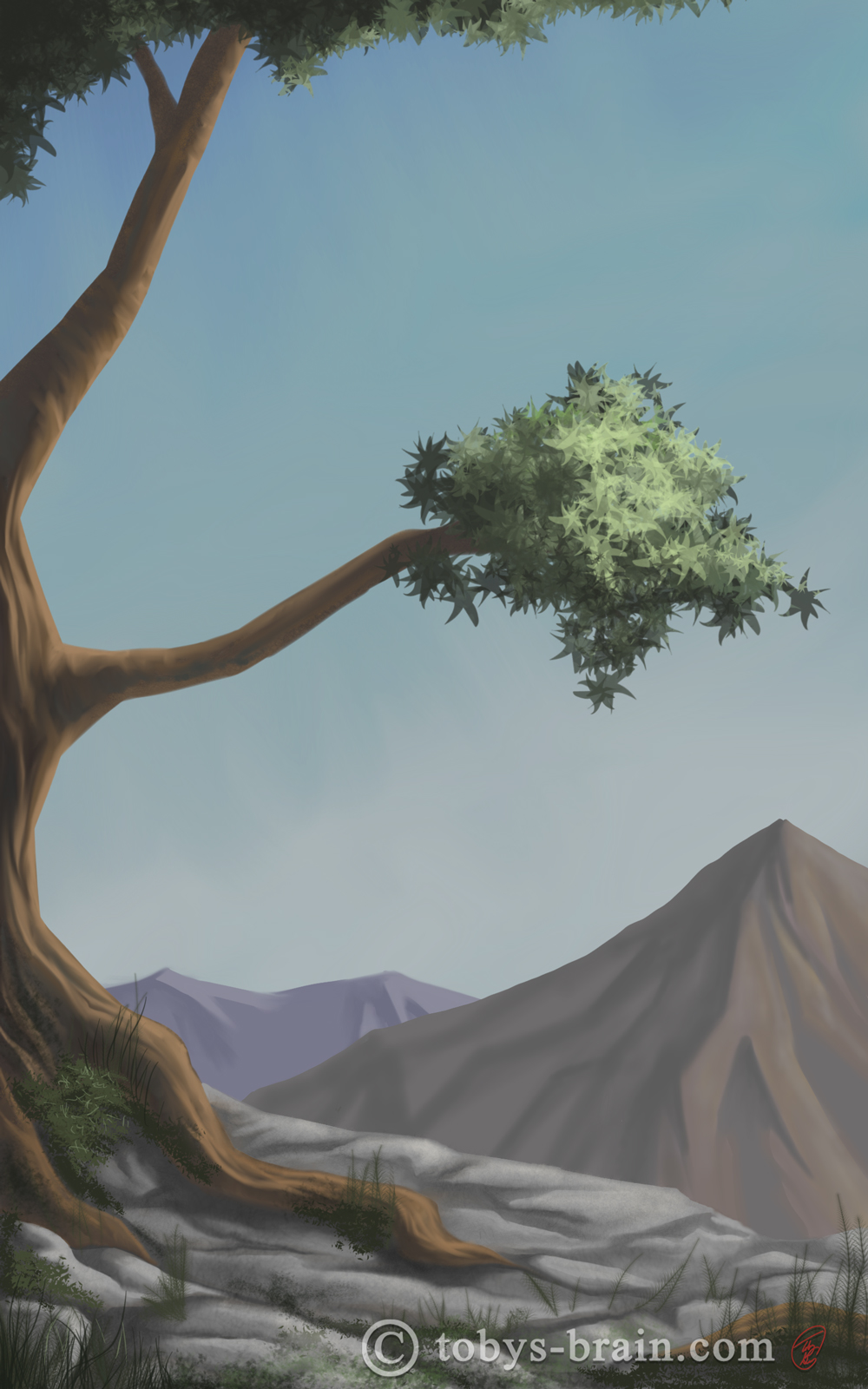 Step 9: merged some of the background elements and added some moss and grass and crud.

Step 10: turned the figure layer back on.

Step 11: added some more shadows to the figure and on the ground, trying (poorly, I think) to make him fit in with his surroundings. 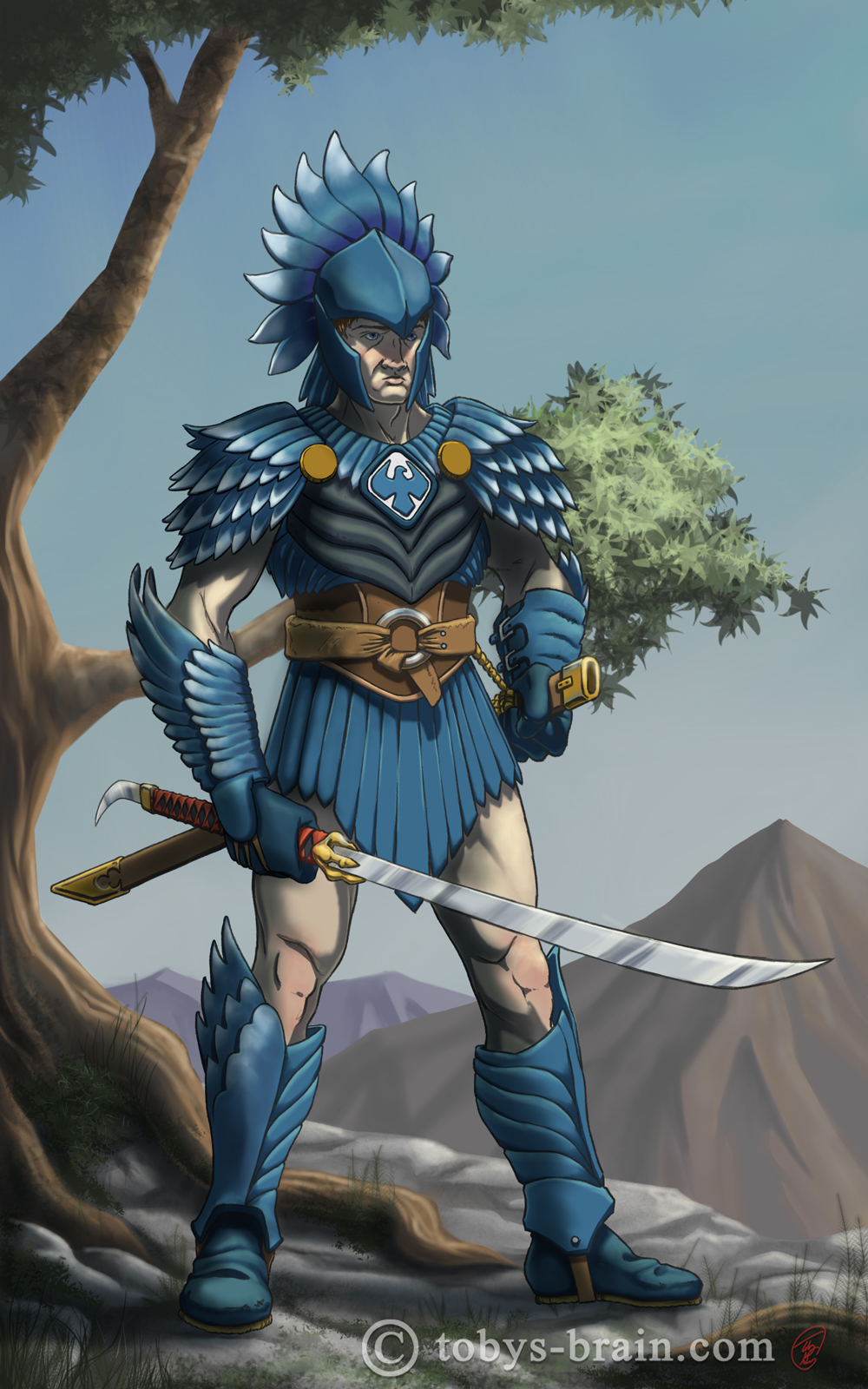 Step 12: I added some very subtle shininess to some of the metal bits. 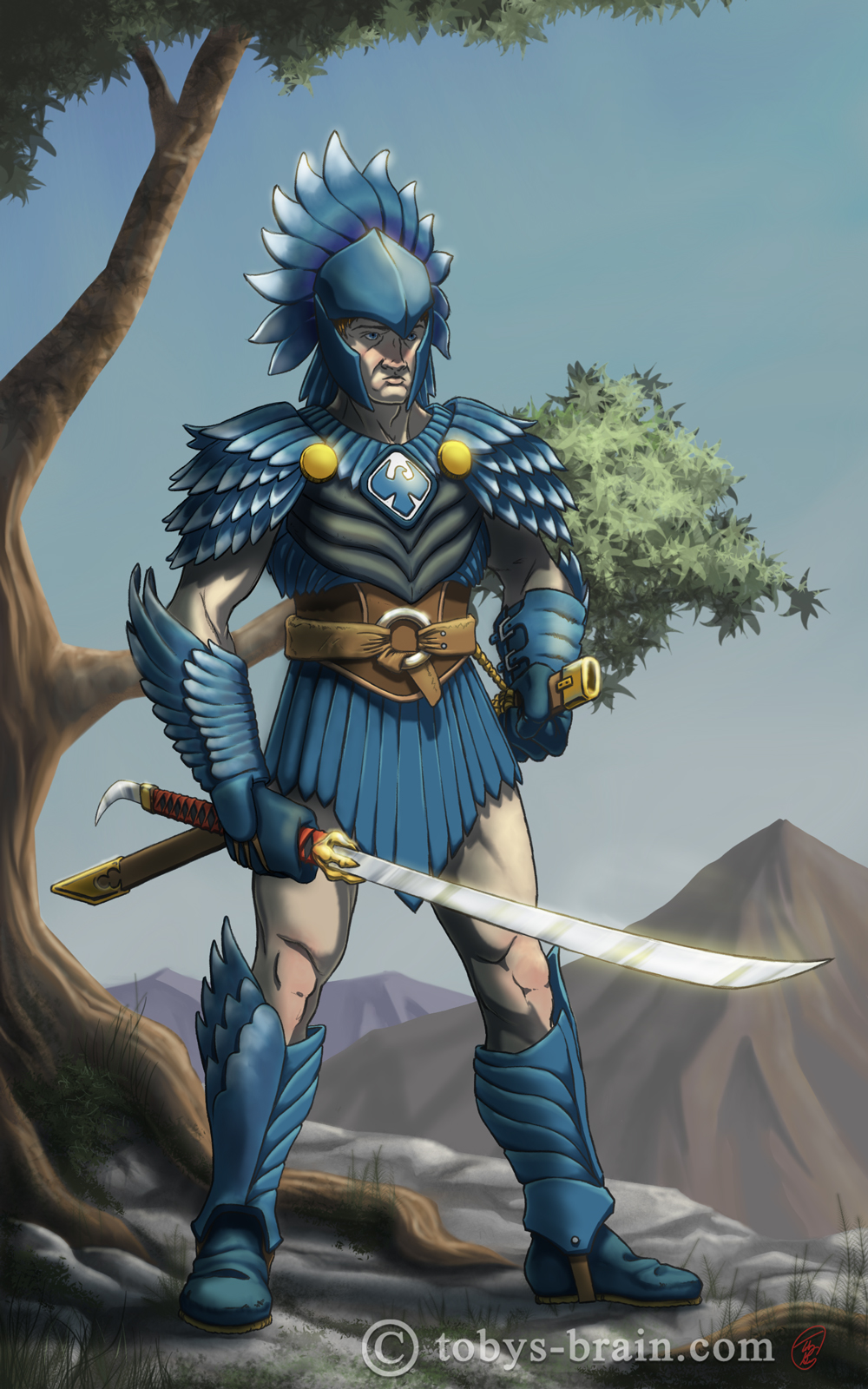 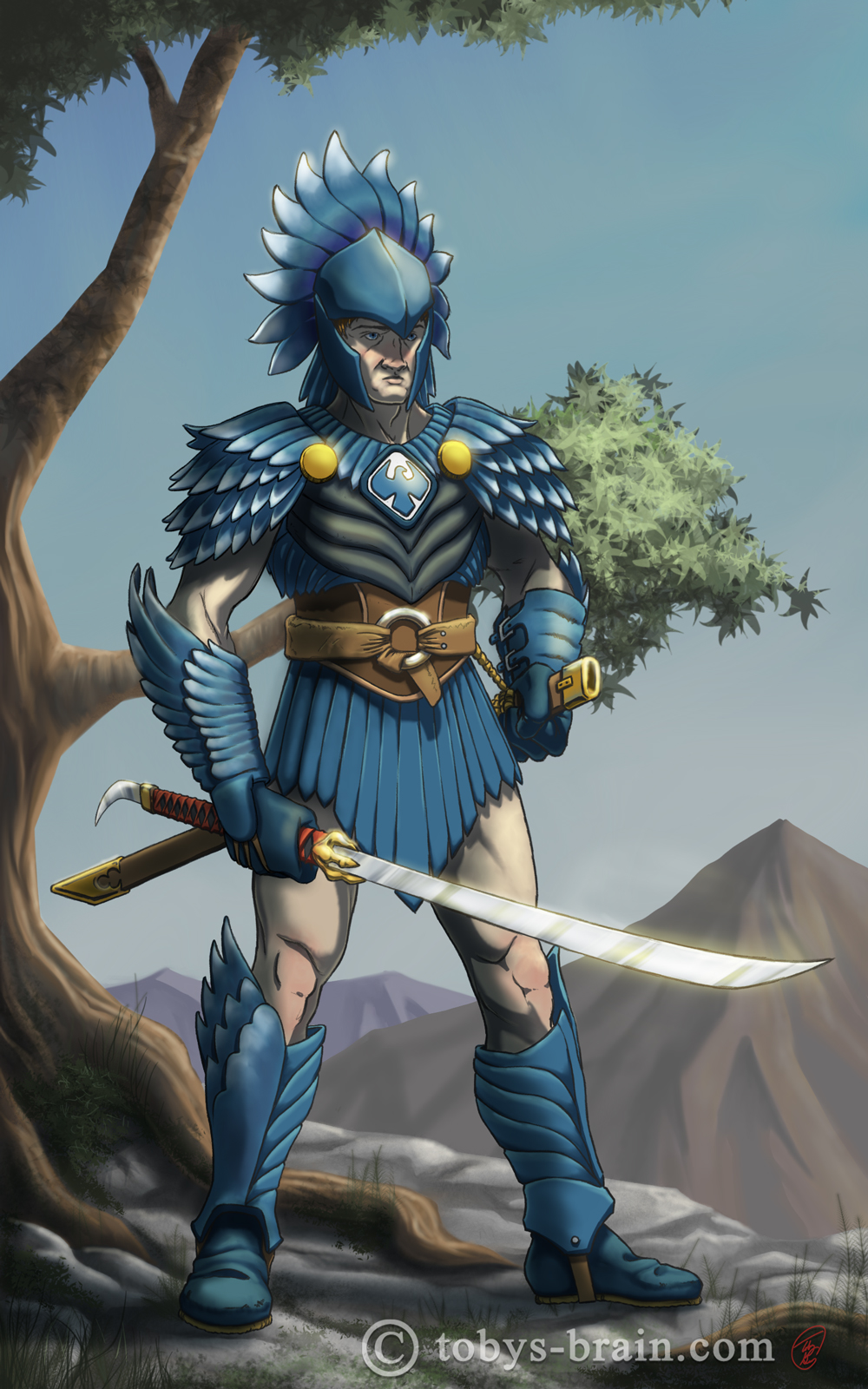 Step 14: …I have no idea what I added here…it’s been several months, give me a break. Wait, did I muck with his face? I think I mooshed his face around a bit to make him a tad less grumpy.

Step 15: I added a low opacity shadow on the lower left corner and a low opacity glow in the upper right. They might be a bit much, but they’re there.

I’m sure I can streamline the whole process, given more time.

There you have it. Don’t have seizure watching the GIF, it’s not worth it. With 10 Things wrapped up other than the writing, I’m hoping to focus on IPMDT and the other new comic thing I started called Inside Toby’s Brain, as well as turning some attention back to that whole t-shirt thing (and the short comic collaboration with the wife, and…). The trick is going to be choosing things to work on and sticking to them, rather than getting paralyzed by all the different potential projects and not knowing which one or where to start.

Hopefully I’ll get a few posts in a row before I’m off to camp with the kids, too.