Hello! I’m back from my two weeks in the woods wrangling Cub and Boy Scouts! It was a great experience (and with the week at Cub Scout camp being my fifth and final, it was a bit emotional), but very draining. I’m still trying to get back into the swing of things and remember what the heck I was doing before I left. In the meantime, I thought it best to catch up on some posting while my brain sorts itself out.

Waaaaaaaay back at the end of June, my youngest son finished out his last days in our little elementary school. It was a bittersweet moment for me. On the one hand, next year, I’ll only have one bus stop to deal with, one wake up time. This should get me into the studio earlier and help me be more productive. On the other hand, I really enjoyed that little school, the people that worked there, and the sense of community. It’s also a slap in the face signal that my boys are growing up, and I’m not sure how ready I am for that.

When my oldest son ended is elementary career, the yearbook staff sent out requests for “shout outs”, little words of encouragement or congratulations to be included within the pages of the yearbook. Me being me, and my brain being my brain, I immediately asked if I could do a little illustration instead. Someone greenlit me, and thus a small tradition was born. 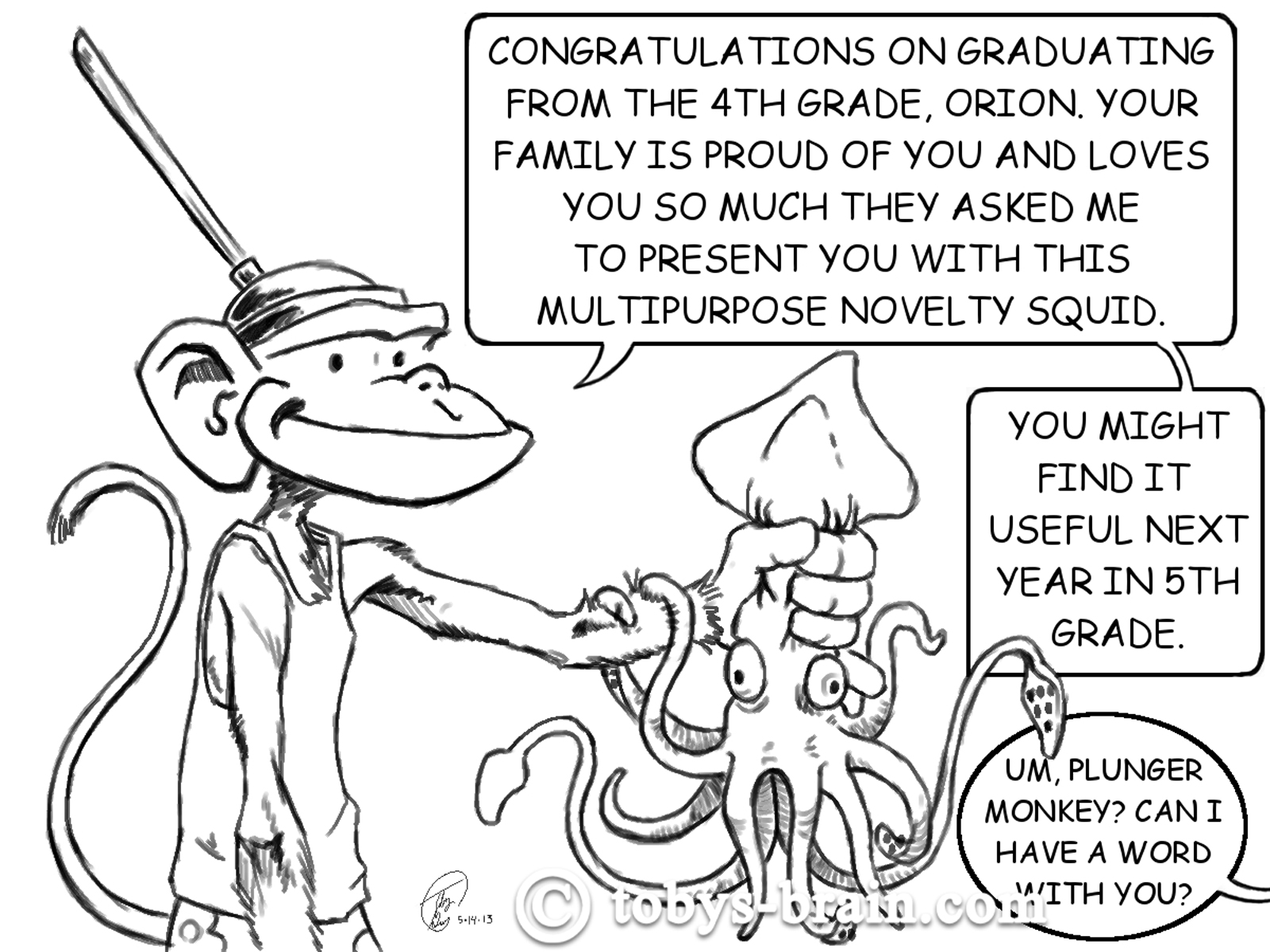 This illustration was pretty early on in my “getting back into the studio” days, which means it was pretty early on for my working digitally. It’s also a very dated looking PMD, back when I thought he might actually have a voice and speak like peoples! He used to have that elongated muzzle, not sure why I used to draw him like that, as it’s more baboon than generic “monkey”. He also had a serious underbite. 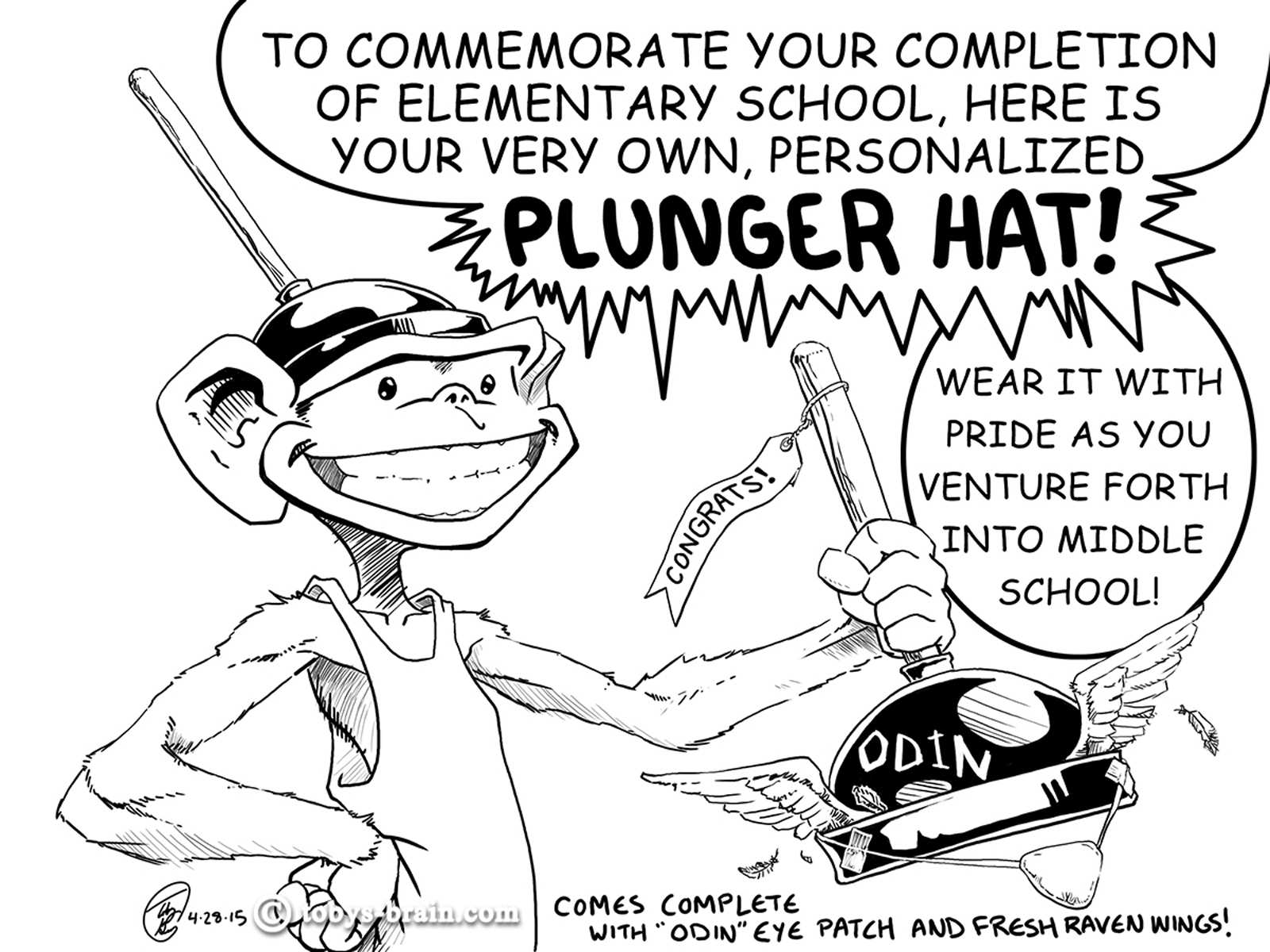 Two years later, my middle son wrapped up his elementary school days, so it was time for another personalized PMD illustration. My style and skill with the tablet was obviously much more refined, and Plunger Monkey is starting to look more like himself. I still wasn’t certain how he would communicate, but I was not far from coming up with the notion of his using signs. Notice that the word balloons lack “tails” to indicate that it’s him talking (it’s actually me, but off camera).

Finally, my youngest son walked out of elementary school for the last time this year (2017). This is by far my favorite shout out, it’s the most polished and “professional” in my opinion. I had learned quite a few more tricks and gained some new skills by the time I set stylus to tablet on this one. I even made use of my speedline and halftone brushes. The purple cat reference is because my youngest has always been infatuated with both cats and the color purple, and he has talked about purple cats for years.

So, there you have it, an unintended snapshot of the evolution of everyone’s favorite plunger-wearing monkey. These images will always be special to me for the time of my life they represent and the memories that go along with them.

Now that some of the busier parts of the summer are behind me, I’m hoping to ramp up my productivity levels again. I just need to figure out what I left off doing, and figure out where I’m going. I have a special project that I was pretty much done with before camp, I just need to deal with some finishing touches and “the next step”. 10 Things just needs the biographical page formatted, then I need to do some research to figure out how best to get it out to the public. I really want to get my personal t-shirt shop up and running before year’s end (though I’ve said that for the last two years…), I need to start cranking on IPMDT because I only have two finished strips left. There’s also the mini comic I started playing around with, Inside Toby’s Brain, as well as the mini comic my wife wrote that I’d like to get into. I want to start moving on Revery again, and just yesterday, while on a family hike, I had my first new ideas in a long time for good ol’ Wilhelm pop into my head. I just need to prioritize, pick a direction, and start running!