Wow, four weeks, four shirts posted to my Etsy shop! So far, I’m sticking to alternating between a PMD related shirt and some of my other designs, we’ll see how long that holds up, especially as I get through the existing designs and start generating new stuff. I actually didn’t tweak this week’s design at all. It’s a simple, bold, graphic image that I am still fairly happy with, so I decided not to muck with it. 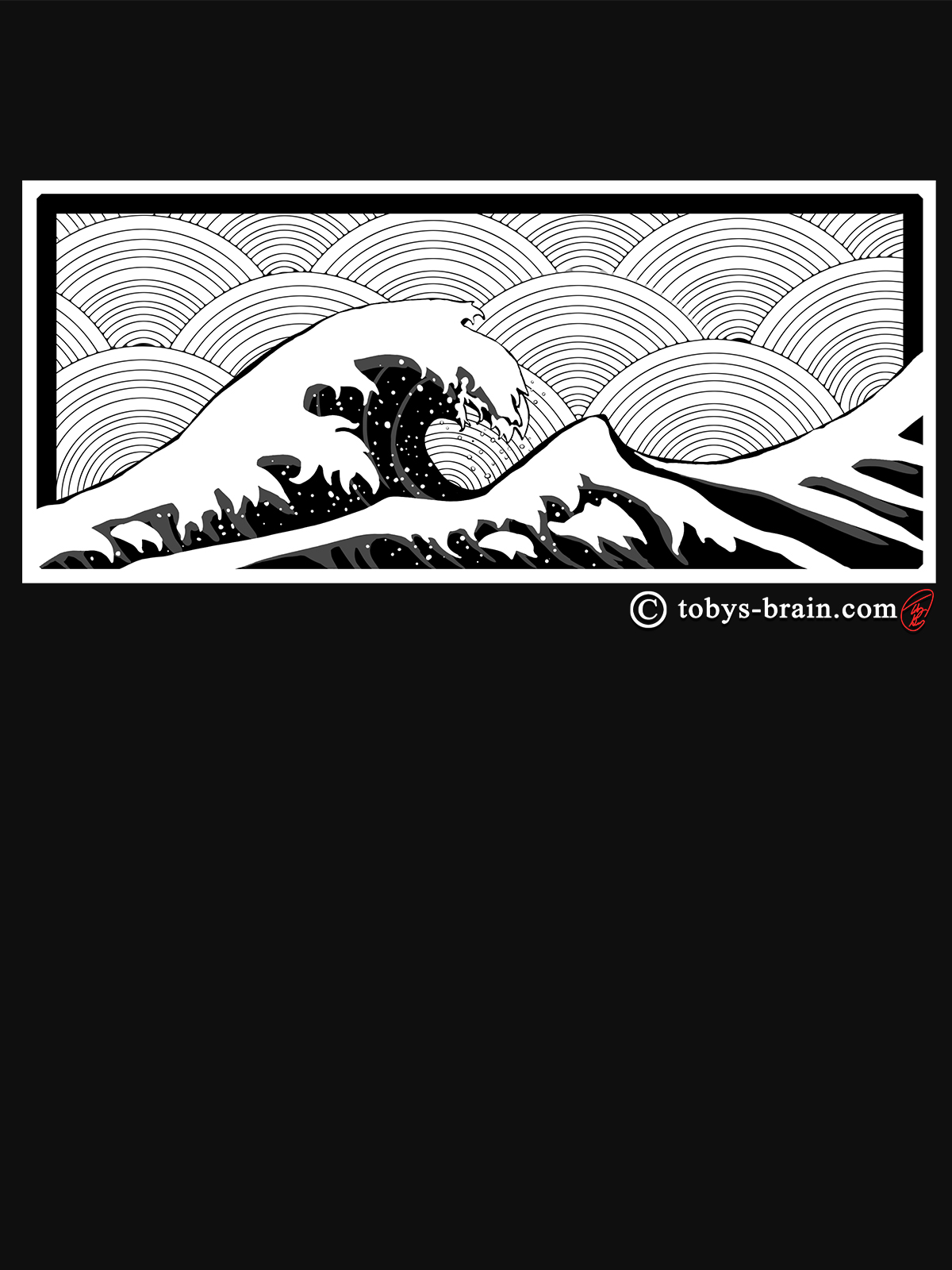 Here’s what I had to say about this image in the Etsy posting: This image is clearly inspired by famous Japanese artist Hokusai’s “The Great Wave”. I have been a student of traditional martial arts since 1995, and along with that comes a great appreciation for the various cultures of origin and their art. The Great Wave is probably the most well-known piece crafted by Hokusai, and while this is a pale comparison to that work, it is an interpretation through a very personal filter. I grew up spending my summers at a small, peaceful beach in Rhode Island. My time spent there is the source of many wonderful memories made with my family. Spending time there very much shaped who I am. To this day, at nearly 41 years old, I still love heading down there, though far less frequently than in my youth, to dig my toes into the soft sand and play in the surf. I miss sitting on the small porch of the equally small “house” (no electricity or running water) reading a good book or a stack of comic books, staring out at the beautiful scenery, daydreaming in the sun, drawing, spending time with my family, and fallling asleep at night listenening to the sound of the crashing waves.

I’m pleased to be adding content to both Etsy and this site consistently lately, though I feel guilty that I’m not adding anything to the actual gallery. I’ve decided NOT to post the shirt design art there, just in case someone wanted to steal one of the images I guess. I supposed I’m not making it that much harder, but someone would have to actually go looking to find a good quality image within random blog posts rather than stumble across it looking through the gallery. Maybe that makes no sense. Either way, that’s how I’m doin’ it for now.

When not engaged in “life stuff”, shirt editings and postings, or drawing IPMDT panels, I’ve been making something cool: a wool coat. I picked up a bunch of wool blankets from thrift shops after watching a few videos about making wool pull overs, but me being me, I had to take things several steps further. I dreamed up something a bit more complex and Toby-ish. This all required a bunch of planning, replanning, daydreaming, and learning to use a sewing machine (and buying a new old sewing machine when I destroyed the existing one). The coat is functional, but not quite done (though if it’s anything like my art, I’ll never consider it “done”, just done enough. I keep thinking of improvements and adjustments I can make). I’ve filmed some of the process and taken pictures, so at some point I’ll edit together the video and throw it on YouTube. There’s a large bushcraft, outdoorsy, DIY, prepper community there that I might be able to redirect into fans of PMD and Toby’s Brain (hey, I’m interested in all those things, others might be, too.). In the past, I’ve made exercise and martial arts related posts to my Instagram account, which tend to get more views than art (at least mine), which has translated into a few fans over there. It might not work, but it’s worth a shot. There’s also a pipe dream of finding a way to get my Super Coats manufactured somewhere for sale. Like I said, very much a pipe dream, but I never discount any of my dreams.

Anywhat, here’s a peak at the coat: 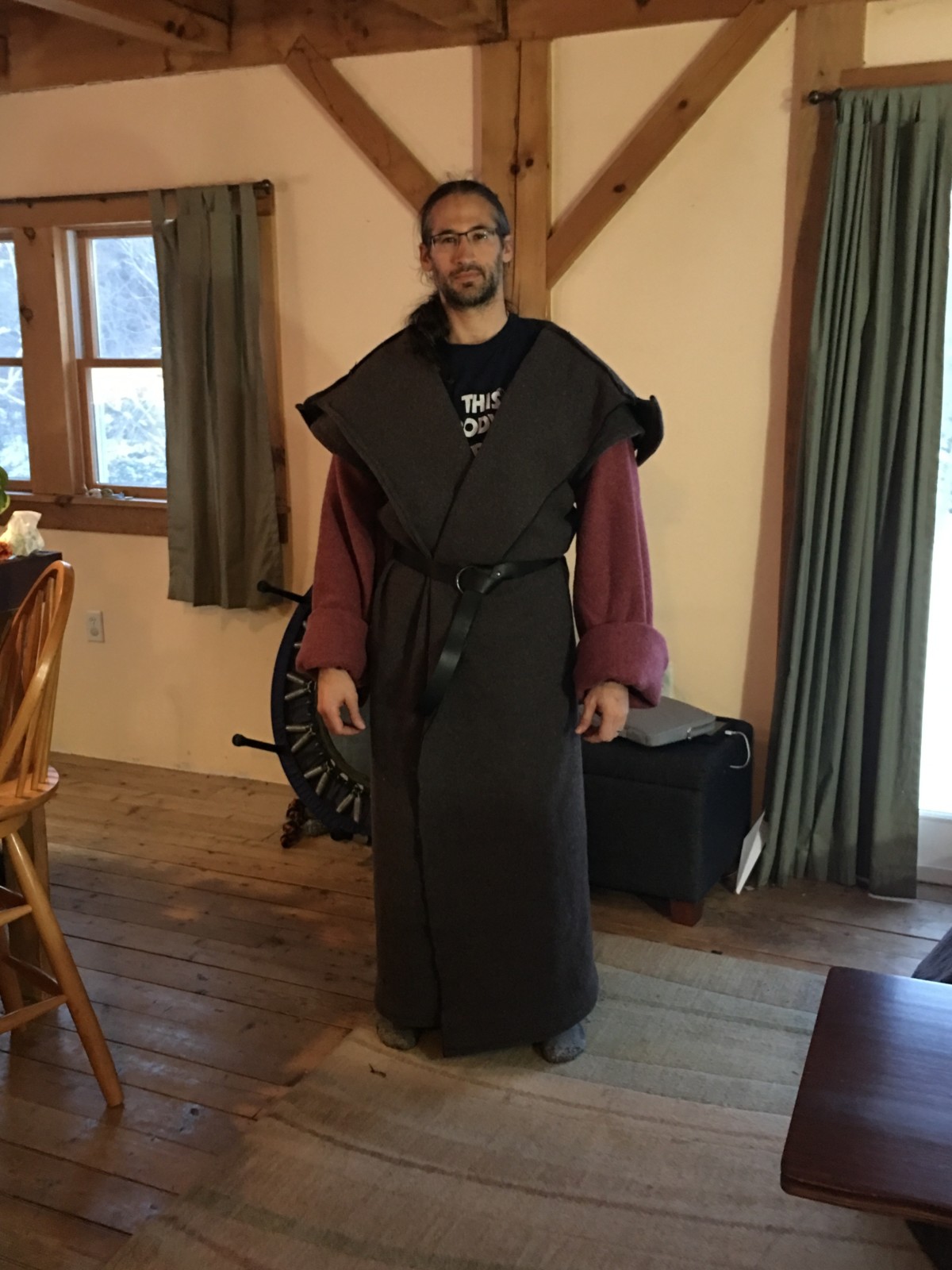 It started out as a capote style blanket coat, but it became more Jedi/monk-ish, which suits me just fine. 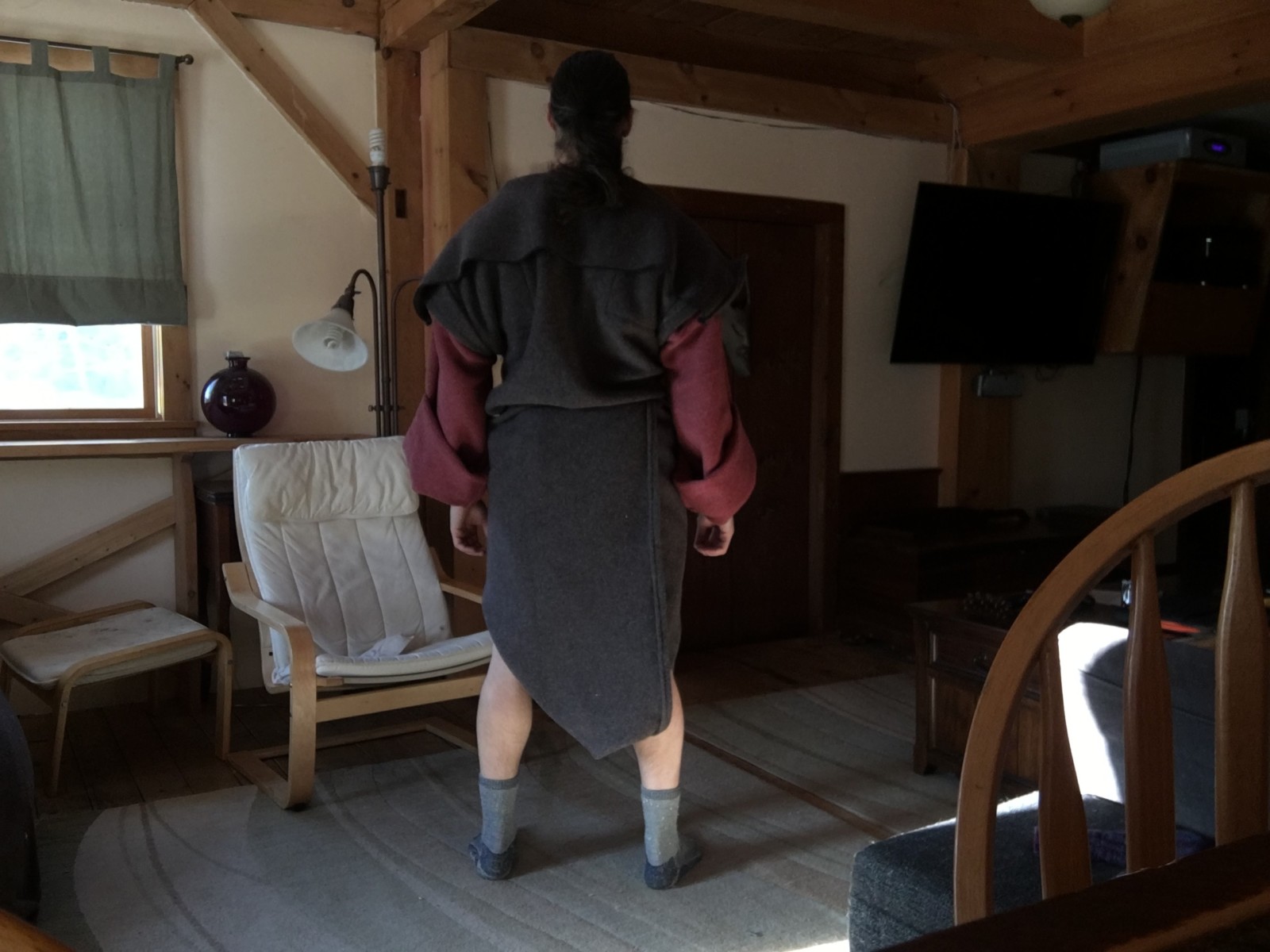 I think this shortening method is similar to the way a long kimono might be tucked to allow greater range of motion and freedom of movement. 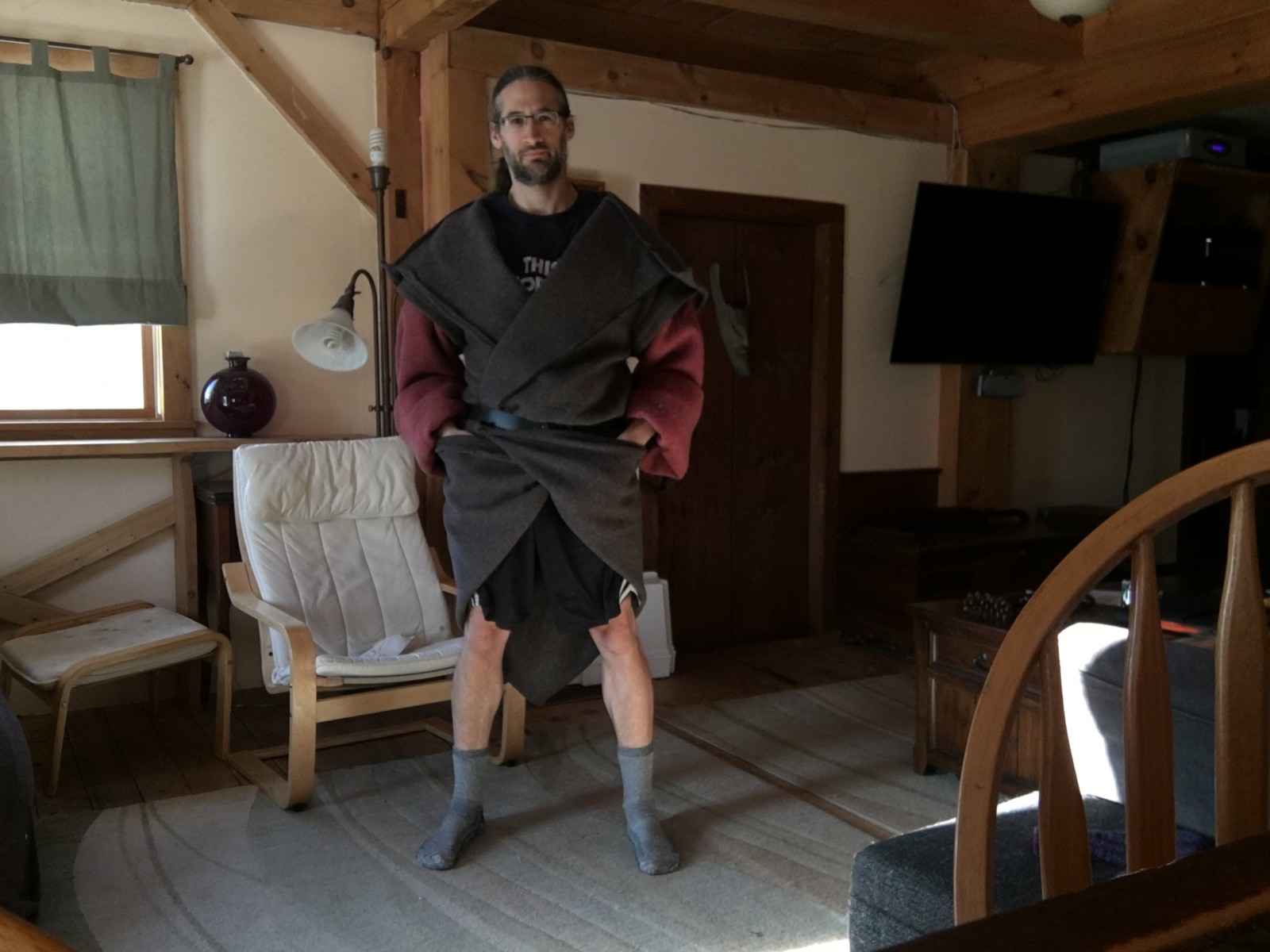 When I tuck the corners up in back on the belt, it also creates some nice pockets. 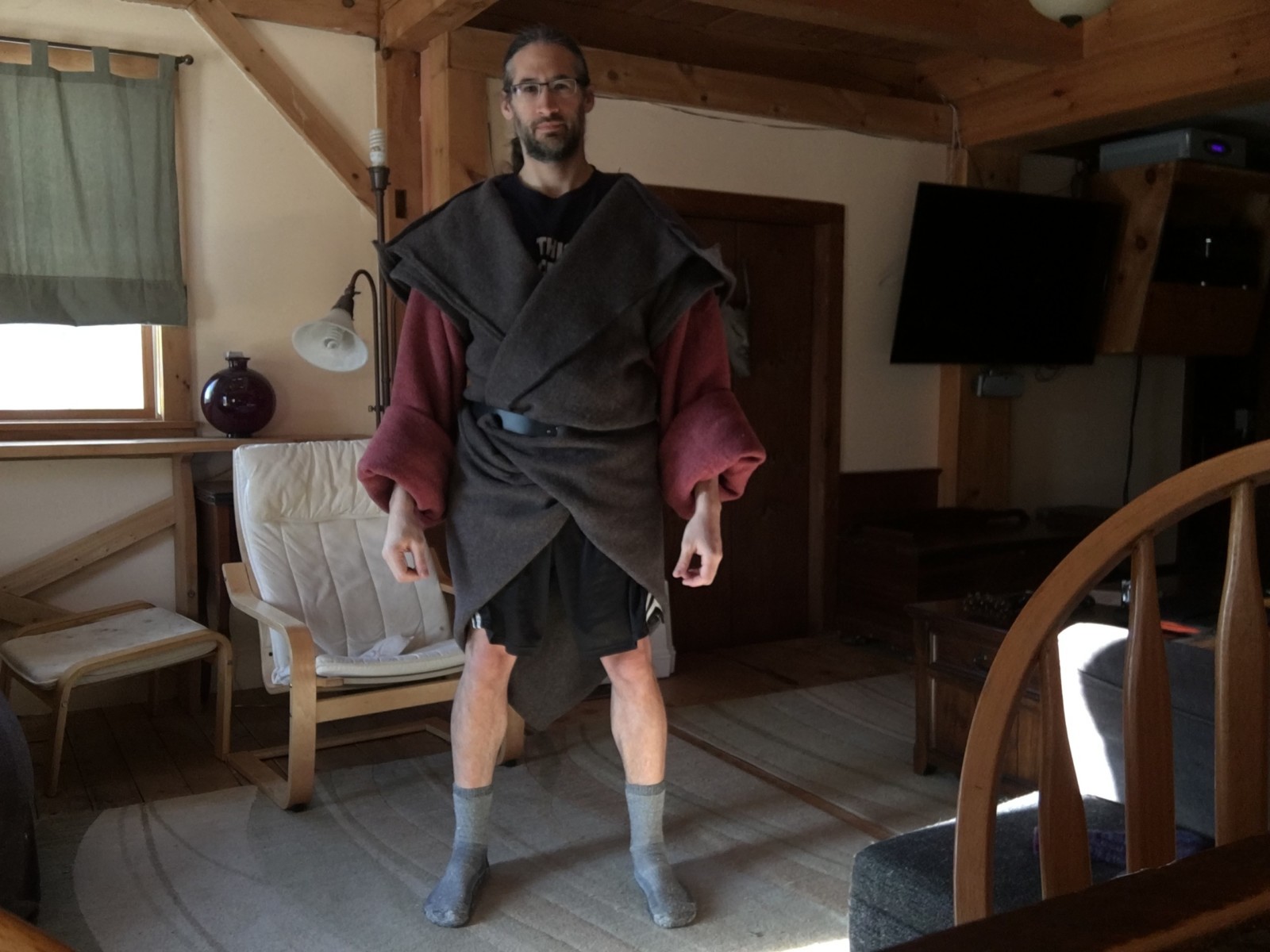 With a belt on, there are several ways to shorten the coat length to tunic length, which makes movement easier. 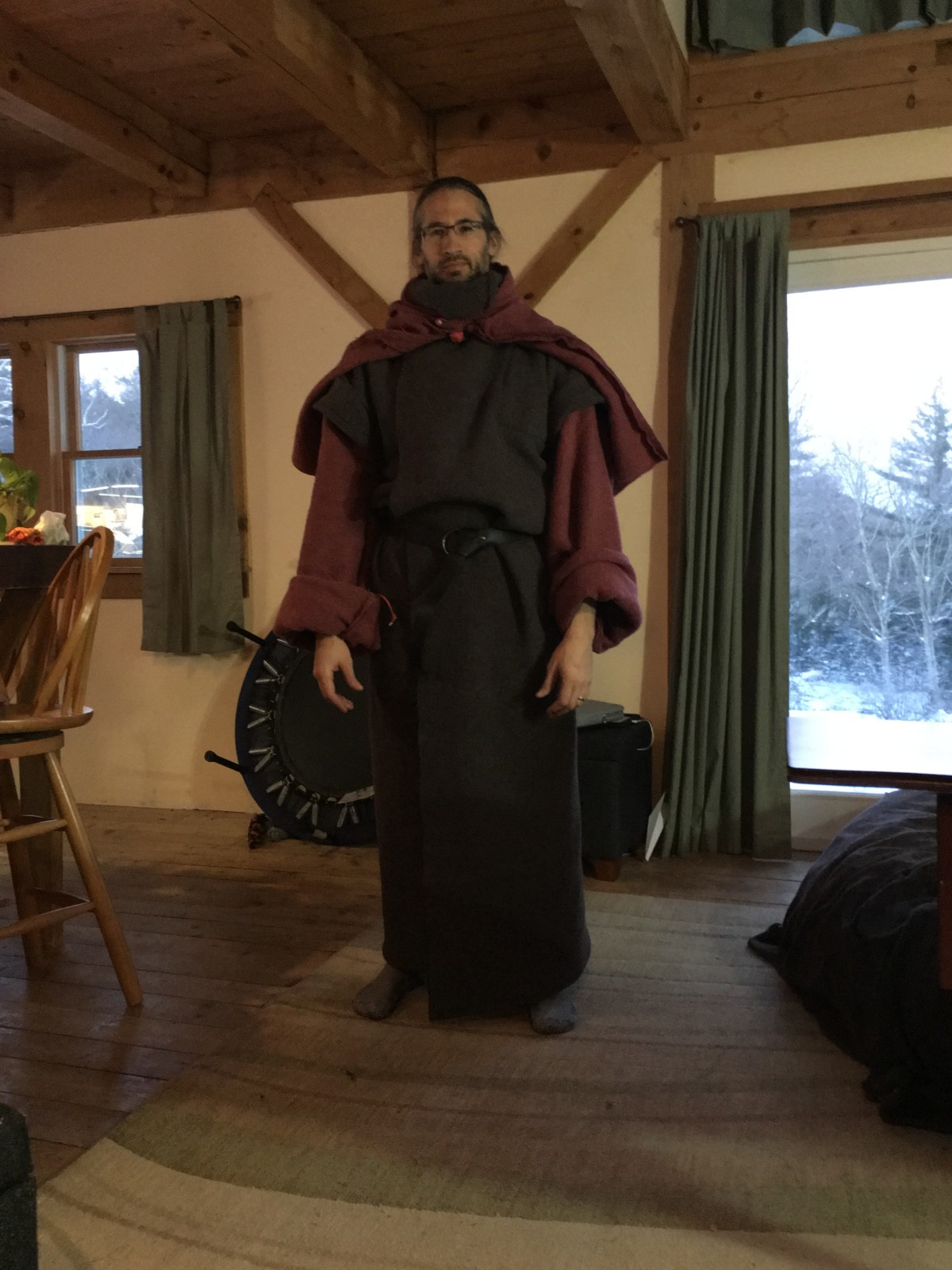 There are no buttons or zippers, just some paracord toggles and the magic of rolling fabric. And a belt, of course. This is meant to be an outdoor, camping coat, so I didn’t want anything that might get damaged or break in the field. 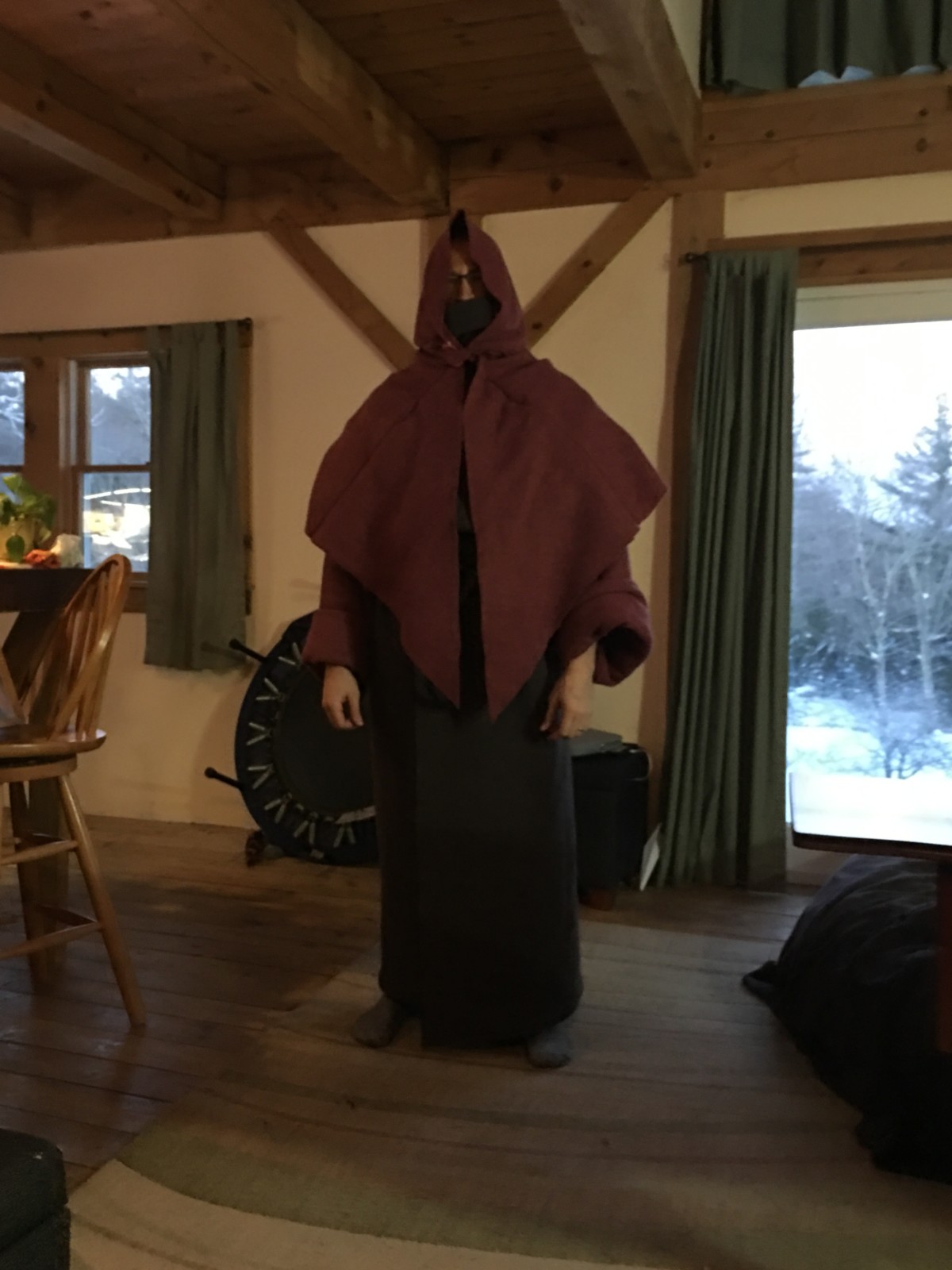 I also made a separate viking-style hood. The redish wool is a bit thinner and less dense, so I may end up lining it to help stop the wind from trickling through. 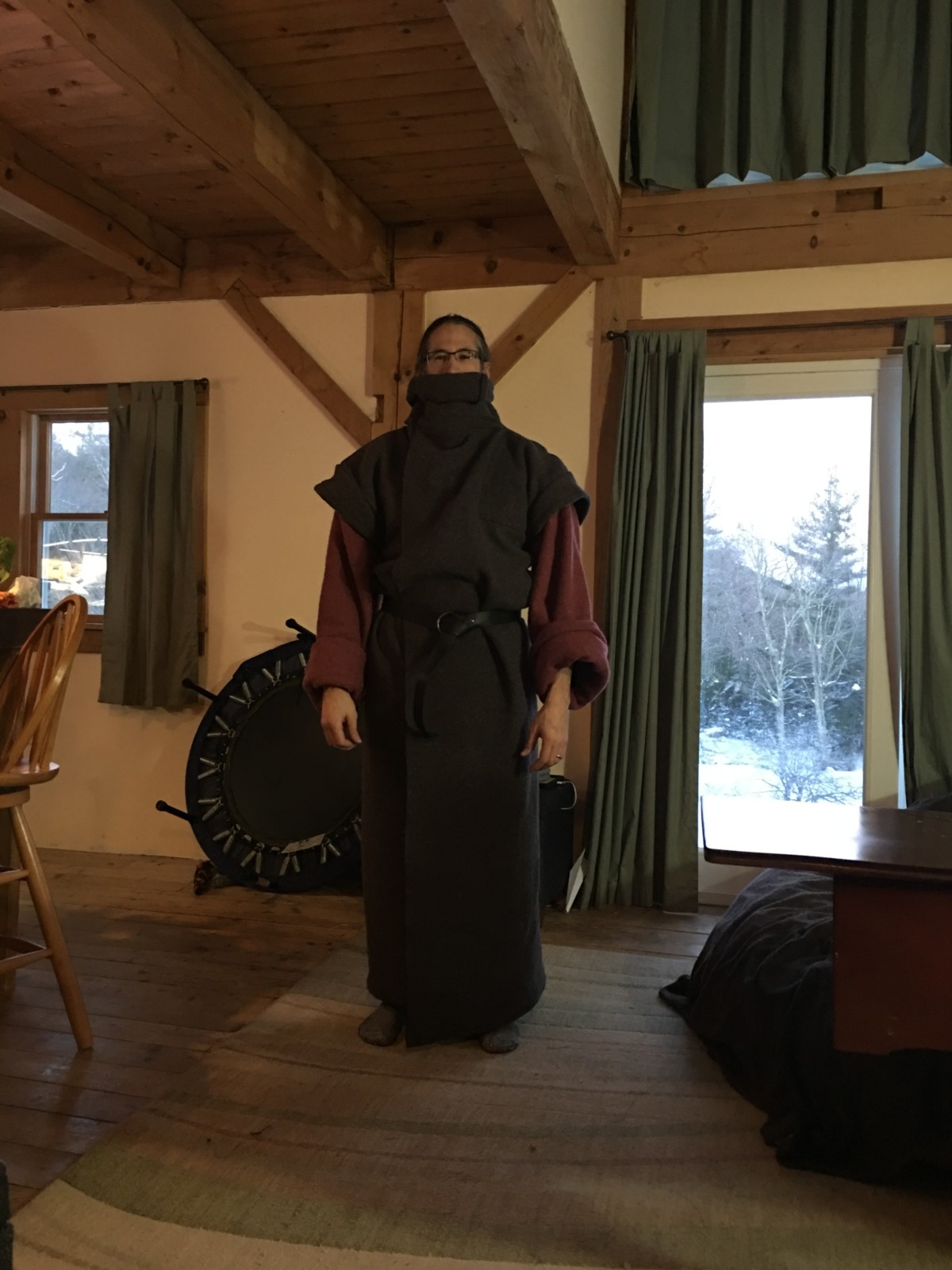 The extra wide collar stands up and rolls to make a really toasty neck and face warmer.

There you have it, time to get some art making or coat upgrades happening…