I told you my hot streak of blog posts at the start of the year wouldn’t last. It’s been a month or more since my last post here, but, as is usually the case, I’ve been keeping busy. I’ve been working on Inside Toby’s Brain a lot, as well as focusing on my latest sewing project for more than a month now, I think. Somewhere along the way, I also did another book cover for L.S. Gagnon: 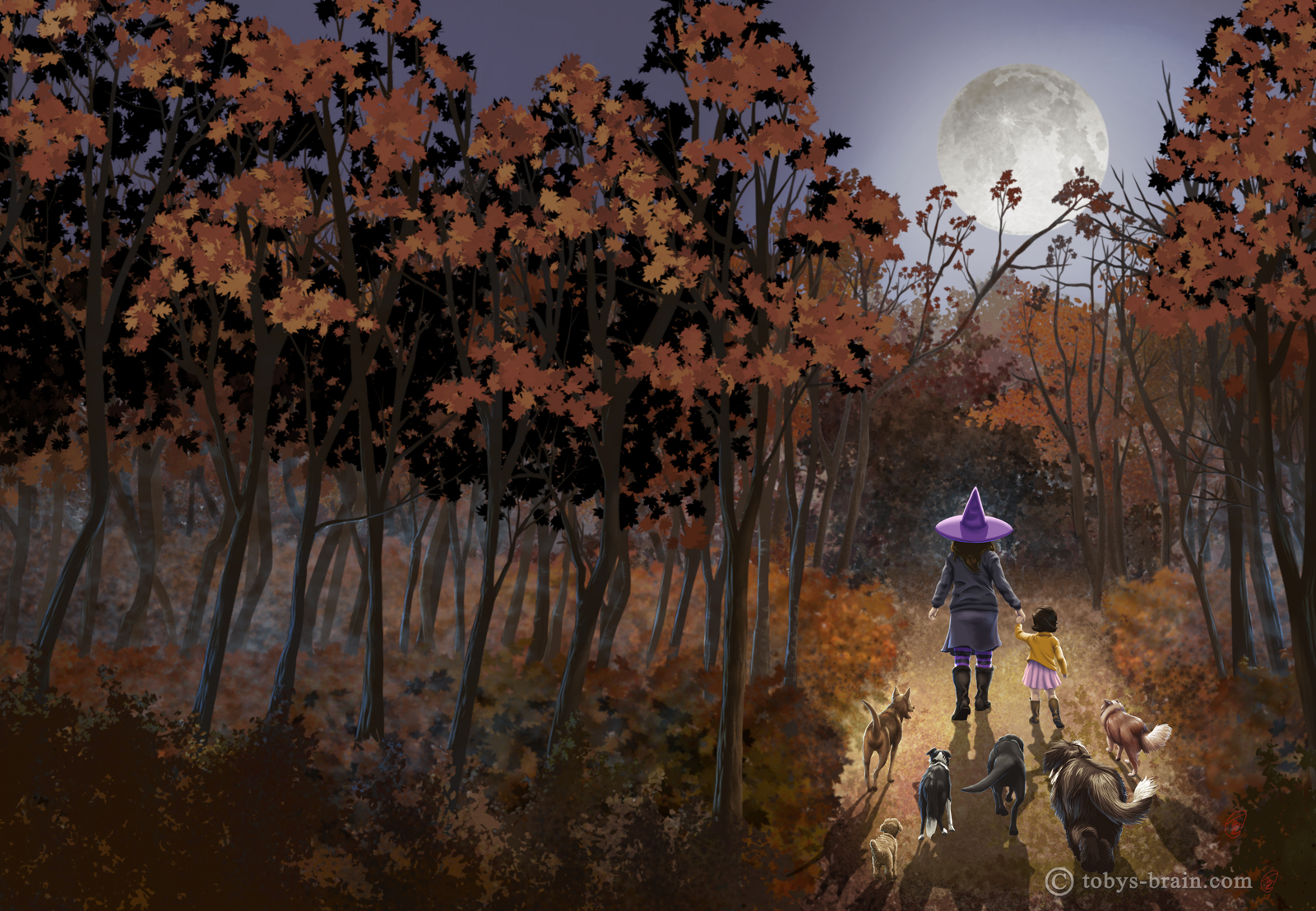 Thea The Little Witch: The Search for Coco is the sixth book in the series.

You can get a copy here. I did this, like that last cover I did for her, completely on my iPad using Clip Studio, which was great. The subject matter itself was challenging for me, though. Forests are difficult to render, especially for someone like me that is detail obsessed. I have a hard time not wanting to paint every single leaf. This project lead me to experiment with CSP’s custom brush engine for a bit, which was fun. The brushes I came up with helped, but still aren’t quite what I was going for. This cover also marks the first time I’ve painted a dog (and there’s six on this cover), and a small child. I could have spent triple the time I put into this pushing and noodling, trying to get things just right. But, that’s not entirely feasible when working for hire. As frustrated as I can get with my own skills or lack thereof, I’m still grateful for the little opportunities that come along to get paid to make art.

As I said, I’ve been keeping busy, trying to divide my time between sewing project obsessions (I’m currently waiting for some fabric and zippers to arrive so I can make my Vest of Holding. I’ve spent the last month designing and making patterns. I think it should be cool when it’s done, but I’m nervous that I’ve spent all this time and energy and I’m either going to mess up the construction or it’s not going to work the way I think, despite making a semi-functional mockup) and working on the Inside Toby’s Brain comic. I started out intending to tweak the overall look of ITB by adding my paper and pencil textures, but along the way decided to correct egregious drawing problems. That has turned into almost completely redrawing most of the panels. I know this is a never ending loop for me, I will never be happy and I’ll always want to make changes, but I’m hoping I can get things to a point at which I can comfortably move on to new pages soon.

The balance of sewing project during the day and drawing at night has been a decent one for me so far. I get to feed two of my biggest creative beasts and feel productive. I’ve been keeping track of my hours for about a year now, but lately I’ve started adding up hours spent on specific projects, or just total hours for a week. Some weeks I’m in the low 20 hours, other weeks I almost hit 40 with an average of about 30 hours a week. I lose a lot of time to various things over the course of a day, a lot of which can be attributed to my indecisiveness about what to work on, or having my mind preoccupied with one thing while I’m trying to do something else, the end result being my just sitting/laying there staring off into space (but my Brain is actually working while I do that and it’s a necessary step in my creative process, I just don’t count that as productive time because I’m not producing anything).

As for what else is on the horizon (thanks for asking), it’s already the end of March and I haven’t put out a new shirt design yet. Based on my goal of 6 new shirts a year, I should be releasing the second one by now. I will get on that in the near future. I also want to get back to work on IPMDT, and I’m really hoping I can make a few decisions and at least start working on the 1001 Totally Reasonable Uses for a Plunger (starring PMD, of course) book I’ve been thinking about. It’s hard to make consistent money as an artist if I don’t have products for people to buy. I haven’t managed to cultivate much of a following, but I keep hoping I get there one of these days. I recently had an uptick in traffic over on DeviantArt, I think mostly due to one of my “watchers” sharing that PMD Smile illustration I did to a group with a larger audience. Whenever someone appreciates my art, I feel humbled and grateful. I’m compelled to make art regardless of who else sees it, but it’s really nice to know that people do see it and enjoy it.

Anywhat, today has been one of those days where I am busy, but don’t feel like I have anything to show for it. Time to pick something and do it already…