So, how ya doin’? It’s been a bit. Again. I haven’t been very good about updating the content on this here digital manifestation of my Brain this year. I have been keeping busy, though. Aside from basic sketching practice, the vast majority of my studio time this year has been consumed by my Inktober illustrated book Inklings. It has been a ton of work, particularly since I designed three whole fonts and embellishments just for it. I may slap together a post about it at some point. Or maybe not. If you want to catch up and continue to follow the process, you can always find it on FaceBook, Instagram, and DeviantArt. It is possible I’ll have it done before the end of the year (maybe). When I’ll have it ready to print is another matter.

That’s not why we’re here, though. This post is to recognize and celebrate my super amazing wife’s birthday in my own unique way: the annual birthday dragon(s)!

I decided to get a little ambitious for the 2022 birthday dragon for my wife. One of my first ideas last year before I landed on the Cat Dragon was a small, bird-like perching dragon. When I started brainstorming for this year, I kept coming back to the Bird Dragon. Once I have an idea, I do some image searches of the animal that inspired that year’s dragon. The first image that really caught my eye was actually one of three birds: two already perched on a branch, and one coming in for a landing. I really liked the composition and action, it had life to it. The colors were vibrant, but, since my wife seems to prefer my black and white work, I had to figure out how I could capture that in greyscale. Or at least attempt to.
I also tried to indicate a little sexual dimorphism: The one coming in for a landing with the larger horns is a male. The middle one with the simpler horns is a female. The smaller one on the right with the stubby horns is a juvenile. They’re all fairly archaeopteryx-like. They have a mix of leathery wings, feathers, and some proto-almost hair like feathers, in addition to the more dragony faces and horns and such.
As I’ve mentioned in the past, I draw these as the wall paper for my wife’s pc, since she has to spend so many hours locked at her screen for work, and because she loves dragons. The source of my ideas is this half-formed concept of a planet that is inhabited completely by animals that all trace their evolutionary lineage back to a single dragon species. Like, dragons were a species on another planet and they were the dominant intelligent life form. They devised their own methods to become a space-faring species, and some of them set up shop on a lifeless planet far from their own. Perhaps they terraformed it. Perhaps something happened at some point and they lost much of their knowledge or “technology” and were reduced to fighting for survival on this new planet. They spread out, trying to take advantage of different climates and ecosystems, and divergent evolution started. There is a story and a bigger project buried in there somewhere, at a minimum an eventual illustrated “field guide” of all the different species or something.
This was definitely challenging, but a lot of fun, and it came together a lot faster than I anticipated. So quickly and almost easily that I reached a point where I still wanted to work on it, but couldn’t figure out what else to do. That’s one of those things I struggle with, though. If a piece doesn’t take eons, I automatically feel it mustn’t be good. I have a hard time judging my work based on the finished product, rather than the time spent. One of the many reasons that’s problematic is that I work digitally very frequently, which speeds up the creative process in general (that’s one of it’s huge perks). I’m also, theoretically, getting better at my craft, which should mean I’m more efficient and I can work faster.
Despite my hang ups, I’m pretty happy with this one. I do think I need to work out a better method of planning my lighting, though. It’s not an afterthought, but I should spend more time planning and blocking it out during the sketch phase, before I get so absorbed into details that I’m afraid to hide them with more dramatic lighting. That’s one of many areas I definitely want to “level up” in: dramatic lighting. 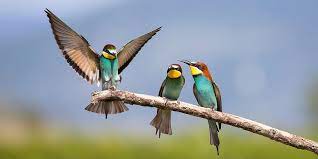 This is the main inspiration behind this year’s dragon illustration. If I knew who to credit for this beautiful photo, I would.

Of course, what would the annual birthday dragon blog post be without several zoom-ins of the details I include that otherwise can’t be seen because I can’t help myself (I have a problem).

The wide monitor size makes the compositions a bit more challenging these days, but I still try to pack in my details.

I really liked the way some of the foliage turned out, like the thicker branch in the foreground and the textures on the branch they’re all perched on. I took some tips from the wildlife photos I was looking at for the far background, too. I used one of my custom made leaf brushes to create some leafy clumps, then hit them with a heavy blur filter, almost like they’re out of focus because the “camera” is focusing on the dragons. It’s something I’ve seen done before and intended to implement, but haven’t really had many chances to until now.

Many of the illustrators I admire do wonderful and amazing things with lighting. It’s something I need to do better. A quick trick I like to throw in, though, is to add some strong rays of light, then blur them and lower the opacity. Sometimes I’ll add some bright spatters, like dust floating in the air catching the light, that I’ll similarly blur and make less opaque. It’s quick and easy and it can look cool in the right situations.

I looked at some pictures of bats. One of the many cool things about them is their wing anatomy. The skin stretched over the arms and fingers is thin and semi-translucent when back lit, so you can see some cool veins and arteries.

I like the way the female dragon turned out. I think she has a strong, interesting profile.

There it is, another year, another addition to the dragon planet bestiary. I did use Clip Studios timelapse feature, so I’ll have a video to post within the next few days, too. I’m a bit bummed as I wasn’t able to put this image on my wife’s desktop for her to find first thing in the morning. Stupid pc passwords that I can’t remember. Either way, a very happy birthday to my wonderful wife. She handles my eccentricities with grace and supports my crazy ambitions, and she’s pretty cool, too. I love you!