Yeah, I’m loving having this tablet to sneak in some extra work on. Not as much drawing on it at night as I would like yet, a lot of learning curve stuff for file management and customization and such, but it’s great for updating this place.

Speaking of updating, I’ll give a quick rundown of what I’ve been working on before tackling the subject of this post. I didn’t get anything done on IPMDT! today. I made a requested tweak to my latest cover for one of L.S. Gagnon’s witch books, then I started working on the next one. It should be a good one if I pull it off right. I’m trying a new method (to me) for laying things out: compositing. I scoured the internet for a variety of reference photos for the scene, then cut and pasted various bits, resized things, and pieced together a very rough layout that I then started sketching on top of. The photos won’t show up in the final, it’s just a quick and accurate way to get an idea of where I’m going. Tomorrow I’ll be spending some more time on it, hopefully, and maybe I’ll sneak in a panel or two for the strip (perhaps even at night).

Anywho, on to the moleskin sketches! These are from the week I spent with the Boys Scouts at Camp Bell. 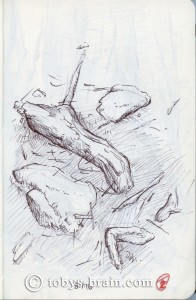 This is the first sketch I did at Camp Bell. Our camp site had a lot of cool trees, rocks, and roots. This particular sketch was a bit distracted and rushed, we were in “hurry up and wait” mode for checking in, and there was a lot of commotion from the boys setting up their tents and then getting antsy while waiting. 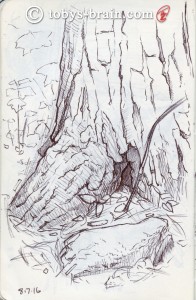 This beautiful tree was right outside my tent. I would have loved to have had more time on this sketch. 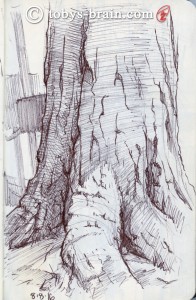 This large, gorgeous old tree was at the water front and was picking up some nice lighting in the afternoon while the other leaders and I waited for an instructor to show up for a class we were taking. I love the thick textures on these big old trees. 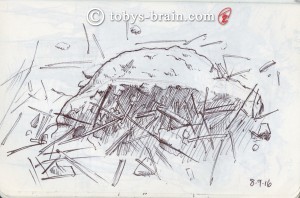 This was a rushed sketch of a rock poking up through the earth in the black smithing program area. Not long after starting this sketch, one of our younger scouts began having a difficult time with the activity and his mood was starting to spiral downwards. I stopped drawing and stepped in to help him eventually get back on track. 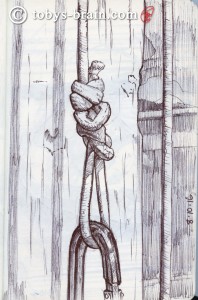 I got to spend a little bit more time on this sketch of some thin rope and a carabiner in the camp’s climbing barn. I love knots and all their different functions. Drawing knots can be challenging to wrap your head around without reference, so this was good practice. I liked the juxtaposition of the different materials in this scene as well: the wooden post, the rope, and the metal carabiner. 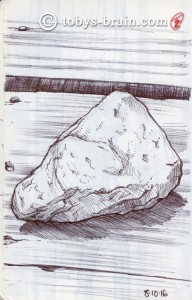 I found this cool rock at the water front, so I set it on the picnic table and drew it. I liked the contrasting textures of the rough rock on the weathered smooth table with the grain patterns showing strongly. 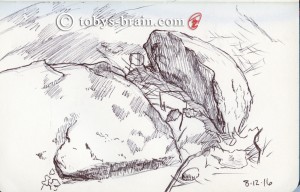 This is the last drawing I did at Camp Bell this summer. The leaders had some downtime at our site in the middle of the day, so I picked out this cool scene of a split rock and a micro valley inside. I like scenes that have a flexible sense of scale to them. I could easily imagine these elements being ginormous and me standing in that valley. That might be a fun, future drawing project…similar scenes from that perspective.

There you have it, the final installment of my 2016 summer camp sketches. I did fewer during my 7 days with the Boy Scouts than my 5 days with the Cub Scouts, but I also took training classes every day at Camp Bell. I did bring the tablet (nervously) along for the week, as well, so some of my drawing time was spent on that. I think I’ve finished that doodle I started, not sure it’s worth posting, but I probably will. It was just an exercise in experimenting with the Autodesk Sketchbook app as well as the tablet itself.

Speaking of drawing on the tablet, I should probably go try to squeeze some of that in before I ought to go to bed…