Look at that! Two weeks in a row! I’m surprising myself given how strapped for time and generally overwhelmed I am these days. I’ve been keeping busy in the studio as well as on the tablet at night (which might be leading to even more projects for my never ending list, which I’ll talk about here in the near future). I had to divert from 10 Things again, this time to focus on tshirt designs for both the Boy Scout Troop (the one that I’m now Scoutmaster of) and the Cub Scout summer camp shirts (my last one! I’m struggling with it, actually. I have a solid concept, but I’m having a hard time making it look good). I also had to whip up a 4th grade yearbook “shout out” for my youngest son (another last!) whose days in our little elementary school are winding down (*sniff*). That one was pretty fun, definitely my best of the three. I plan on doing a mini “retrospective” of all of them soon to compare the evolution of my technical skills as well as the overall look of PMD (who has starred in each of their shout outs).

Speaking of upcoming blog posts, I’ll probably delve into the new comic making/drawing app I’ve been exploring on my tablet at night called Medibang Paint. It’s pretty sweet! I’ve generated some work to post already, and I have more on the way. It’s kind of hard not to lose hours playing around with all the comic-specific tools the app has (like panel creation, snap guides for perspective and speedlines, halftones…it even has some nice functions that many of the other mobile drawing apps I’ve used lack, like clipping masks and layer folders). There’s a slightly more robust desktop version (I haven’t tried it yet, but it appears to have some slightly more powerful functions) that I plan to make time to use at some point. Oh, and did I mention it’s FREE!? Crazy.

Anywhat, a few weeks ago now, I finished up another cover commission for author Maryellen Worrell. She was very happy with my work on her other book (which was actually the second in the series) and she asked me to redo the cover of her first book: Red and the Curse of the Unspeakable. 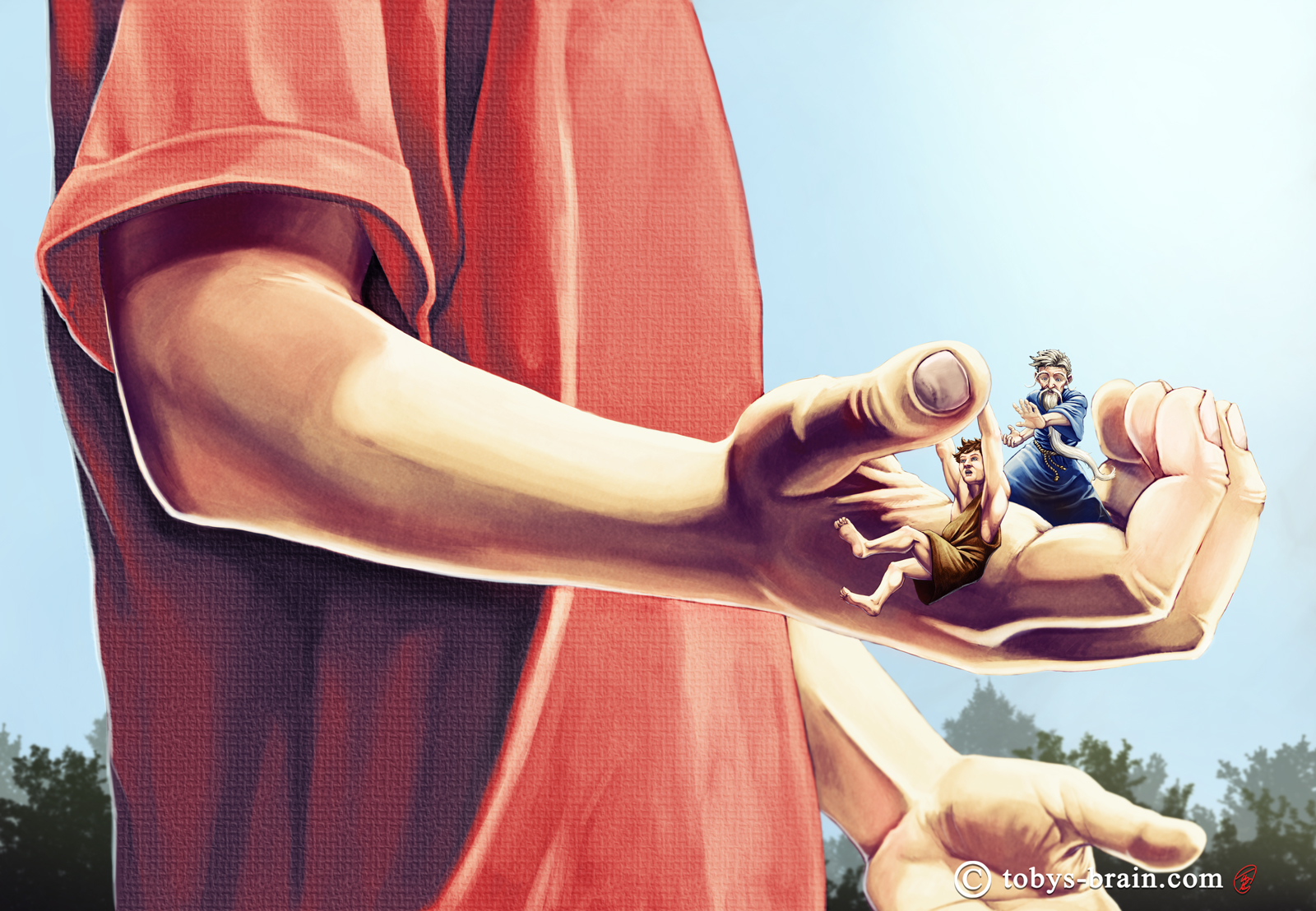 I had so much fun working on this cover! Maryellen gave me a few ideas, but when she mentioned a scene with the two main characters being carried around by a giant kid, I knew that’s what I wanted to focus on. I used my youngest son as the model for Thug (the large child), which really helped me compose the image. I really wanted to try painting in greyscale again, and the large shapes and figures made this an ideal image for it. There’s just something very satisfying about buidling up layers of greys to sculpt forms, then using gradient maps and color layers to add color. I was happy with the result, but it needed a little more, so I added the canvas texture to the shirt and a noise filter to the skin of Thug. I think it added some visual interest. I toyed with the idea of doing more with the sky, but I decided it would detract from the figures, and much of it is bound to be obscurred by the title.

There you have it, my latest commission, probably one of my favorites so far (don’t be fooled, though, I still cringe at all of the things I think I should be able to do better…). Let’s see if my hectic life shedule allows me to remain mostly consistent not only in my studio but in keeping this place updated. I’ve been trying to make up for lost time elsewhere in my day by being produtive at night, which is great except when I’m in art mode, I often don’t recognize the passage of time, which leads to my being chronically over-tired. I know there’s some cliche about burning a candle at both ends or something, but I’m too tired to think of it (and besides, I like fire…not in an arsonist kind of way, but in the stereotypical Eagle Scout Pyromaniac kind of way…)