Hey, look at that! Another new shirt already! We are 3 months in to 2020 and I’m still on pace for my goal of 6 new shirts this year, so that’s good. I turned this one around relatively quickly (for me), but then again, it’s not a super complex image. Then again this is me we’re talking about, and I could very easily have spent another several weeks spinning my wheels, noodling around on details and variations and second guessing myself and never being ready to call this one “done”. I have found that generally I need to force myself to take a break for a day or two from the image I’m working on so I can come back and look at it with fresh eyes. That’s usually enough to break that never ending cycle so that I can call something done and move on.

Anyway, here it is:

As I was going through the process of converting some of my designs into potential stickers, which involves removing any heavy white borders (since the stickerization process adds a white border around the whole design) and moving my copyright watermarks around, I decided the very first shirt I made available on Etsy ought to be a sticker. I tried to open the layered Photoshop file for the It’s Plunger Monkey Dynamo shirt, only to discover (and remember) that the original file had been corrupted. Back when I first started designing shirts with the pipe dream of selling them online (pipe dream because I had the idea for selling shirts going all the way back to HS-but that was before interwebs-and once I started coming up with designs, it was several years before I figured out the process and went through the steps to set up a shop) I created all my designs in a single Photoshop document. The thing was probably several hundred layers, with each different design and variation being grouped into it’s own, multi-layer folder. It was a very sluggish document. Anyway, that shirt was in there. Somewhere along the line of upgrading computers and updating Photoshop, the file became corrupted. I have no idea how or why, and I don’t have the knowledge or skills to figure it out. The “style” of PMD was a bit dated anyway, so I decided I’d just redraw the whole thing and make a 2.0 version of the shirt AND make it a sticker. This time around, I created the whole thing in Clip Studio on my iPad. 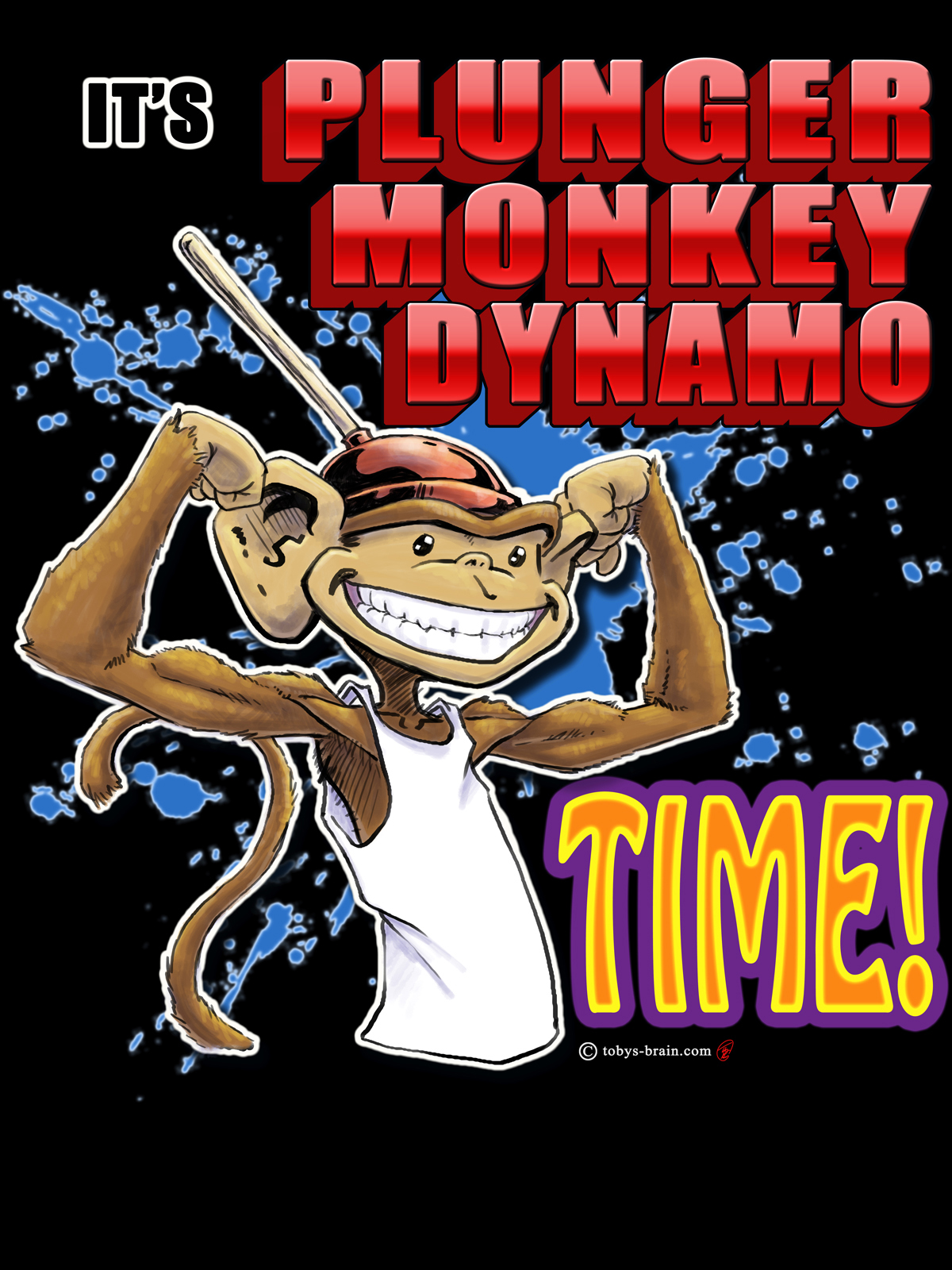 The original IPMDT shirt (1.0, if you will). The style difference is pretty apparent viewed side by side, as is PMD’s overall appearance.

Knowing ahead of time that I wanted to turn this into a sticker, I made certain design choices to save me some hassle, like including my copyright watermark inside that background circle, rather than have it on the outside like all the original shirts. I also went easy on the white borders.

Speaking of stickers, that’s the next step. I think I have all the images I want to use prepped and ready, it’s just a matter of ordering some samples without accidentally posting a listing before I see what they look like first hand. If they look good, they’ll be available soon after.

Next up on my project list is continuing to work on Inside Toby’s Brain so I can further refine my “style” and work flow in Clip Studio. I say every year “this is the year I’m going to start working on Revery again”, and 2020 is no different. The whole story was already thumbnailed out a decade or so ago. I drew 15 or more pages in Photoshop way back then. But, my skills have improved, my “style” has changed a bit, so those pages will undoubtedly need some reworking. I’m also thinking I’m going to need to do some edits to the thumbnails to reflect my current design sensibilities. I also want to do some proper concept art and character turn arounds so I have an easier time being consistent.

In addition to that, I plan to get back into It’s Plunger Monkey Dynamo Time again. And I still have that loose idea for my next “book”: 1001 Totally Reasonable Uses for a Plunger, based off of the xmas card envelope art I did last year.

All of that is really just scratching the surface of what’s jammed up in my Brain. There’s the whispers of a larger graphic novel project that has been with me for over 2 decades that I refer to as “Wilhelm” that I’d love to flesh out more some day. There are shadows of ideas for follow ups to Revery already. There’s more shirt ideas. There are a couple of video game thoughts, too (I’ve been watching the occasional YouTube video made by some indie game developers about what it’s like. I’ve always wanted to make a game, I have some ideas. I just don’t know if I’ve got it in me to spend the time learning the coding process. My kids are kind of into that, at least on some level, maybe I can talk them into a collaboration with their dear old dad…).

Oh, and I still have bags and gear I want to make. In fact, my next bag designs might be a priority soon as they are back to keeping me awake at night since I’ve realized some of the flaws and draw backs to the bags I’ve already made. I also have a really cool idea for a multi-functional wool poncho that will be great for early and late hiking season.