Does two people count as a fandom? Let’s pretend it does. Okay, I do realize that between other friends and family, there are more than just two PMD fans, but these two stand out. 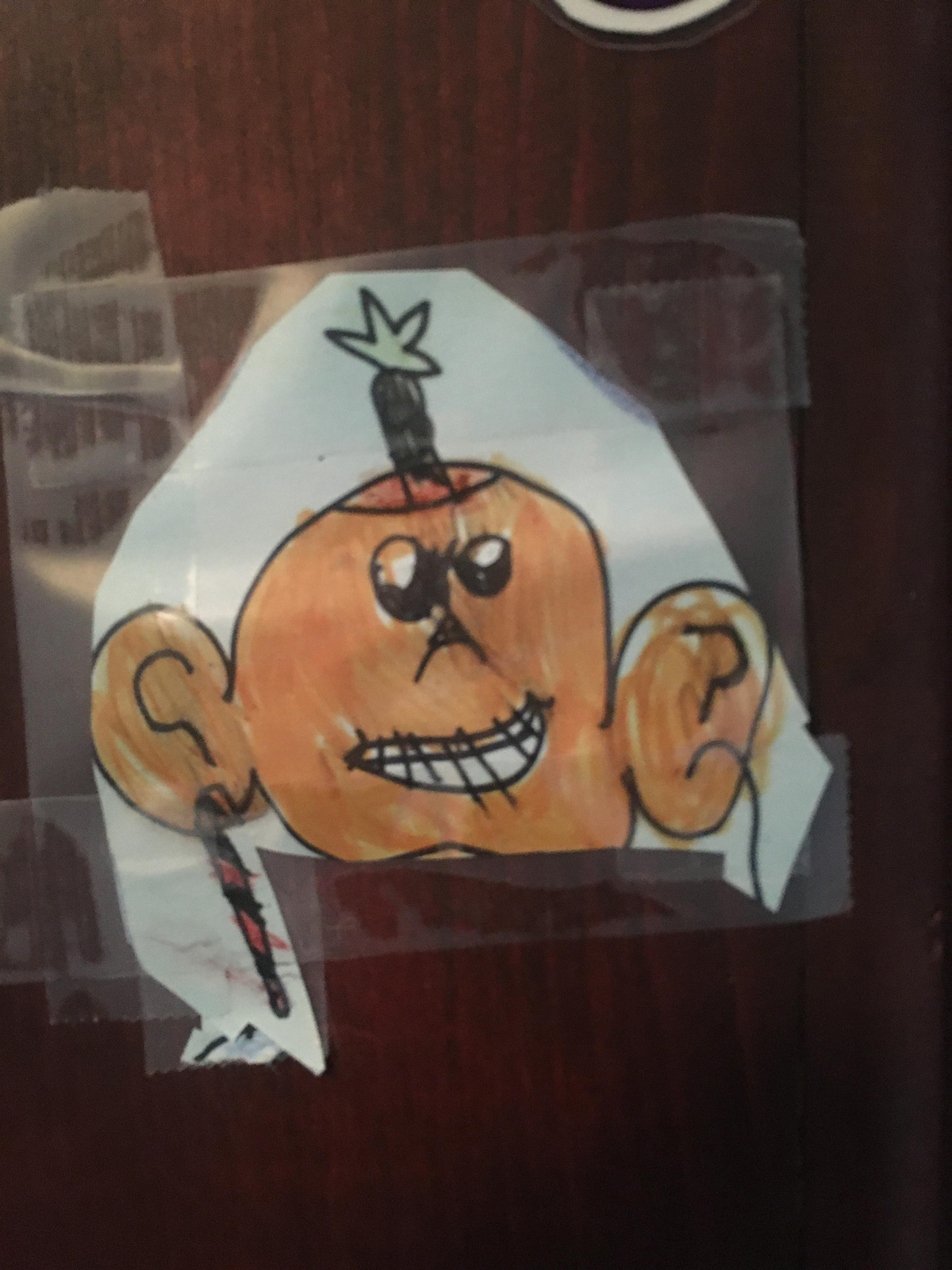 The daughter of one of my best friends from high school is apparently a PMD fan. This is her version of the xmas ornament I made and sent out a few years back and I love it. 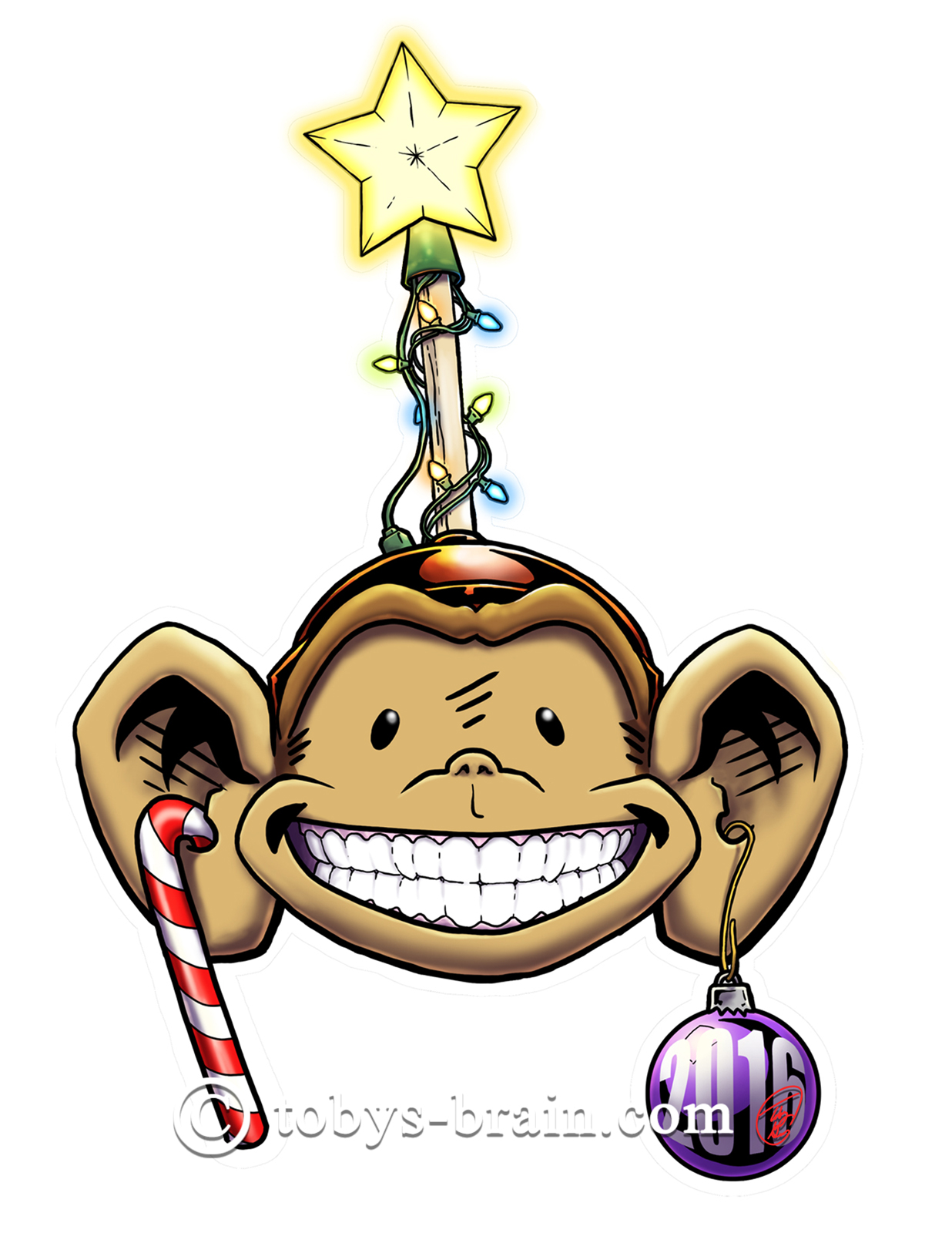 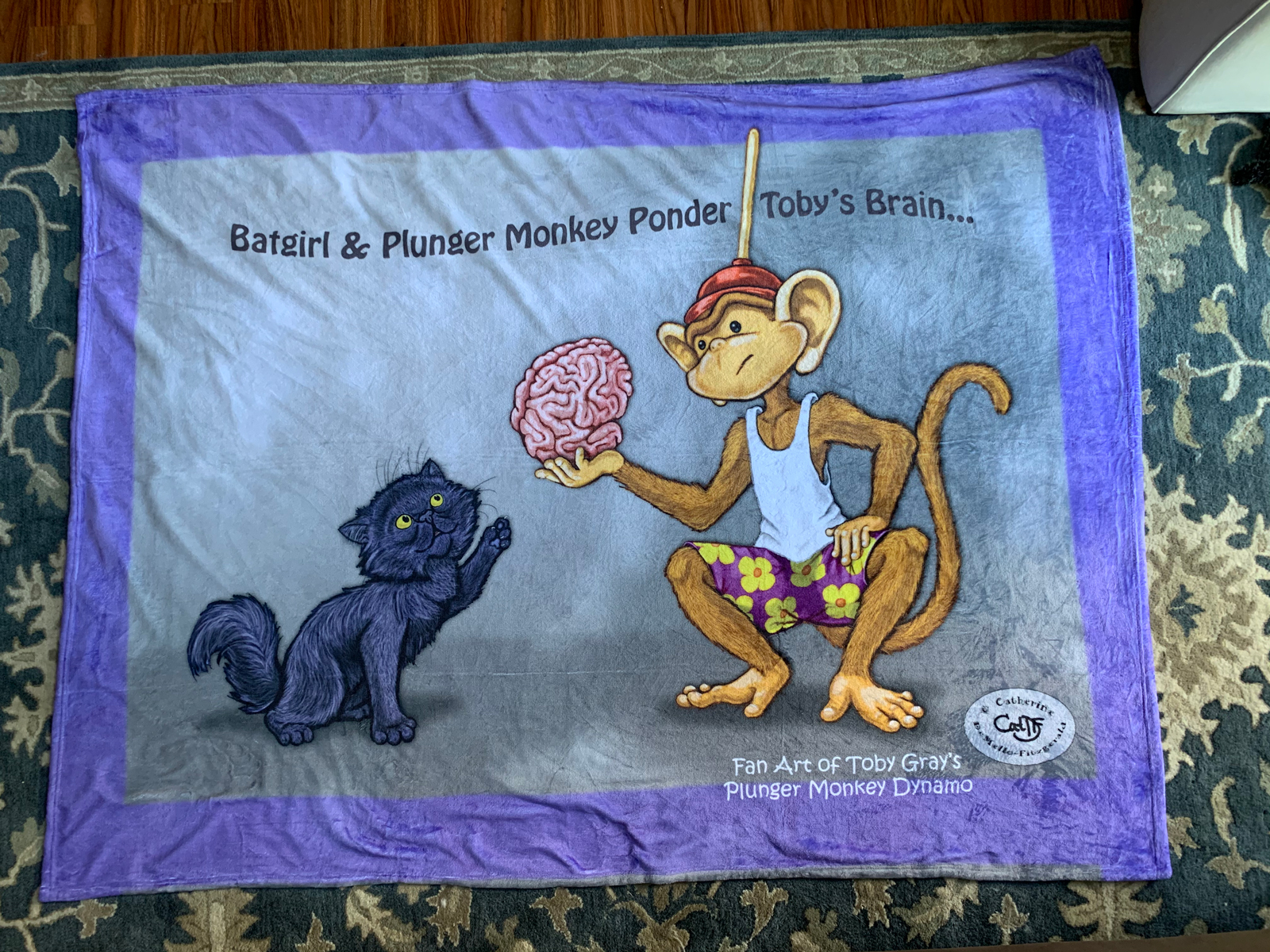 One of my best friends from my college days and super talented artist, Cat, made this fan art of PMD for me, just cuz she’s awesome. Batgirl is our infamous cat that likes to follow me around and climb on me, often perching on my shoulder. My brain is, well, my brain. I can remember back in Illustration 1 with Bob Selby being totally blown away by her art, which was cartoonyish animal-based (she’s loves animals). The fur textures she created were so detailed and life-like (and time consuming. I remember being amazed when she would tell me how many hours she would put into some of her work). The fact that it was water color also boggled my mind, because I had never seen anyone use water colors in a way that wasn’t “watery”. To this day, her style is still very unique, distinct, and totally identifiable as hers. 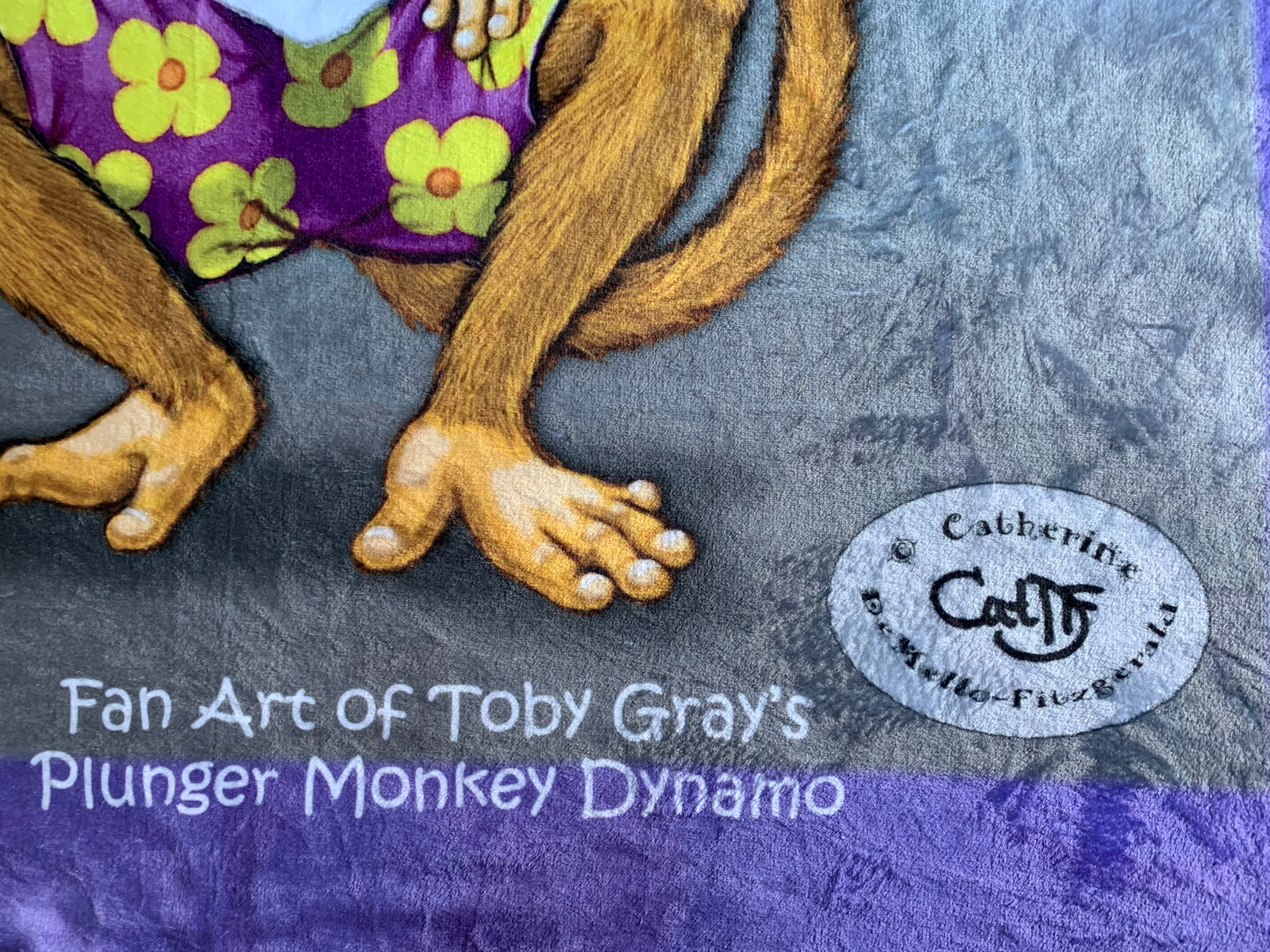 You can check out more of Cat’s beautiful art (and throw money at her) over on her FB page.

In other goings on, I’ve been plugging away on Inside Toby’s Brain. I made some custom paper and pencil textures that I’ve been experimenting with, and I’ve currently been spending my evenings reworking some of the earlier pages, both applying the new textures and redrawing some problematic stuff (mostly my own face. My face is a problem). I want to get my work flow sorted out so I can push forward on Revery (which I need to do some concept art for characters and “sets”). I have that Chicken Squid/Squid Chicken shirt to release that I keep forgetting about, as well as another idea or two I want to get to before the end of the year. I’ve plotted out several more IPMDT strips and I’ve been trying to work on those during the day. I’ve also been fleshing out an idea for a simple video game that I could theoretically get my kids to work on with me (2 out of 3 are at least semi-interested in coding and have enough knowledge to make the simple idea work, I think).

I’ve also started yet another “thing”: 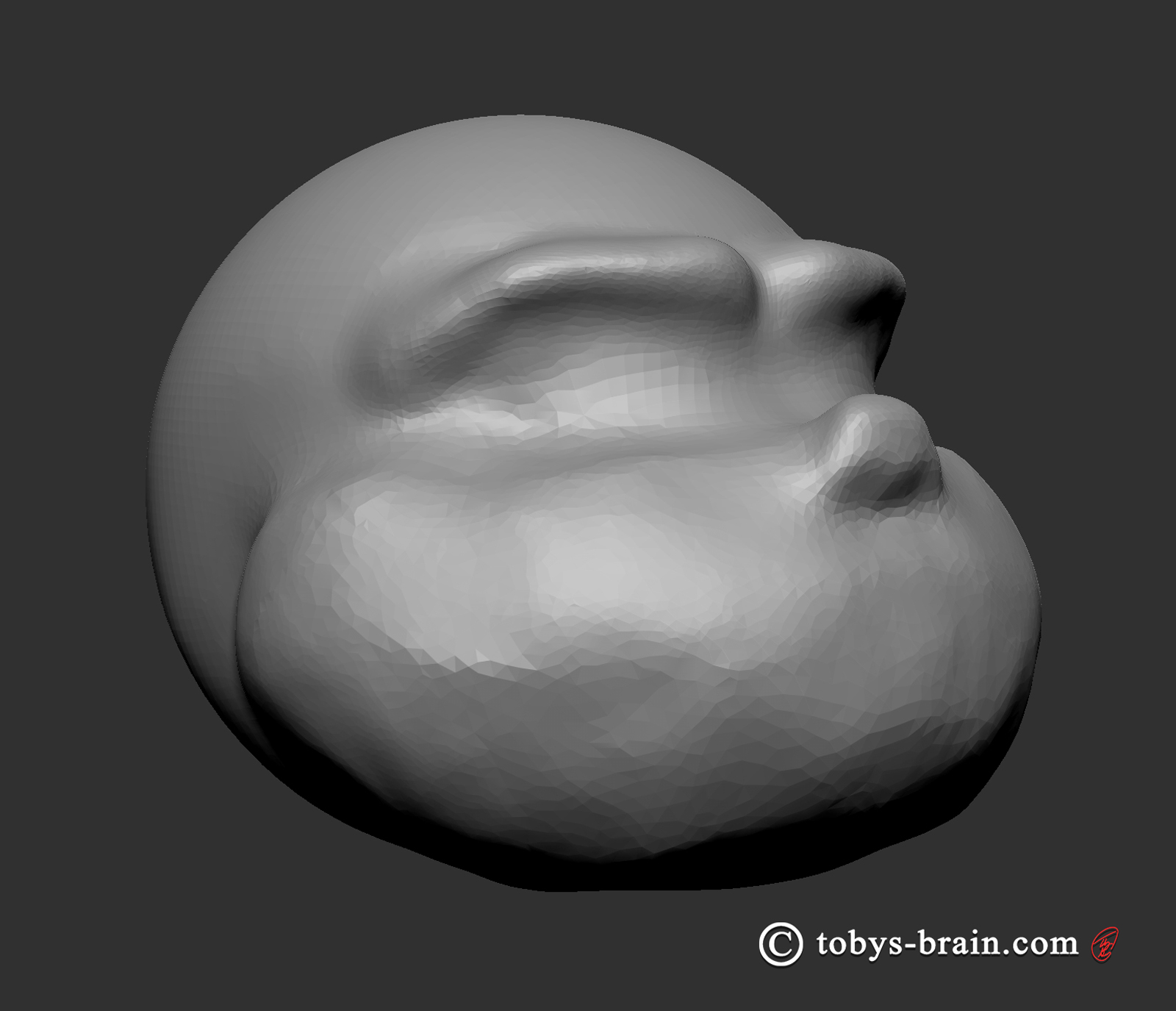 So, because my middle son became obsessed, we now own a 3D printer (two, actually, but the original one needs to get fixed up and sold off to cover part of the cost of the newer one). One of my longer term dream goals has always been to have statues and action figures of PMD and friends, as well as to make video games. Both of those endeavors might involve 3D modeling, so my awesome wife set me up with the free Z Brush Core Mini so I could start to learn this skill. I’ve always enjoyed carving and clay sculpture, but I don’t often do it as it makes a mess, takes up space, and takes up a lot of time (especially in the set up and clean up), and I just don’t really have the proper set up and my life is too interrupted for me to really get into it. 3D modeling has the same perk as digital painting and drawing: no set up, no clean up, easy to pick up and put down due to distractions. I haven’t put too much time into this model yet, maybe an hour, but it’s coming along quick and is super fun.

There’s always a lot going on in my Brain, even if most of it doesn’t make it to the real world (I’ve mentioned many times how frequently I get distracted by other ideas, or other obligations, or simply become paralyzed between projects because there are too many things I want to do and I can’t settle on one). I didn’t even mention the next generation of EDC bag ideas, upgrades to my wool coat and poncho, 3D printing ideas, or revisiting my flying whales illustration…though I guess now I just did. Anyway, enough of this, time to start drawing.