I think at this point it’s safe to assume all of the xmas card envelopes I illustrated are in their respective intended hands, so I’m going to go ahead and share them all here. As I mentioned…somewhere, I returned to the theme I stumbled onto last year: Totally Reasonable Uses for a Plunger. It proved fun in 2019, it was equally fun in 2020, and I’m much more confident about the potential of turning the idea into a picture book of some type. I’m building a list of “uses” to illustrate, and the envelope art will serve as some highly refined compositional sketches. The big unknown right now is what format? Square? Landscape? Comic? Multiple images per page? Single page illustrations? Additional text? Color or black and white? What’s the overall “look” going to be…Hopefully I sort that out in the early part of this year, as I really think I could complete all the needed art in 2021 (not that I’m great with making those predictions).

Anywho, stick through to the end of the post for something a little extra. A bit of a teaser, if you will. 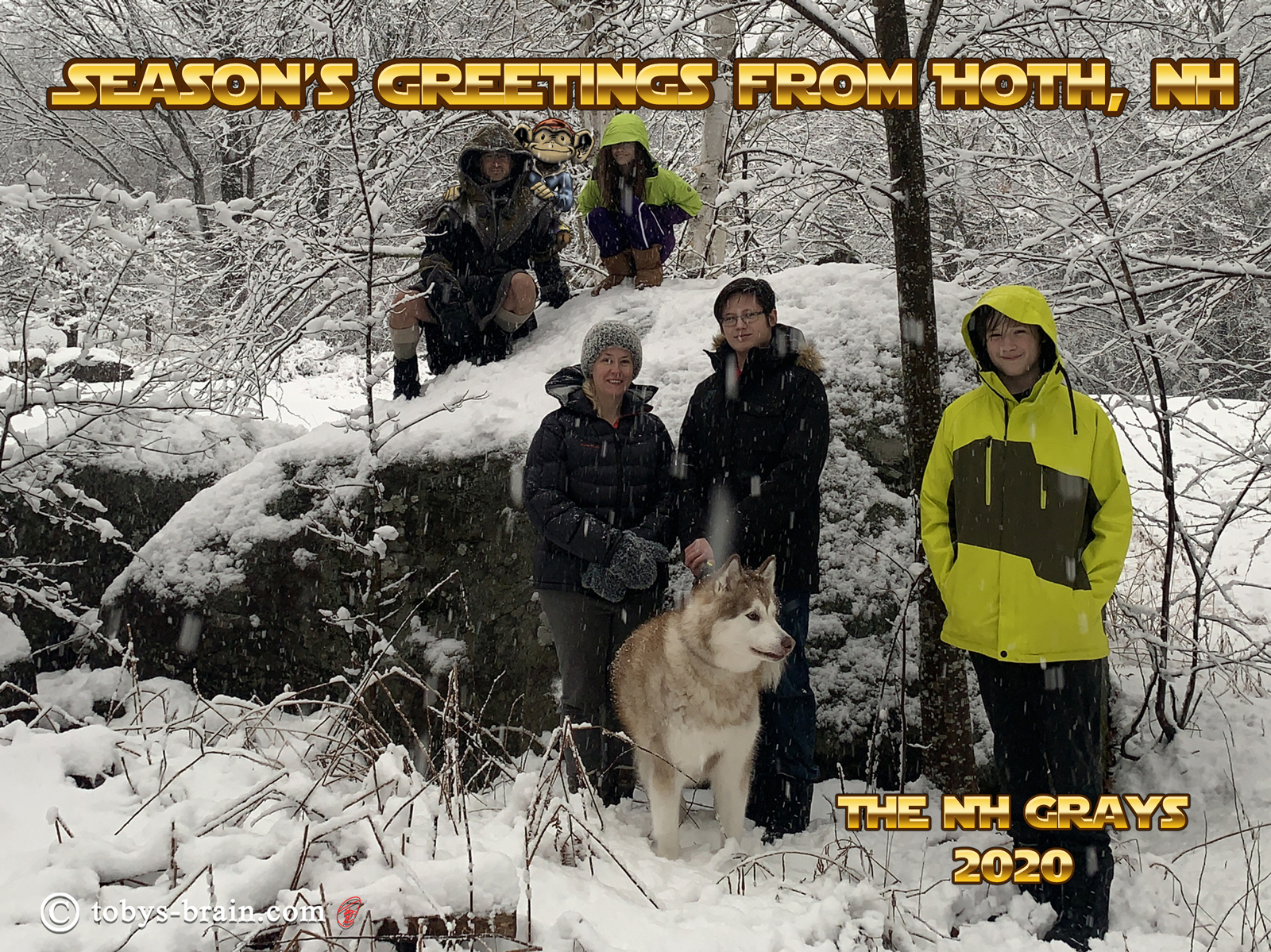 The annual NH Gray xmas card. It was really tricky to work PMD into this one, as the background is extremely busy with all the branches and the falling snow. It was tough to figure out what was in front of or behind him. I also had to draw him fairly small, which was a challenge. Getting him to look “natural” was tricky, too. I ended up having to desaturate his colors a lot to make him fit in with the overall flat lighting of the day. This was the first envelope I drew this year, and it went to my parents. They are huge PMD fans, and have always been unwaveringly supportive of my pursuit of art and of me in general. I kind of think the pencil is an appropriate “gag” because my dad idolized Walt Disney in his youth (and he’s still a fan) and at some point entertained the dreams of being a cartoonist. He ended up veering into architecture and was very successful, providing for his family while I pursued that dream of being a cartoonist/comic artist. 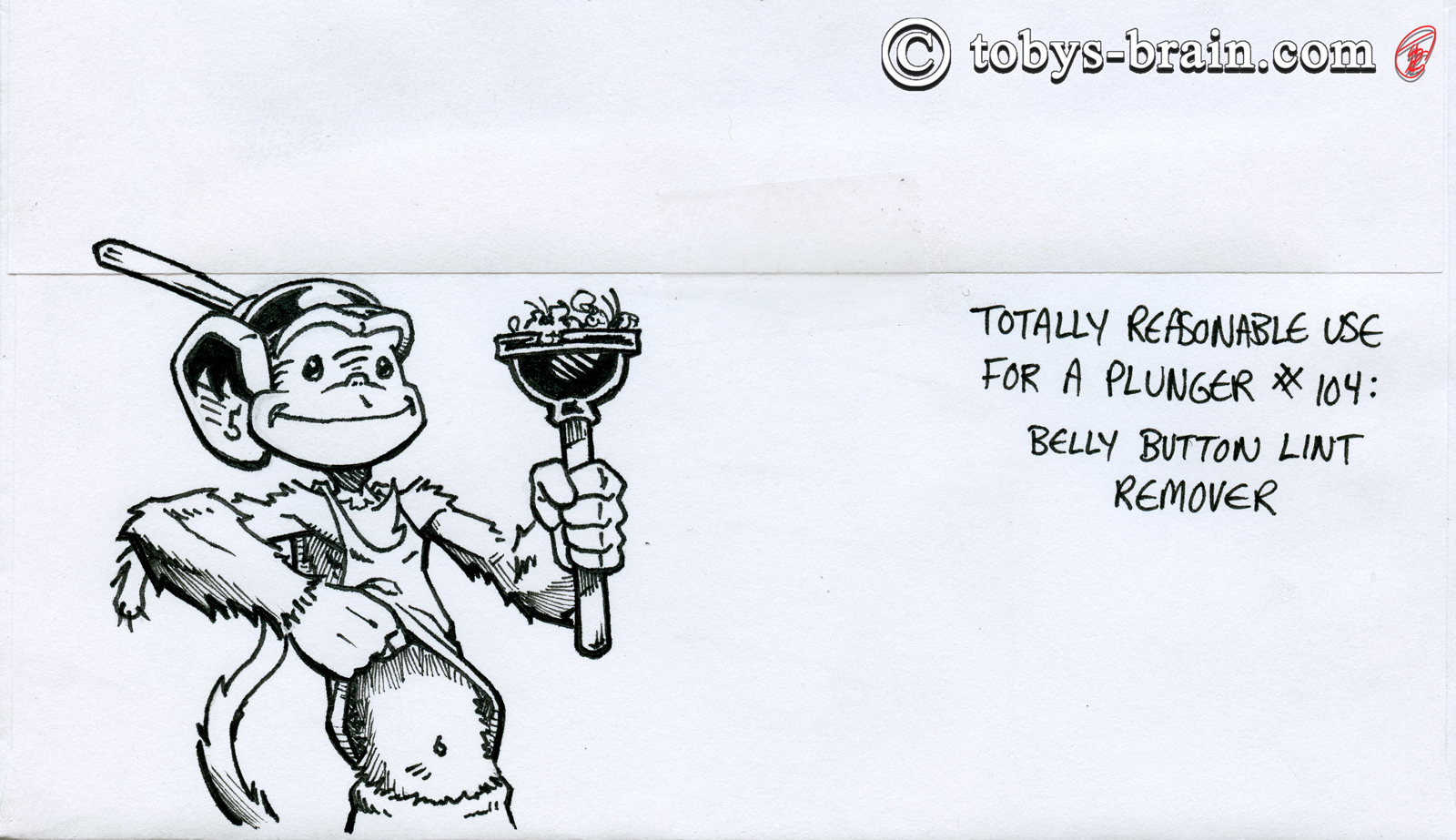 My older sister, Aimee, has always had a great sense of humor, particularly when it comes to all things burping, toilet related, or even belly button lint. I love it when something gets her laughing so hard her face turns red and she can barely speak. She also likes a good plunger joke. I’m just wondering if I will get a text about one of my nephews trying out the efficacy of this use for a plunger… 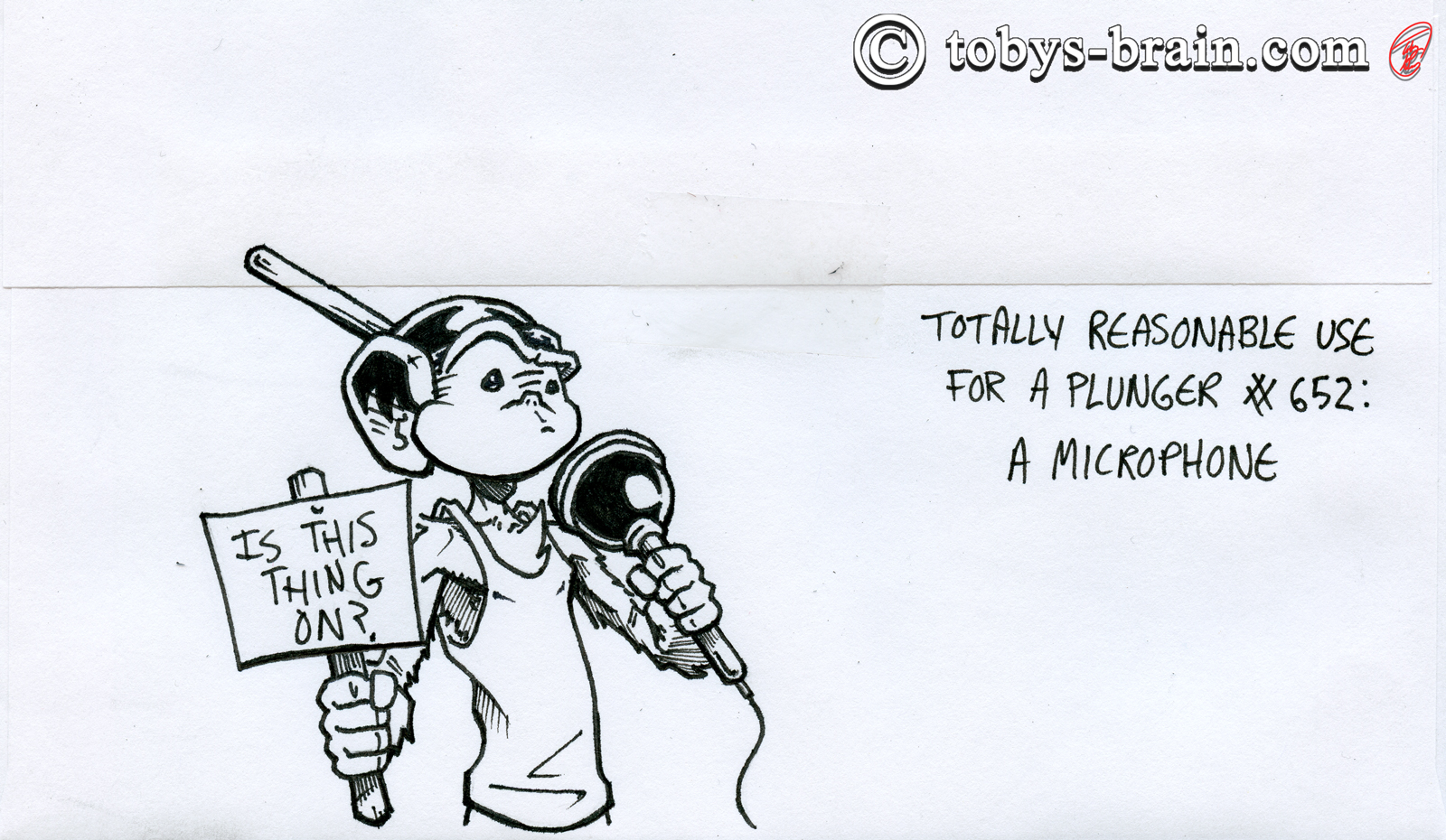 This one went to my younger brother, James, and family. I haven’t really thought about it in a long time, but plungers used to be a family point of humor growing up. I can remember being left home alone with him (when I was old enough and “responsible”…I’m 5 years older than him) and breaking out the plunger and chasing him around, laughing hysterically (him, too…I think. Maybe it was nervous laughter. Now I feel like a bully. I should find out if he has any lasting plunger-related trauma). There was one instance I went into the bathroom and yelled loudly, pretending someone had crawled in through the window and was attacking me. I then threw the plunger out the bathroom door into the hallway, where I knew my brother would see it. I thought it would have been hilarious from his perspective, I’m not sure if I actually thought he’d be fooled and concerned, though… 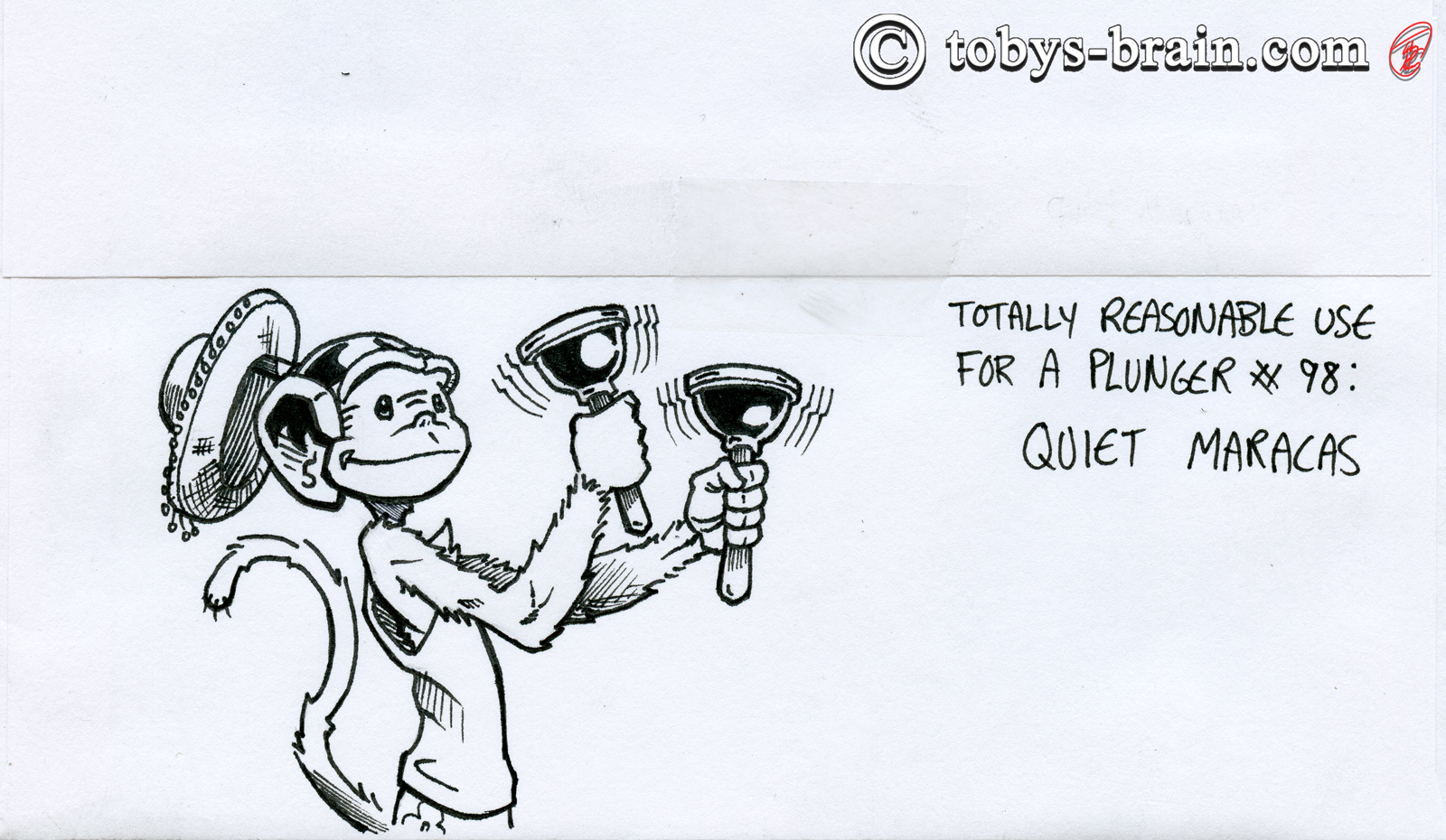 I sent this one to my cousin Cheryl. Our families grew up in the same town, just two streets away from each other. We all went to school together and frequently hung out on the weekends (I have many fond memories of us all playing Commander Keen at her house). I think she and I share a lot of personality traits, and have always gotten along really well. We even ended up at the same college (I was a few years older) and I talked her into joining the karate club I was in. I don’t get to see her much these days, between geographical distance and busy lives, but I always enjoy catching up with her when I do. So, yeah. Quiet maracas. 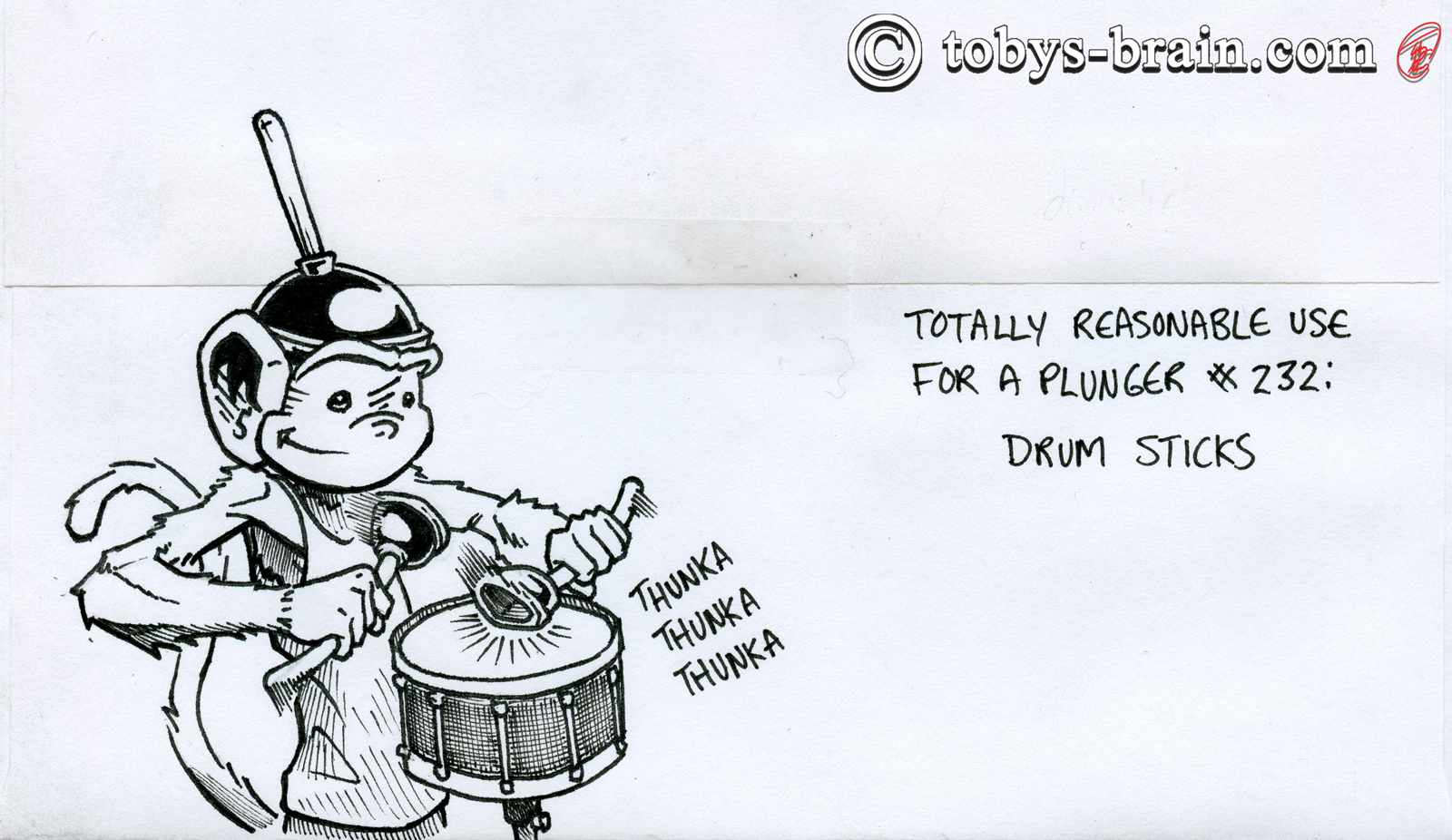 I sent this one to one of my best friends on the planet: Jorj. We met back in college, and he was part of a small, tight knit group of artist friends I had. I consider him family. We always have had a good connection, even when we go years without seeing one another. We have extremely similar personalities, we’re both very introverted but prone to extreme silliness in the right group/setting, we both like a lot of the same “nerd stuff”, we both like heavy metal…really the big difference is our appearance: I’m tall, long haired, and white, he’s shorter, black, and bald. It has always been our little joke that he’s the shorter, darker Toby, and I’m the taller, whiter, Jorj. In addition to being a great artist, he’s also an incredible musician. We are both fairly reserved, so I didn’t even know about that side of him for a long time. The first time I heard him sing my brain exploded (which might account for some current issues), I even had him sing at my wedding (as did our mutual friend Bill). In recent years, Jorj took up drumming, hence this image. Now I want video of him playing his drums with plungers… 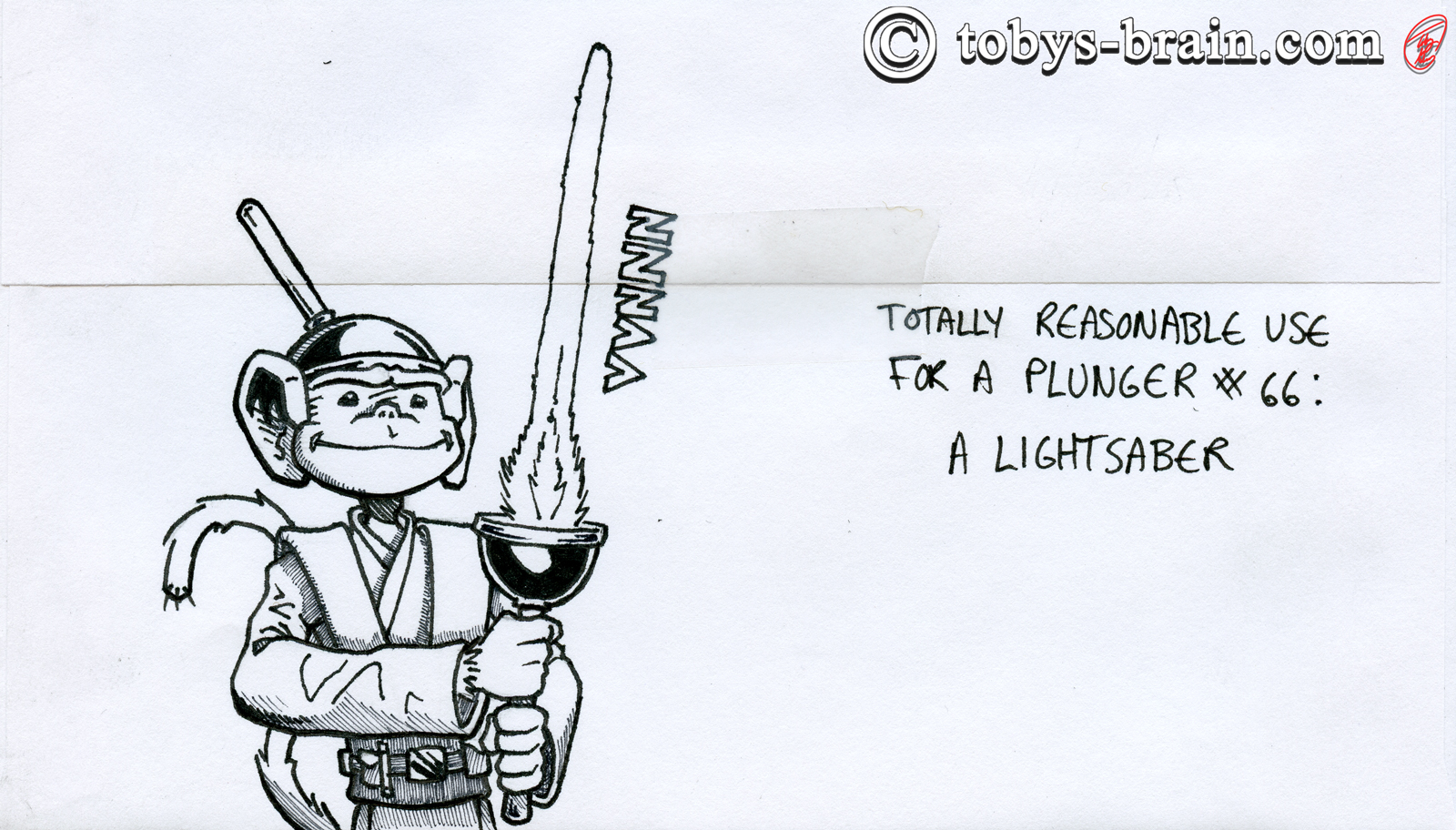 One of my other best friends, Bill, and I share an intense love of all things Star Wars. It was one of the early things we bonded over when we first met through Jorj. It’s not uncommon for us to devolve into Star Wars nerd talk or to make random Star Wars references on the rare occasions we are actually together. We’ve been to several opening nights together, and spend hours afterwards talking Star Wars. He’s spreading the Force to his youngest daughter, as well, so I try to come up with a Star Wars themed illustration for them every year. 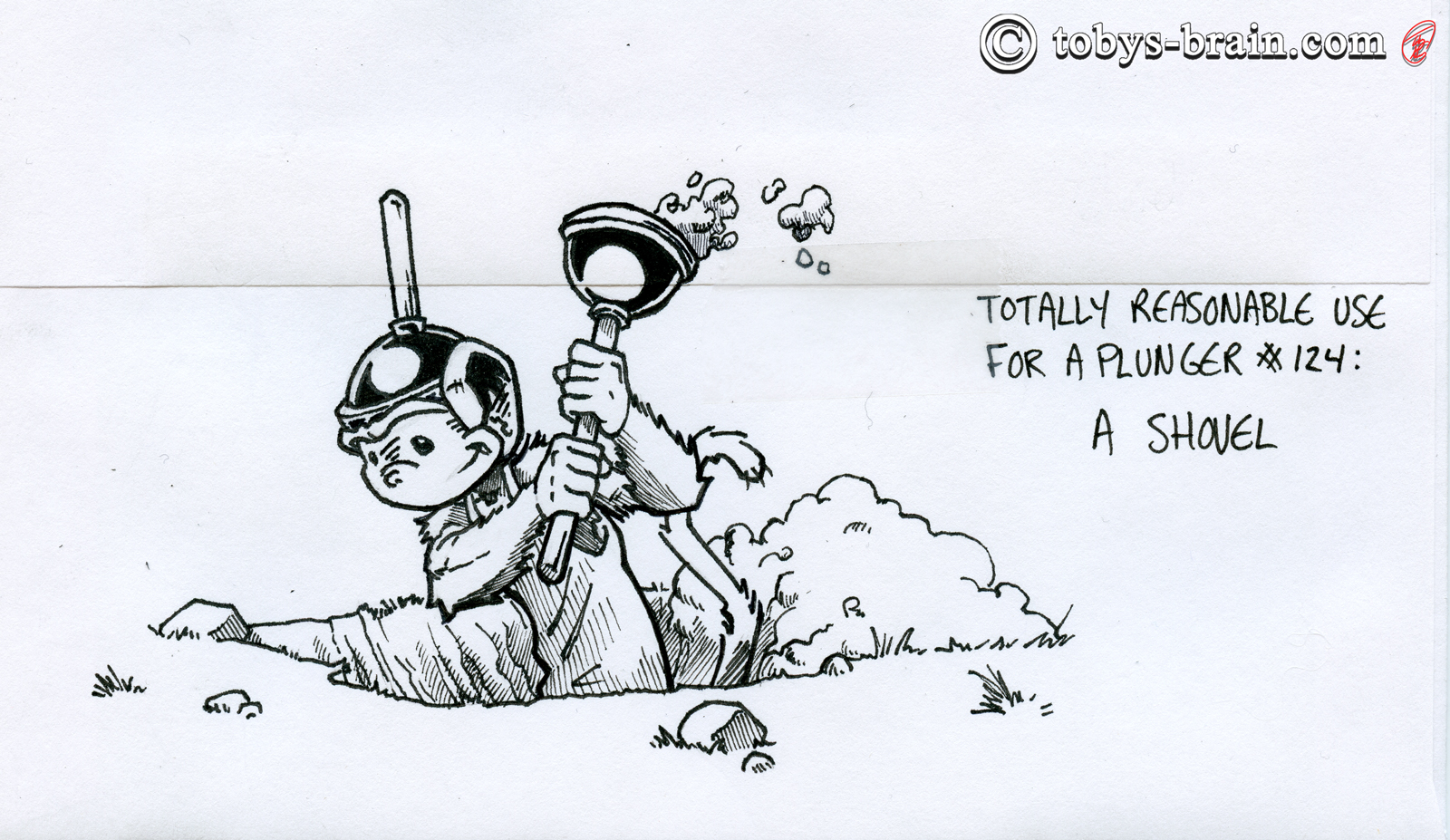 This image is an homage to a Calvin and Hobbes strip by one of my art heroes, Bill Watterson. I sent this to one of my best friends from high school, Pete, and his family. We grew up in neighboring towns, but shared a lot of common interests and hobbies and also a lot of academics due to us both being in the Honors Society. We both loved to read, we both liked nerdy things, ran cross country and track, and both became Eagle Scouts. In college, we both took up karate at different schools, but under the same organization. We used to carpool in to Boston together during summer break to train with Sensei Tabata. Pete used to work for the highway department then, shoveling, hammering, and just generally manual laboring. He’s no stranger to house renovations, either. I haven’t seen him in years, and I miss him, but I’m glad we’ve been able to stay in touch all these years. 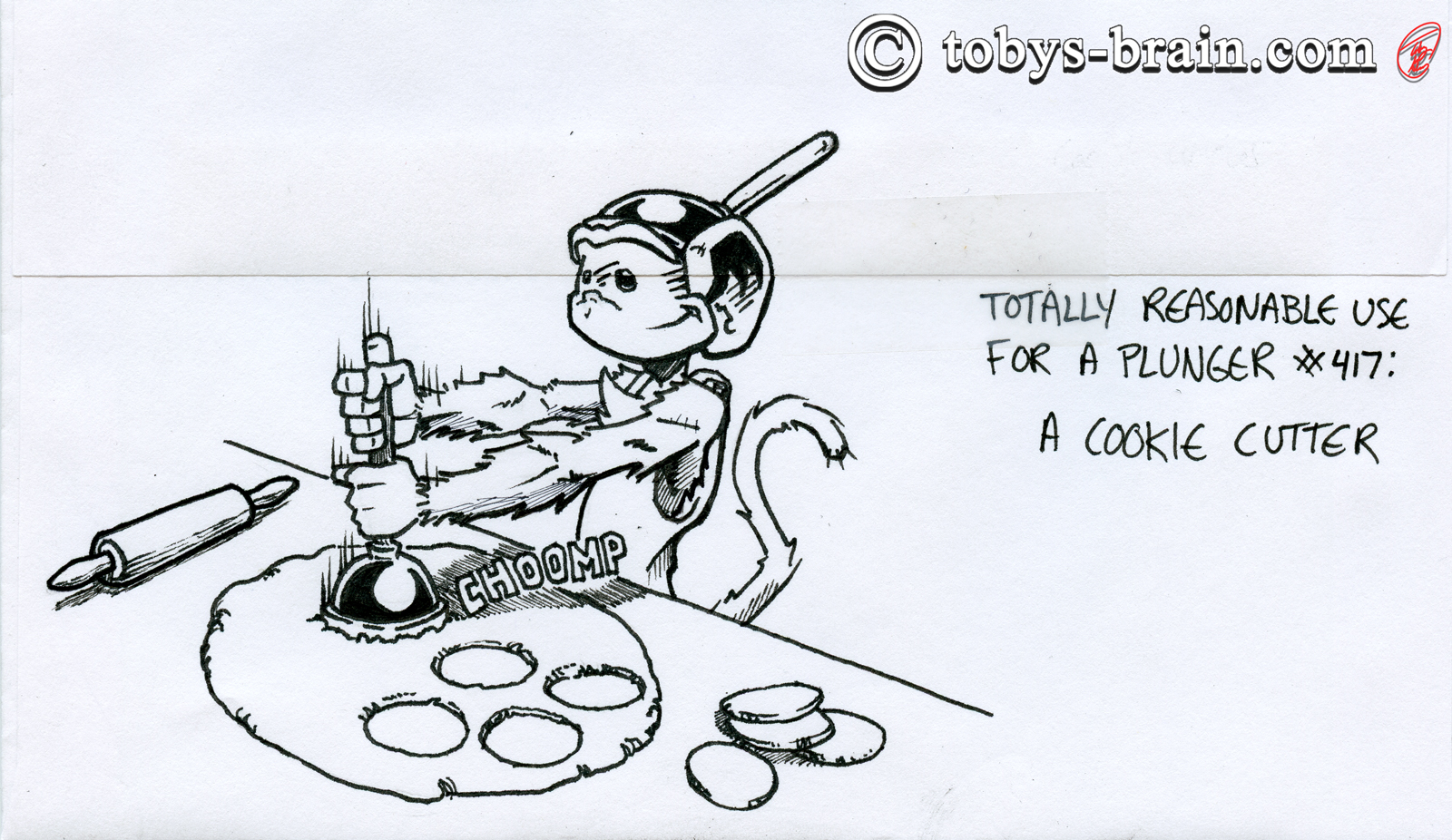 My dear friend from high school, Tracey, is a multi-talented woman. She’s a skilled jewelry maker, a great artist in general, likes to garden, and is pretty handy at home renovations. She also likes to cook and get her young son involved in the action, too. She’s another great friend I haven’t seen in many, many years, and maybe one day we’ll change that. Right now, I’m really hoping I didn’t give her son any ideas with this one…sorry in advance. 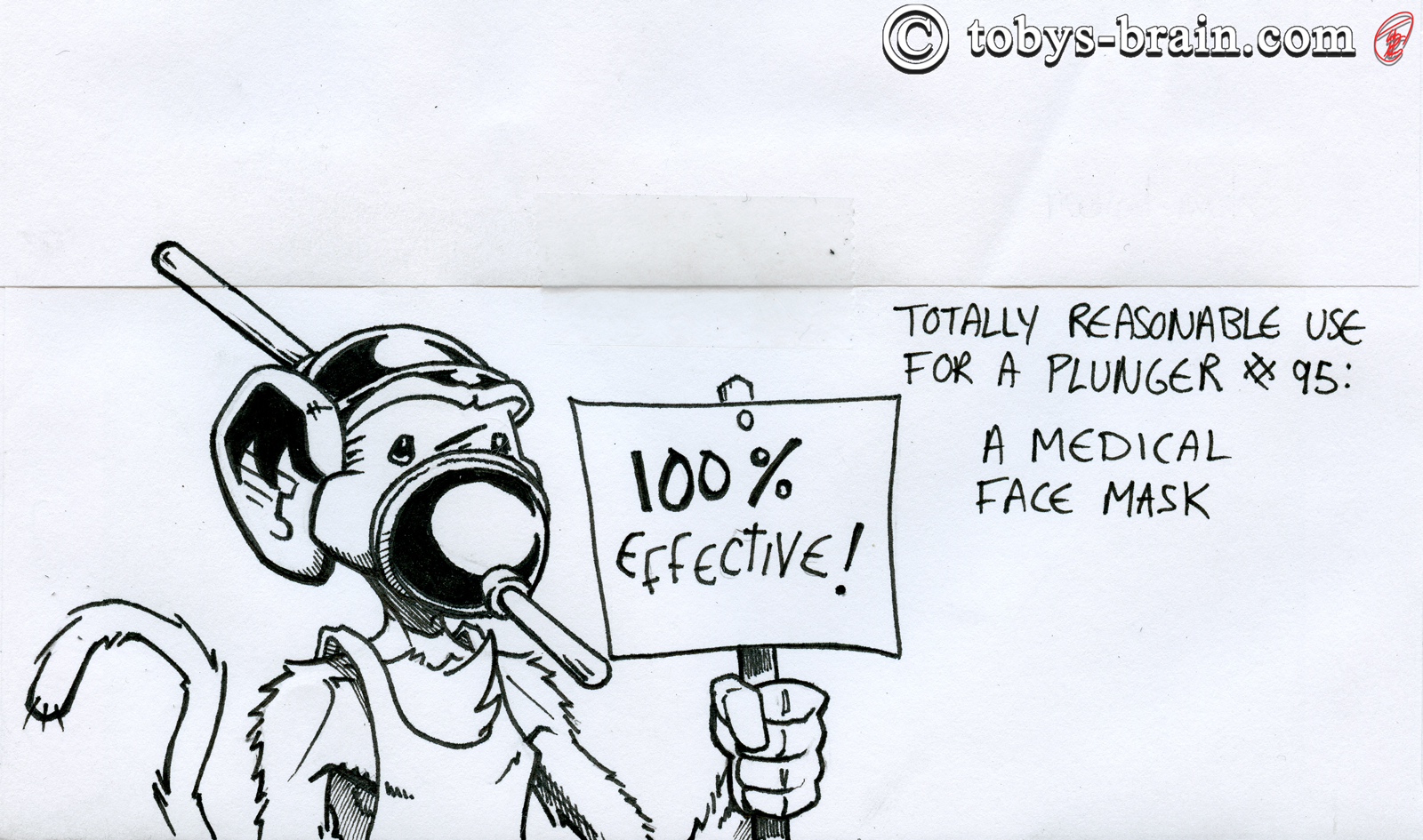 This one went to one of my best friends from college, Cat, and her wife Kim. Cat is an amazingly talented artist, and I always look forward to the card she sends us each year. Cat and Kim have become huge PMD fans and Cat even did some “fan art” and printed it on a blanket she sent me. Another example of friends we never get to see but we feel close and connected regardless. It’s no secret I’m an exercise junkie, so this image is appropriate in that regard. However, I sent this to my dear friend from college, Rebecca. We have exchanged xmas cards almost every year since college, though we mostly lost touch outside of that. I think last year my card got returned, as she apparently moved, but is notoriously bad about including her return address on her cards. This prompted me to do a little Face Book snooping to see if I could find her. In the process of reconnecting, I learned she had gotten into Crossfit, which is awesome. I remember having conversations with her about exercise and fitness back in college, and her lamenting finding something that she was motivated to do. I’m really happy she found that something, and I’m even happier to have caught up with her again. 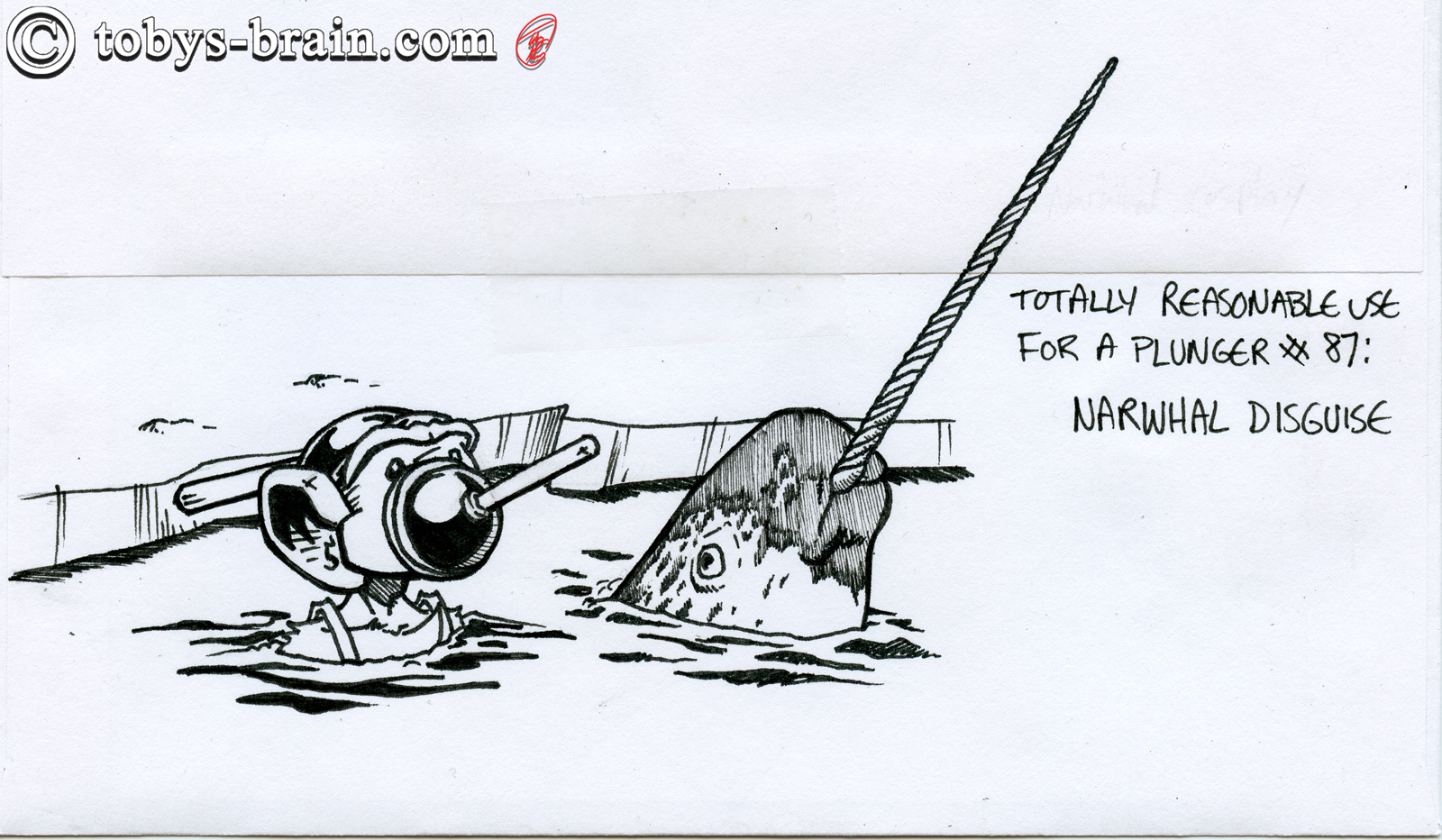 I find this one to be particularly hilarious, especially the concerned/quizzical look from the narwhal. This one went to my friend Hannah.

Another year of envelopes down. This started as a little, fun, kind of gag and has really evolved to something a bit more. I spend a lot of time thinking about and working on these, hopefully they brighten the days of those that get them. In an ideal world, I’d do one for everyone I send a card to, but I just don’t have that ability, so I keep it limited to close family and close friends.

This marks 3 weeks in a row of new posts. I’m not sure what’s up with that. I know it won’t continue, but I do know I have at least one more post planned for next week.

Oh, yeah. Can’t end this and forget about my teaser…