Look! A consistent posting pattern! How long will it last?

I can’t answer that, so enjoy it while it lasts.

In case the title wasn’t obvious enough, I’ve decided Friday is going to be New Shirt Friday. At least until I make it through the various new shirt ideas I’ve got. This week’s offering targets a particular nitch. Well, I guess you could say all my shirts target specific nitches of one kind or another (like fans of monkeys with plungers on their heads. That’s pretty specific). I am a self-proclaimed metal head. I’m not a die-hard concert goer (because people. I’ve gone to see a small handful of bands that were worth being in a crowd, though, like Megadeth and Judas Priest), but I love heavy metal music and most of it’s various sub-genres. I like the energy of the music, it makes me want to get up and move. It’s a safe format for venting anger and frustration (as is most art), not that I’m a terribly angry and frustrated individual.

Heavy metal was the first music I started listening to on my own that wasn’t Weird Al. Back in 1991, as I was starting my freshman year of high school, I was feeling a bit desperate to make a change and fit in better (that didn’t last long). I wanted to escape all the previous years of bullying and blend in. So, I decided I’d start watching MTV, because that’s what cool kids did. One morning, as I was waiting for the bus, I sat down, turned on MTV and was immediately entranced by the opening riff and strobe light visuals of Metalica’s Enter Sandman video. Shortly after that, I experienced Megadeth’s Sweatin’ Bullets and that was that. I was a heavy metal fan. I can’t say it improved my life, but it did give me a connection to some peers that I hadn’t had before, and I loved the way the music made me feel. It was somewhat empowering, in a positive way.

Of course, in hindsight, my love for heavy metal has a much nerdier origin: the soundtrack to 1985’s animated Transformers the Movie (the only one of that name worth watching). If you were a kid during that time frame and you were at all interested in the robots in disguise, you likely saw, loved, and cried during that movie. The soundtrack was heavy metal, and I played that cassette tape (remember those?) endlessly. I could probably still sing (poorly) every song on that tape. And yes, Weird Al’s Dare to be Stupid was one of my favorite tracks.

So, for all the other metal fans out there, regardless of how you got into the music, here’s my shirt for you:

I like heavy metal. This image popped into my head. Now it’s a shirt. Because reasons.

The kids are on vacation next week, so it will be challenging to get the next shirt done and available, but I’m going to do my best. In the meantime, here’s a couple of moleskin sketches. One is from a month ago, the other from earlier this week. Enjoy, throw your horns in the air, bang your head to some good music, and stay tuned. 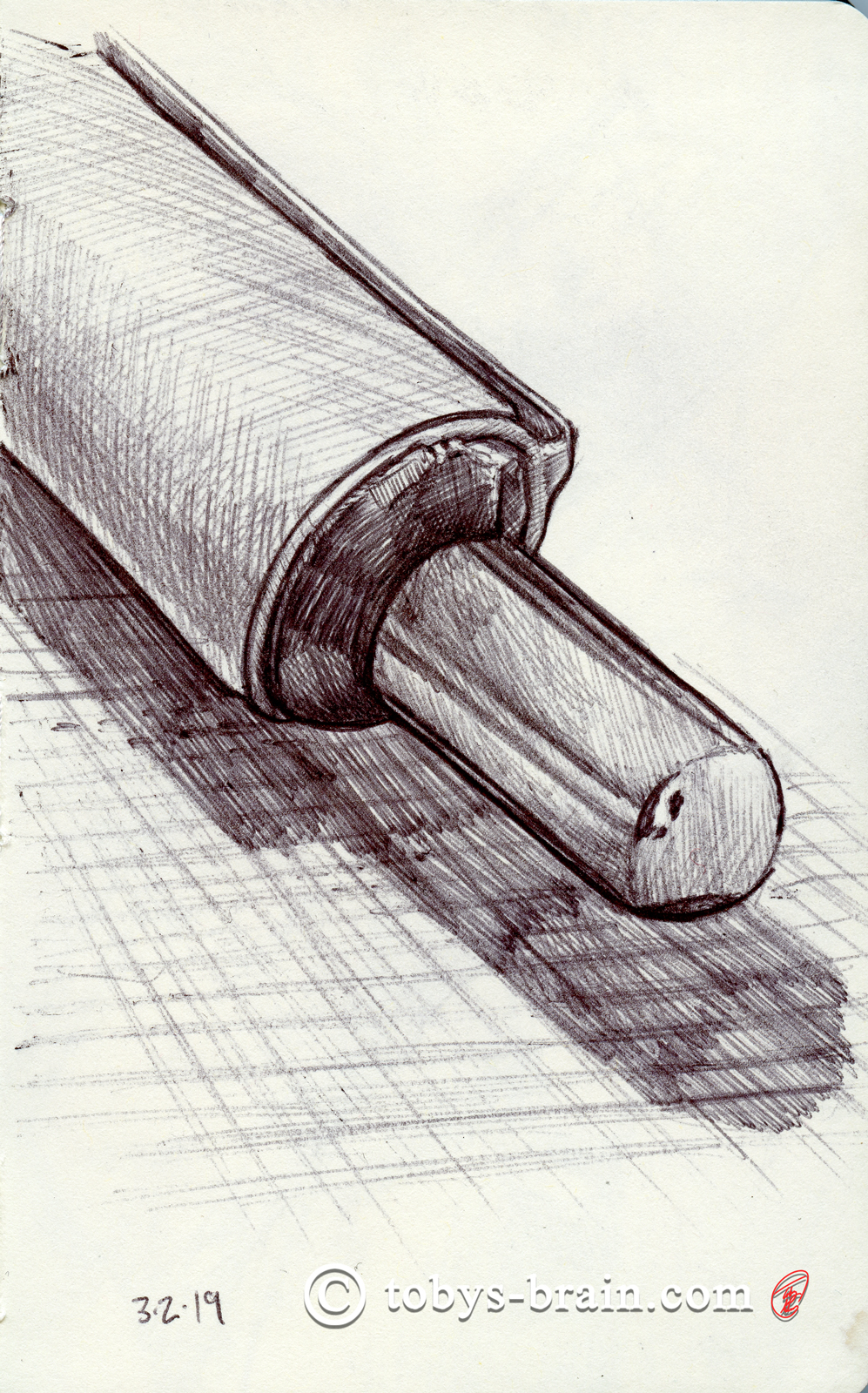 Moleskin sketch done sitting in a Dunkin’ Donuts, waiting for my oldest son to meet with a merit badge councilor. 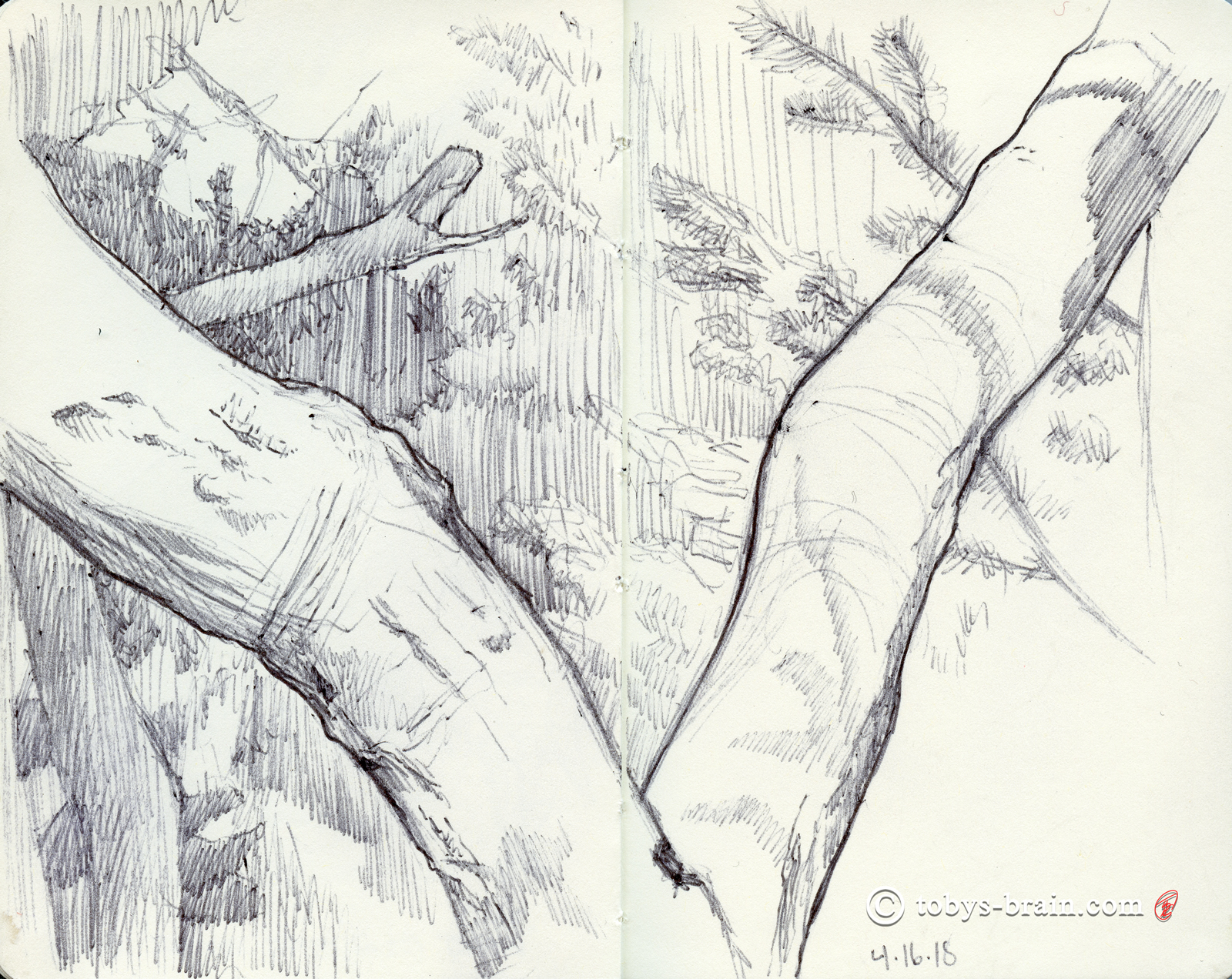 I drew this forked tree on the top of North Pac mountain, while hiking with my middle son’s class.