I’m pretty proud of that title…cuz, like Bruce Lee…Enter the Dragon was a Bruce Lee movie…my wife’s name is Lee…I’m a big Bruce Lee fan…I’m a big fan of my wife…it’s allllll connected.

Anyway, it’s September, so that means it’s time once again for another annual tradition I started (this being the fourth year): drawing a dragon for my dragon-loving wife for her birthday. I do these in Procreate on my iPad Pro to take advantage of the time lapse feature, but the fact that I use it so infrequently leads to problems for me. I have to relearn how to perform certain functions that affect the overall work flow, which limits what I can accomplish. If you want to see that time lapse, go here. 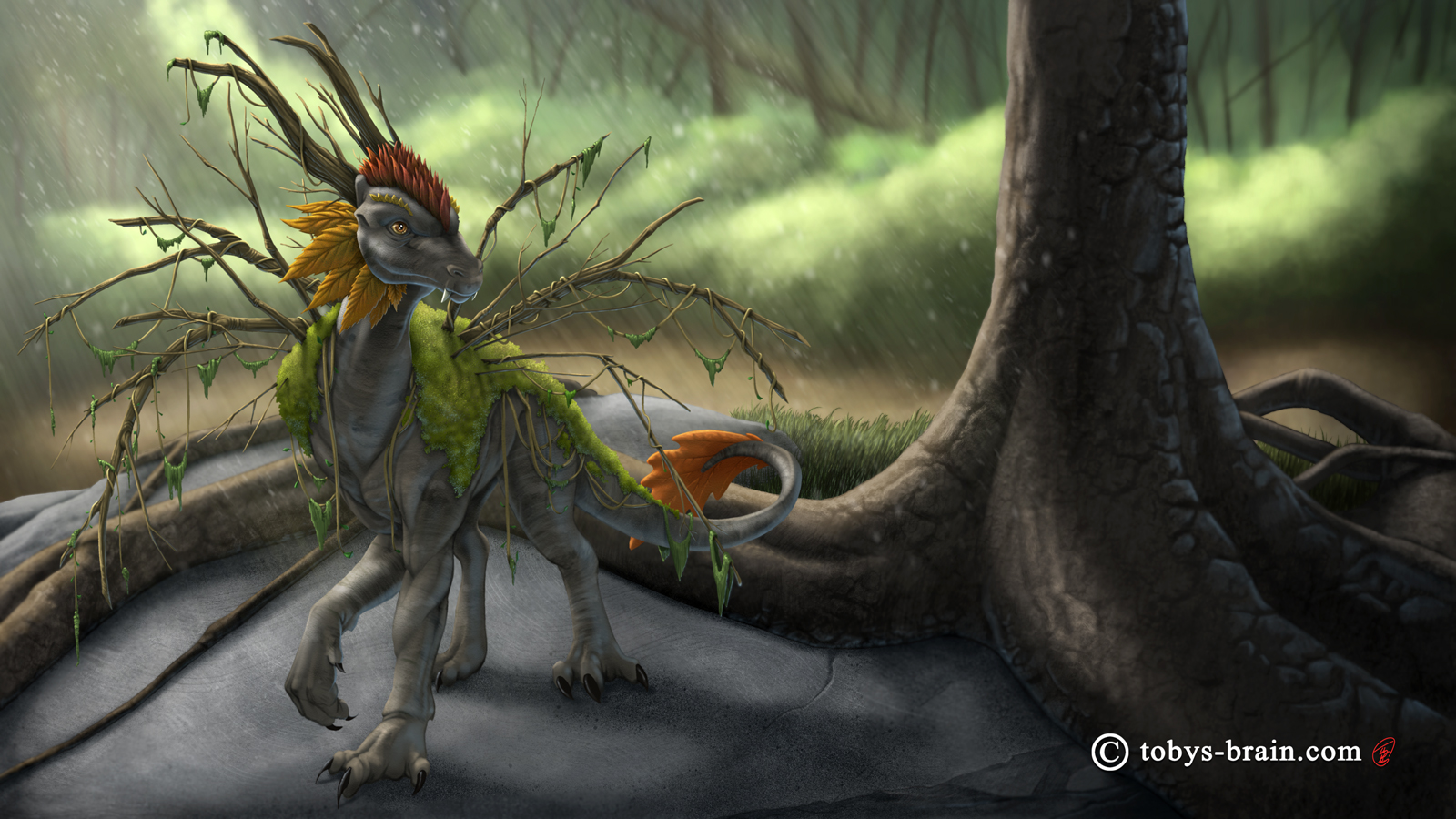 The annual dragon for my wife’s birthday, which gets set as her work desktop wallpaper and as of last year gets printed onto a shirt. This one was a roller coaster for me. It took me a while to come up with an idea. I generally knew I wanted to have each dragon represent a different element or ecological niche, and I was thinking “forest dragon” for this year, but the specifics took a while to come together. I had moments of being really happy with the design and my execution, and just as many moments of absolutely hating what my hands were producing. I’m somewhat used to feeling like that, but this one felt more extreme for some reason. I ran into some challenges with using Procreate, mostly I didn’t have access to the same brushes and textures I’ve created in Photoshop and I ran into a layer limit multiple times (which meant I had to copy the whole document and merge layers, since I’m OCD about being able to go back and make alterations). I used my copy of Science of Creature Design by Terryl Whitlatch to help figure out some of the anatomy, though it’s still pretty wonky. I originally thought about covering it’s back with ferns and it’s skin with lichen, but I couldn’t come up with a sane way to do that in Procreate. I already pumped 35+ hours into this (don’t get me wrong, my wife is worth more than that) and I was just running into my limitations as an artist.
The rock and tree part of the background comes from a picture I took of a family hike earlier this year (2019). While dreaming up this creature, I haven’t decided if the moss and branches are a part of it or if it decorates itself for camouflage. I think the leafy bits are part of it, at least.

Since it’s me, I got noodley with the details that you can’t even tell are there. So here’s some zooms. 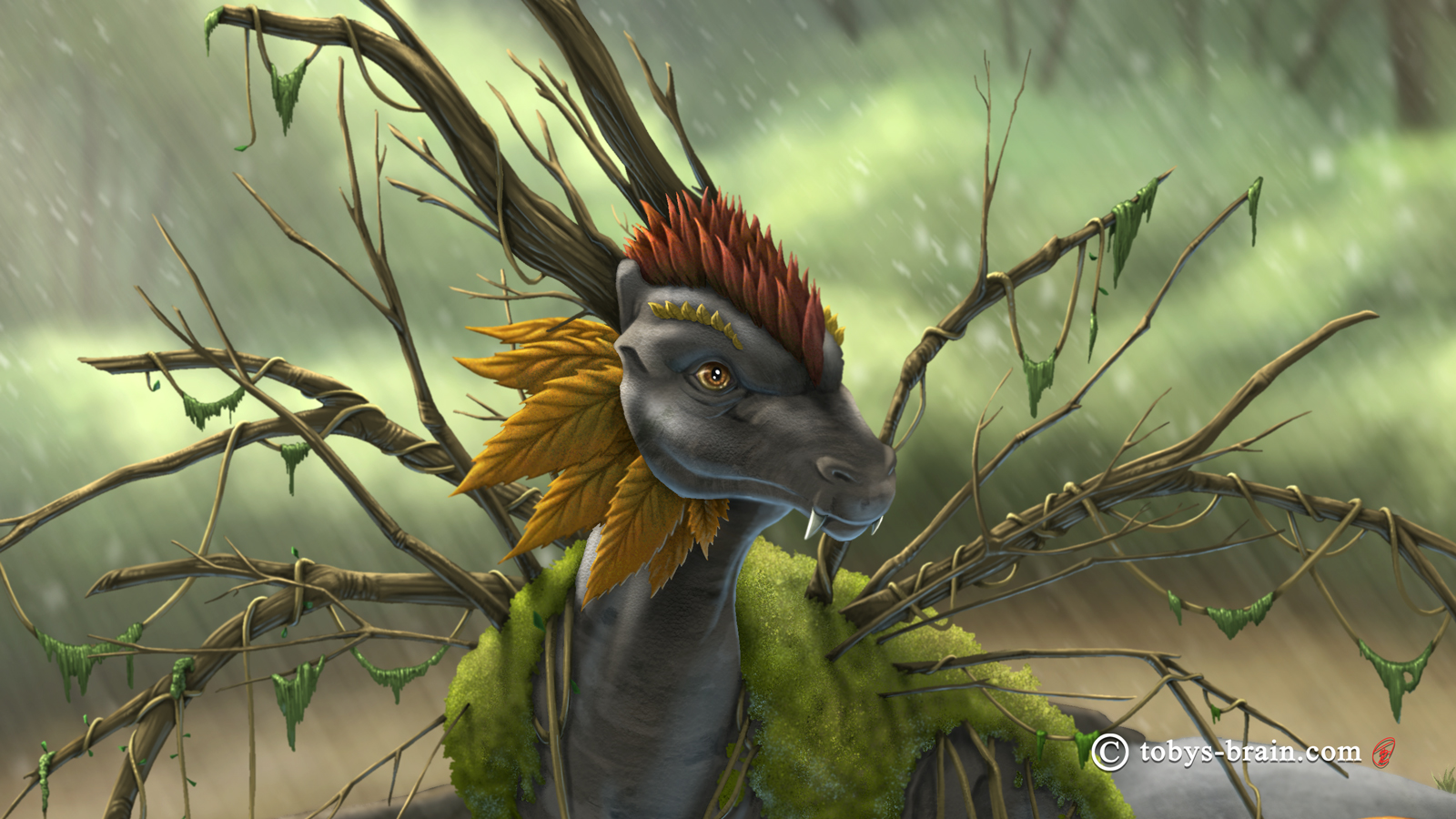 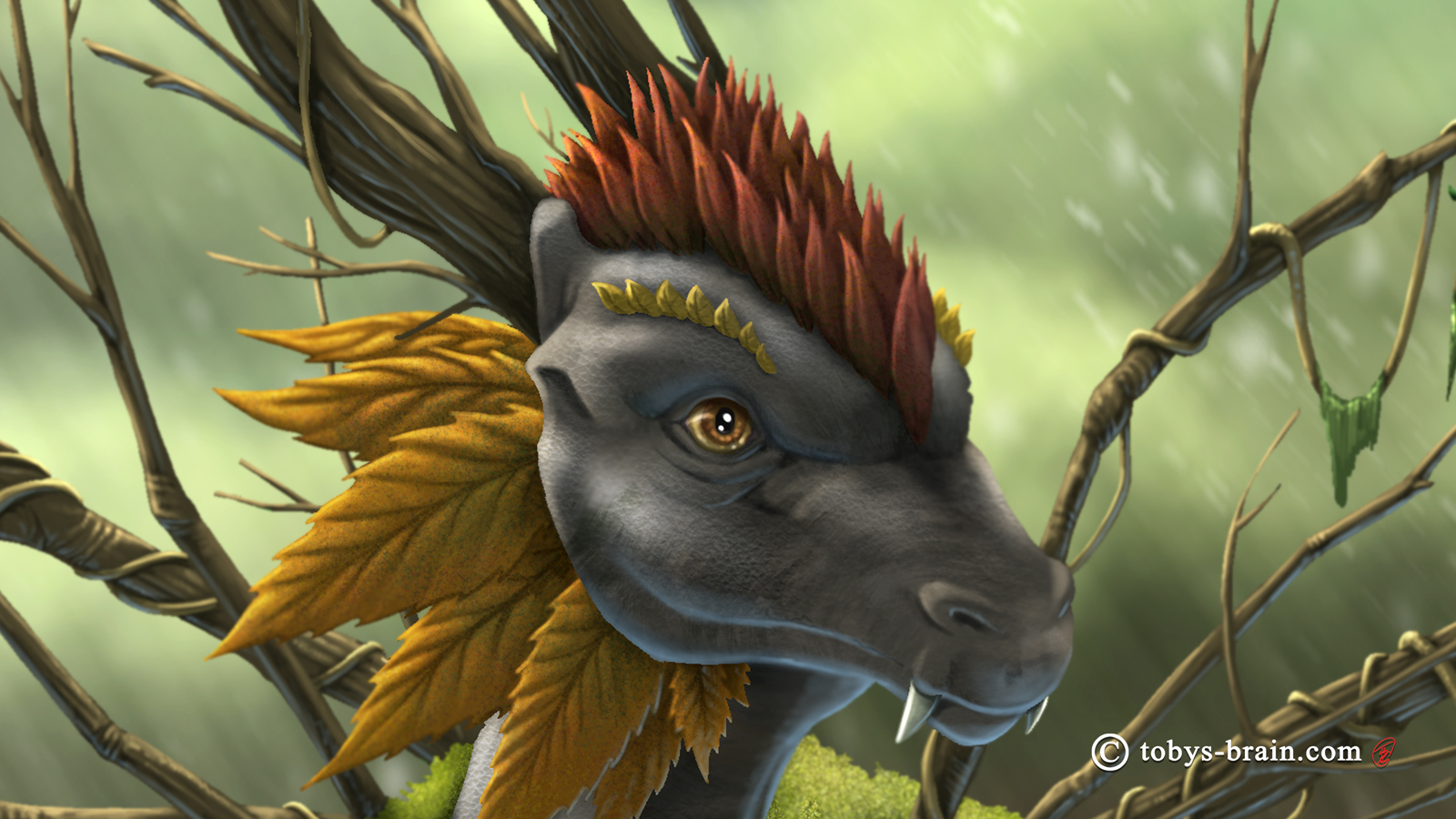 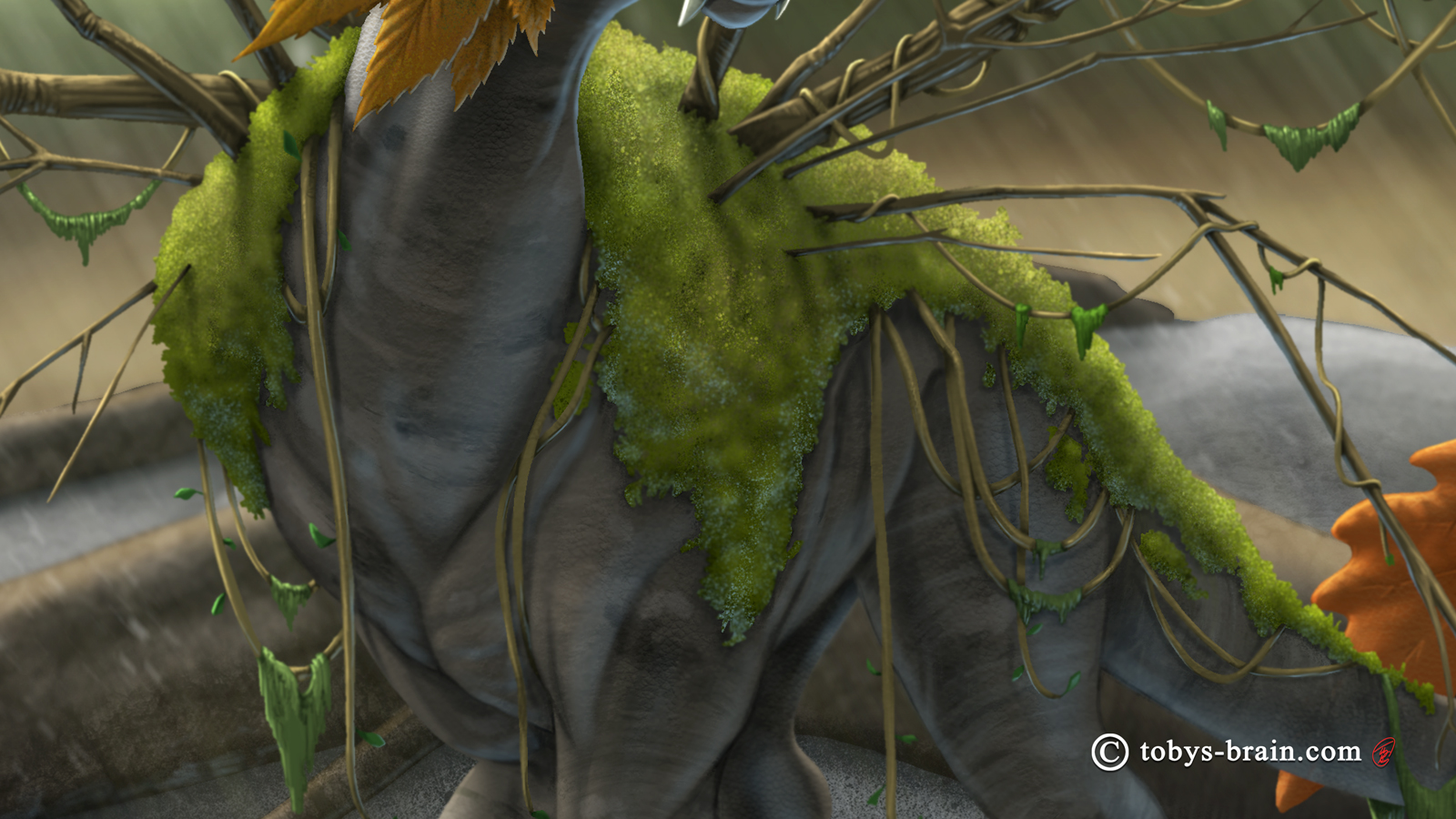 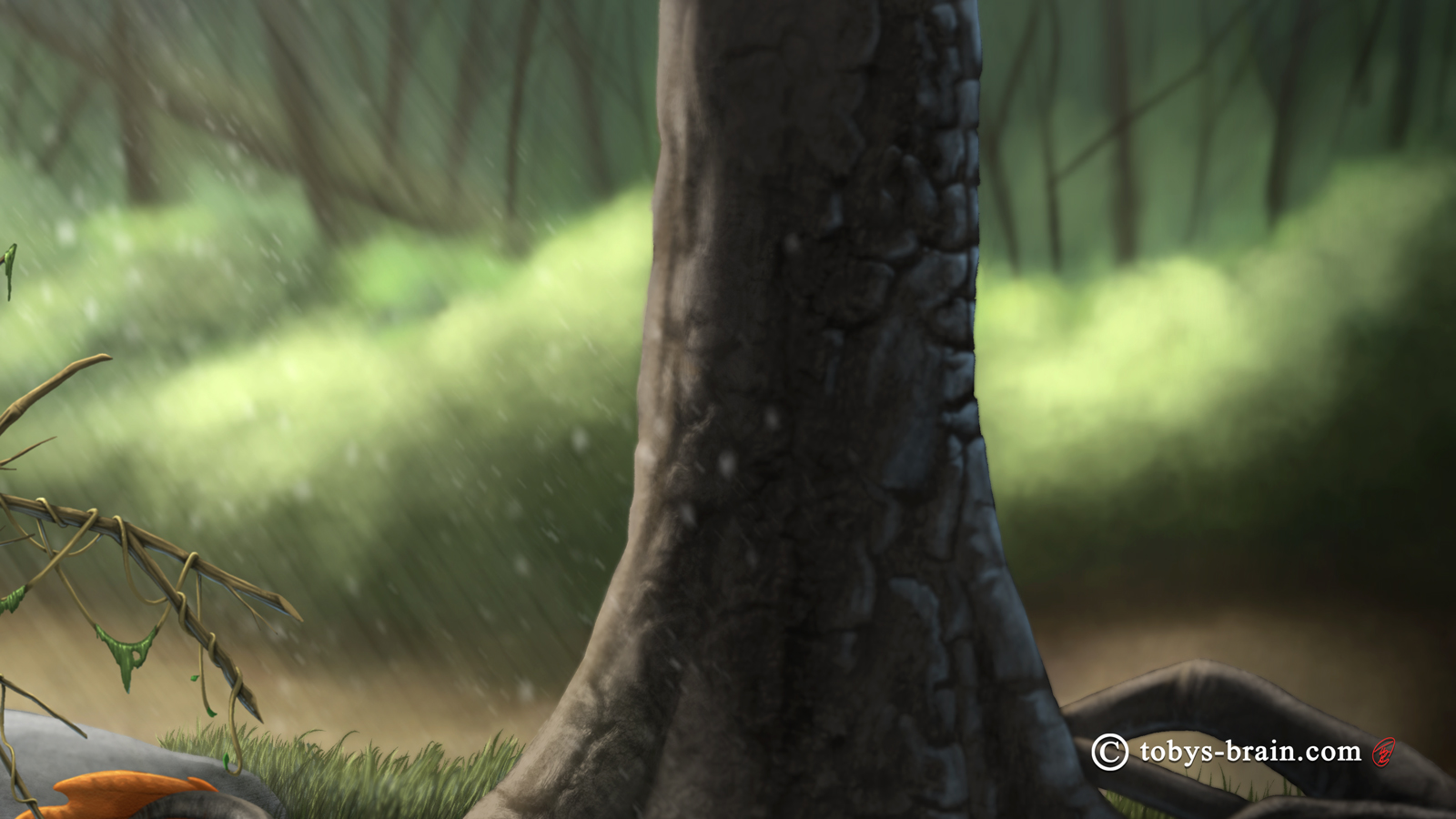 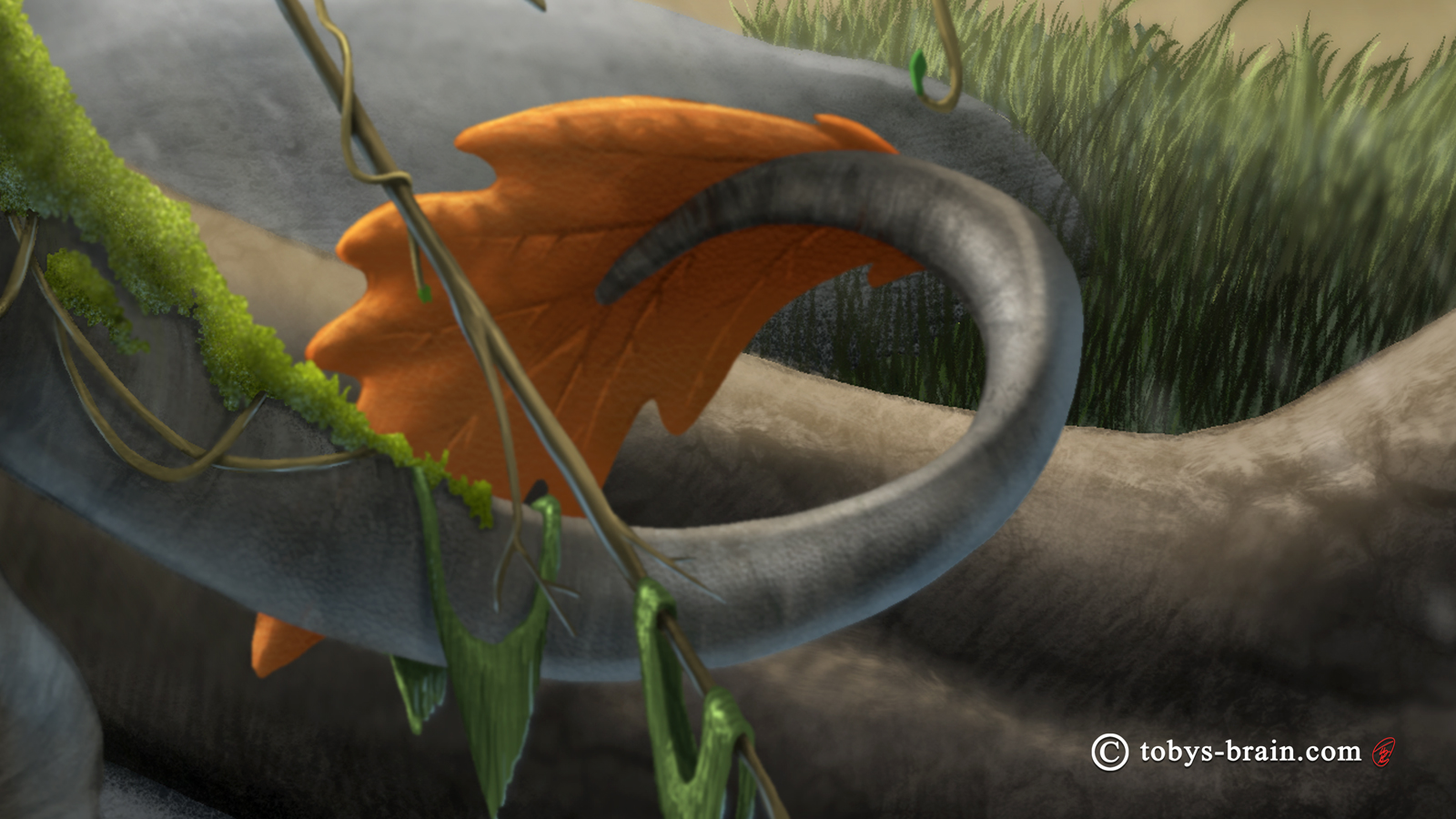 So, like I said, I struggled with this one. I just have to remind myself that’s it’s all part of the growth process and I just need to keep marching forward. It’s hard, though, when you really want to produce something you can be proud of, but you can’t see past the flaws. It becomes even more of a head trip because creating is such a personal act, it’s hard for those feelings not to spill over and affect confidence, identity, and self-worth. There’s a reason depression, substance abuse, and sadly suicide, are so common for artists of all types. But, there’s always another song, another painting, another performance, and another day to look forward to.