Gallery Update: Look! Up in the sky! It’s…whales?!

Gallery Update: Look! Up in the sky! It’s…whales?!

Some back pain flare ups and my eternal struggle with getting computers to like me kept me from making this post last week, so the regularly scheduled Monday Studio Stuff post will happen some other time, hopefully this week. But for now, a little blast from my past… 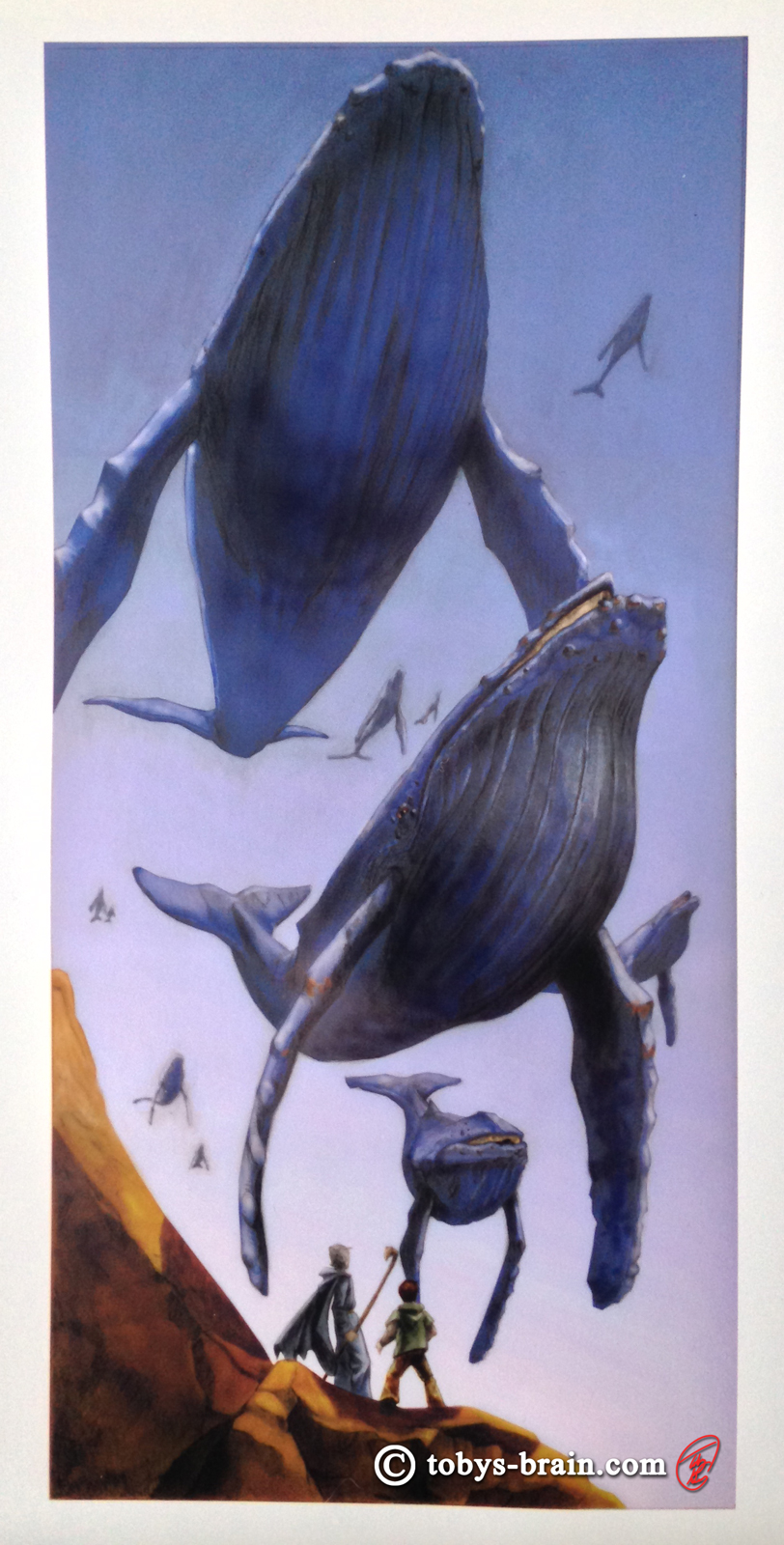 Look, flying whales! Nobody’s ever drawn THAT before…

First off, after a little digging, I’ve discovered this photo is the only copy I have of this image in color. This was another example of my early dabbling with incorporating digital into my workflow by scanning a pencil image and attempting to paint (with a mouse) in Photoshop. I can’t seem to find the color file anywhere, I appear to have only 2 color print outs on a generic photo paper tucked in my portfolio.

I did find a scan of the original pencil drawing, at least.

This “scene” was one of the first images that popped into my brain shortly after the story of “Wilhelm” started taking shape. The humans are two of the main characters with really silly names and they are witnessing a pod of flying whales feeding (just before the whales are attacked by some other humans while the heroes appear helpless to intervene). The beginnings of “Wilhelm” came to me as I sat in a summer session Marine Biology course in 1998. We had been talking about evolution (a favorite topic of mine, I find it incredibly fascinating and a source of many ideas) and the distant relationship between whales, seals, walruses and the like to their terrestrial predecessors. I drew a land lubber version of a walrus (dubbed “Mr. Walrus, who shows up in a few other drawings from this time frame) on my notebook and the wheels started spinning. Not long after that, the scene with the flying whales grabbed my brain and shook it so violently that I had to pause at my job and jot down notes and doodles over the next several hours while I worked (I was working during the summers and vacations at a book bindery, at this particular time I was in charge of making the waste leaves, the pretty colored pages at the front and back of books that help attach the pages to the covers. I was down the road from the main operation, in a semi-condemned building, all by myself with no company other than two 7 foot tall stacks of cardboard covers, a forest’s worth of paper, various tools of the trade, and lots of lost and partially finished jobs). It wasn’t until sometime between 2002 and 2004 that I finally sat down and attempted to capture the scene in this concept illustration.

As I’ve mentioned before, this particular story has grown and evolved tremendously over the years, but it’s still not at a point for me to sit down and put it all together. Now that my digital skills are a little sharper, I plan to return to this image. At first I thought I’d just paint over the drawing, as I had before but now with the precision of a stylus, but there’s so much about this image that just doesn’t sit right with me anymore. So, at some point, I’ll completely rework this image, hopefully with a better result.