I was flipping through an old, hardly used sketch book yesterday and stumbled upon some drawings from 2009ish that I really liked (well, as much as I ever like any of my own art, I tend to be very self-critical). This featured image here is a Crab Raccoon…if you couldn’t tell. My friend Jorj had mentioned that one of his daughters always mispronounced “crab rangoons” as “crab raccoons”, so we decided we had to draw it. This was my vision of such a critter. It was relatively quick, but lots of fun at the time as this was towards the end of my “artistic dreams on the back burner” period of life (before the kids were all in school and I could finally sneak in some studio time without too much guilt). I was playing around with some Micron pens, both the brush and ultra fine tips, as well as some Prismacolor greyscale markers. 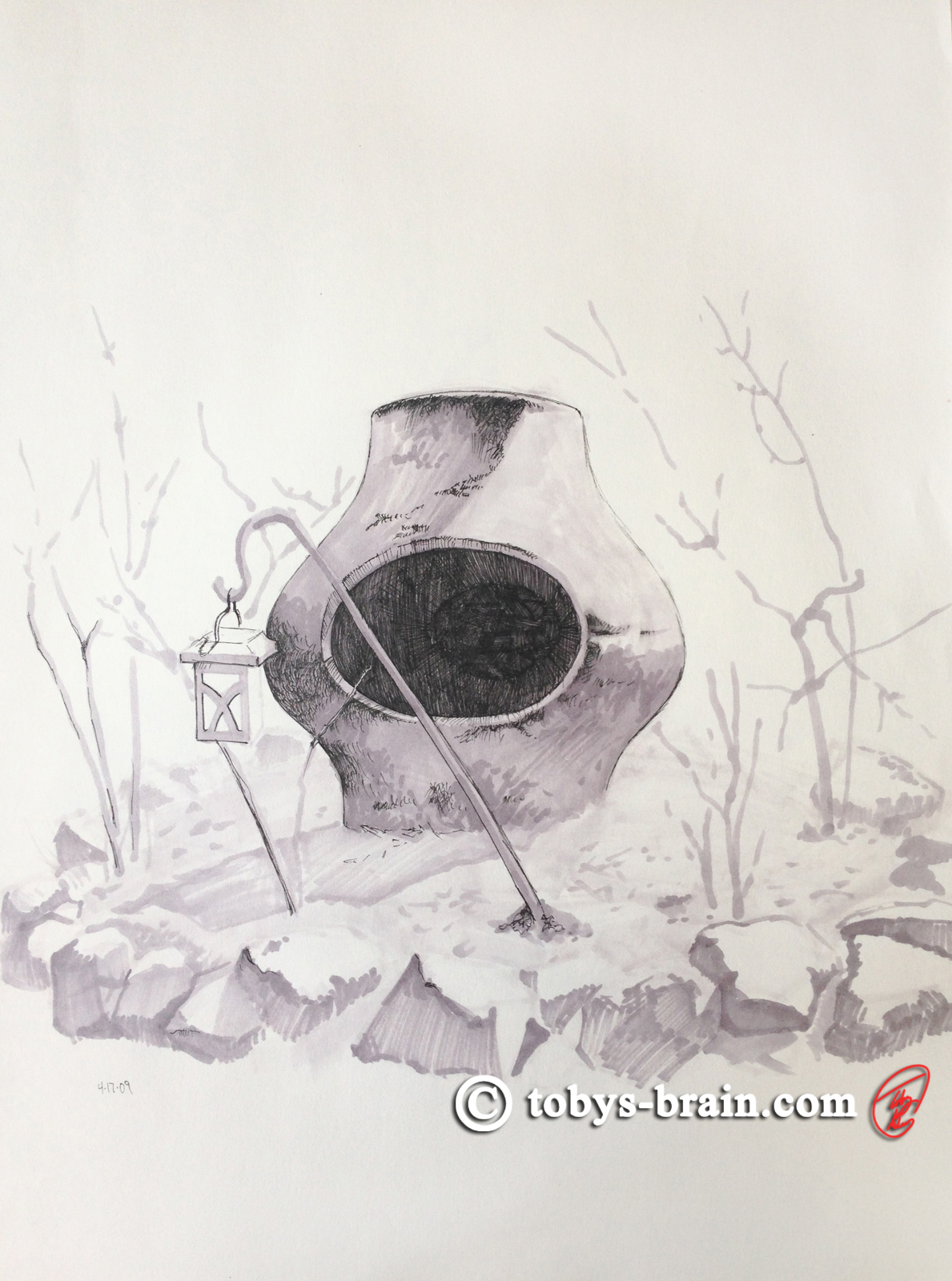 Observational drawing of a chimney thingy and some lilacs in our front yard.

I’m much more comfortable with a pencil, probably because I can erase it (and I’ve been using one longer), but I’ve always loved pen and ink and wash artwork and I wanted to try to get better at it. I was inspired by two artists (who I will probably feature in an Inspirations post at some point): Osamu Tezuka and Doug Chiang. Doug Chiang was one of the lead concept artists on the Star Wars prequels, and I fell in love with his greyscale and pen concept drawings in The Art of Star Wars books. I also picked up his graphic novel Robota, which was pretty cool, too. 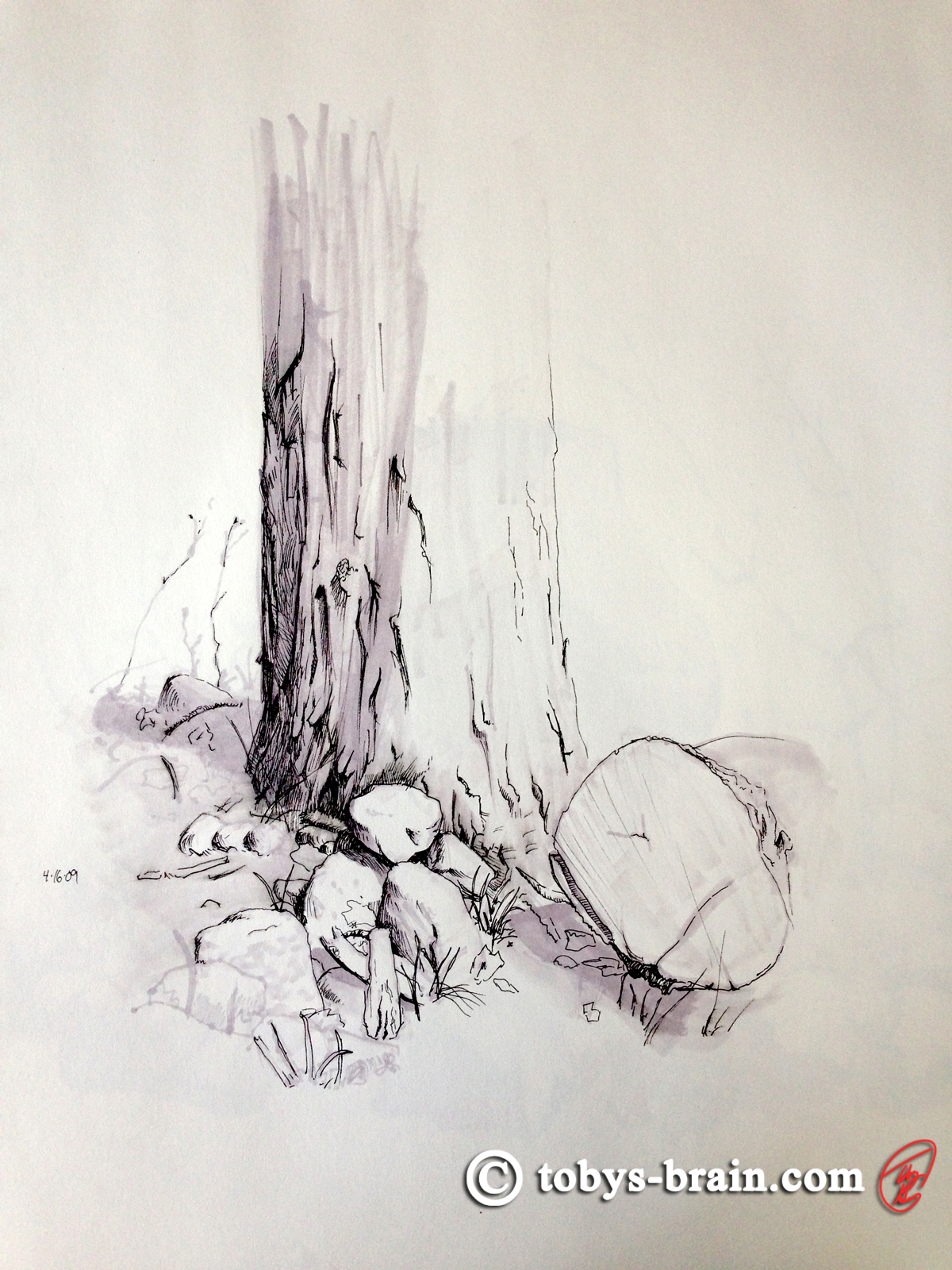 This was a nature study of a maple tree right next to our house. Over the previous winter we had a nasty ice storm (left us without power for 2 weeks, school was closed for at least a week prior to Xmas vacation), causing one very large limb to snap off like a twig. Thankfully this one was not on the house side, but we have had a few land on the house, though fortunately none as big as this one was.

I was fascinated by the use of markers in set greyscale increments (10%, 30%, 80%, etc) and the notion you could start with a light marker, almost like a light pencil sketch, and layer darker tones on top. It was a very approachable method for me to work with ink and not freak out about making mistakes. All of the light, sketchy remnants add something to the finished drawing, as well (at least it does in Chiang’s work, I won’t say that about mine). 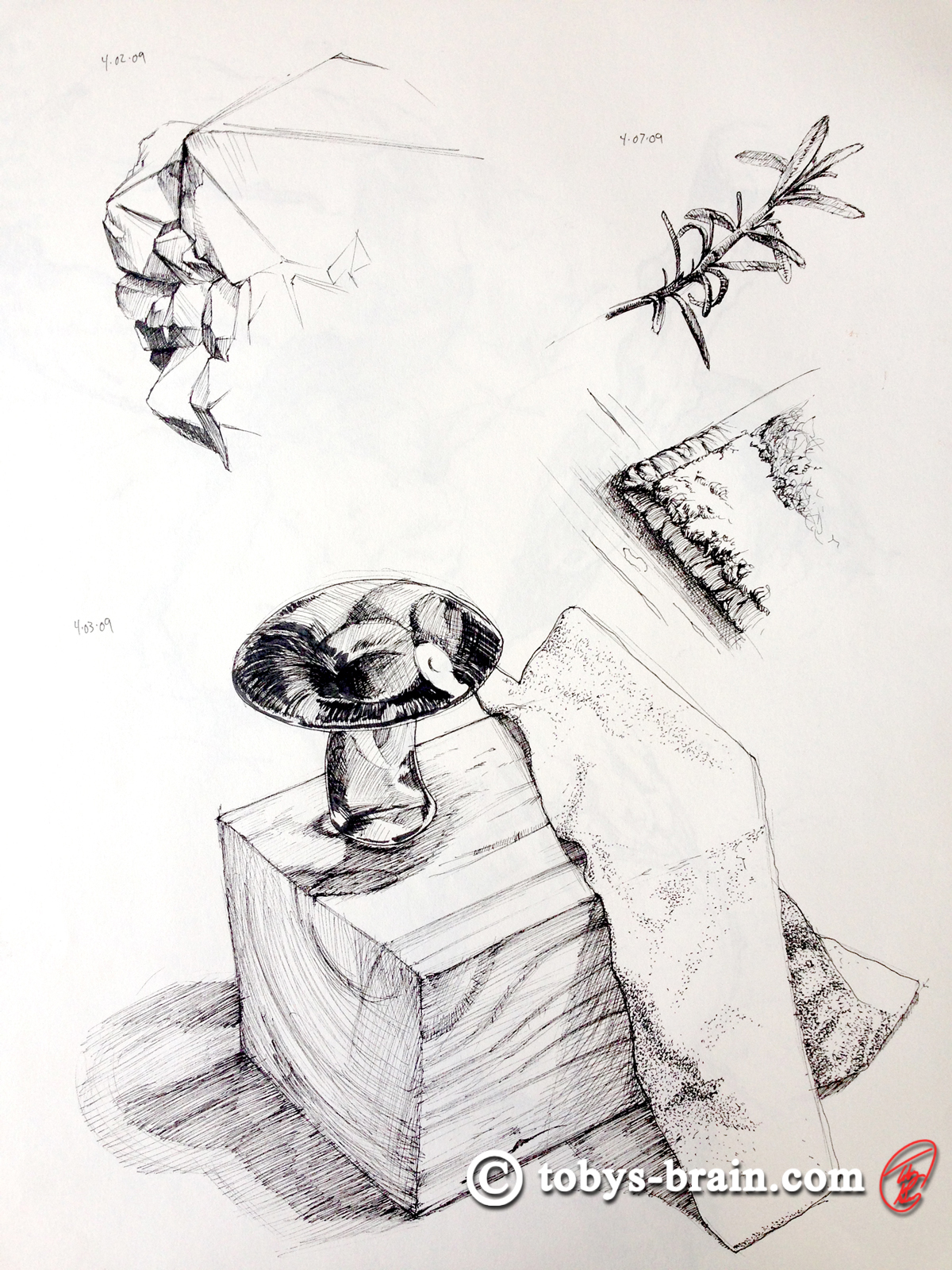 As I’ve gotten older, I’ve grown more enamored with how a good comic book inker or pen and ink artist can create such depth, sense of light, and particularly texture, all with intelligently placed black lines and marks. It was around 2009 when I finally got my hands on some classic manga by highly influential artist Osamu Tezuka. It’s a name that’s not as familiar in the states, but in Japan, he’s Walt Disney. He is the father of manga, both in terms of format and subject. In the west, we have a preponderance of super hero comic books. At one point, there was a horror genre, some westerns, and maybe a few others. In Japan, there is a manga genre for EVERYTHING. Big robots, samurai, horror, school girls, baseball, romance, science fiction, drama, comedy, history, fantasy…you name it, there’s manga for it. Thankfully that trend is happening more and more in the states, but Tezuka lead the way in Japan. If you would recognize any of his work, it would likely be Astro Boy, but the works I read and was so moved by were Phoenix and Buddha. I don’t know if I can put to words how brilliant these works are, maybe I’ll try in another post at some point, but I was particularly moved at the time by some of the textures he was drawing. Manga artists in general are masters with pen and ink, in my opinion, but Tezuka especially so. 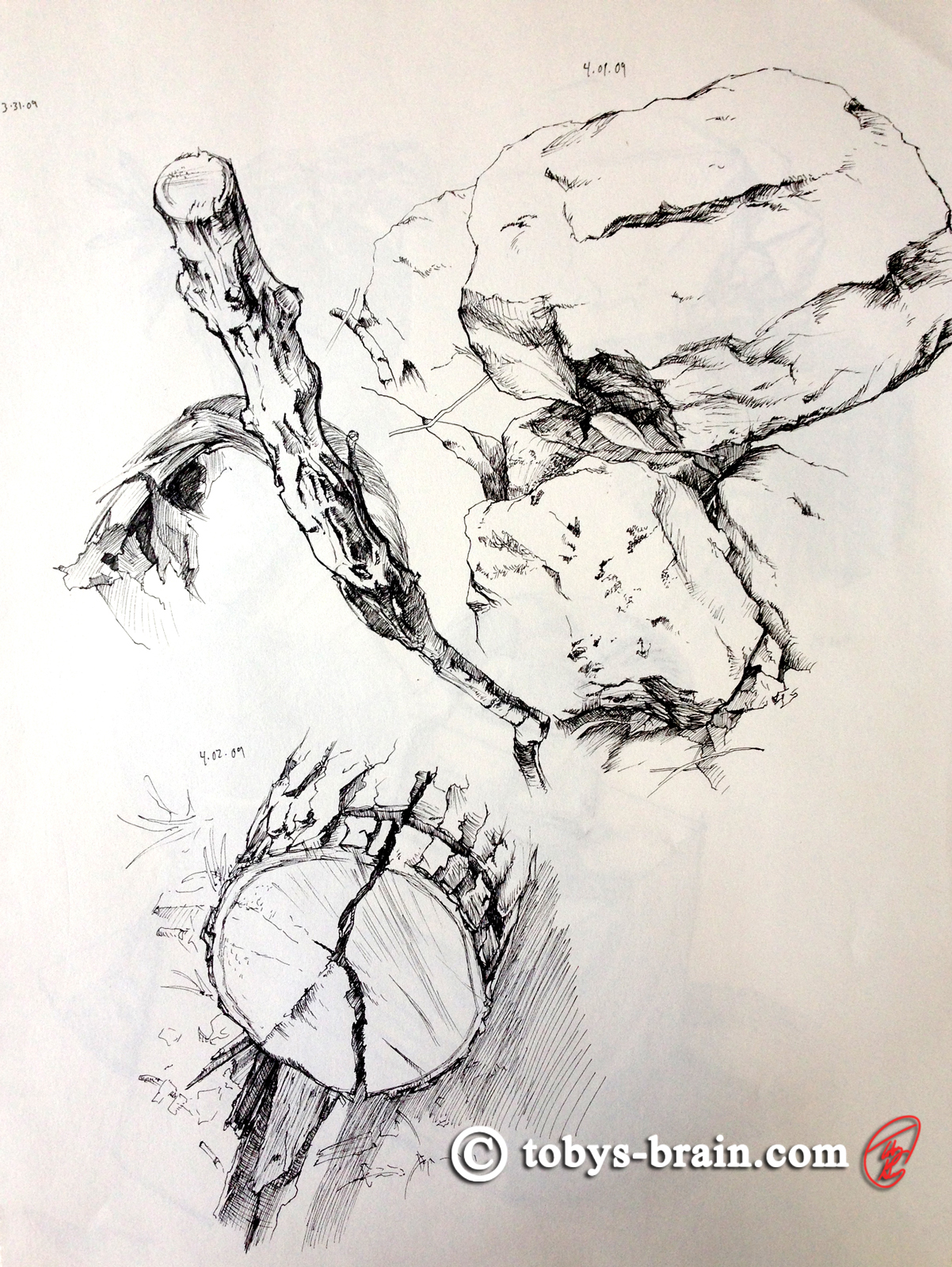 After oogling some of his textures, I was inspired to break out my pens and see if I could try to capture all the textures I saw around me. I can’t say I’m particularly great at it, but it was a ton of fun and something I ought to be doing more of. After stumbling across all these old drawings, I think once I finish up with a few more digital pieces I need to finish, I’ll try to spend more time with an actual sketchbook and implements (pencil, pens, markers…), it would be nice to do some observational drawing outside again. It really ought to be a habit, I just need more hours in a day!