A NEW Awesome Shirt of Awesomeness for Awesome People!

A NEW Awesome Shirt of Awesomeness for Awesome People!

Another week, another shirt! But first, some other stuff…

I was a bit ahead of the game last week, having managed to stick to tweaking and uploading a new shirt and having completed multiple IPMDT panels a day for several days, so I decided to get distracted with another project: my ultimate survival wool blanket coat. I have always thought it would be cool to make my own clothes, and not just putting my art on shirts. I remember thinking how cool it was that my memere was a seamstress and she would either alter clothes or flat out make outfits for her kids. The older I get, the more I feel like clothing doesn’t suit me…that doesn’t sound right. What I mean to say is that my fashion sensibilities and desire for customized clothing that meets my needs from a functional standpoint don’t get fulfilled with what I can purchase. I actually spend a decent amount of time day dreaming about various bits of clothes that are functional for the things I need them to do, as well as bags/backpacks/slingbags/etc. I’ve been watching YouTube tutorials of folks making their own gear, and I’ve been particularly focused on (meaning geeking out about) making my own EDC gear (that’s Every Day Carry-meaning everything from phone, wallet, keys to your Boy Scout 10 Essentials, art supplies, and more), tents/bivvies, and wool blanket coats. Wool is a really amazing material, especially if you like to spend time doing stuff in the outdoors. 100% wool is fire retardant, really warm even when wet, it can wick moisture away from your body, and it’s pretty durable among many other things. Go look up uses for a simple wool blanket, there are tons if you’re an outdoor nerd.

Anywhat, I had planned out a Super Coat to make from wool blankets I’ve been picking up at thrift stores. Last week I finally decided it was time to start working on it before winter was over (and wouldn’t you know it, we had a 16″+ snow storm last week, and we’re in the middle of another right now. You’re welcome). My multi-talented and awesome wife gave me a sewing machine refresher (I haven’t touched one since Home Ec in…6th grade? Something like that?) and I got to work. It was coming together better than I was expecting, I was making lots of design changes on the fly, and I was really enjoying it. I was FINALLY making something that I had previously relegated to pipe dream status! Then, I broke the sewing machine. I was asking too much of it, working with thick layers of wool. I ended up going out to a shop (after many hours trying to fix the sewing machine) and purchased a new old machine. It’s a solid steel beast from the 60s, much cheaper and much more reliable than the computer driven modern machines. Unfortunately, I couldn’t take it home that day, as the shop needed to service it first, and with the storm pounding down around us, it’s likely going to be several more days before I can finish my Super Coat. Rest assured, when it’s done, I will blog about it. I’ve even taken some process video along the way to throw onto YouTube to get lost in the sea of bushcraft and prepper videos there. With any luck, it will get a few views that might direct people back to here.

Alright, enough digression. Did you notice the new logo thingy? It’s been awhile since I’ve made a new one. There’s actually 3 variants (currently. There’s bound to be more…). Anystuff, this post is supposed to be about the newest shirt added to the Plunger Monkey Designs Etsy store. It’s another old design that I decided needed some tweaking. I believe I even posted it here back when I first created it. 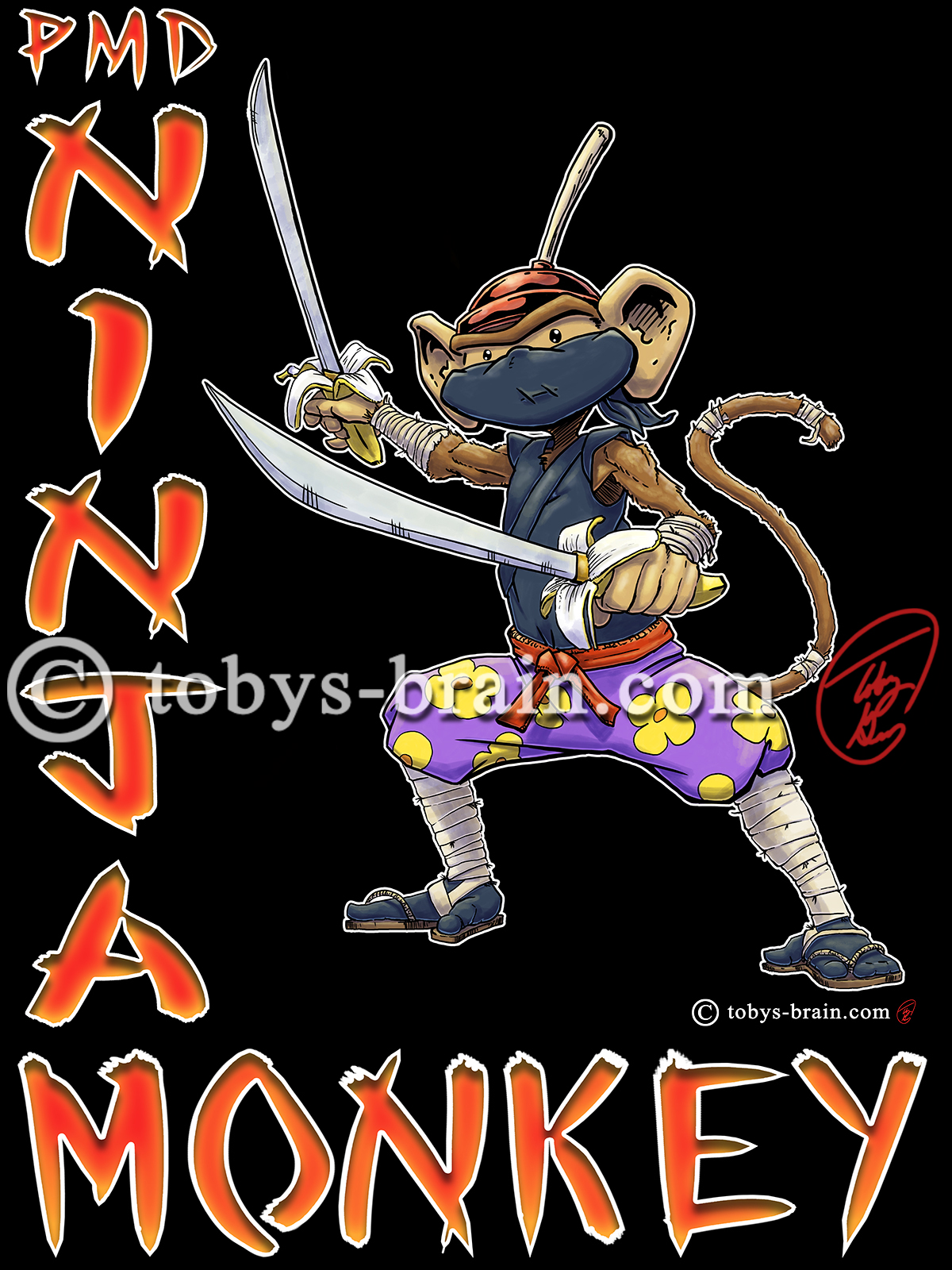 I still liked the image of PMD (I mean, c’mon. PMD as a ninja with banana swords? How can you NOT love that?), but the text bothered me. It represented what I was capable of at the time, but it looks lame to me now. Fortunately, unlike some of the other designs, I still had a non-corrupted, layered image file for this one. 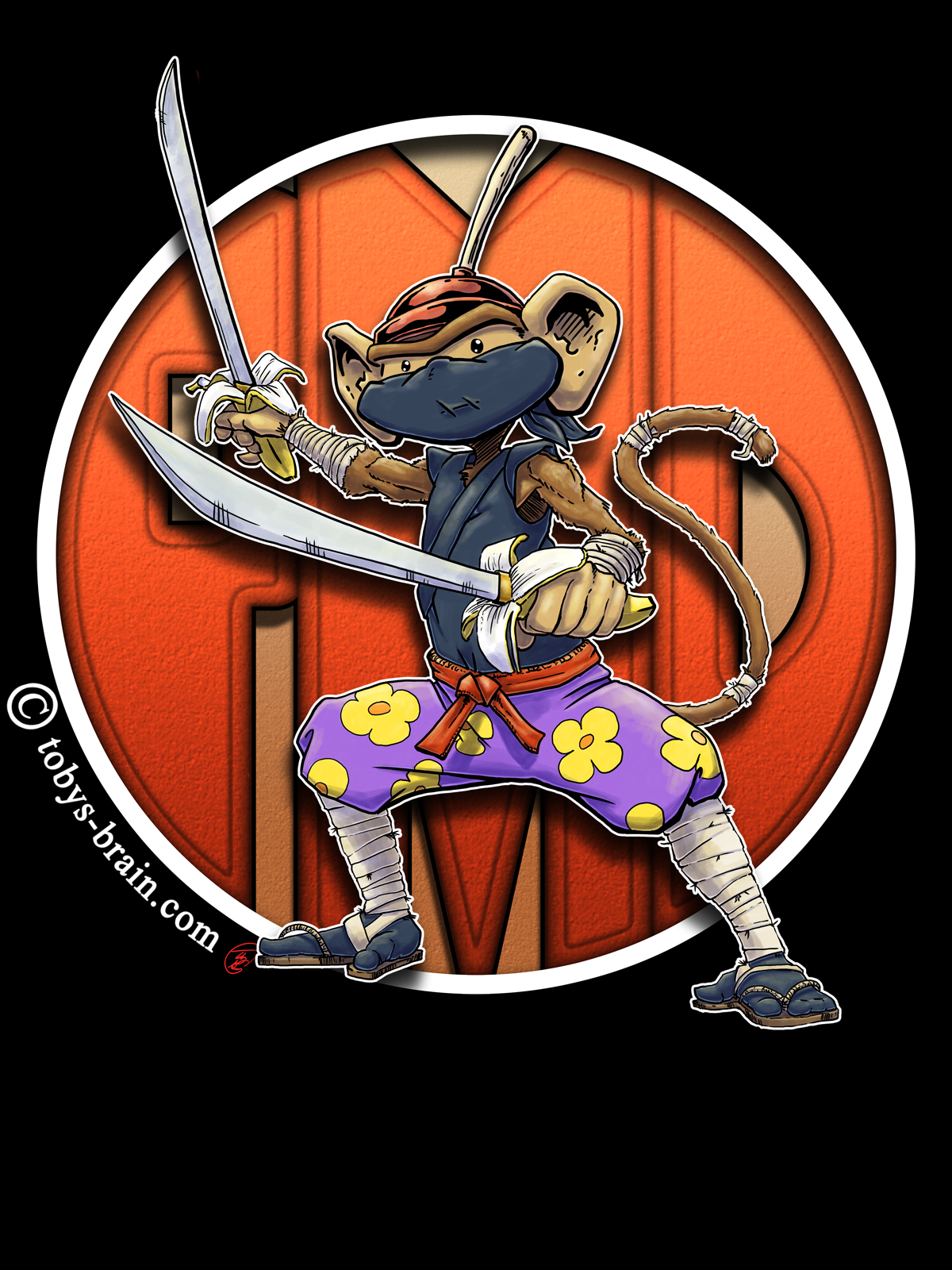 Here’s the updated version, now available to display on your torso. I’m much happier with this. There’s something about the circular design that I like for a t-shirt image. Maybe it’s all the super hero comics. The “PMD” inside the circle got some gears turning in my brain about some variations of just that bit. We’ll see where it takes me when I have the time to get to it.

So there it is, the latest shirt up for sale. Depending on what impact this storm has, I’ll either be returning to some IPMDT panels or picking up the sewing machine and finishing the Super Coat this week. Perhaps a little of both? We shall see. I’m really struggling with how close to done I was with the coat, I could see the end in sight! I really want to wear it out and about and go camping with it. But before any of that happens…I should probably go shovel…