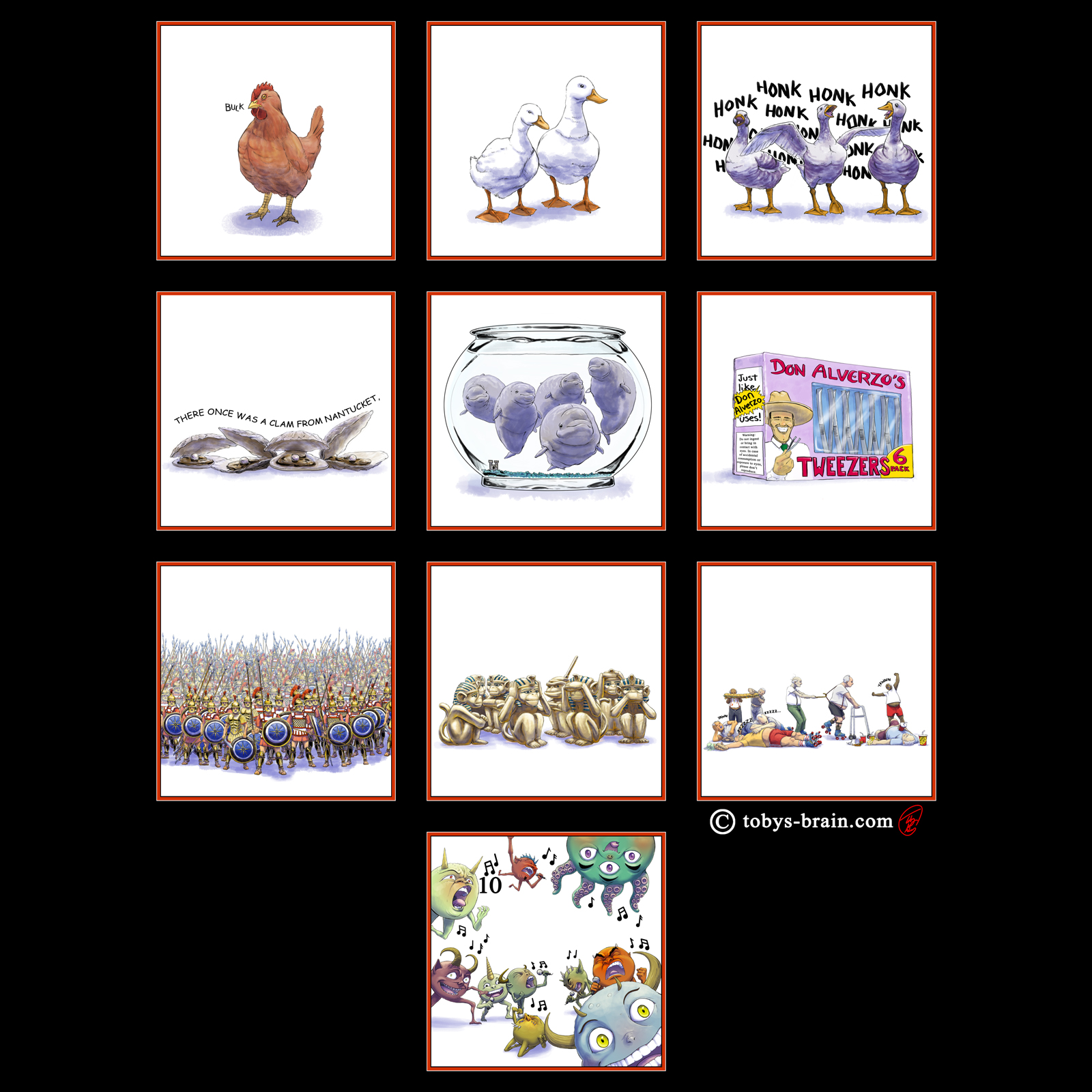 I wish I could say I came up with this design idea myself, but it was my middle son that inspired this. I was going through a gazillion variations for a 10 Things shirt when my son peered over my shoulder at my iPad and said “Oh, I thought you were going to do each page in a grid”, similar to the Faces/Emotions of Vader (or Chewbacca) shirts (I have them both). It’s brilliant. I originally had 10 Things written at the top, but my wife found it off-putting and thought it looked better with just the images. It took me a little bit, but I agree with her. My hope is that people will wear this shirt, others will look at it, and some of them will put two and two together (“…one hen, two ducks, three…Oh, I get it!”). We shall see.

If you happen to adorn yourself with this particular shirt, and you have folks come up to you and understand what this all is, please share the story with me, would you? You can either drop a note here on this post, email me at toby@tobys-brain.com, or leave a comment on the Toby’s Brain FB page. This applies to any of my shirts, but particularly this one.

That’s basically a wrap for now. This was the last shirt design I intended to list for the time being. There are still plenty of other ideas, some that are already almost ready to post, but, I need to move on to some other things, tackle some other goals (and I need to start selling more shirts, of course). I’m a bit behind my intended goals I set for this year, but overall it’s been incredibly productive for me, comparatively. At least, it feels that way. It may just be what I’ve been focusing on: products (the book, shirts) rather than “just” art. It may also be because I set some defined goals for the year down on (digital) paper. I’m still tinkering with that illustration I mentioned last week, the random one that I started in Affinity Photo and quickly moved to Affinity Designer once I realized I had an idea. I’ve spent much of this week distracted with other life responsibilities, so that didn’t get much attention or see much progress. I did manage to do some writing for It’s Plunger Monkey Dynamo Time and thumbnail out the next several strips. I had hoped to crank out a panel today, but I’m kind of out of time. I’m ready to go for next week, at least, so it’s possible there will be a new IPMDT by Friday. There will definitely be a post/site update on Monday (ooh, it’s a mystery!) with something else I worked on this week. I still need to make a bag and possible some other gear that I spend way too much time thinking about, but I’m putting some of that off because I have too many conflicting ideas, especially for the bag.  I need to commit to some designs and then figure out materials and supplies. It should be fun once I get over the mental hurdle I put in front of myself (I guess there’s a reason I loved running the hurdles so much in high school. I naturally put them in front of myself all the time, so it must be a comfort zone, having obstacles).