A bit longer in the making than I intended, but my first shirt offering of 2020 is finally done and available over at my Etsy store, Plunger Monkey Designs! 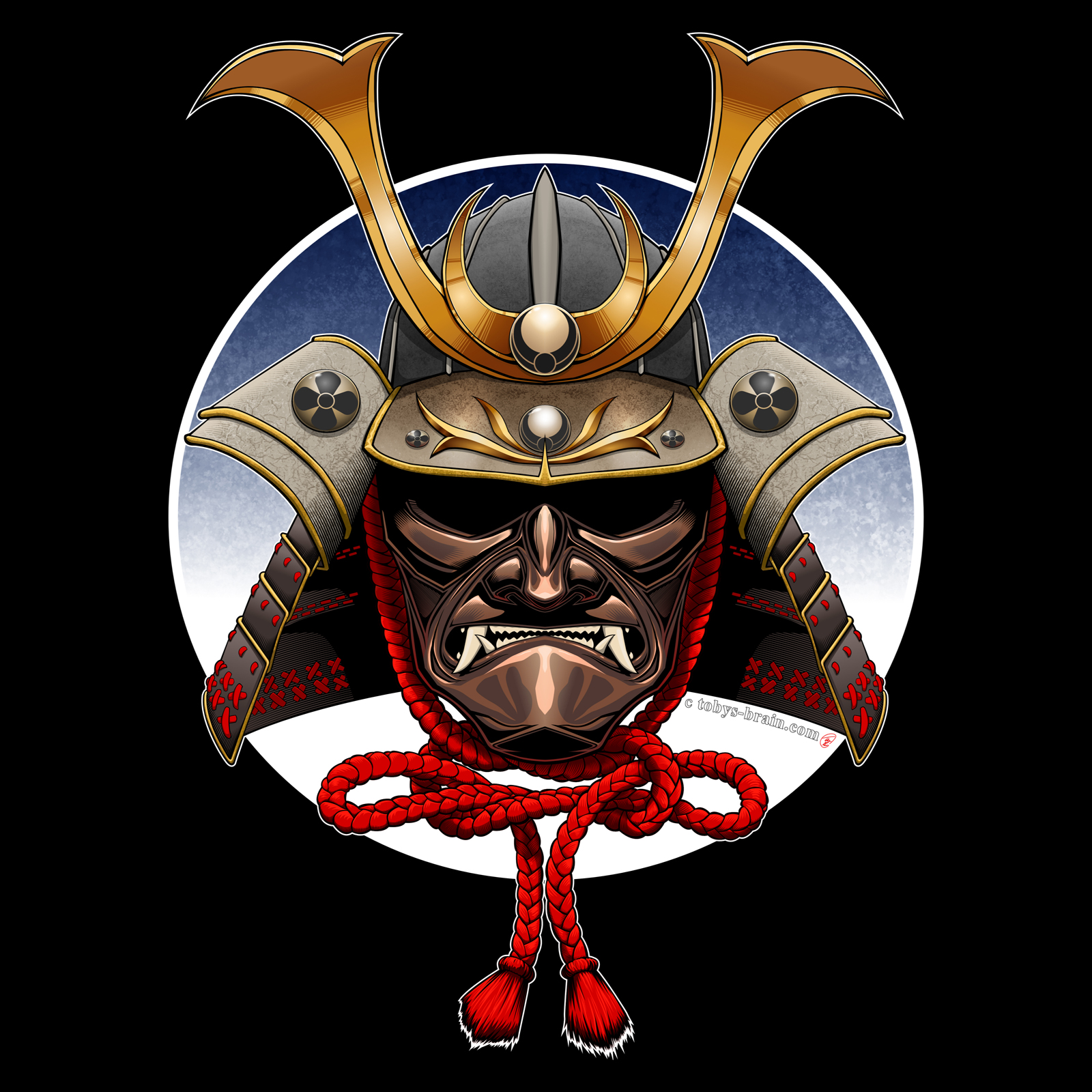 This started as a potential embroidered patch design for a karate friend’s bike club, but we went with a different image. I liked the sketch enough, and I had thought about a samurai helmet design before, that I turned it into a shirt (and potential sticker). This is another “theme” image, I have several other ideas to turn this into a series. I have always had a bit of a romanticized fascination with samurai and martial arts in general, and I have been studying karate diligently and dabbled in many other styles since 1995, but I know that historically there were a lot of darker aspects to that period of history and samurai culture.
However, the striking appearance and iconic nature of samurai armor is undeniable, and for all of it’s less pleasant aspects has come to symbolize some admirable values and virtues around the globe, such as bravery, discipline, fearlessness, and loyalty, in addition to martial prowess. The armor in general, and helmets in particular, could often be very unique and expressive, they were very much practical works of art.
This particular image is one of my own design, right down to the crests, and is not meant to be that of a particular samurai or family.

So why did this take so long? A lot of reasons, actually. I’m still familiarizing myself with the Affinity Design software (on my iPad) and creating vector art in general. It’s a different work flow and pace than raster/pixel based images. There are many ways to achieve a similar outcome, some are better than others for the desired goal, and I had to figure a lot of that out through trial and error as this is my most complex vector art so far. I tried a lot of different things out visually, then backed up and would try something a little different. I started out with a general idea of the kind of “style” I wanted to achieve, but part way through I found myself spreading out to different types of “visual language”. I liked the sharp, crisp nature of building up form with abstract vector shapes representing light hitting an object. I liked the bold and graphic black line work, hatching, and patches of black. But I also liked the subtle gradients and pixel-based textures.

After much internal back and forth, trying and then undoing things, and being paralyzed by indecision on the “look”, I just gave up and mashed all those ideas of a distinct “style” in my Brain together. This created a lot more trial and error as I tried to decide how to handle certain things like light and texture in each area. This is the result.

The next headache I ran into, once I decided to stick a fork in this design (cuz it’s done…), was trying to jam my Brain into the jar of “business guy”. My Brain does not like that jar. It’s a weird shape and it’s too tight a fit. I hemmed and hawed and finally decided to try out a different shirt brand. All my other shirts are printed on Anvil 980 unisex tshirts, which have been fine (though one of my dad’s blew out a seam, and I’ve developed some holes in mine, but most of those can probably be attributed to my macaws who like to chew on me). I have seen several positive reviews from other sellers about the Bella and Canvas line, so I ordered one for my wife when I printed her annual dragon shirt. It’s a nice shirt, lightweight, very soft, takes the ink well. Hopefully any customers approve, as well. Being the OCD type, I wanted to go and change all of my shirts to print on the Bella and Canvas shirts in order to be consistent across the board. Unfortunately, there’s not a quick and easy way to do that, unless I delete and re-list every design, which then loses all the sales data, customer feedback, and “likes” on my Etsy store. It’s not like I’m doing huge business here, but that stuff matters to me. So, for the time being, all the old shirts are Anvil, the new shirt is Bella and Canvas. If I happen to receive great amounts of feedback about shirt quality one way or the other, maybe I’ll go through the headache of changing things.

I have to admit, it’s still eating at me a bit that they aren’t all the same…

I also decided to start offering this design on both black and a dark heather grey (the sample I got for my wife was the latter, and it’s pretty nice). Again, though, same mental anguish about not offering the old shirts with the same option.

Anywhat, in addition to being able to decorate your torso with this image, I’m thinking this might be the design I use to test out a new product: stickers. I have actually had a few requests and inquiries about having my art available in that format, and the company I use to print my shirts now offers that option, so I think I’ll give it a shot. They should be more affordable than a shirt for potential customers, which is good. I’ve seen a bit of a resurgence in sticker demand based on other artists’ social media, so I might as well give it a try. I have plans for this image as well as some of my others to start out with, but I want to order some samples first to judge quality. I think they would look pretty good slapped on the deck of my snowboard, or perhaps on my helmet.

So, what’s up next?  Well, next up is trying to put together a little advertising for this shirt, getting those sticker samples ordered, maybe detouring into my next generation bag project (though I don’t think I’ve quite finalized a design yet), and getting back into the narrative stuff (IPMDT, Inside Toby’s Brain, and fleshing out some concept art for Revery so I’ll be comfortable enough to work on that again). Plenty to keep me busy amidst plenty of distractions. How long before I post here again? Unfortunately, I don’t have a schedule for that, as my own schedule refuses to be consistent due to life interruptions and poor sleep. I’ve been trying to stay more consistent with smaller updates on Face Book and Instagram, especially documenting the progress and process of this Samurai Helmet design, so if you crave more Toby’s Brain and that sort of content, you should definitely be following me there.

For the time being, go buy a shirt or two and tell all your family and friends to do so, too.