Well, it’s not Monday, but I’m finally getting around to this here blog post in conjunction with the next shirt available for purchase. I made a bunch of little tweaks to this one, which started out looking like this: 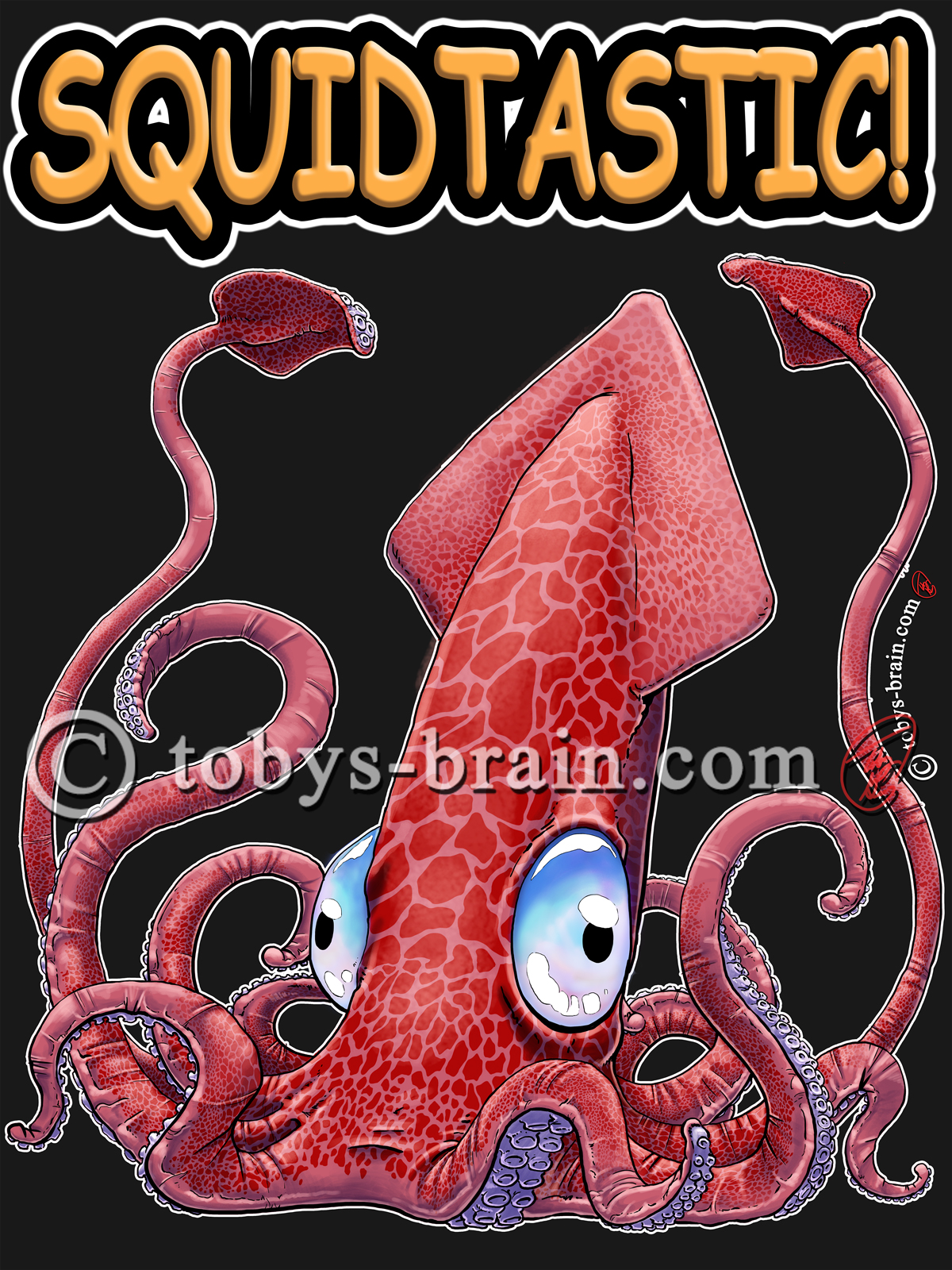 This is the Multi Purpose Novelty Squid. I was fairly happy with this rendering back when I made it, and it holds up reasonably well to me now. I never really liked the text, though, and overall it just seemed to be missing something. 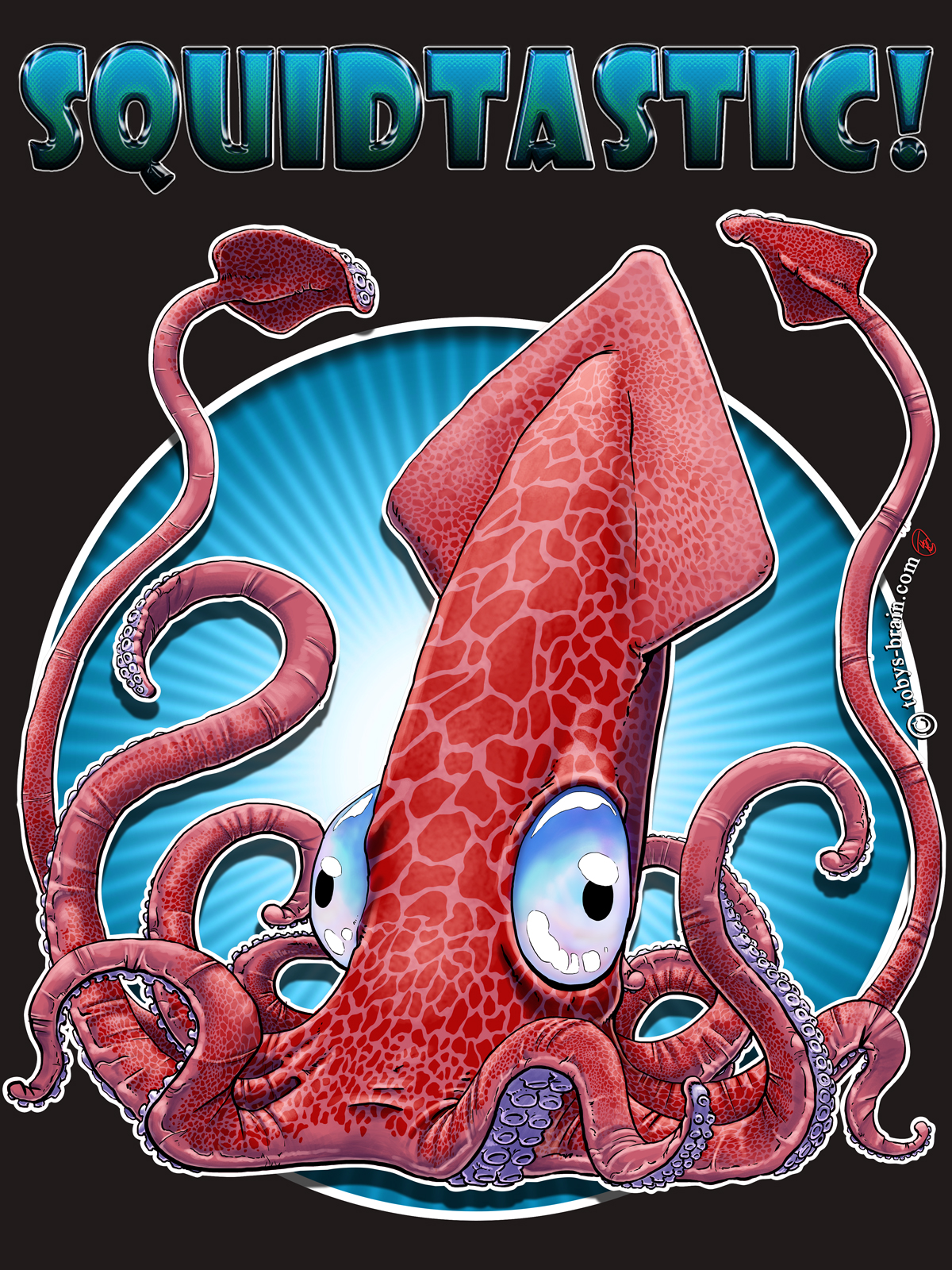 The re-envisioned Multi Purpose Novelty Squid shirt! I apparently have a thing for circles on torsos…most likely superhero comic induced. The colors work much better together than the original, and I’m happier with the overall composition.

The new version just pops more for me. And, you know, circles. I can’t even tell you how many hours I spent mucking around with subtle variations to the text effects and that circle, it ate most of my studio time this week. That and doing some housekeeping for the Etsy shop. I noticed there were a few little edits I needed to make to some of the listings, which unfortunately is a bit of a tedious process due to load times (you folks living where you actually have super high speed connections have it good in that regard. I’ll still take my mountain, my trees, and not being able to see a neighbor’s house every time, though). I also decided, due to popular demand (meaning two whole people mentioned it), to offer some youth sizes. Right now, it’s just for Plunger Monkey Universe (PMU?), unless there’s a clamoring for some of the other designs. I figure PMD and friends might be more successful among the younger generations anyway, and if I can get a handful of kids wearing a PMD shirt to school…

I’ve also had a few people say something about women’s sizes (one of those being my wife), but I think I’ll have to wait until I start selling more shirts to justify it as the current style is supposed to be unisex anyway (despite what it says on Etsy when you try to select a size. I can’t seem to find where to change the designation from “men’s shirt size to something accurate-it does it for the youth sizes, too).

I’ll share the little blurb bit I wrote to go along with the shirt posting:

I like squids. Just about as much as monkeys, in fact. I’d venture to say that squids are the monkeys of the sea, and monkeys are the squids of the land. Aside from being amazing and alien creatures, the word is just plain fun. The Multi Purpose Novelty Squid is sort of a character from Plunger Monkey’s universe that randomly popped into my head in a similar fashion to PMD. In fact, if memory serves, I drew them both on the same day, on the same giant sheet of paper taped to someone’s studio wall. The MPNS has made appearances on cards I’ve made over the years, envelopes, and other random doodles. It is currently the thing that PMD and I are questing for in my web comic It’s Plunger Monkey Dynamo Time.

If you have ever corresponded with me, you have likely at some point received a communication either titled or signed “Squid”, or some derivation of it. I’m not sure why it’s such a fun word, but it is. Monkey is another fun word, in addition to being a fun animal, and I have, at times, combined them into the epic Squid Monkey. I wish I could say I was the first or the only person to ever utter that compound word, but a quick Google search proves otherwise. It was almost the name of my Etsy shop and/or my pseudo publishing venture. I may still try to make it a character, at least, though one probably already exists.

Anyway, hopefully I still have time today and tomorrow to get some actual arting in, rather than “business” or “life” stuff. I was just realizing I haven’t actually drawn on the iPad in a while, nor have I gone to make art up in the Zen spot. I’ll have to rectify that.