Alright, short on time, so just a quick-ish update. First off, in reference to the title of this post…you probably had to be there to appreciate it, but, many moons ago, my best friend Jorj and I were fresh out of college, trying to find something to do with our lives and our art. We decided to start planning the ultimate video game that mashed up all the different genres of games we loved. We were tossing around story ideas, and then characters and monsters. We were trying to come up with a list of names and sort of work backwards to design the creatures. It was a long day, and at some point, we were stumped. We couldn’t come up with another name. That is, until, one of us suggested, tentatively…MacDougal? We exploded into fits of laughter because it simply didn’t fit. But that didn’t stop every character/creature from that point on until we gave up being named MacDougal, nor did we laugh any less each time one of us said it.

So yeah. You probably had to be there…MacDougal.

Anywhat, to the actual meaning of this post title: for the first time in a long time, I filled a sketchbook cover to cover. 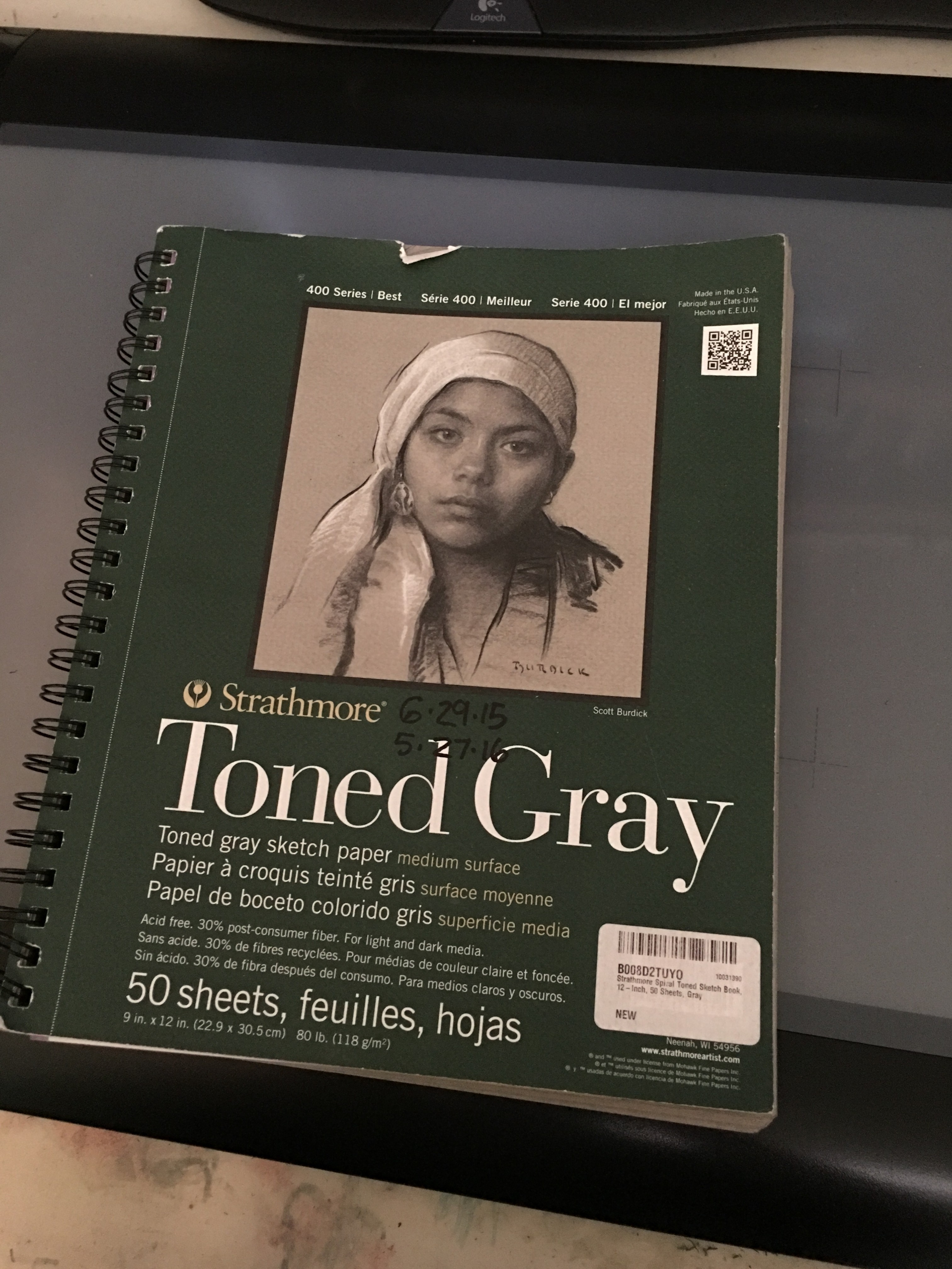 Toned Gray, the sibling I never had.

I can’t remember the last sketchbook I “finished”. Well, I guess that’s not quite true. Back in 2010ish I finished an old sketchbook (that I probably hadn’t cracked open in a decade or so) when I was thumbnailing out Revery (which spilled over into a new sketchbook…which bothers me because of my OCD/must organize things mentality). Lee gave me this sketchbook for my birthday last year, and after a few sporadic doodles in the first few months (I was working heavily on some digital pieces), I turned to it to work on the whole Inktober challenge, which evolved into my own continuing ink/self-portrait project, which lead to It’s Plunger Monkey Dynamo Time! finally coming together. I had seen another artist (I think Jake Parker, the guy who started Inktober) write a start and finish date on his sketchbooks, so I think I’m going to start doing that, too. I think it may serve as a subtle nudge to keep drawing regularly.

Anywhat, I have some other miscellaneous things to post, but no time today. I have the finished camp shirt design, as well as a slew of custom logos I made for my nephew’s birthday because he loves logos. I got the go ahead to start reworking/expanding the 4th cover I did for The Witch Series, which is coming along slowly (because of time this week) but nicely. I want to finish up 10 Things this year, maybe even the PMD version. I need to work on some digital paintings, because it’s been a while. I still need to do the boring stuff to get the t-shirt Etsy shop up and running (that’s a big goal for this year). There’s still Revery waiting in the wings, which I’m even more eager to get to since I’ve been somewhat honing my skills while working on It’s Plunger Monkey Dynamo Time!. I’m also really itching to do some kind of mixed media work involving my Copic Multiliners, Copic Greyscale Markers, some water colors, and colored pencils (I have a nice set that I got just before I switched primarily to digital so I’ve only even sharpened, like, 3 of them). Not sure what the image/subject will be yet, but I really want to play around with that process.

Alright, my time is up. If you are a fellow U.S. citizen, have a great Memorial Day, be sure to take a moment to remember those who have died serving our country.