Finally! Time to go BACK to Braining!

Finally! Time to go BACK to Braining!

However, I have been keeping rather busy. Aside from all the standard life and scout related obligations, I spent the bulk of the first 3 months of 2019 (how the heck has it already been 3 months?!) finally trying to tackle some big goals that I’ve been avoiding, tasks that I have been referring to as “braining” (business stuff), as opposed to “Braining” (being creative and manifesting all these things running around my skull). I don’t try to hide the fact that the financial, administrative, and business aspects of being an artist are not my strengths. There’s a lot to all of that that I don’t understand and I have a hard time wrapping my head around even after researching and talking to folks. It’s new. It’s foreign. It’s alien. It’s not drawing the things in my head. However, I finally got to a point where I was sick of having those steps hanging over me, preventing me from taking some other creative steps.

I have long known that some of the creative goals I have are rather big in scope, and to do them right and hopefully leave a mark in the world, I would need to jump through certain hoops to protect myself, protect my intellectual property, and give myself a greater chance of success. I knew those hoops would be painful for me (like, flaming hoops that are too small for me to fit through, with broken glass in the landing area), as my brain stubbornly fights operating in that realm. I also knew that I just wouldn’t be able to focus on the business stuff and make art at the same time. The switch between those two halves of my brain is broken, I get the “blue screen of death” when I try and I have to go through a lengthy reboot process to switch tasks.

The good news is that, as of finishing this here blog post, I think I’m done with the most painful “braining” stuff, and from here on out, at least for a while, that stuff will be in maintenance mode.

I will now officially be able to operate as Toby’s Brain, LLC. I’ve got a business bank account associated with that and acquired an EIN for it. I have two official Trade Names or Imprints I can produce and sell my art through in addition to the LLC, in order to keep things organized: PMD Press (for books, graphic novels, etc) and Plunger Monkey Designs for my shirts and other accessories (which will be coming eventually). I filed my first copyright paper work, purchased ISBNs and barcodes, and published my first book: 10 Things. I decided to use a new print shop for my shirts and spent a week setting all the connections up with Etsy and moving my images over without messing with the actual listings on Etsy, which lead to my finally making the last Parkour Bobcat design available.

I was originally going for sort of a “team logo” sort of feel, but it evolved into this.

The website has received a slight face-lift in terms of appearance and functionality. I’ve edited together a bunch of bobcat footage taken in the 4 months since I shot the now viral video, which I will post as soon as I have a window to do so (I live in the boonies with poor connection compared to city folks, so when I try to upload a video I kill our connection, which kicks my wife offline and she’s the one actually working the real job and earning the real money to support us).

I’m sure I’m leaving some other odds and ends out, my brain goes kind of foggy thinking about it all. But, now it’s time to look forward to making some actual art again. I want to start cranking on Inside Toby’s Brain and It’s Plunger Monkey Dynamo Time. I’ve got over half a dozen shirt ideas to get to work on, some of which involve simply tweaking some of my existing art, and of those I really think there are a few that have the potential to be big sellers if I can get myself noticed. I also plan to start working on Revery before the end of the year (the original goal was June, but the business stuff took longer than I expected, so that goal post might shift). I’ve also got a few PMD app ideas that I might start spending some time thinking about, but that will depend on involving someone else. Another project that is a ways off still is a Plunger Monkey video game. I know there are a lot of free or cheap tools that folks use to create indy games, it’s just a matter of learning a new tool and devoting the time (but man, the ideas I have for this game…). My brain is exploding with some non-art stuff I want to make, as well. I was able to make an awesome wool coat in January,- 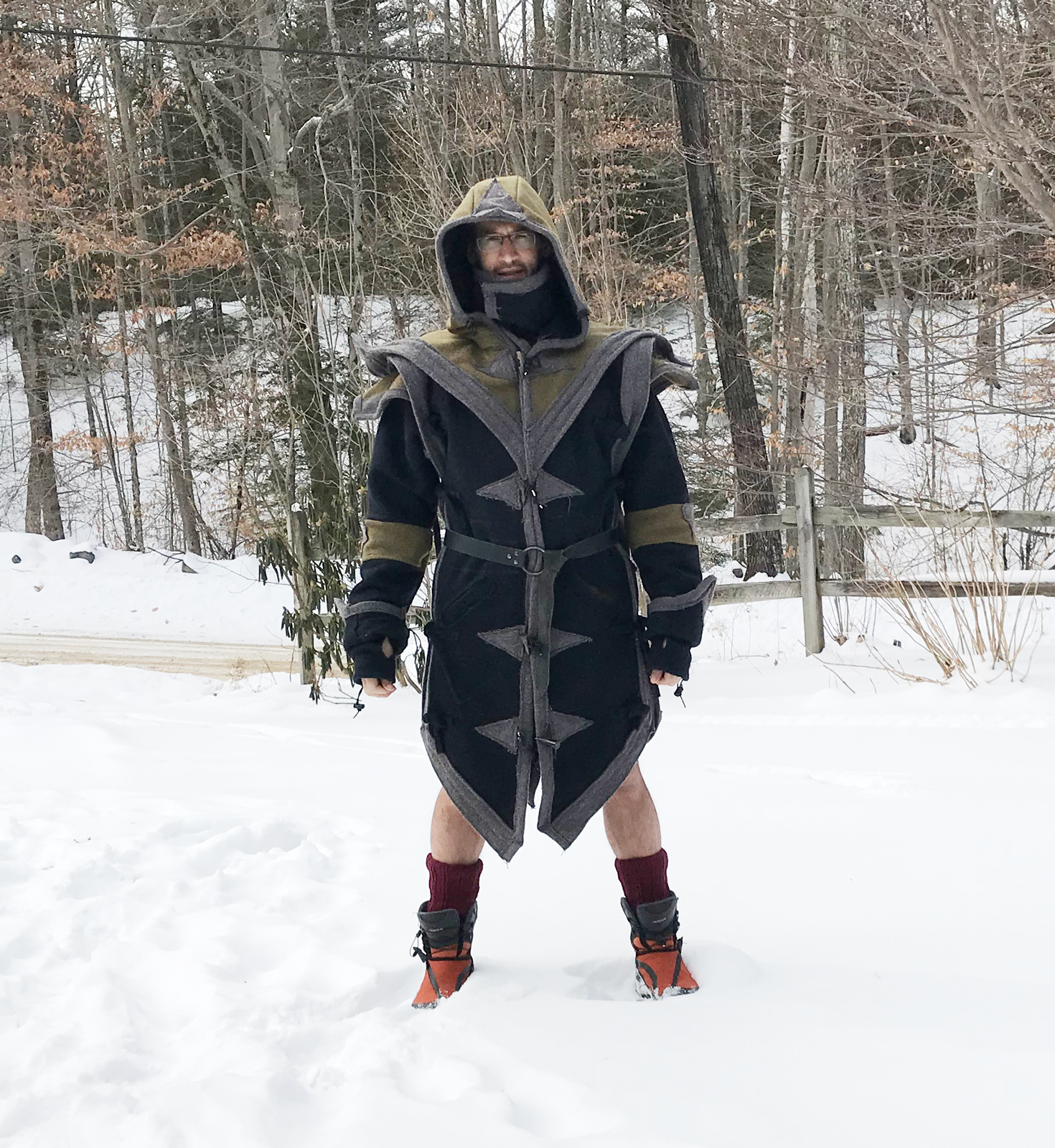 My wool “tabbard coat” is so awesome, I don’t need pants…not that I usually wear pants anyway…

-but I have a few other wool ideas (like a multi-function blanket poncho that can be worn half a dozen different ways and can convert into a sleeping bag), some water/wind proof shell ideas, an expandable carry-all everyday bag (which I’ve been dreaming up for years), as well as some fun survival toys, which some of those things I might look into either mass producing or making a few for fun here and there and selling on Etsy.

It’s great to have so many ideas to keep me busy, the tough part, as always, is choosing what to focus on right now. While I figure that out, go ahead and check out the links scattered throughout this post, or the ones on the main page. Go get yourself a copy of 10 Things 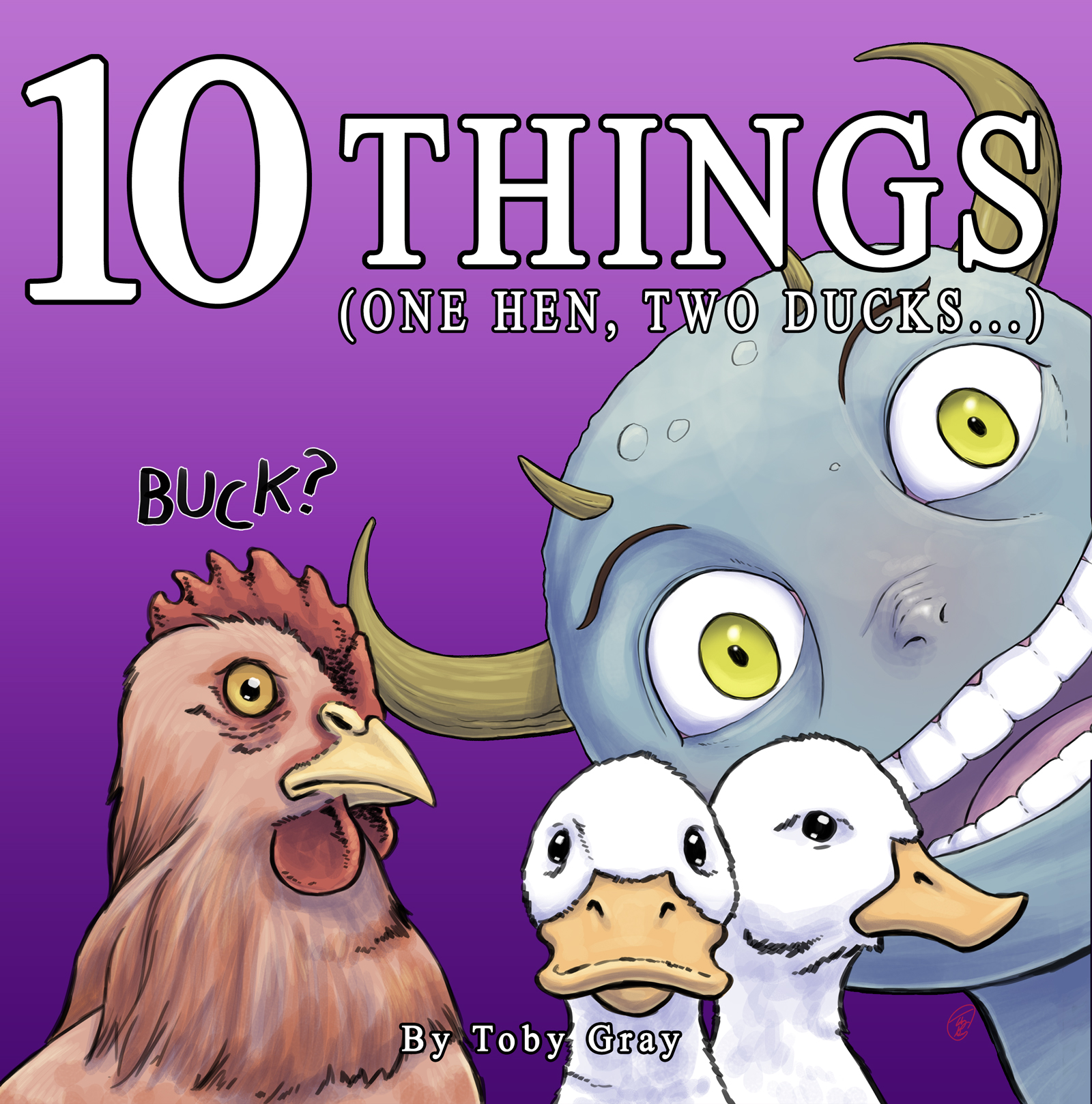 I’ve been teasing this book for YEARS, so everyone definitely needs a copy now, right?

and grab a shirt from my Etsy shop to spruce up the ol’ torso. If you’ve already done either of those, I thank you for supporting my crazy dreams, but you can help me out even more by spreading the word. I do my best to promote myself here and through my various social media presences, but I’m just one person. Marketing and promoting can be a full time gig in it’s own right, so I am reliant on the kindness of others to tell people they know to check my stuff out. Invite everyone you know to my Brain!